On this page of the guide to Total War Warhammer 3 you'll learn how to start a campaign with the Seducers of Slaanesh commanded by N'Kari.

N'Kari leads the Seducers of Slaanesh nation. Their early game is quite strong, as they start at the very top of the map in the corner. That means you have nothing to fear from the north and the west. 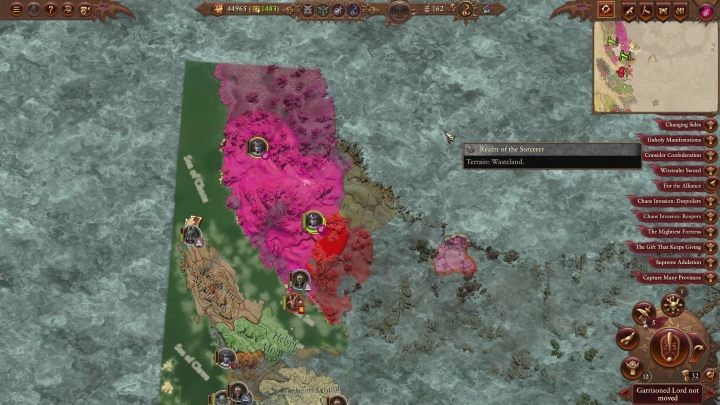 From the very beginning of the game you are at war with the neighboring Norsca clans. Take over two of their provinces closest to you. They'll probably want to negotiate for peace but you shouldn't agree. These areas are rich in strategic resources - gold, iron and marble.

From the south, across the sea, you share a border with a peninsula more Norsca clans call home. They're perfect to use Seductive Influence against (we've described it in more detail on a separate page - Unique mechanics) and to eventually dominate - you can never have too many vassals.

After capturing the first two provinces you'll have to make a choice. You start off the game at war with the Khorne faction led by Skarbrand the Exiled. This legendary lord most likely kept out of your affairs for now, but now that you border him he might be problematic.

You can pay him off and make peace with him to take care of other things. We recommend continuing the war though, as eliminating an enemy this strong early on can save you a lot of trouble in the future. The choice is yours.

If you decide to continue the war, remember Skarbrand is extremely powerful. He'll be trying to face you in direct combat and can hold his own against several squads at the same time. Slaanesh units don't have much armor so the war might be difficult. At this point you should have three armies. N'kari and his army should head to the demon realms, as the first rifts should appear there around this time. The other two should attack Khorne.

Behind your hated enemy you'll find another Slaanesh nation you can form a confederation with.