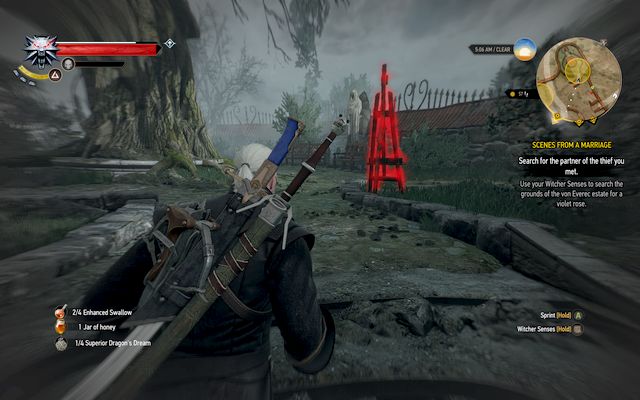 Check the common objects near the mansion

As part of the quest, after completing the Open Sesame! - part II, you will be sent to immediately report to Olgierd in the abandoned mansion on the east (M1,19). After reaching the destination and examining the marked objects in the garden, walk to the front door. You will notice a broken lamp and the trail leading from it will guide you to the back of the house. There you will have to face the boss - Caretaker. 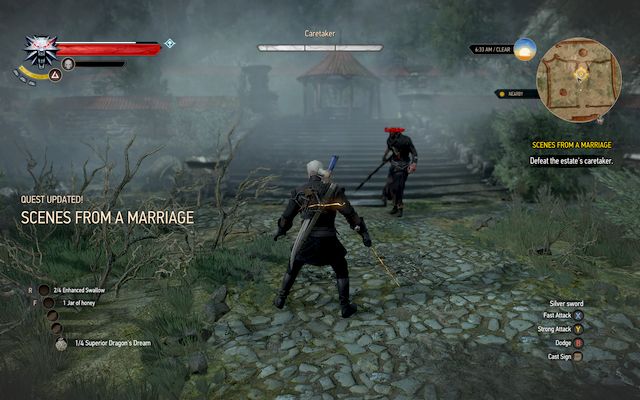 The key to victory is using only the sword, potions (like Thunderbolt) and Quen sign. Other signs - except for Igni, which will have a very low effectiveness - won't work. You can forget about the bombs as well.

Battle strategy: simply avoid the attacks (you can also parry them, but it is not recommended) until the enemy will perform a special shockwave attack. After that, his weapon will be stuck in the ground and you will have time to perform 4 strong attacks after which you must perform a dodge. Sometimes enemy will charge, you must dodge it. Don't attack after that attack, the enemy will quickly regain combat effectiveness. Watch out, as each damage you receive regenerates enemy health (unless you have activated the Quen sign). 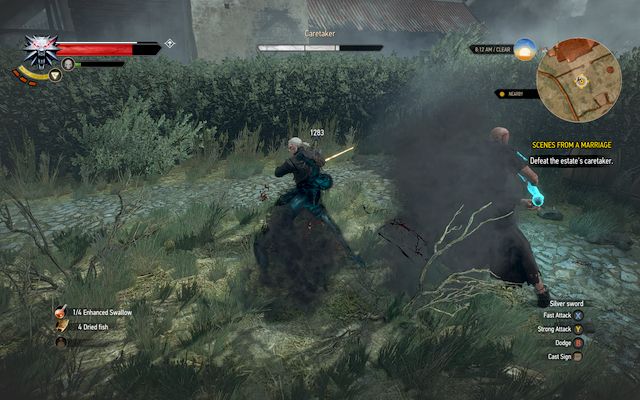 When you take about 1/3 of his health and later after you take half of it, the enemy will summon ghosts of the dead. They will be neutral, but the enemy will be able to regenerate his health by killing them (with one hit). Because of that, you must be first to eliminate them, preferably with the crossbow. You can help yourself with the minimap on which the ghosts will be marked. During that time, the boss will take no interest in you, but he will be also immune to your attacks, which will immediately push you away.

After the battle will end, a dog and a cat will walk towards you. After a conversation you will receive the key to the house from them. You should also pick up the weapon of the caretaker - The Caretaker Spade, which, in addition to the large amount of damage dealt, also heals you with 10% of damage you deal with it. 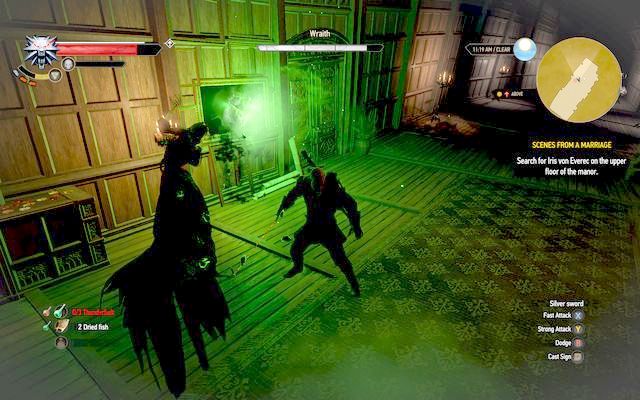 The Wraith of the Painting

Once you're in the building, go to the first floor. There, after walking through the balcony, you will face The Wraith of the Painting. The battle isn't hard - attack the opponent with quick attacks, helping yourself with healing potions (or food) and Quen sign. The wraith will be healing itself by using the paintings - when that happens, you will notice that the portrait is glowing in green. You must quickly interrupt the process by attacking the object. The ghost will always manage to regenerate itself a bit, so it is important to quickly finish the battle. Since the enemy doesn't attack often or strong, it is wise to focus only on the offensive.

Once the battle ends, walk to the next room, which is a bedroom in which you will find the body of Iris von Everec. Examine the corpse and walk outside. Go left, to the wall, and you will find her burial site. After summoning the ghost you will be transported to a painted world. In this world your main task will be to fill the scenes with missing objects that can be found nearby. For repairing all the scenes with missing elements you will receive the Curator of Nightmares achievement/trophy. 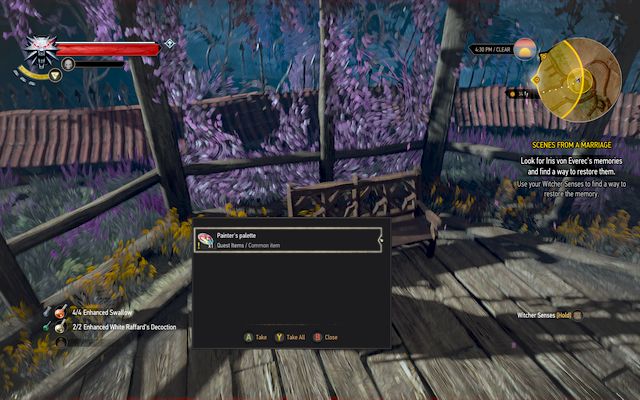 The first scene that you will see is Iris at the easel and Olgierd sitting on a bench. You must supplement the scene with two objects found on the balustrade of the gazebo - painter's palette and a book. Place the palette on the table near Iris and give the book to Olgierd. 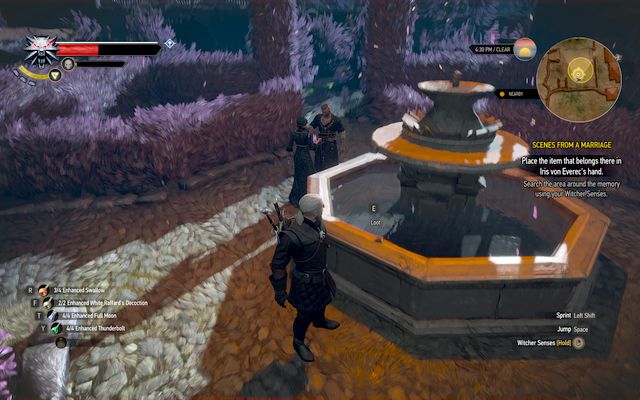 The glass which you will put in Iris' hand

Now, walk down to the garden. On its right side you will once again find the pair of lovers, this time at the fountain. You don't need to explore the other parts of the garden as there is nothing there except for spiders. Pick up the item lying at the fountain - the glass - and put it in Iris' hands. After that scene you will face four smaller spiders and their mother, but she is not a boss. 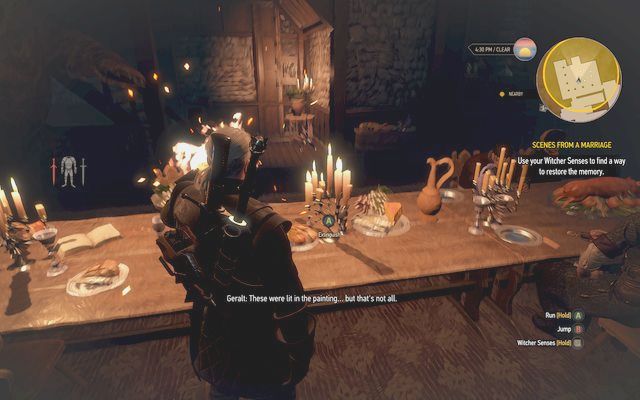 Light the candles on the table, but only two of them

The next scene is a feast inside the building. Examine the large painting at the wall, it will give you hints as to what you are supposed to do. Ignite the fire in the fireplace (interaction or Igni sign) and light the candles on the wall. However, don't light all of them - only the two at the fireplace side (next to which the banqueters are sitting). Now go to the floor. There you will find another scene to finish - pick up the bloody towel from the ground near the bed and place it on the table next to Olgierd. 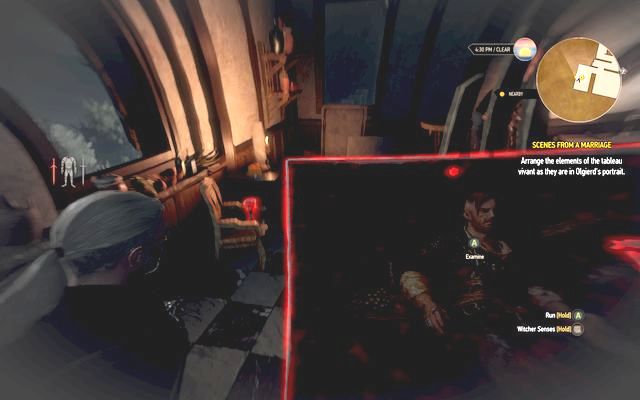 Walk to the neighboring room. You must position the composition of still life in the same way as it is shown on the portrait made by Iris. Pick up the chalice lying on the left from the easel and the bowl of fruits behind Iris and place it on the table near Olgierd: the apple on the right side, the grapes on the left and the chalice in the middle.

During the next scene you will find yourself in Olgierd's workshop. Pick up the candles at the window and the chalk on the commode. Finish the pentagram on the ground. The candles must be placed inside the pentagram's circle. After the cutscene you must get out of the burning house - you will do it by using the painting on the wall. 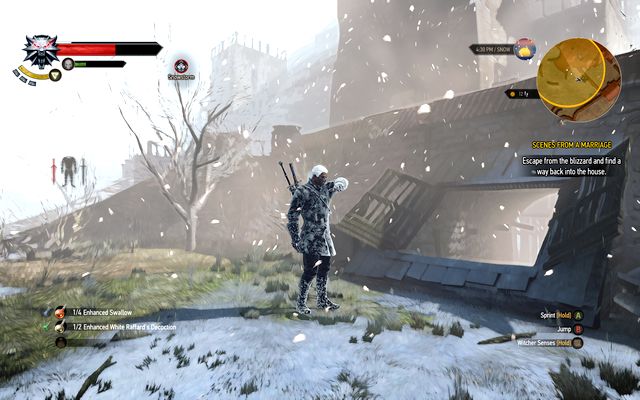 Now you're outside the building, in a blizzard that is hurting Geralt. Enter the building through the entrance to the basement on the right side from the stairs to the wall. On the floor you will find the Marriage contract which you will give to the standing father and a cup that you will give to Olgierd.

In the room on the floor you must pick up three items: large bowl, small bowl and a tray with food. Give the tray to the caretaker, the small bowl to the cat, the large one to the dog. Go to the last room in which you will find a letter on the table. Before you pick it up, make sure that you are ready to battle: fix your weapon and meditate in order to replenish your potions' supply. 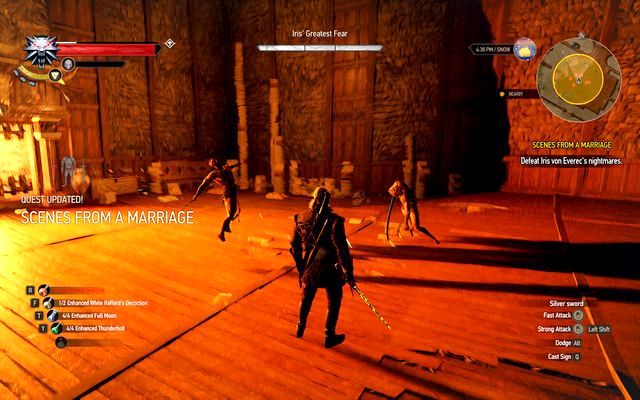 The battle with "Olgierds" - the final two will be the worst

Now you will have to fight Iris' Greatest Fear, a ghost of Olgierd which has his fighting style. You will notice many opponents, but despite that, fight calmly - if you won't provoke them, only after killing one Olgierd another will join the fight (the health bar is common for all monsters). Because of that, during the 1 on 1 duel, avoid using bombs and signs (only Quen, especially since the rest aren't effective anyway). During the battle, keep parrying the attacks and, when the enemy will prepare to perform a powerful hit, block it before it hurts you, which will throw away and temporarily stun him.

If you provoke other enemies and will be forced to fight few opponents at once, Lunar Dust and Dimeritium Bomb will be very effective. Enemies are completely immune to fire. Try to avoid performing too long combinations, as this will make the enemy throw the sand into your eyes. If you are stunned with a scream, perform a quick jump away and start the counterattack. The two final opponents are slightly stronger - they can perform an additional quick attack from distance and they will parry most of your attacks. The battle will end once you defeat the last opponent (the health bar will still have around 10%). Important - the hardest approach, which is fighting all opponents at once (simply hit each of them so that they join the battle) is rewarded with the When it's Many Against One... achievement/trophy. 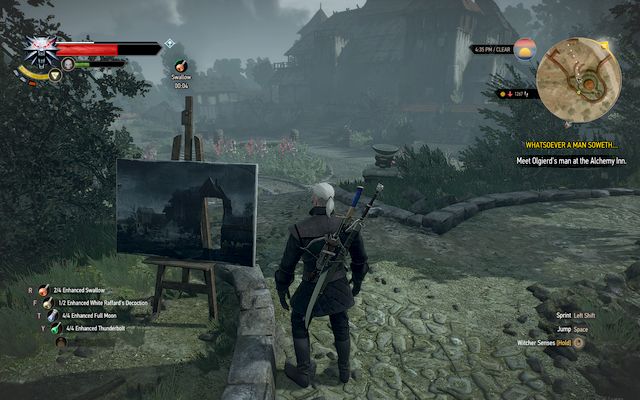 If you won't take the rose from Iris, you will take a part of the painted canvas

Once the battle ends, you will be able to speak with Iris. You must decide whether you will take a rose from her or you will leave her in her world with the flower. The choice will impact a short scene at the game ending, where you will give the rose or the canvas on which it is painted to Olgierd. No matter what you choose, both options will lead to a successful completion of the quest.