This page of the guide to The Witcher 3 Wild Hunt includes a walkthrough of the side quest Unlucky's Treasure. This is the only treasure hunt quest (minor optional quest) related to the Northern Islands of Skellige. In the walkthrough, we explain where to find the lair of the mighty archgriffin, and where to find the treasure after defeating this beast. 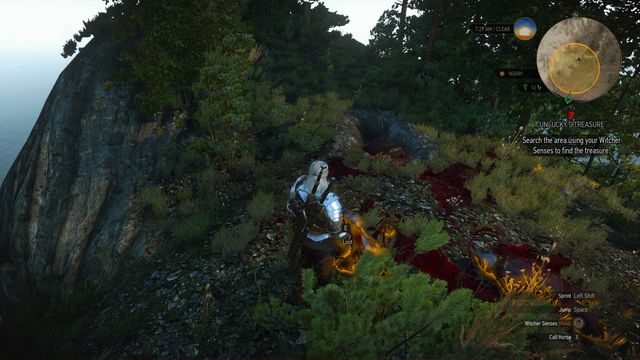 Treasure chest can be found near the bodies of two soldiers.

Go to the island on the South-East of the map (M16,1). Climb to its top. Beat the archgriffin on level 48. It's one of the most powerful enemies in the game so it is wise to wait until you reach proper level and skills.

Take a key and a note from the griffin's nest. The treasure hunt quest should automatically start. Read the document you have found. Territory where the treasure can be found will be marked on the map. Luckily, it's nearby. Walk with the witcher senses activated. Look for a small hole in the ground and for two dead soldiers. You won't find anything very valuable in the chest.