This page of The Witcher 3 Wild Hunt has a list of Gwent opponents. This list can help you defeat 100% of the players. We have also prepared a list of the cards from the basic decks that can be won or bought. 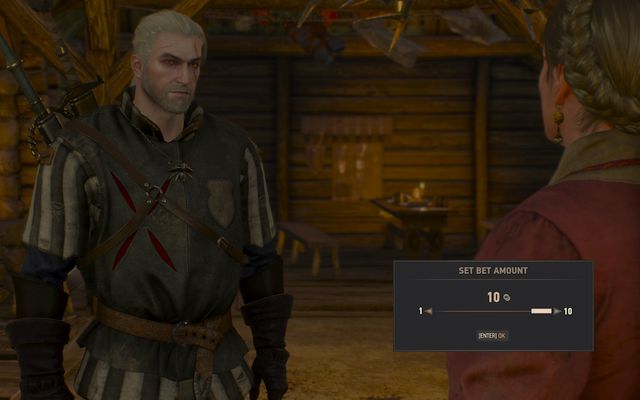 You can play with innkeepers or merchants

Most of your opponents are merchants and traders, so you will find many of them in Novigrad.

Second opponents group are found during quests, they are specific characters found in specific places.

With common opponents you play for cards - each unique game won allows you to win a random card from a random faction. The key to play in quests is collecting a strong deck.

In addition to standard Gwent games against merchants, there are some tournament games with stronger opponents in which you can win unique cards.

Gwent: Collect 'Em All - first quest that companies you for most of the game. It's about collecting all possible cards. You can have more than one piece of some cards - in this quest you must have every card, especially the unique ones. The number of cards, including the repeated ones, is limited. To collect all of them, you must complete all quests related to the card game and defeat most (not all) "standard" opponents (innkeepers, merchants). When you no longer are rewarded with a card after the game, then it means that you have all non-unique cards.

Gwent: Velen Players - players from northern part of Velen. It's the first phase of the tournament games. You start it with a game with Bloody Baron and you have three more enemies to defeat in villages. After winning with Baron (Northern Kingdoms deck, Sigismund Dijkstra card), win with the boatbuilder in Oreton (Nilfgaard deck, Letho card) and fortune teller in Benek (Monsters deck, Weavess crone card). Once you defeat any of them, you will unlock access to playing with Hadek in Midcopse (Northern Kingdoms deck, Vernon Roche card).

Gwent: Big City Players - you receive this quest after talking with Vimme Vivaldi in Novigrad. You have total of four opponents. After winning with Vivaldi (Scoia'tael deck, Vesemir card) go to Marquise Serenity (Nilfgaard deck, Moorvran Voorhis card). Your next opponent is Dijkstra - you will be able to play with him after advancing in the storyline (Northern Kingdoms deck, Esterad Thyssen card). Last opponent is elven merchant in Farcorners (Scoia'tael deck, Cirilla card). For completing the quest you will also receive commander card Francesca Findabair, the most beautiful woman in the world.

Gwent: Playing Inkeeps - continuation of the previous quest with Gwent players in Novigrad. You must win with three opponents in different places. First win with Stjepan in the inn in Oxenfurt (Nilfgaard deck, Yennefer card). Then the inn owner in Farcorners (Nilfgaard deck, Menno Coehoorn card) or available at this point Oliver in Novigrad's inn (Monsters deck, Tibor Eggebracht card).

High Stakes - Most prestigious tournament in which you will have to defeat four opponents in a row to complete it successfully. 1000 crowns and a strong enough deck will be required to enter the tournament. First opponent is Bernard Tulle (Northern Kingdoms deck, Foltest card), second is Sasha (Nilfgaardian Empire deck, Emhyr var Emreis card) and automatically another opponent Finneas (Scoia'tael deck, Francesca Findabair card) - after the battle with this opponent a fist fight for life or death will start. Last opponent is Count (Monsters deck, Eredin card). You won't receive money for winning, unless you continue the plot...

Once the money is stolen (you can't avoid that), together with Sasha examine the balcony. You will find a bolt. Then, near the fountain below, a tape, which smell will lead you to a chest. Meet with the girl in the docks, near the warehouse - entrance is through the first floor, from the northern side. Defeat 6 enemies inside (level 26-27). You will receive 4500 crowns.

Gwent: Old Pals - this quest becomes available after completing the main plot in Novigrad (saving Dandelion). Your first opponent is Zoltan (in front of the Rosemary and Thyme inn) (Scoia'tael deck, Eithne card). Then win a card from Vernon Roche in his hideout (Northern Kingdoms deck, Seasenthessis card). Then, when you have a chance (during the quest in Novigrad or in Kaer Morhen) play with Lambert (Scoia'tael deck, Triss Merigold card).

Important - Thaler is part of the list above as well. You rescue him during the Plot quest. But if you complete the quest above before you save Talar, playing with him will be still possible later, in a separate quest about playing only with him (Scoia'tael deck, Geralt card).

Gwent: Skellige Style - you will find an announcement on the notice board in the village under Kaer Trolde fortress. You must complete first main quest Echoes of the Past to start it - that's when you meet the first opponent, Mousesack (Monster deck, Leshen card). After him, you can challenge Crach an Craite (Monster deck, Draug card) and Gremist (Nilfgaard deck, Mysterious elf/Avallac'h card). After winning with Crach, play with Lugos (Monster deck, Katakan card). For completing the quest you will receive Emhyr var Emreis card).

Cards that can be obtained during unrelated quests with Gwent

Not all cards can be simply bought or won. Some can only be obtained by completing side quests.

Some innkeepers (and much more common merchants) can sell you cards. Those are not unique cards, but they aren't random as well - you will find mediocre cards and leader cards in their offer. Below you will find a list of cards that can be bought from various merchants.

The list below contains lesser players, such as merchants, blacksmiths, innkeepers, unrelated to Gwent quests. Only the first victory against a player rewards you with a card. If you play with a given person again, you will only win resources.

You obtain a card only after the first won game, in all next ones, only materials. Cards you won are random. To collect all, you must defeat most of these enemies (around 80%). You will know that you have all once after winning with a new opponent you won't receive any new card.

Below you will find a list of all Gwent cards that can be found in the basic version of the game. From the previous lists you can learn how to obtain them. If some wasn't mentioned, it means there are won randomly at merchants/innkeepers or you get them as part of the starting deck.