This page of The Witcher 3 Wild Hunt has information and tips for exploring the world on your horse. We also write about swimming and diving.

Riding on a horse - Roach 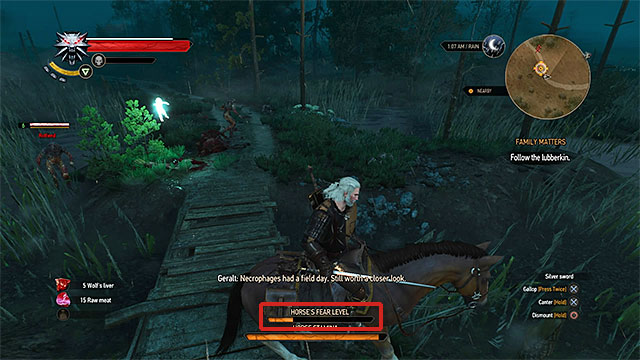 Observe the fear bar, when it gets full you will fall off the horse

The possibility to travel through the game world on a horse is a completely new feature in Witcher 3. It's an attraction that you should use because it greatly reduces the time of travel between main locations (at least until you find new signposts and unlock quick travel points). You will learn the basics of horse riding during the tutorial, but it is wise to know some other things: 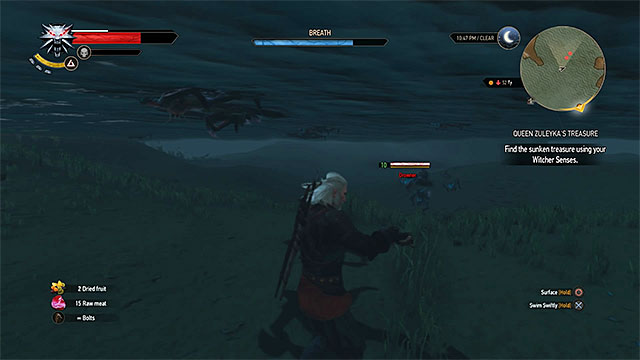 You won't swim in Witcher 3 often, but you can't ignore this topic because going underwater is required for completing some quests and for reaching some treasures lying on the bottom.

The mechanism of swimming is very simple and well explained in the game tutorial, but you must remember that underwater Geralt isn't safe. Monsters that can swim can get him. At the beginning of the game those monsters are only Drowners, the same enemies he fights on the land. Later, while diving, you can face other creatures, e.g. sirens. Geralt can't use neither his swords nor signs under water. It doesn't mean he is helpless - he can eliminate monsters with his crossbow. Depending on monster level and difficulty level you have chosen, your enemy can be killed after one or few hits from the crossbow. 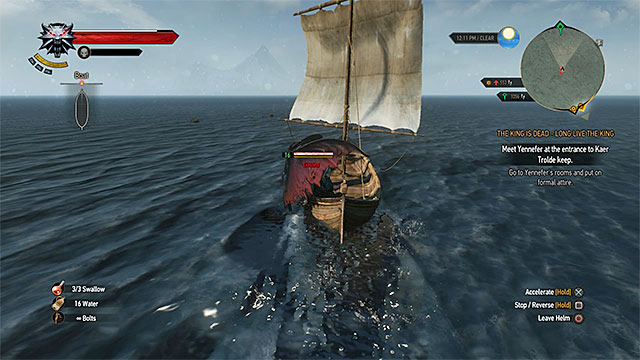 You can defend yourself while using a boat, but it is a limited way

If you must reach a far-away island or a treasure that is on open sea, then it is much better to use a boat than to simply swim there. Boats can be found at the shore in various places of the game world. Each of them can be "borrowed" with no trouble.

The boats aren't indestructible, but you would have to try very hard to damage them enough to make them incapable of using. Most of all, you must avoid hitting any rocks and getting too close to the land. Also, you must know that you can be attacked by monsters when you're swimming using a boat. In that case, the same limitations as mentioned above are valid - you can't use swords or witcher signs, only crossbow.