This page of the guide to The Witcher 3 Wild Hunt contains a walkthrough of the main quest Imperial Audience. The following walkthrough explains, among others, how the choices from The Witcher 2 can be transferred, and what is the course of the meeting with the Emperor and other important NPCs from the castle in Vizima.

Morvran Voorhis - optional transfer of the choices from The Witcher 2 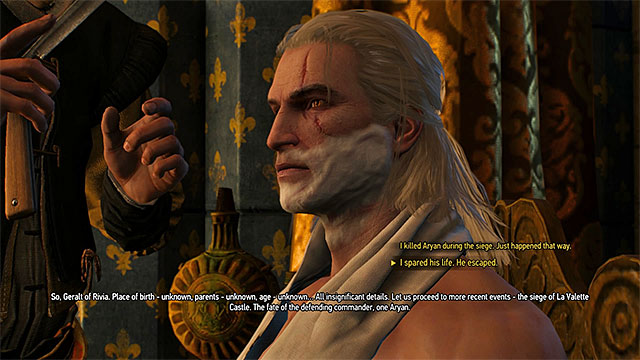 This quest starts automatically after you reach Royal Palace in Vizima.

After the first conversations, Morvran Voorhis appears in the chamber. He might want to ask some questions about previous events. It will happen only if you haven't transferred game saves from the second Witcher and if you decided at the beginning to set most important decisions from previous game by your own. It is worth noting that in the case of the console version, we cannot transfer saves. It only applies to the PC version.

Chamberlain will ask Geralt to pick an outfit (open the inventory after making a decision). This decision has no importance. During the next conversation, you can train performing correct bows or immediately go to the emperor's chamber. If you picked the first option, the second dialogue option will be the correct answer. Follow the chamberlain to emperor Emhyr var Emreis. First you will have to make a decision in a limited time - you can bow or keep standing (this choice has no importance). Listen to the conversation with the emperor.

Other encounters in the Imperial Castle

Follow the chamberlain. This time you must reach a chamber in which you will find Yennefer. Listen to another conversation. After the sorceress uses the teleportation spell, you can return to the chamberlain or first meet ambassador var Attre. He can tell Geralt many interesting things about the events that have recently occurred in the game world. Chamberlain will return all the equipment items to Geralt. Don't forget about moving weapons, armors and other important items to the right slots in the inventory.

Game will end this quest and add a new one to the journal - The Nilfgaardian Connection.