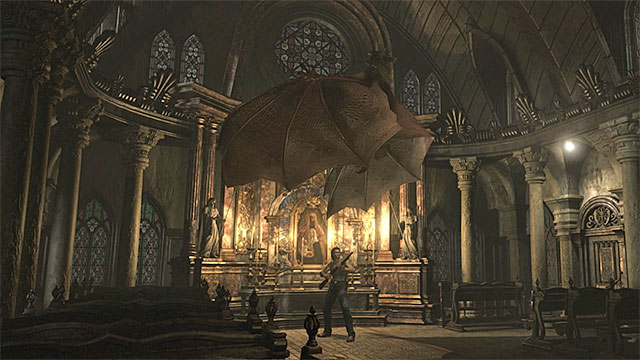 Use the shotgun when fighting the bat.

Infected Bat will attack you after you go out of the side room in the church. Stand near the altar or in some other place from which you can see a large part of the church. Aim at the ceiling and shoot every time the bat is within your reach. Shortly after the battle starts, some smaller bats will appear. Their attacks do not deal a lot of damage, but they can make it more difficult for you to aim at the boss. If you have a lot of ammo, just continue shooting and the bullets will kill small bats or hurt the boss. If you don't, consider switching to the pistol and eliminating at least some of the smaller bats. 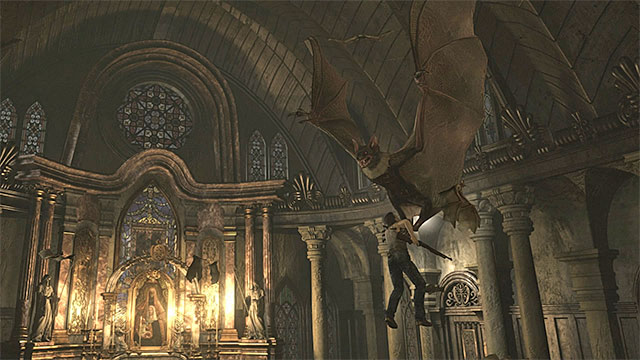 Try to stop the bat from picking the hero up.

The boss, besides dealing standard damage, will also try to catch your hero. You can allow it one time to obtain an achievement/trophy, but you should try to avoid being caught and shoot the boss before he finishes his attack. When you are picked up by the bat, you will fall down and you will lose HP. Continue attacking the bat and remember to heal Billy when he takes a lot of damage. The fight will end when you kill the bat (you don't have to eliminate the smaller bats when the boss is dead).

Note - you can fight the bat as Rebecca, if you choose Billy to stand on the tile near the door to the church. However, it is not a good idea, because Rebecca is less resilient and she can die more easily.