On this page of the game guide, we list the drugs that appear in Disco Elysium and how they affect the main character.

In the game Disco Elysium, you can find and use a variety of substances, including alcohol and drugs. It's important to note that the Player isn't forced to use illegal substances, such as Pyrholidon, if they're unwilling to do so. Legal drugs can be found all around Revachol (on bar counters, at the Frittte kiosk, or on certain NPCs), but illegal substances will not be as readily available unless you use them at least once. 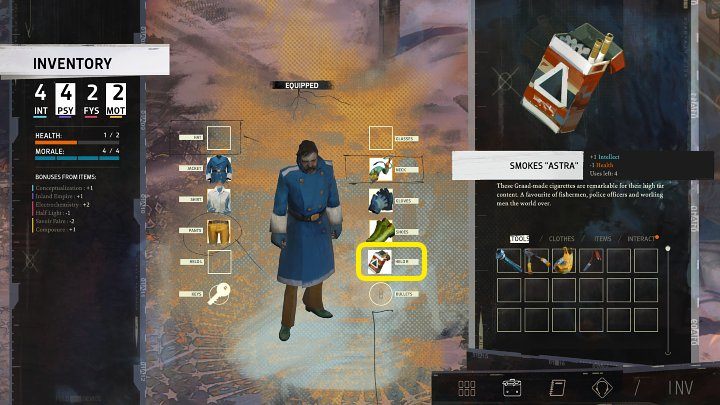 Abusing drugs in the game Disco Elysium isn't as simple and intuitive as it might seem at first. First, you need to obtain the particular substance and then place it in your character's hand. Let's use a pack of cigarettes purchased at the Frittte kiosk as an example. 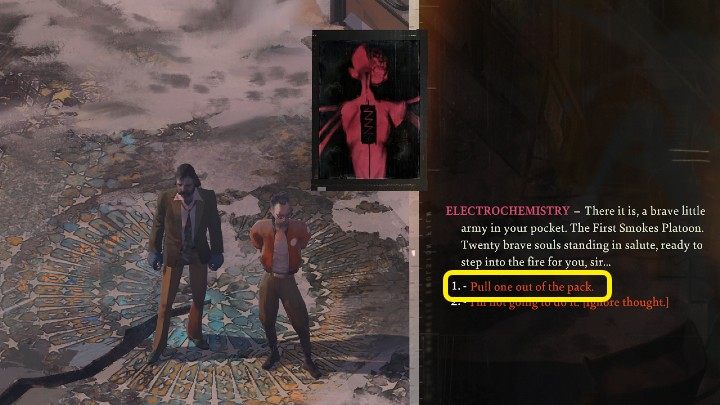 A floating ball of pink will appear above Harrier's head, indicating the Electro-Chemistry skill. Clicking on it will allow you to pull a cigarette out of the pack. In the case of alcohol, Harrier will first look at the bottle and then open it.

If you resist the temptation and reject the thought of, for example, smoking a cigarette (I'm not going to do it), you won't be able to use that particular drug for a good while. 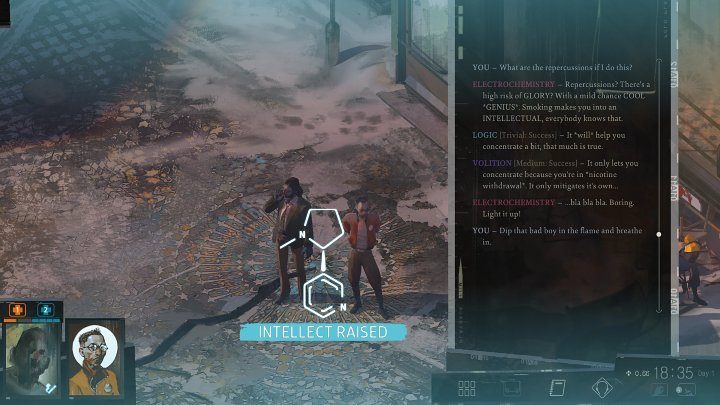 Once you pull the cigarette out of the pack, you can let Harrier smoke it. You will be notified on-screen about the bonus earned and the side effect. By smoking cigarettes, you will lose 1 point of Health.

The drugs in Disco Elysium have a certain amount of Charges, meaning that they can be used multiple times. The basic number of charges is 3, but this number increases with the Electro-Chemistry skill: having 4 points gives you 4 charges, and 7 points increases it to 5 (the maximum number).

Drugs in Disco Elysium provide Harrier with certain bonuses, but there are some risks involved - you may lose Health or Morale points, which might result in your character dying from a heart attack, for example. Before you choose to abuse a substance, weight out the risks or have some medicine on hand.

Drugs in Disco Elysium temporarily increase your character's Attributes, thereby increasing the limit of points you can invest in the skills tied to said attribute. If you invest a skill point while the character is under the influence, you will retain it even after the substance's effect has passed.

The following table lists all the drugs that can be obtained in the game Disco Elysium. It also includes their effects, potential remedies, and tips on where to find them.