On this page of the Assassin's Creed Valhalla guide, you will find a detailed walkthrough of the Holy Day quest.

Eivor helped Guthrum free his men and gathered his allies at the forward camp. It is time to attack Cippanhamm. 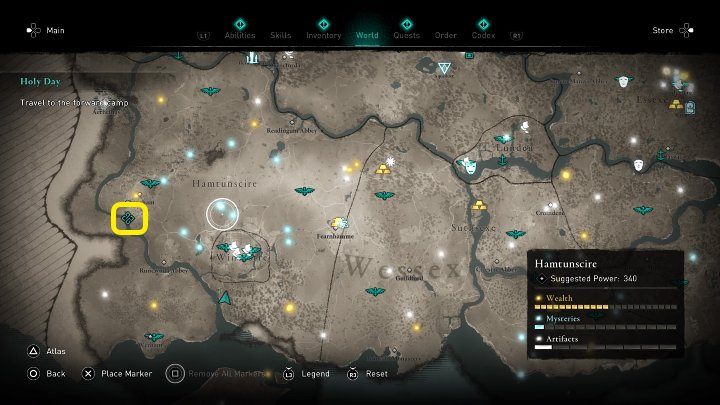 Travel to the forward camp 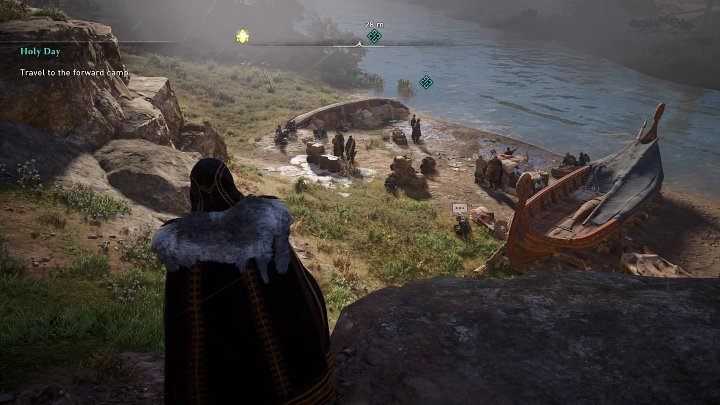 When you reach the small forward camp by the river, you will notice that your allies from all over England have already gathered here: Ljufvina and Hjorr, Tewdwr, Erke and Stowe, Broder, Finnr, Vili, Hunwald, Geadric, Bishop Deorlaf, and even young Eluric (son of Birstan and Alfida). 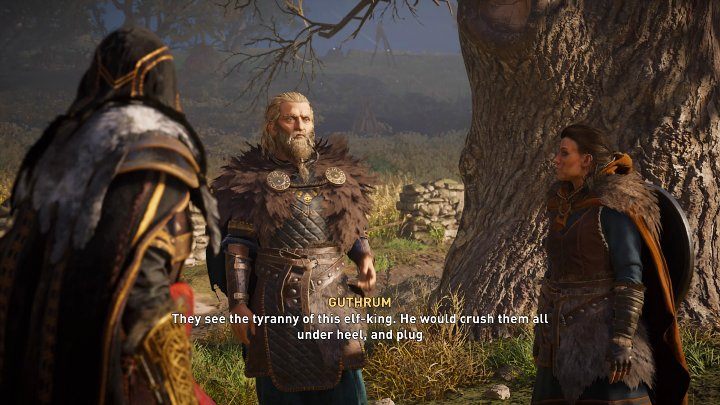 Talk to Guthrum - you will find him accompanied by Soma next to a tree on a small hill. During the conversation, the commanders will discuss the plan of action and determine that you will attack during the evening feast. 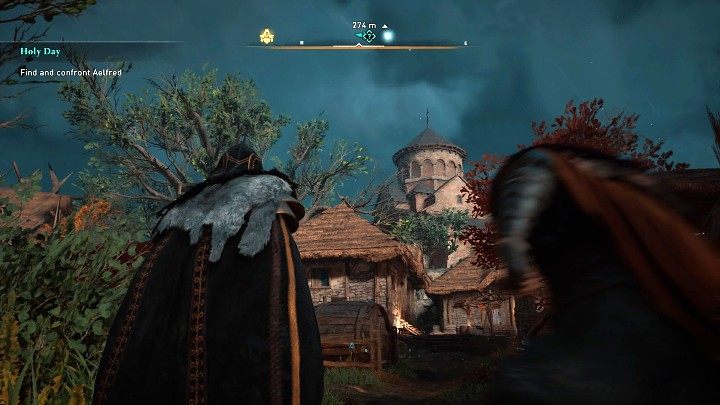 Go through the town and enter the church on the hill that you can see in the picture above. If you have trouble locating it, use the raven to show you to the right spot. 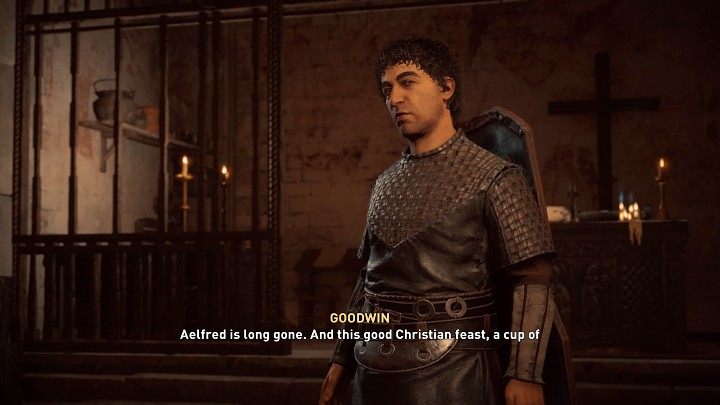 Goodwin, Aelfred's trusted man, stands in your way. The man reveals that his king is long gone from this place, and that the Christian feast was just an excuse to lure them to this place and give Aelfred time to gather his allies. There will be a fight between Eivor and Goodwin.

Goodwin fights with a long sword and a heavy shield. His Power is set at 340 points, making him a problematic enemy for those who have not developed their character to that level yet. 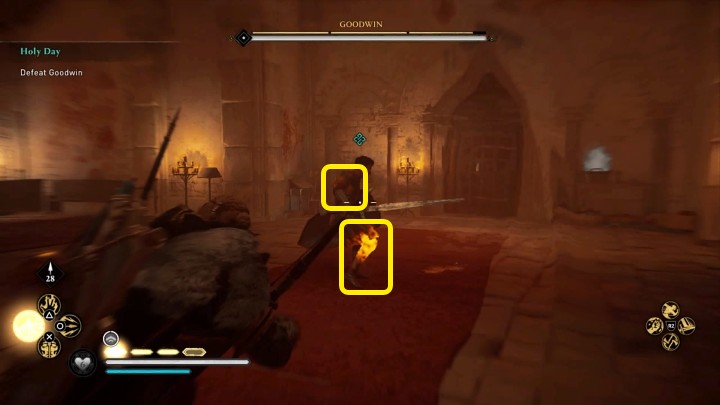 Goodwin has three weak points: his right knee, right shoulder, and back. When you hit these points, he will be stunned, which gives you a chance to launch a powerful attack. 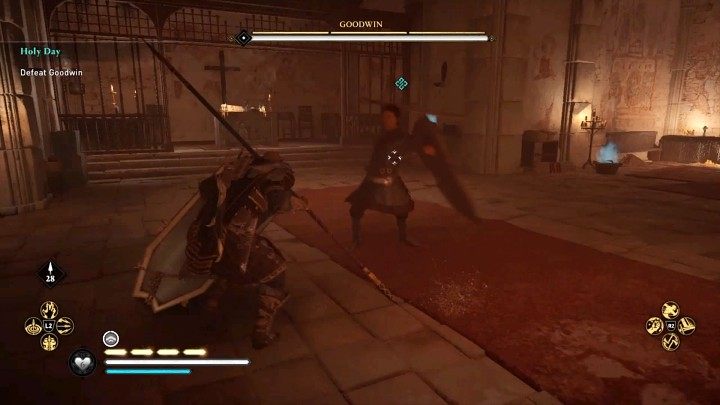 If you fight exclusively with melee weapons, probably the best tactic against Goodwin will be to use strong attacks to break through his defenses and knock him out, giving you a chance to land some accurate blows. If you fight while holding a shield, block your opponent's blows to gain an opportunity to counter. 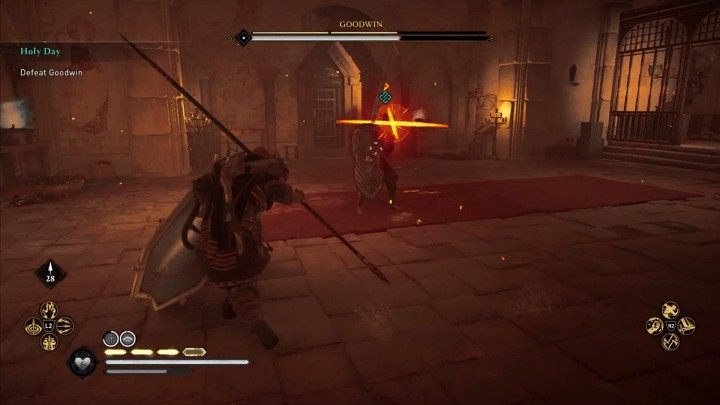 Most of Goodwin's attacks are slow and signaled beforehand, so they are easy to avoid or block. However, watch out for attacks that are signaled by a red rune flash, such as stabs, which must be avoided. 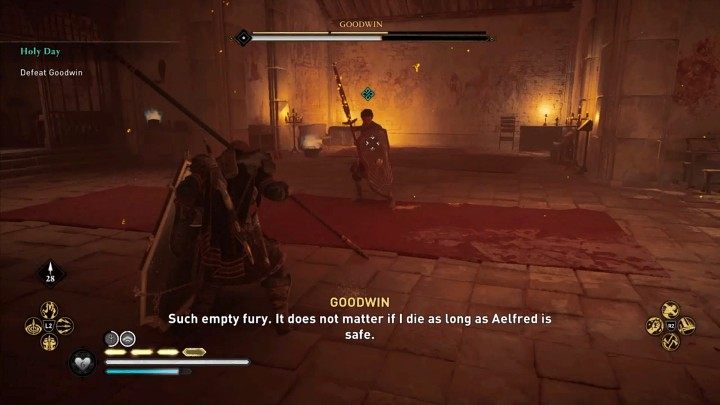 Goodwin has access to an ability that sets his weapon on fire, allowing it to deal extra damage. If Eivor is hit multiple times in a row, he will take fire damage spread out over time. 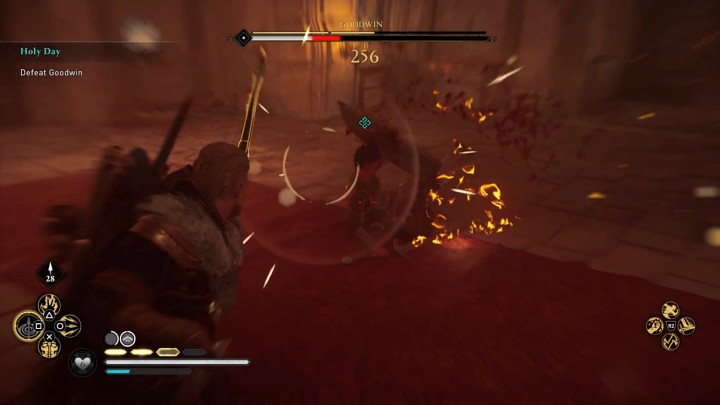 Ranged weapons are also extremely effective against Goodwin, as your enemy will not be able to block shots at his head height, which will deal the most damage to him. 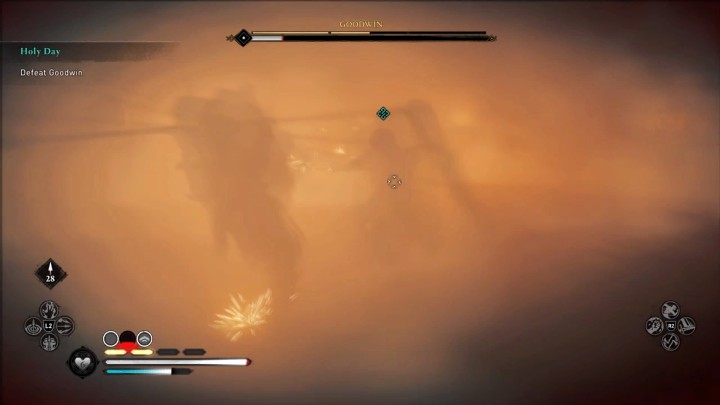 When your enemy's health drops to a low level, he will use the Hellfire skill, which will obscure your visibility slightly, but you may still go on with the fight. 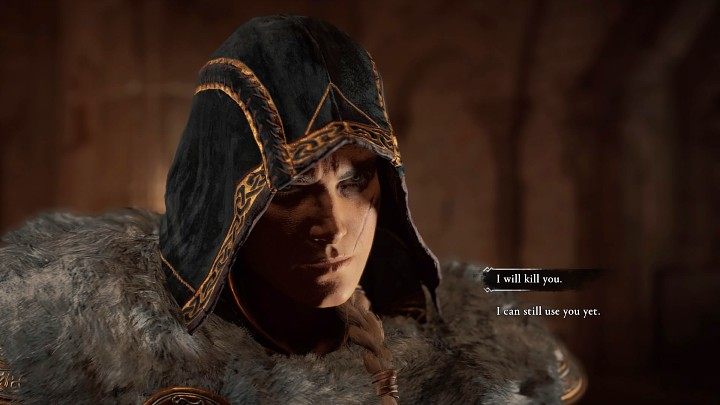 After the fight, you can decide the fate of the defeated Goodwin.

Cippenhamm has been surrounded by King Aelfred's soldiers, and you have to help your allies repel their attack. Ljuvfina, Guthrum and Broder are waiting to help 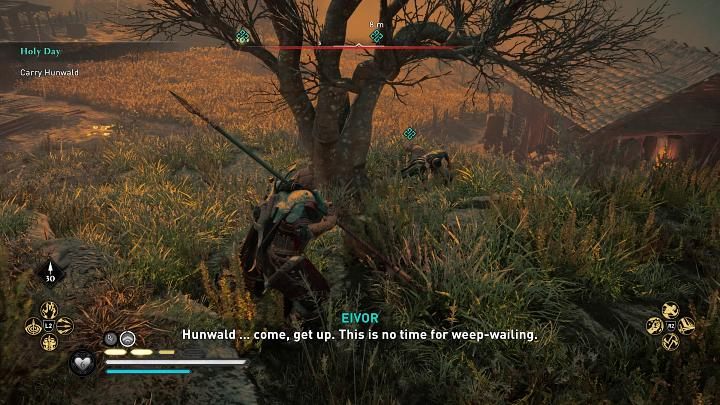 You'll find Ljuvfina west of town - she's fighting some soldiers there. Right next to her lies an injured Hunwald, whom you must move to safety. 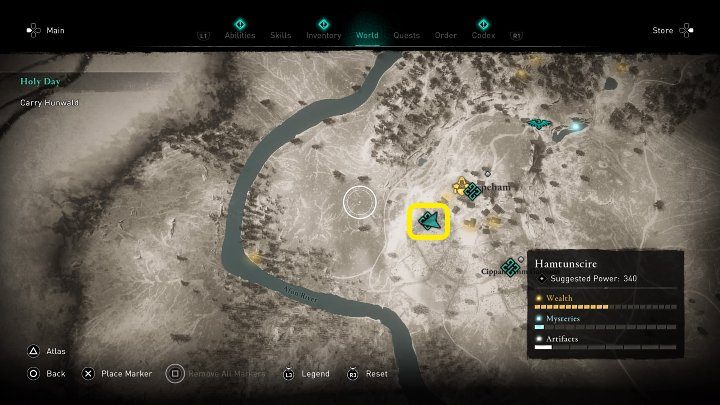 You have to move Hunwald to the hut, which is located in the place marked in the picture above. 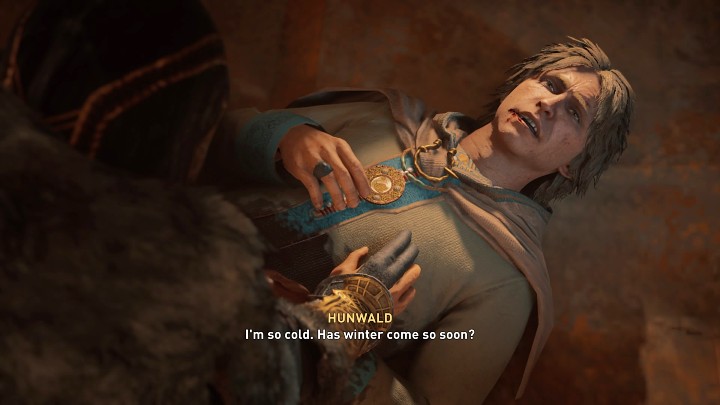 After a brief cutscene, the young man dies - the wound was too deep, and he couldn't be helped. 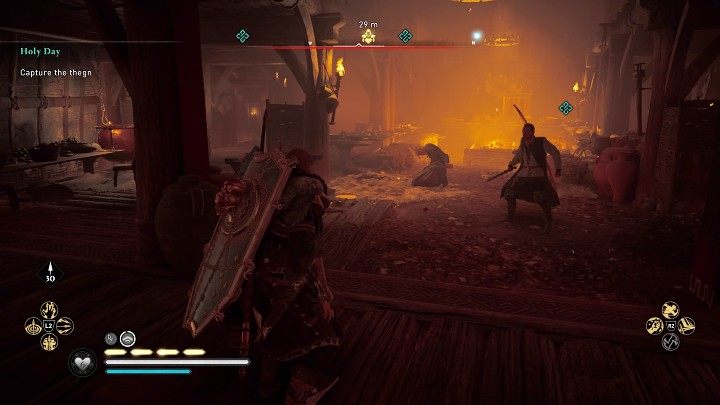 You will find Guthrum in the Feast Hall, where he is holding the captured man. Unfortunately, he has managed to barricade himself behind the door, and you need to get to him. 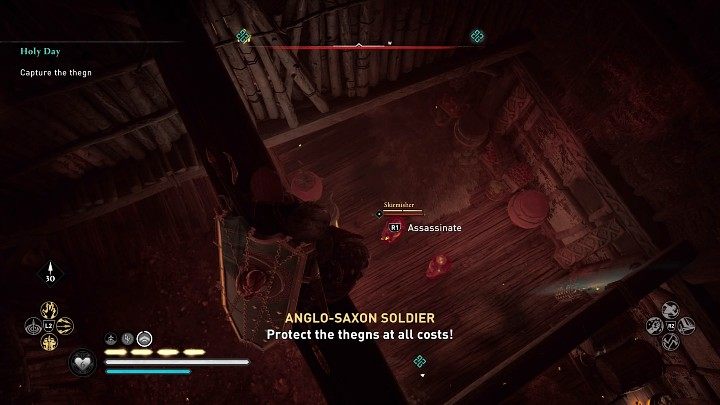 Climb the wall and go into the locked room through the opening at the very top. Eliminate the two guards, tie up the last thegn and open the door. 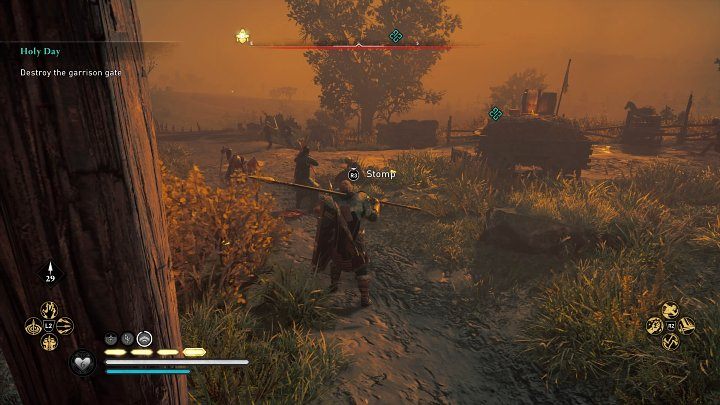 You'll find Broder at the east gate, where he's fighting soldiers and trying to get into the garrison. You have to help him and open the gate from the inside. 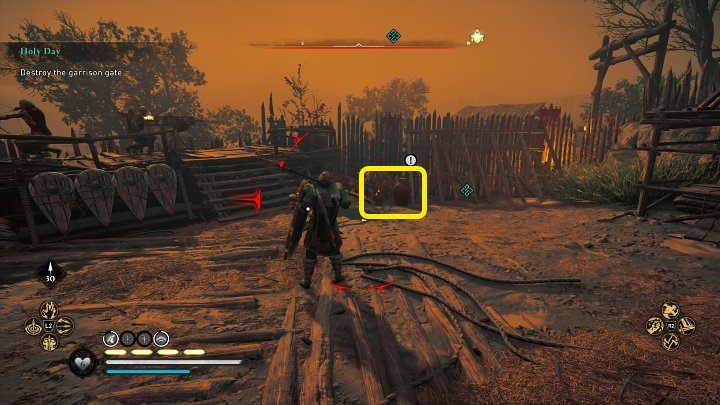 You can get inside through a hole in the palisade (on the left looking towards the gate) or by climbing the nearby rocks. Aim for the oil jug and shoot it to blow up the gate. Then help your allies secure the garrison. Defeat the soldiers stationed there. 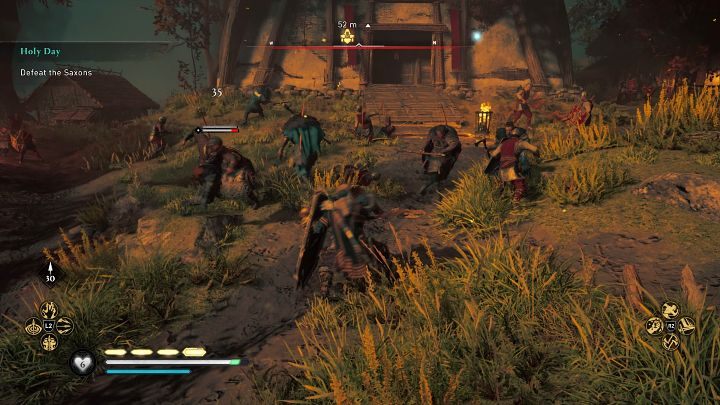 Join your allies and fight the Saxons who are in the city. At some point, King Aelfred's soldiers will throw themselves into the flight, and Cippenhamm will be conquered. 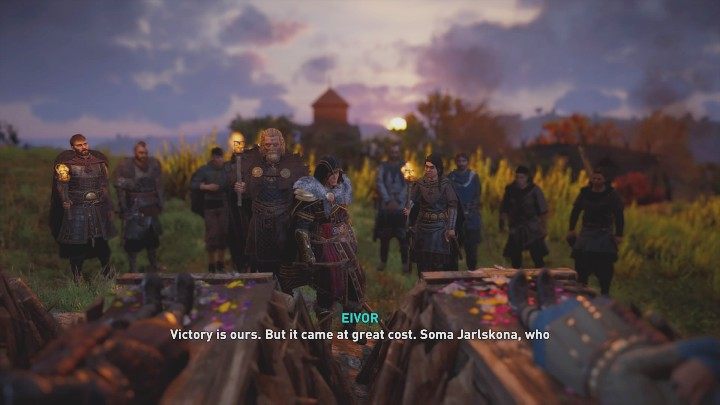 After the battle, you will have the opportunity to talk to those allies who managed to survive or say goodbye to all the fallen right away. Aelfred's forces were defeated, and Guthrum triumphed in Hamtunscire, but the price to pay for this victory was huge. After the cutscene, the mission will end and you will receive 5 100 XP as a reward.

After returning to Ravensthorpe, inform Swanburrow of Hundwald's death and report back to Randvi about Hamtunscire.