This game guide to Assassin's Creed Valhalla contains a complete set of information about the latest installment of the popular action game series.

Currently, our walkthrough contains information based on pre-release promotional content. Therefore, you'll find chapters that discuss the topics of combat, Eivor, world exploration and Drakkar - the special attack of the main protagonist.

Once the full version of AC Valhalla is released, the guide will be updated. Then we will add, among other things, a complete walkthrough of all levels and an extensive FAQ section. In the latter you will find answers to many questions which may arise during gameplay.

The guide is based on promotional content provided by developers and distributors. Its content is subject to change.

AC Valhalla in a nutshell

Assassin's Creed Valhalla is the twelfth major part of the sandbox series, which has been in development since 2007. The title follows the path set by two previous installments - Origins and Odyssey, and continues to be an action RPG.

The action depicted in the title takes place in ninth-century England. In the game you will play as the leader of one of the Viking clans, whose name is Eivor. The protagonist decides that he has to find new living territories for his people. That's why he wants to move his people out of Norway. After crossing the North Sea, they arrive at the coast of the British Isles. Once he gets there with his people, they discover that this region is in a state of war where different nations fight for land full of valuable resources.

In terms of gameplay mechanics, the title is not much different from the previous two installments of the series. During the adventure you will find yourself in an open world filled with all kinds of activities. The most important of these include various missions and battles with opponents. By making progress in the game, Eivor will advance to a higher level. This will allow you to acquire new skills.

Also, there are many novelties in the new part of AC. The unique feature of this installment is the possibility to expand your own settlement.

Will AC Valhalla be available on Steam platform?

At this particular moment, there is no indication that AC Valhalla will be released via Steam. Currently, it's known for sure that the title will be available for purchase on the Uplay platform and in the Epic Games Store.

When will AC Valhalla be released?

The exact date of AC Valhalla release is unknown. However, it is known that the title will debut at the end of this year.

By acquiring this edition, which costs $119, in addition to the copy of the game, you will receive the following bonuses: 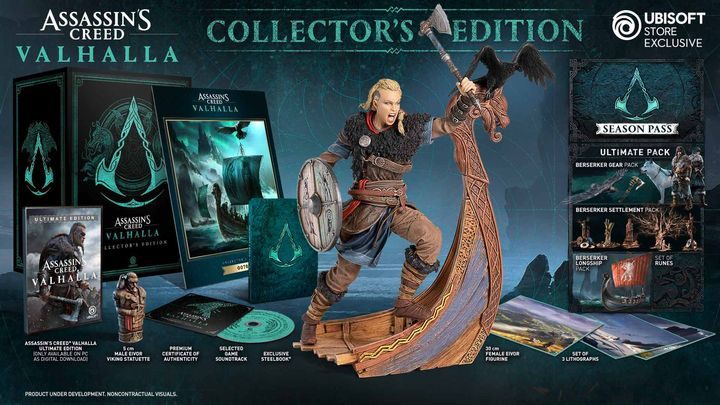 The most expensive edition of the game that costs $199.99. It can only be purchased in the Ubisoft Store. This edition, in addition to the copy of the game, includes the following items:

This is upcoming Game Guide and Walkthrough for Assassin's Creed: Valhalla Video Game.

We are working on it now. We want to publish this Game Guide close to Assassin's Creed: Valhalla Release Date.

Should We Believe the Leaks? We Analyze Which Rumors Checked Out

"GTA 6 will be set in Texas"  the headline yells, and we wonder if we should believe it or not. We've been going through the leaks and rumors of recent years to see if they're worth believing.