On this page of the Assassin's Creed Valhalla guide you will find a detailed walkthrough of the A Brother's Keeper mission.

Eivor travels with Sigurd deep into the wilds of Hordafylke, which holds great secrets. 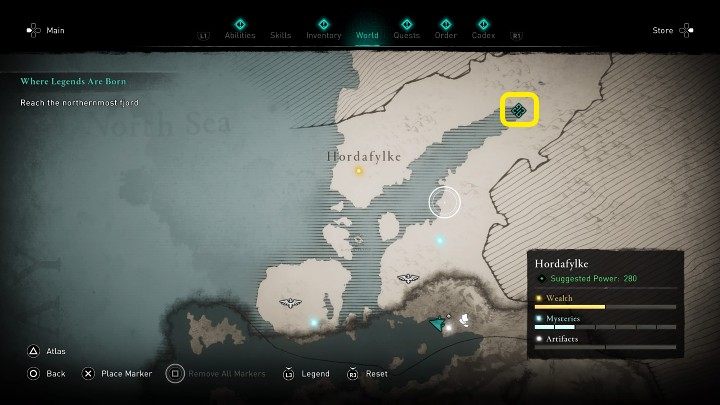 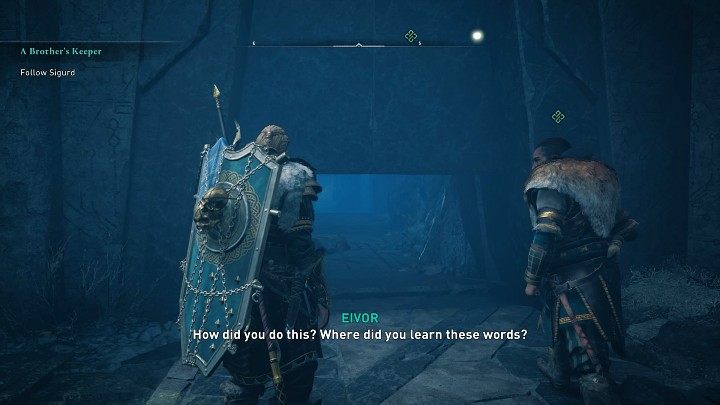 Follow Sigurd to the top of a nearby mountain to get to Goinnhellir and worship the gods. When you arrive, Sigurd will recite a ritual and open the gate leading to the heart of the mountain. 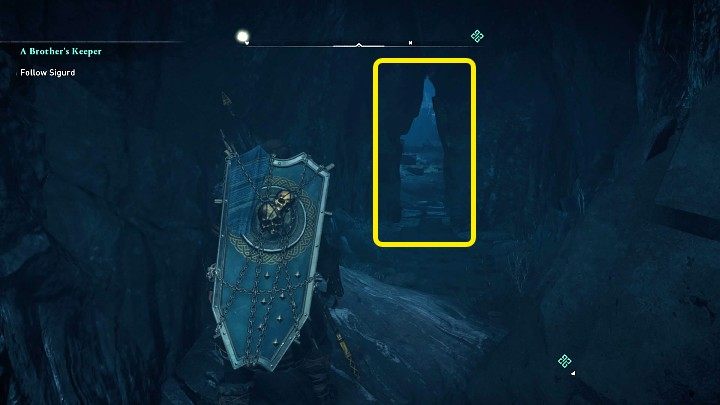 Before you go inside, it's a good idea to turn around and go into the side cave through the narrow gap on your right. 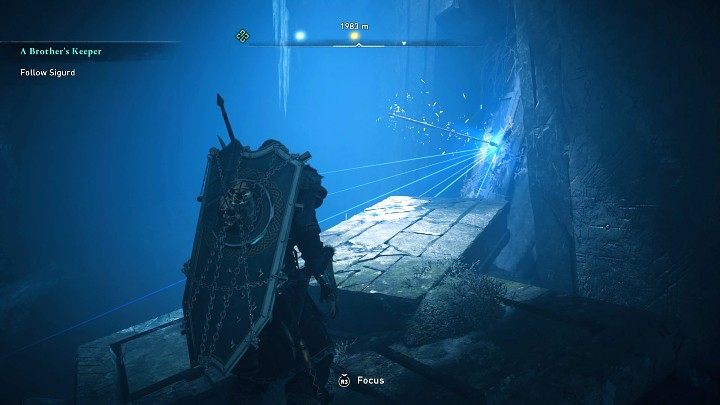 Right there you will find Gungnir (Odin's spear), a weapon of the highest quality, which got stuck in the wall. This is one of the best spears available in Assassin's Creed Valhalla. 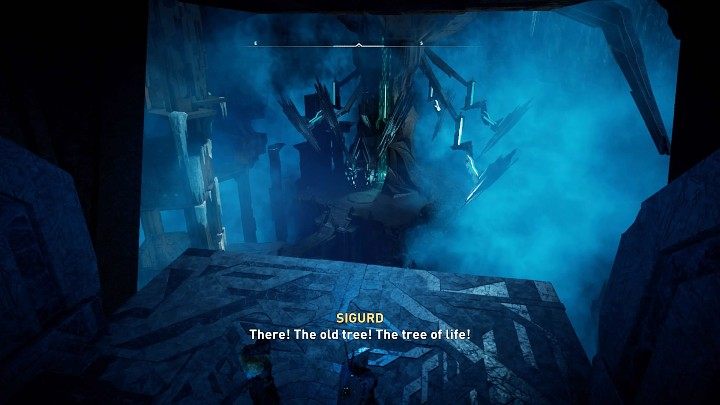 Return to Sigurd and go deeper into the mountain, then step onto the platform that will take you to the lower level of the temple. You will see the Tree of Life. Keep following Sigurd. 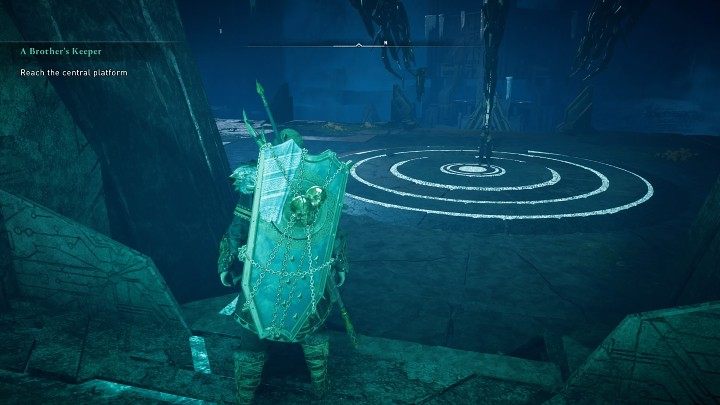 You will eventually reach the chapel, where Sigurd will explain to Eivor how the Tree of Life works and will open the way to the gods' asylum, Valhalla. Follow your brother onto the middle platform and connect to the simulation. 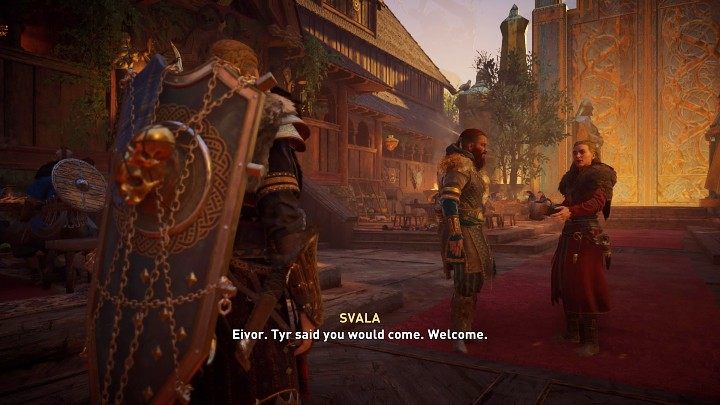 You will wake up in one of the huts in Valhalla. Get up, go outside and walk towards the giant golden gate. There you will meet Sigurd and Svala, Valka's mother. At this point, Eivor will be ready to admit that Sigurd's visions were true. 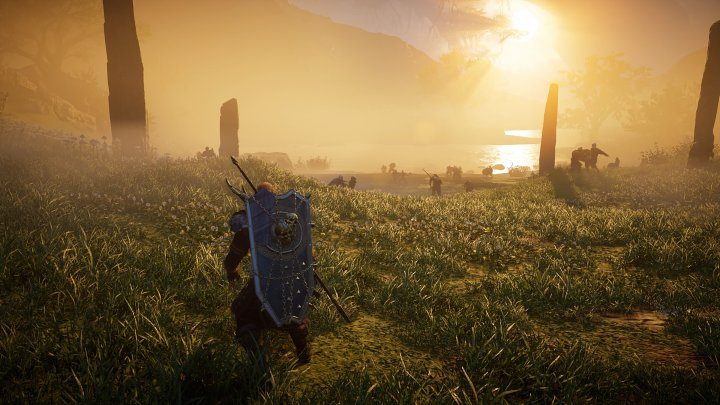 Once you hear the battle horn, go out through the giant gate and throw yourself into the battle together with all the other Vikings. 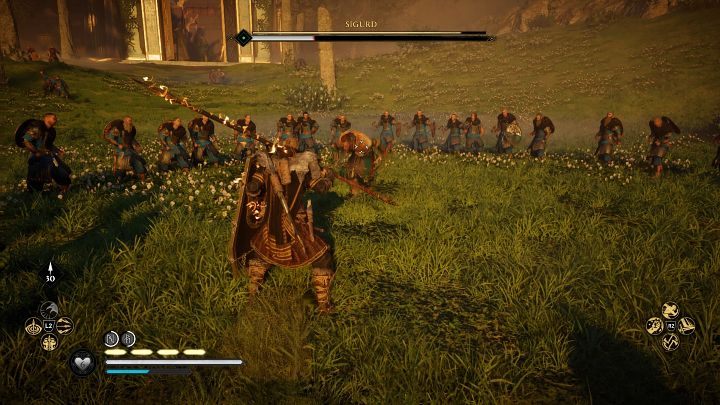 After a while, Sigurd will want to speak to you and fight a brotherly duel. The battlefield will be limited, but at this stage of the game, fighting Sigurd should not cause you any trouble. 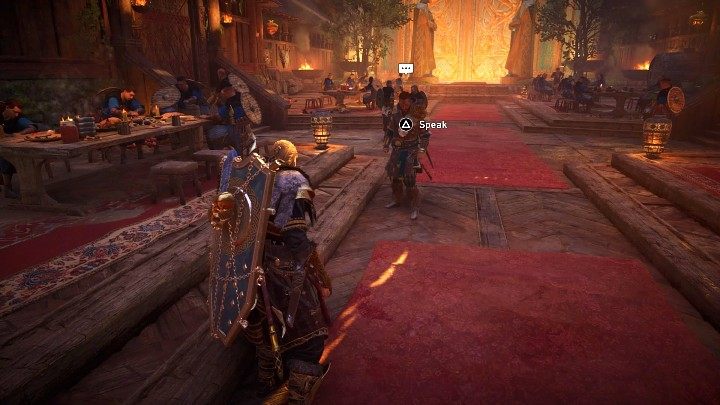 After the battle, you will once again hear the battle horn sound. The screen will go dark for a second and you will begin another day in Valhalla. Talk to Sigurd and go to battle with the rest of the warriors. 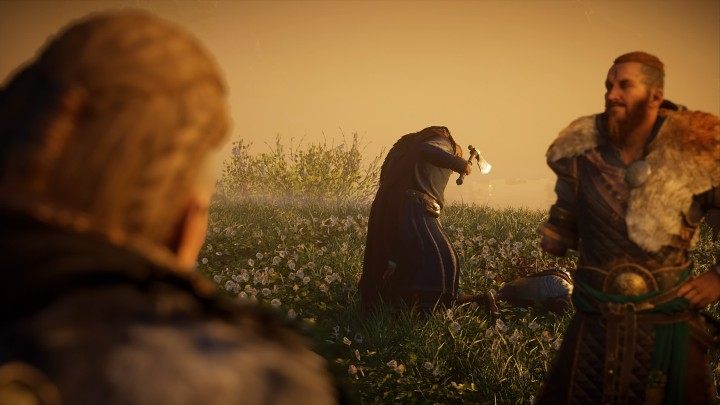 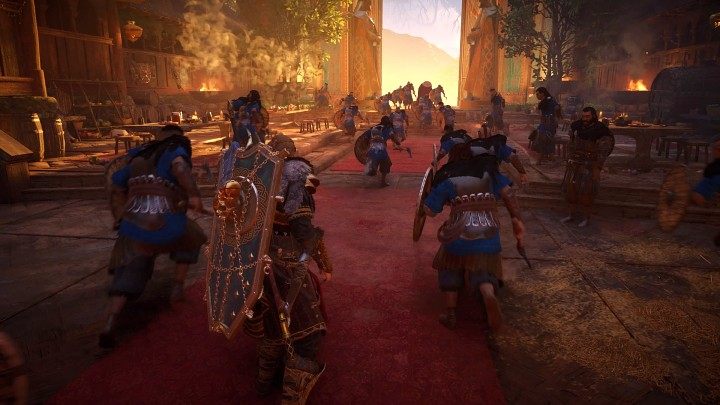 Get up, speak to Sigurd and Svala, then go to the last row of tables. You will meet the figure you saw in your vision the day before. Before you have time to speak with the man resembling Eivor's father, another battle will occur. This time, after the battle is over, you manage to catch the stranger's attention long enough to see his face. The battle horn will announce the end of the day. 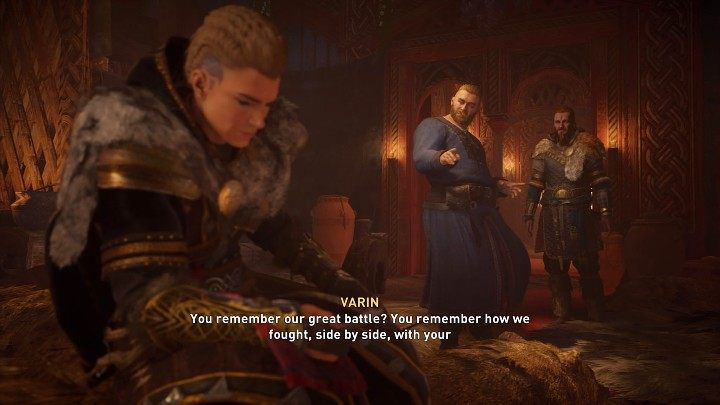 Another day in Valhalla will come. Sigurd will bring a guest to your bedroom, namely Varin. Sceptical, Eivor doesn't believe in this illusion and accuses the father of dying like a coward, which is why he should not stay in Valhalla. Eivor kills the man shortly thereafter. Sigurd admits that he has a power here which allows him to manipulate the events in the warriors' asylum.

After talking to Sigurd, go talk to Svala. At this point, Eivor will realize that this place is a lie and nothing she sees here is real. 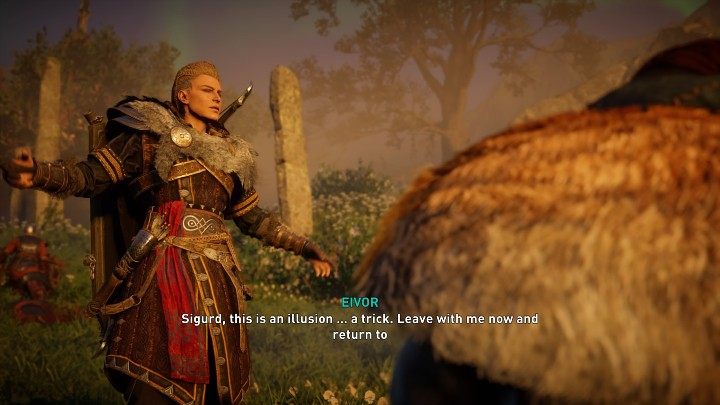 Go out to the battlefield and find Sigurd. Wait a moment until he appears right in the middle of the green meadow. When Eivor tries to convince Sigurd that everything here is just an illusion, he will finally agree to return. 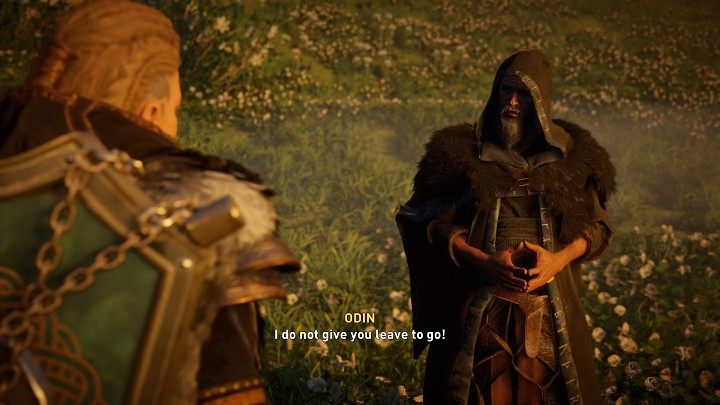 After a while, Odin will appear in the clearing and forbid the siblings to return to the real world. Once you wake up, follow Odin and he will tell the story created by Eivor. As soon as you defy Odin's will, a fight will be triggered. 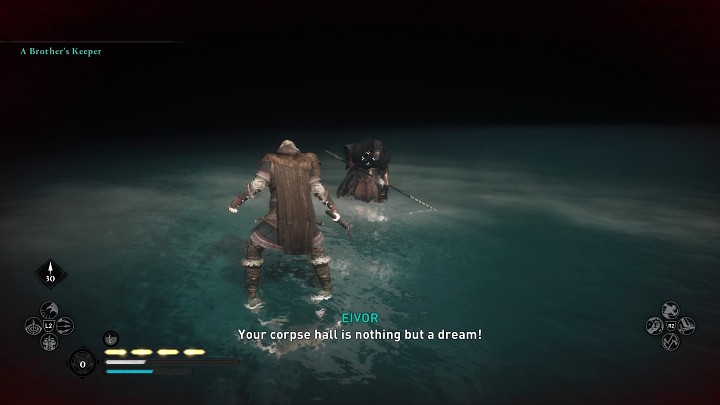 Just as you're about to hit your target, Odin will vanish into thin air. The opponent will eventually stop this uneven fight and knock Eivor to the ground. 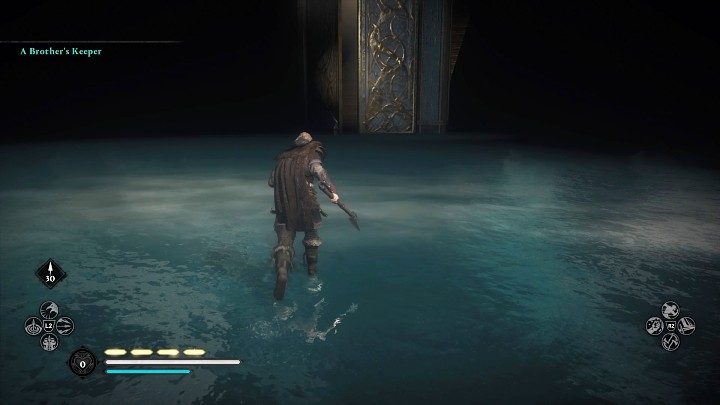 After a while, Sigurd will appear on the scene - pick yourself up and run towards him. However, Eivor will be stopped by Odin and dragged back into the arena. 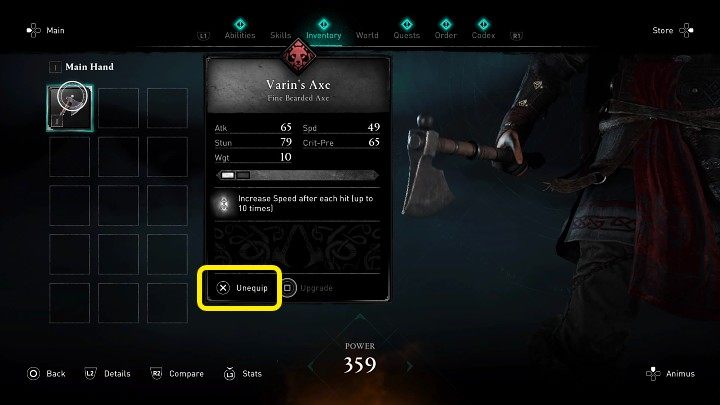 After your second defeat, Randvi will appear on the scene and the screen will inform that Odin is wielding your axe. Go to the character menu and remove the weapons from your character's equipment, then run towards the gate. 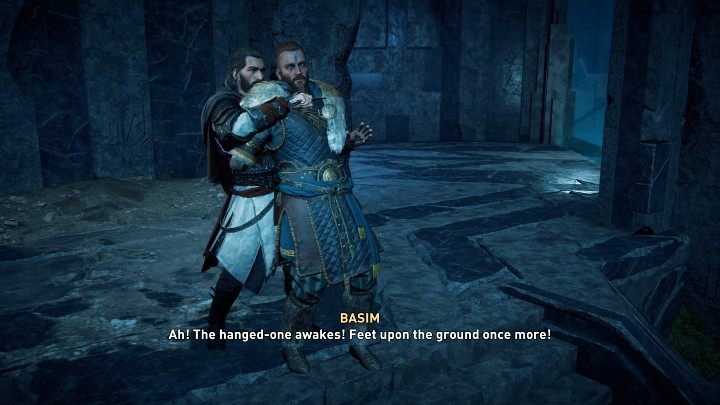 You will wake up in a chapel and notice that Basim has appeared on the scene, holding Sigurd hostage. 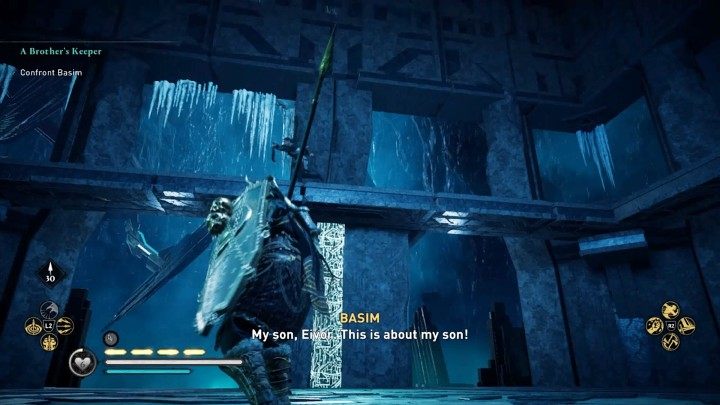 Basim is an extremely fast and agile opponent, who can attack from different angles, and will not hesitate to use clever tricks like smoke bombs. The fight against this opponent is different from all the boss fights you have encountered in Assassin's Creed Valhalla so far. Basim has no health bar and you can deal damage to him only within the stone arena.

If you run into trouble during a fight and run out of healing items, there are mushrooms growing in the corners of the arena that will quickly replenish your missing health points. 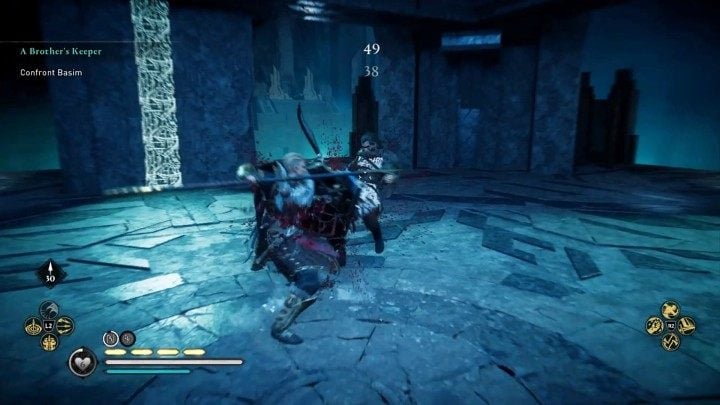 Basim will start the fight by attacking from above and will attempt to jump on Eivor from the upper level of the temple. Be prepared to do dodge him, and you'll be able to land some good hits on him to start off the fight. 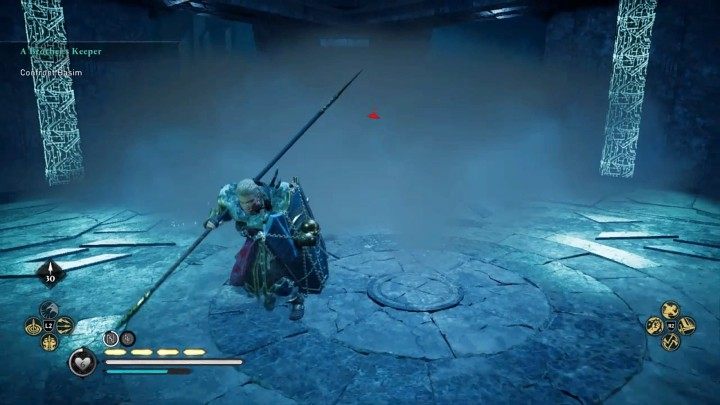 This opponent will often use smoke screens. Your visibility will be greatly reduced, but you can still deal damage to Basim if you remember his most recent location. 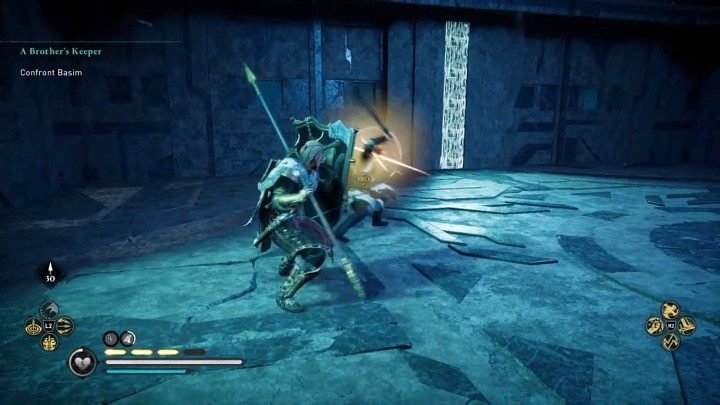 Most of Basim's attacks are indicated by a yellow rune flash - they can be avoided or parried. Beware, however, of attacks signaled by a red flash, which are unblockable and must be avoided.

Ranged weapons work great in the first phase of the battle, especially when used in tandem with the Focus of the Nornir ability to slow down time. By aiming for Basim's head, you can do massive damage with just one missile. 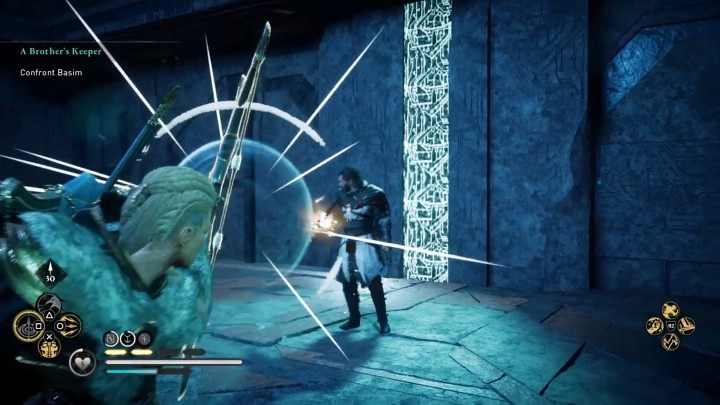 Continue fighting until the platform starts going down - at this point Basim will be able to block projectiles with his weapon (showcased in the above image), so it's a good idea to switch to melee combat. 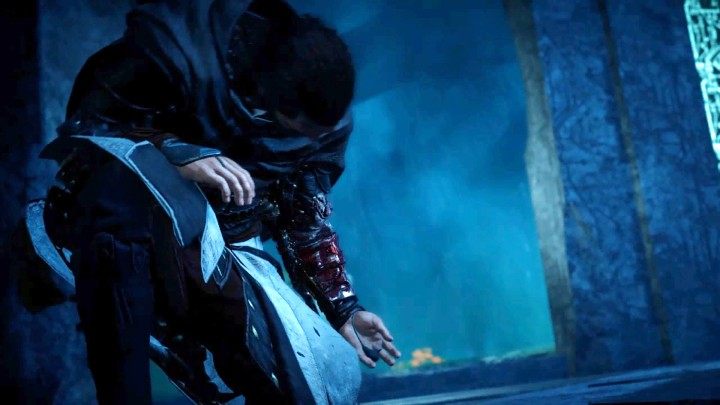 After a long fight you'll finally be able to overpower Basim, and when he gets down on one knee you'll be able to perform a Stun Attack, cutting his left forearm and removing his deadly weapon - the Hidden Blade. 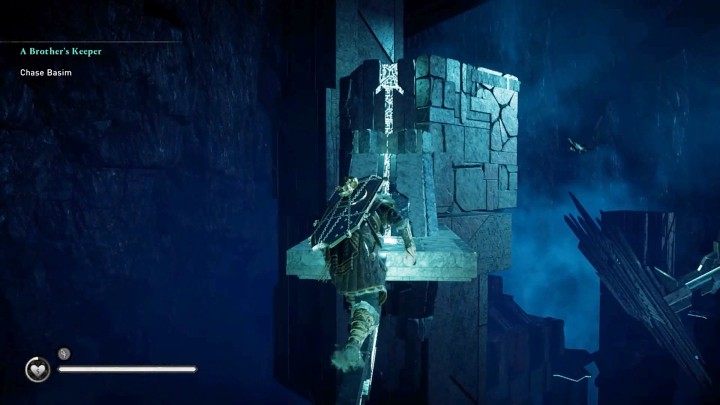 Basim will try to run away and reach Sigurd - run after him. While jumping between obstacles you will have the opportunity to collect some mushrooms to restore your character's health. 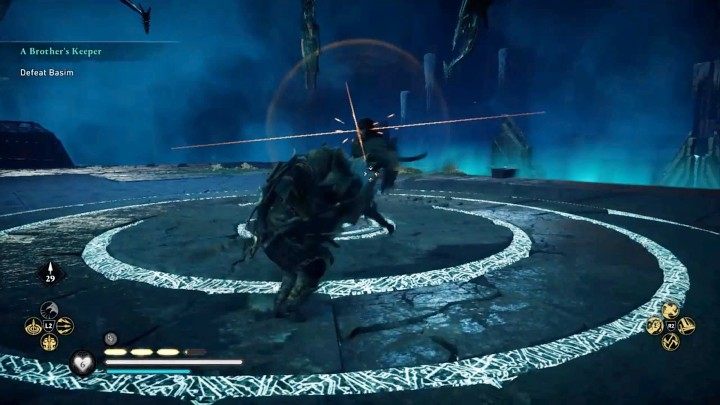 During the second phase of your clash with Basim, you just need to avoid his speedy attack combos and counterattack. The opponent will no longer use sneaky tricks like smokescreens or attacks from above. 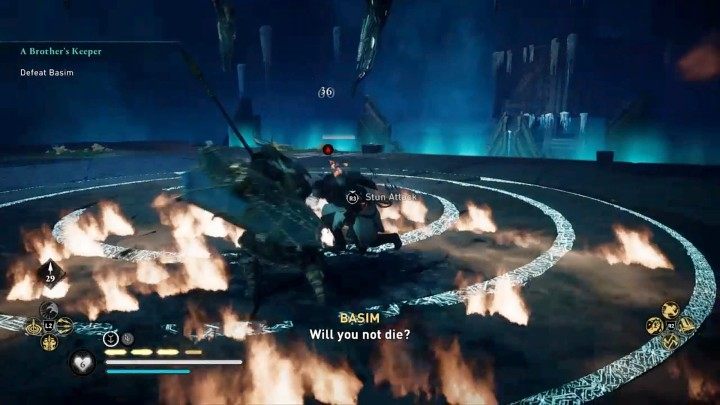 If you have a shield, all you have to do is block your opponent's blows a few times and you'll stun him to the point where he falls helplessly to one knee.

Otherwise, lure your opponent to the luminous circle area and then shoot his green glowing arm to stun him. 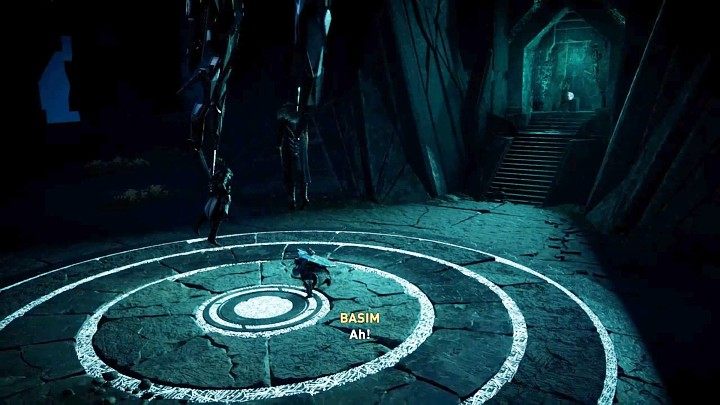 Perform a Stun Attack and Eivor, though wounded, will hold their opponent and connect him to the mechanism, putting his body to sleep and sending him into the simulation. 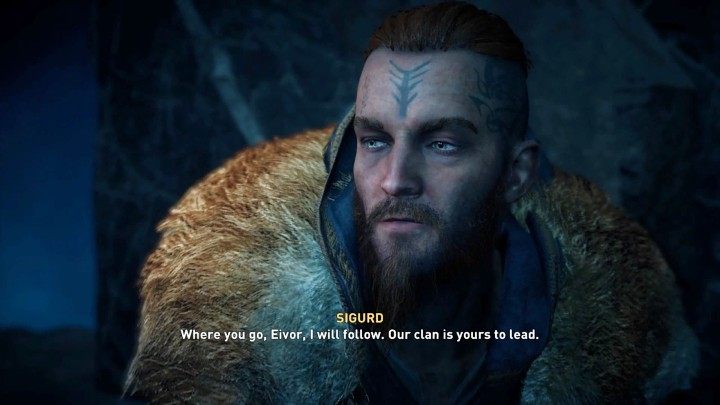 Talk to Sigurd after the fight. When Eivor mentions returning home, Sigurd will express his honest opinion about Eivor and the winding paths of their friendship. It is at this point that Sigurd will summarize Eivor's actions that have determined the ending of Assassin's Creed Valhalla and will decide to either return with Eivor to England or remain in Norway. The mission will end after the cut-scene.