On this page of the Assassin's Creed Valhalla guide, you will find a detailed walkthrough of the Mistress of the Iron Wood mission.

Eivor drinks a potion that allows him to travel to Jotunheim, where he must gain the favor of Angrboda. 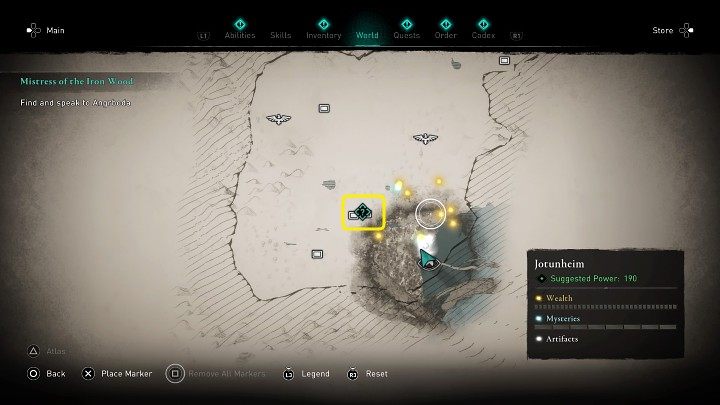 Find and speak to Angrboda 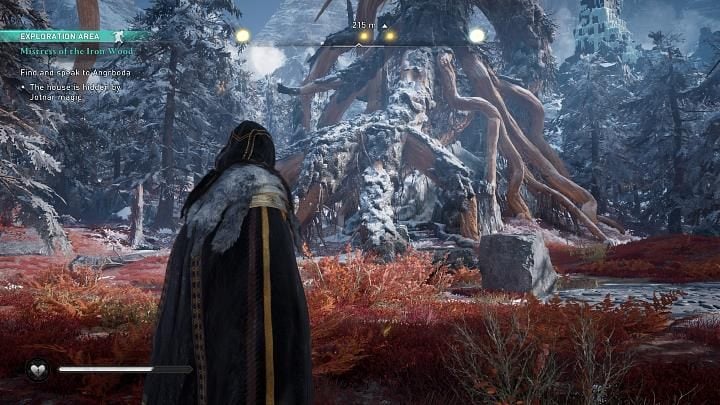 Proceed to Hearth of the Wood; the location indicated on the world map. Angrboda's hut is shrouded in Jotun's magic, so you will have to break through it first. 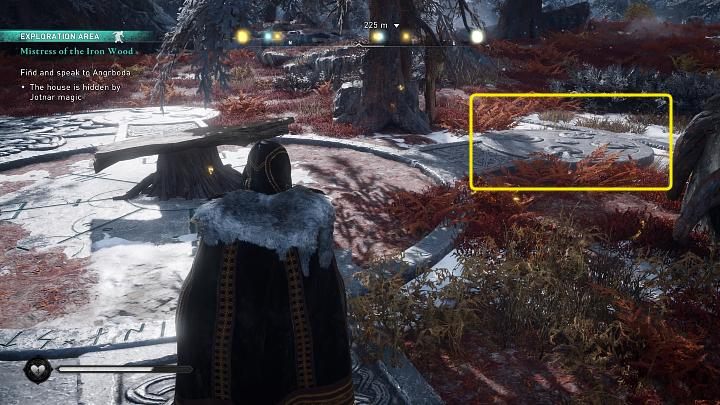 Close to the roots of the Tree of Worlds (Yggdrasil), you will find a sundial-like structure. Stand inside the small circle as shown in the picture above. 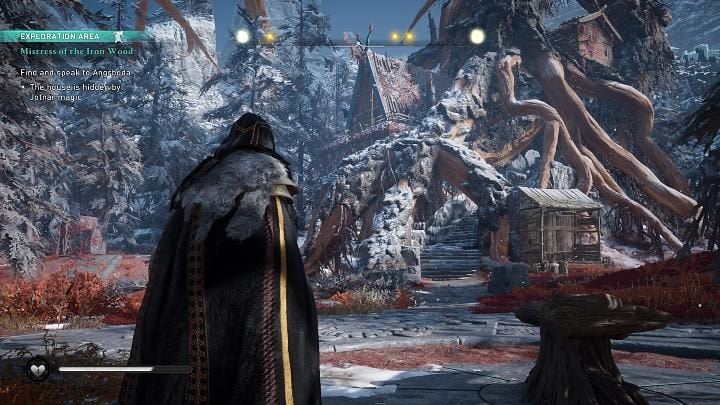 Turn towards the Tree of Worlds, and the Witch's hut will suddenly appear on the screen - braided into massive roots. Go up the stairs to the top level of this strange structure and talk to Angrboda. 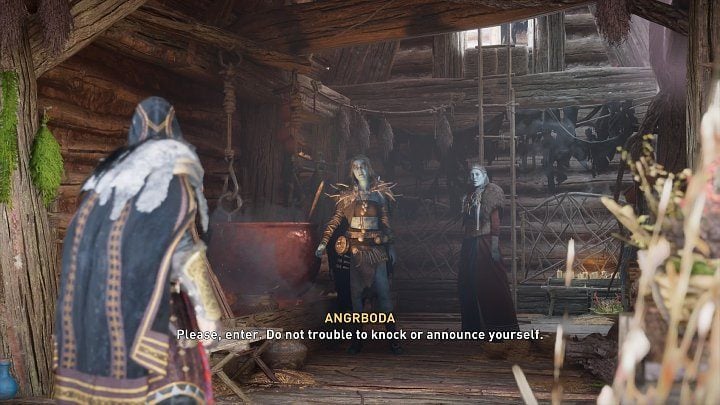 When you say you've come a long way to learn more about Jotun's magic and ways of transferring spirits between bodies, Hyrrokin will join the conversation and mention mead; Angrboda clearly doesn't like his jabber. 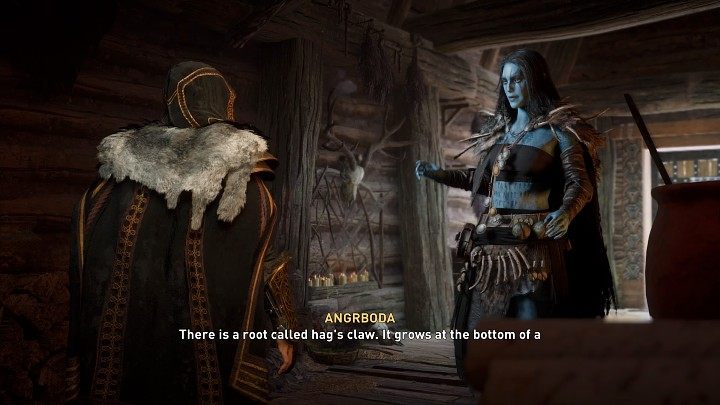 Angrboda is willing to reveal more information about the mysterious Jotun mead, but there is a price to it. In return, he wants to receive three pieces of a root called The Hag's Claw.

Find and enter the waterfall 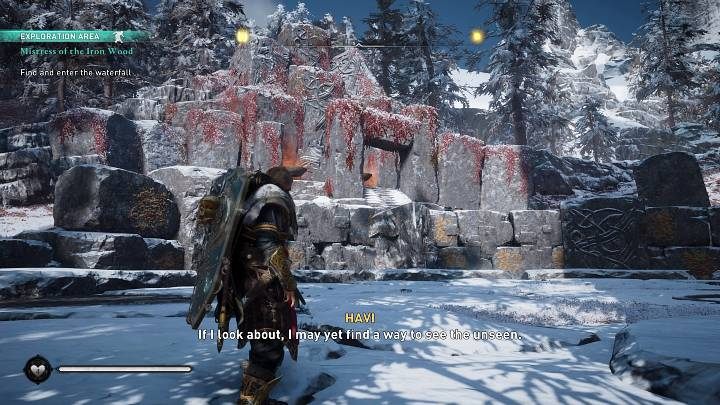 Go to the location indicated on the world map. Once you are there, you will find that the waterfall has also been magically cloaked to prevent its undesired discovery. 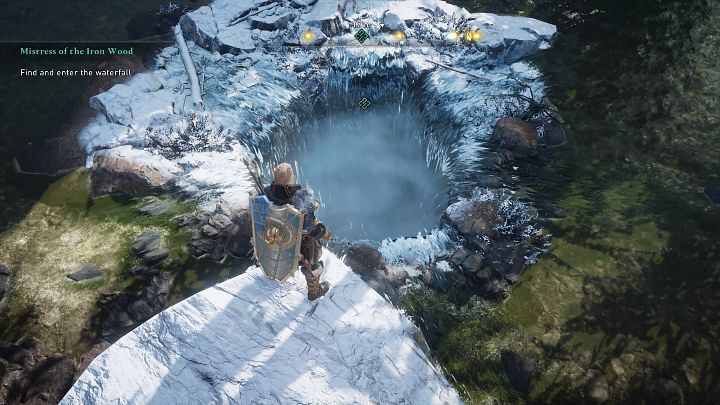 Climb the rock nearby and stand as demonstrated in the picture above A mysterious well will appear before your eyes - jump into it.

Find and gather the roots 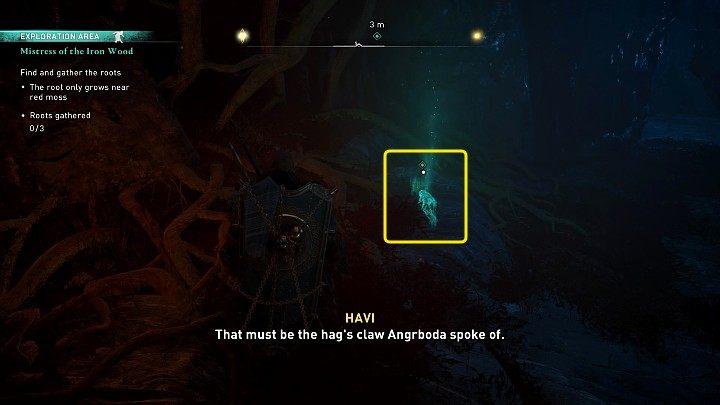 Go deep into the underground cave and jump between further obstacles and the roots of Yggdrasil. The Hag's Claw grows only in a distinctive spot overgrown with red moss. Once you've collected the three ingredients, exit through the narrow corridor at the top of the cave and return to the witch (make sure that you stand inside the circle to reveal Angrboda's house again). 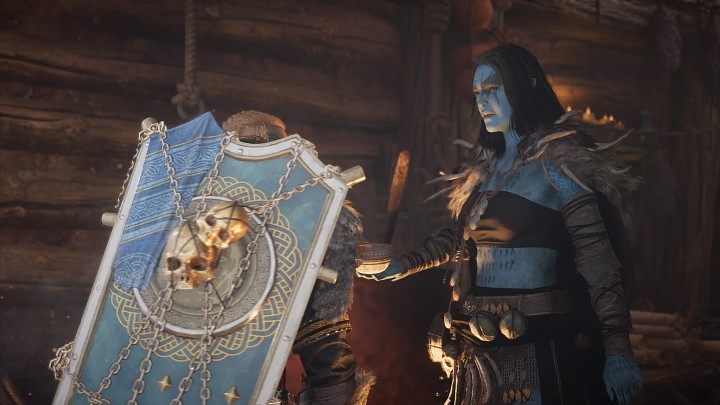 Angrboda will take the roots and start preparing the decoction. When the potion is ready, drink it to open your mind to the mysteries of this world. After a while, Angrboda will start asking Havi questions about Asgard and its security measures. The Hag's Claw decoction has the properties of truth serum, so you won't be able to resist its effect. When the witch asks what you are willing to sacrifice for mead, answer whatever you want because the following course of the events will be the same. 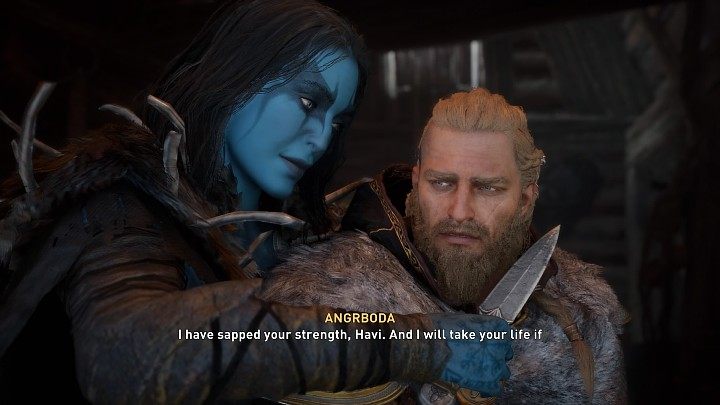 Loki appears on the scene, in cooperation with Angrboda, will attempt to draw Havi into an ambush. The witch will pull out a knife, and Loki will want to know what is going to happen to his son Fenrir. 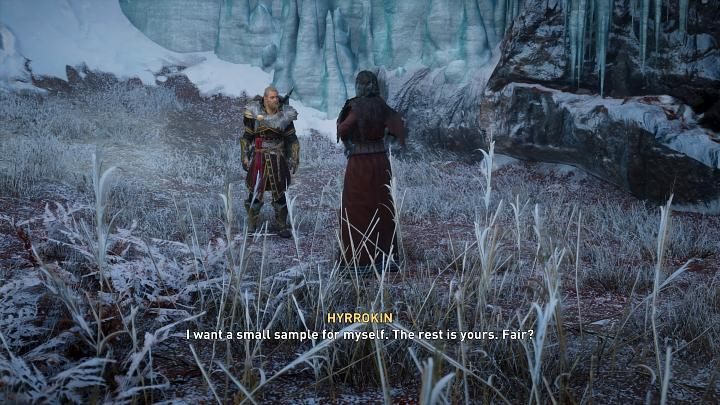 After the conversation, Havi will lose consciousness, and after some time, he will wake up entangled by the roots of Yggdrasil. You will be released by Hyrrokin, who wants to help in the search for mead, but in exchange, he wants a small dose of the specific.

After the conversation, the mission will end and you will receive 5,100 XP as a reward.