On this page of the Assassin's Creed Valhalla guide you will find a detailed walkthrough for the Clues and Riddles mission.

Accused of violent assault, Eivor must discover what happened to Tewdwr after his bloody disappearance. 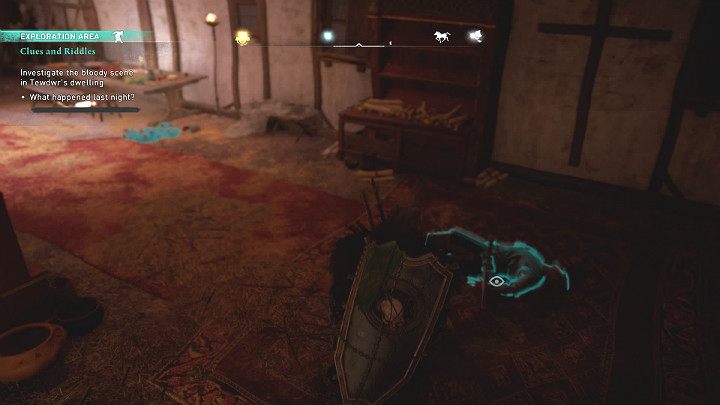 After a night out, Eivor wakes up in Tevdwer's hut and notices that a dead guard is lying on the floor. When you examine the corpse, Eivor finds that he was killed with a knife. 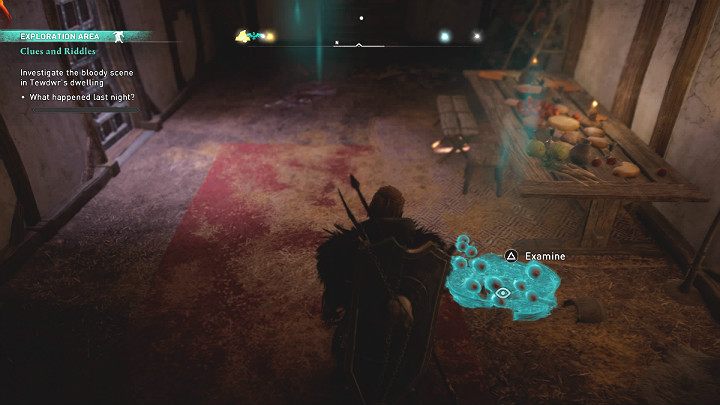 The second trace is a broken jug with traces of blood. Apparently, it was used in combat as a weapon. 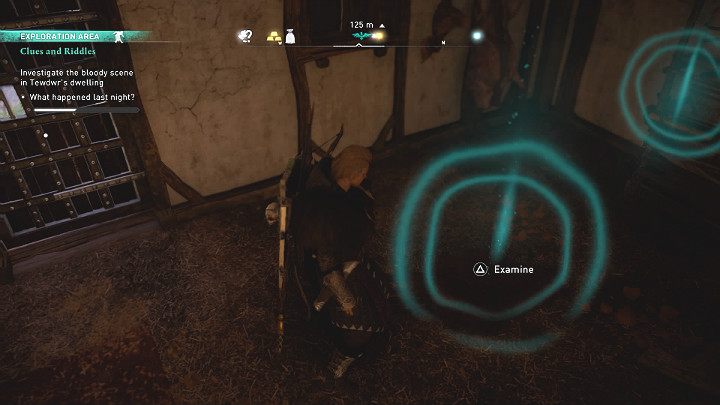 The third clue are the traces of blood. A body was dragged across the floor of the hut, possibly one of Tewdwr's. 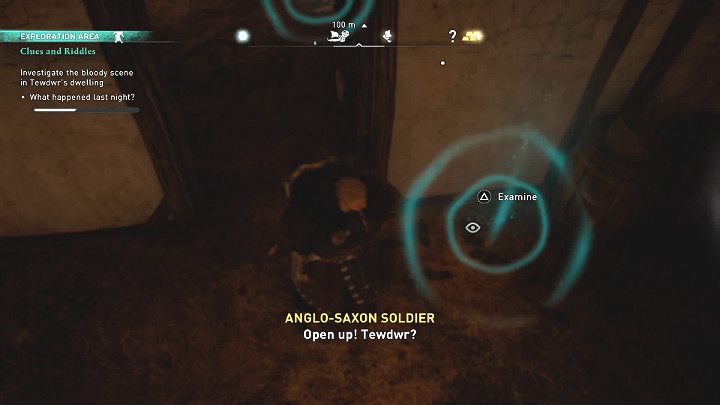 Move the heavy bookcase to access the next room of the cottage, where you will find another clue - the traces of muddy feet, which indicate that someone was here. 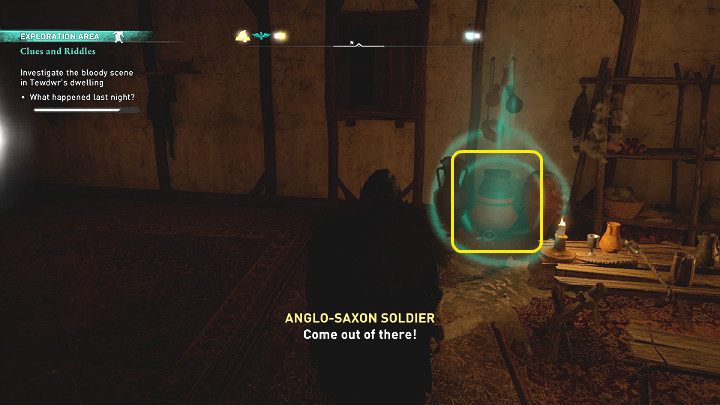 You will find the last clue in the middle jug. When you break it, you will be able to pick up Gwilim's (Tevdwer's friend) herb purse. It is possible that it bears traces of "something stronger" that the monk gave them during the night.

Find and speak to Modron

Eivor takes the herbal pouch he found in Tevdwer's hut and wants to show it to the local healer, Modron. 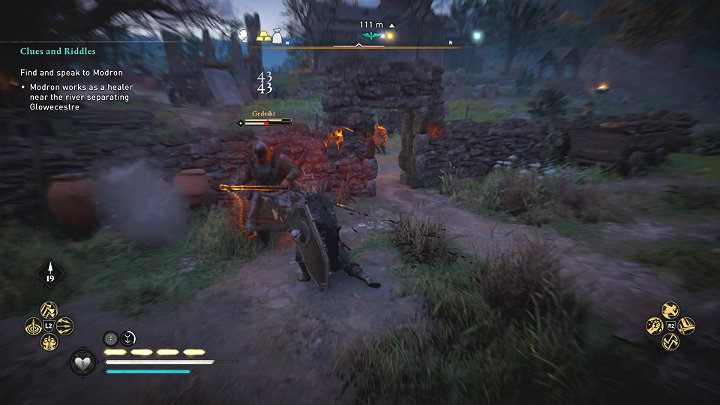 After you go outside, Eivor will be accused of what happened to Tewdwr. When he asks for a chance to prove his innocence, Cynon orders his people to kill Eivor. Defeat all the guards. 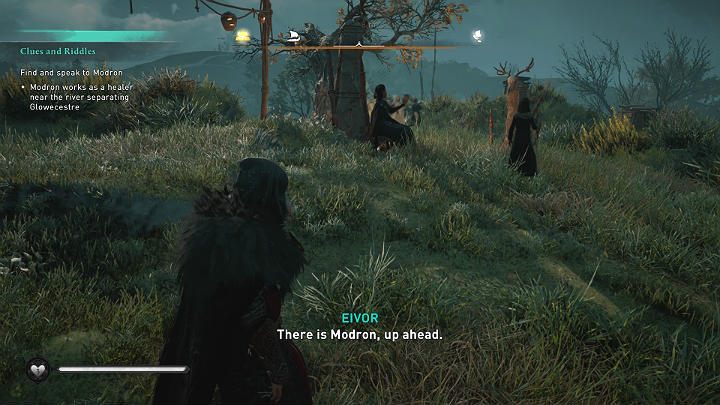 After the fight, sneak up to the river bank to talk to Modron. When you show the woman the purse you will find out that it is a very unusual blend of herbs, which a druid prepares for sleeping problems. 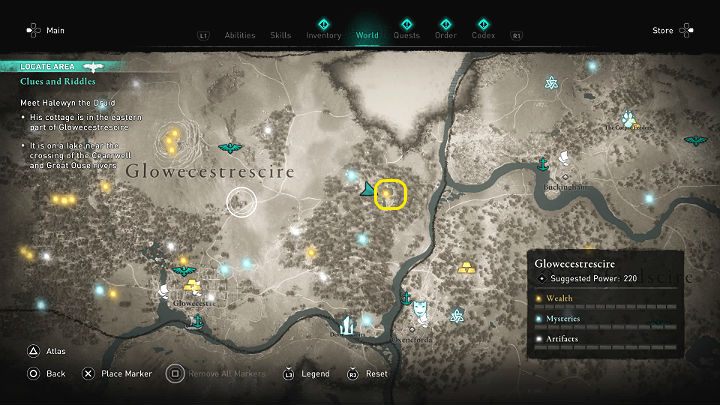 Halewyn's hut is near the lake where the Cearrwell and Great Ouse rivers meet. The building will not be marked on the world map so just go to the place marked on the picture above.

During the further part of this task you have to impersonate the spirit of Mari Lwyd (use a disguise), otherwise, the druid won't want to talk to you. 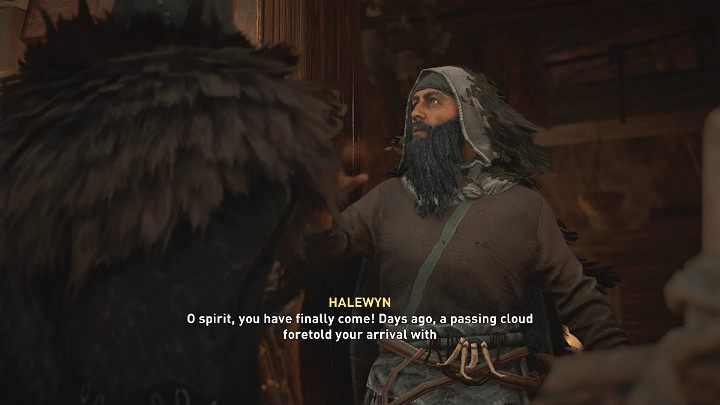 When you knock on the door, a druid will come out, who has apparently been waiting for your arrival for several days. He does not want to know who is hiding under the mask and proposes to start the ritual immediately.

Help Halewyn prepare for his ritual 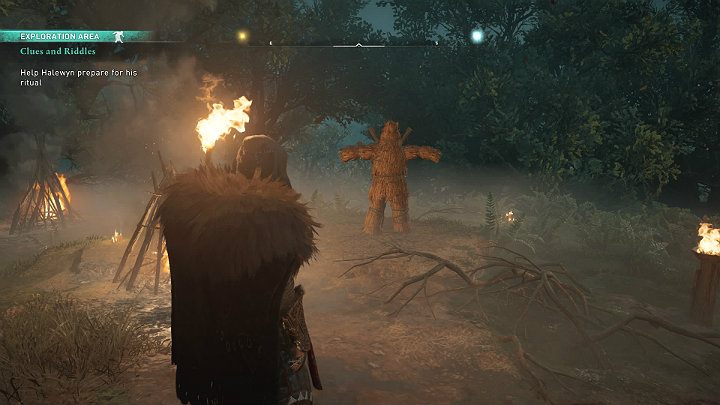 Halewyn mentioned that the coming of Mari Lwyd's spirit should be announced by fire. Use the torch and set fire to all straw effigies. Don't forget the one hanging on the tree and the one tied to a wooden stake. 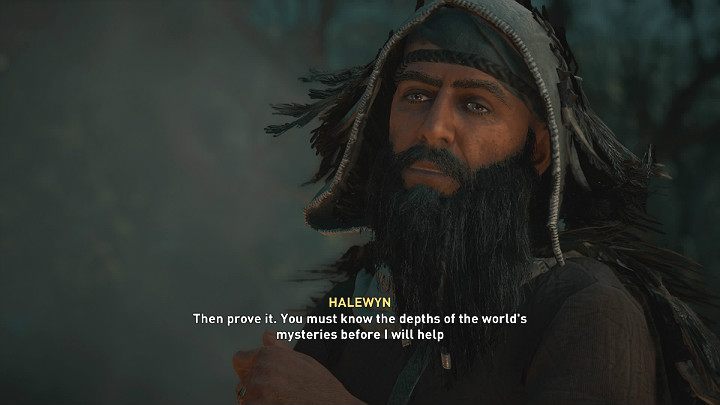 When all effigies are set on fire, talk to the druid. Halewyn starts to suspect something and asks Eivor to prove that he is a spirit of light and convince him that he knows the secrets of this world. You will have to answer intricate druid questions, but first you have to find the right clues. Walk around the druid's hut and use Odin's Eyesight to find answers to the questions you may hear in a moment. 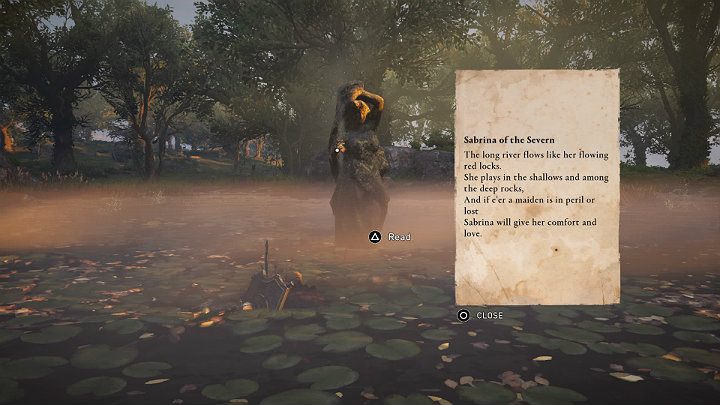 The first clue you will find in the nearby lake. Just look at the statue of Sabrina of the Severn. 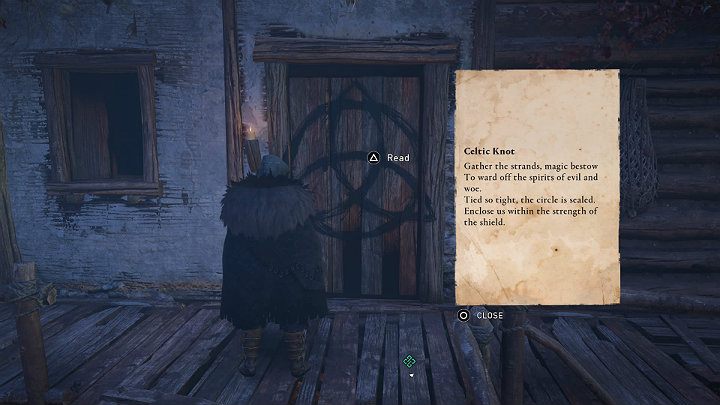 The second clue can be found on the outside wall of the cottage. When you look at the rune painted there, you will read a note about the Celtic Knot. 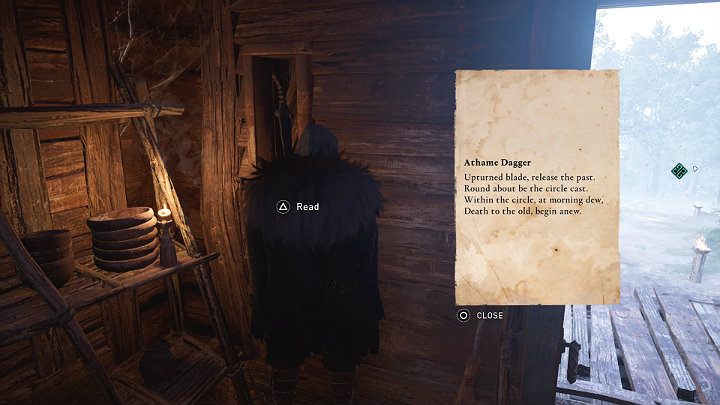 The third clue is inside the cottage. Take a look at the Athame Dagger, which hangs on the right side just next to the front door. 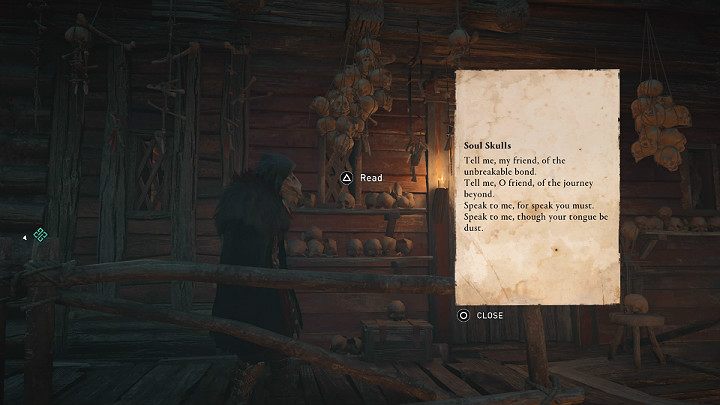 The fourth clue is outside the cottage - Soul Skulls. 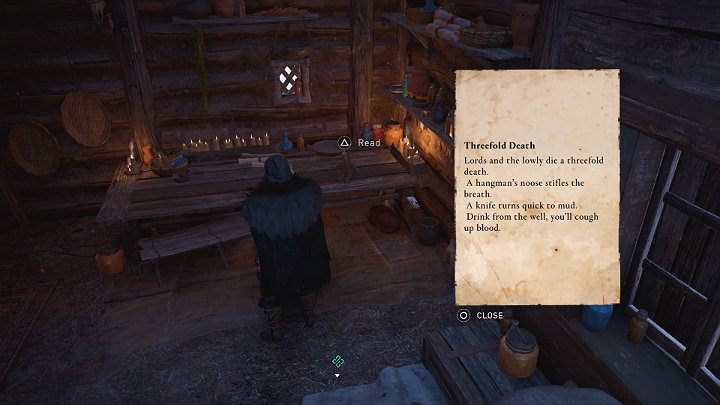 You will find the fifth clue inside the cottage. Come to the table to look at the three faces of Threefold Death: a noose, a knife, and a bottle. 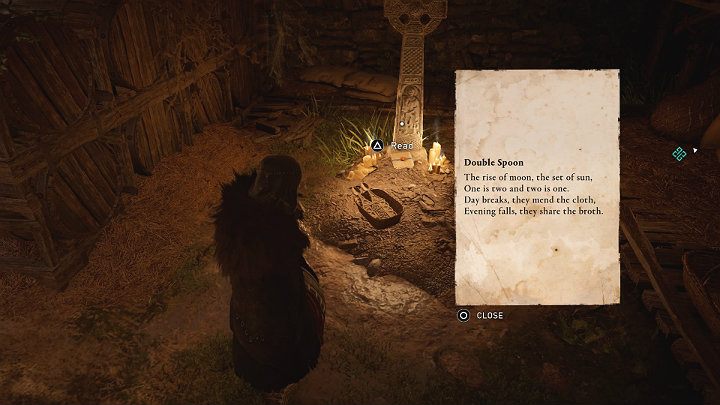 You will find the sixth clue below the druid hut. Destroy the boards visible in the picture above to find the Double Spoon. 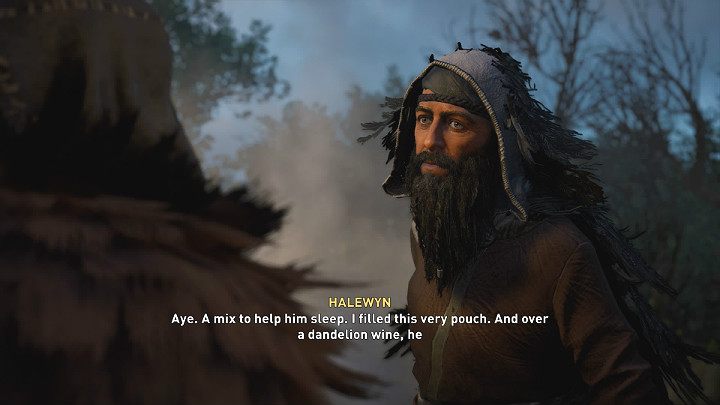 Once you have collected all the tips you can go back to the druid and answer all his questions. Halewyn will answer your question about the purse. He filled it with herbs and gave them to a stranger so he could sleep. When they talked over a bottle of wine, the man was happy to talk about his homeland and about Cudd Lladron. After the conversation the mission will end and you will receive 5 100 XP as a reward.