On this page of the Assassin's Creed Valhalla guide you will find a detailed walkthrough for the First Night of Samhain mission.

Eivor arrives at Glowecestrescire to bless Gunnar's marriage and take part in the celebration of Samhain (a Gaelic feast marking the end of the harvest season and the beginning of winter).

. Find and speak to Gunnar in Western Glowecestre 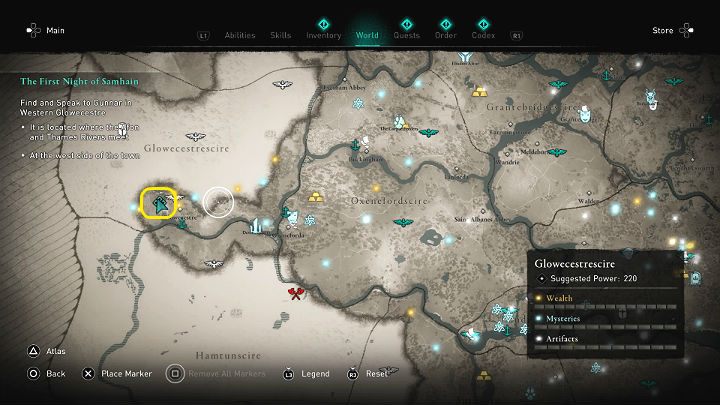 You will find Gunnar in the place where the Afon and Thames rivers connect. This time you will not notice any mission marker on the world map so to save some of your precious time, we have marked this area in the picture above. 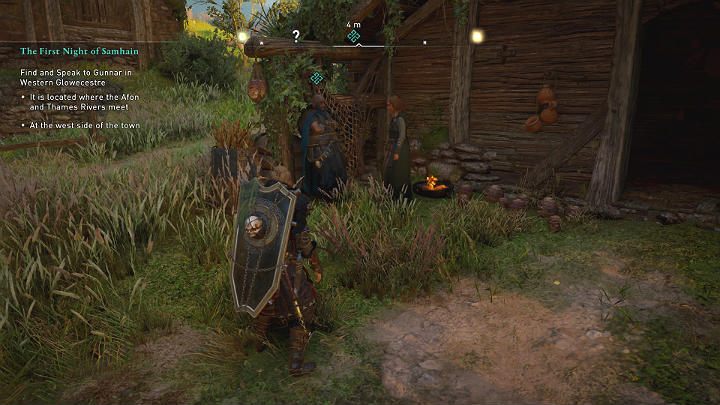 Gunnar settled in Glowecestre with Brigid, a woman who speaks an foreign language. The blacksmith will invite you to a meeting with the local ealdorman to talk about a possible alliance. Get on your horse and follow the blacksmith. 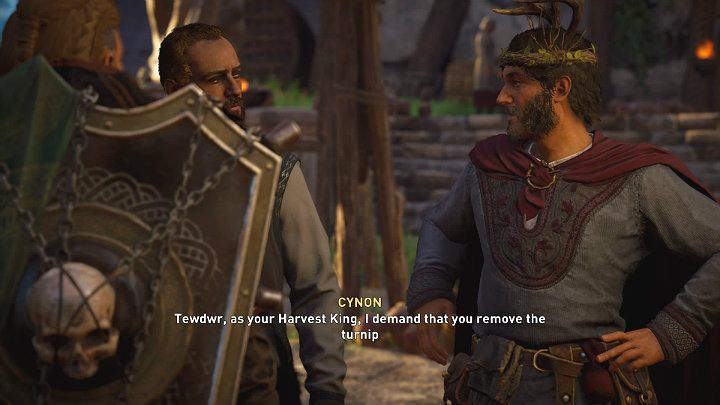 First, you will meet Tewdwer, the future ealdorman. The man does not hide his aversion to the Normans and openly criticizes what Eivor managed to achieve on English territory. After a while, ealdorman Cynon will join the conversation, speaking with much more enthusiasm, kindly welcoming Eivor in Glowecestre. He will ask you to accompany Tevdwer on his journey to the shrine of Saint Kenhelm. Cynon fears that there may be some danger lurking nearby. 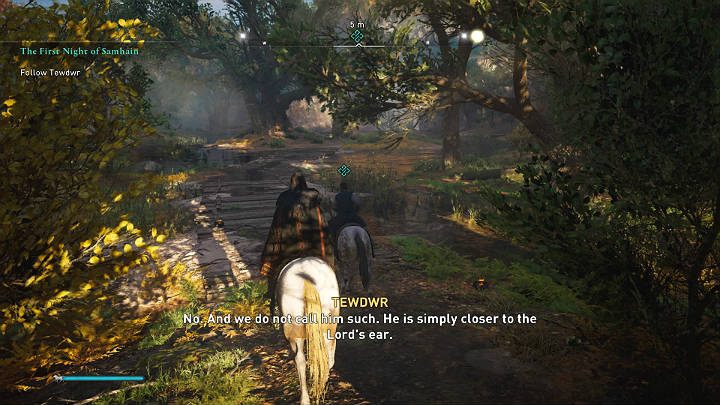 Get on your horse and ride with Tevdwr. On the way, you will be able to hear what the man has to say about the current situation in Glowecestrescire and being under the leadership of Cynon. 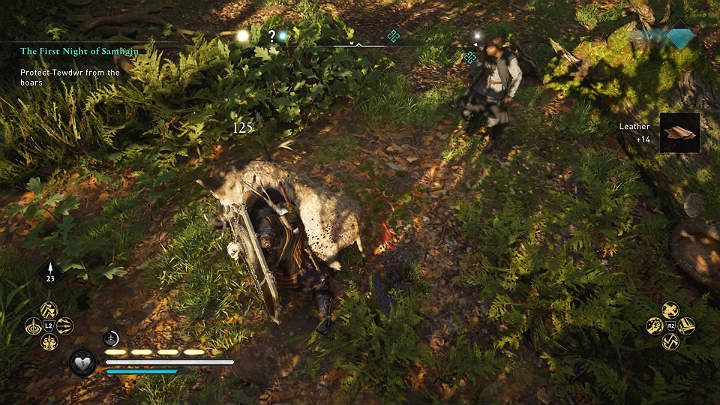 While Tevdwr prays, a group of angry boars appear at the shrine - you need to fight them. After defeating the boars, talk to the man. 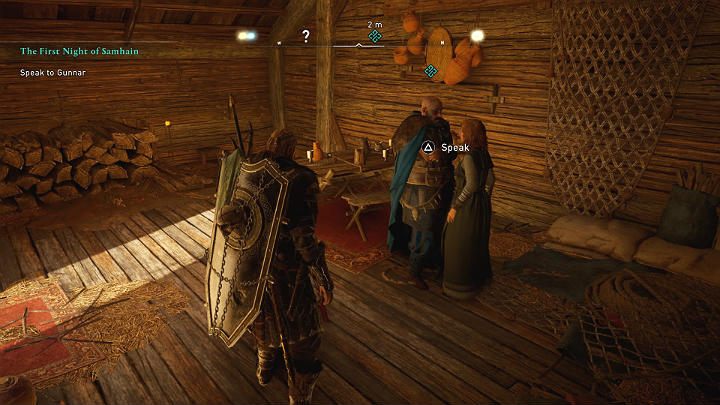 Go back to Glowecestre and talk to the blacksmith. Eivor wears a mask made of horse skull on his head to become the spirit of Mari Lwyd (folk custom).

Knock on doors as the Mari Lwyd 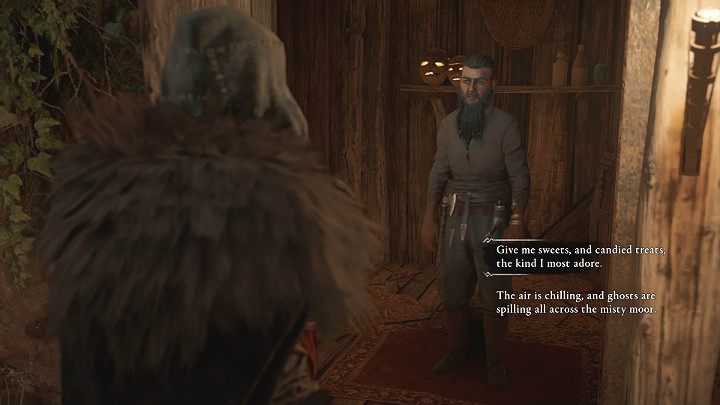 Now you have to play the role of Mari Lwyd and knock on the doors of the local huts to rhyme with the locals. Your task will be to complete the rhyme started by the locals. 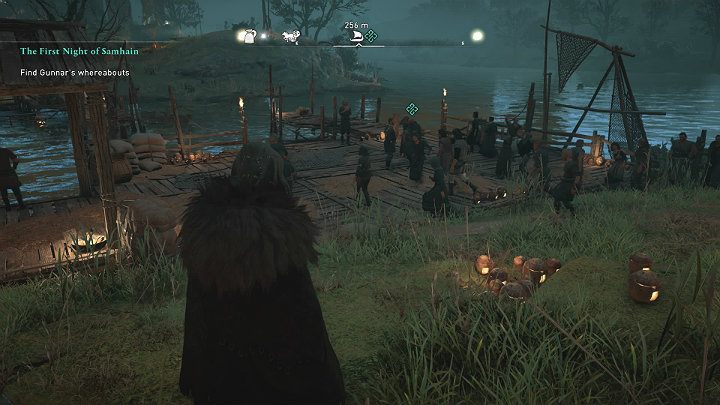 After visiting 3 cottages, Gunnar will suddenly disappear and you will have to find him. You'll find him in the harbor - he is having a scuffle with one of the Anglo-Saxon men there. 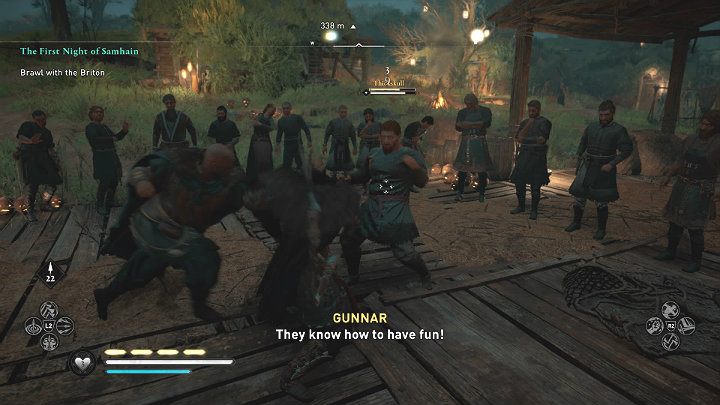 This dispute will not be resolved in a peaceful way, so there will be a rather uneven fight in which you and Gunnar will have to defeat one enemy. 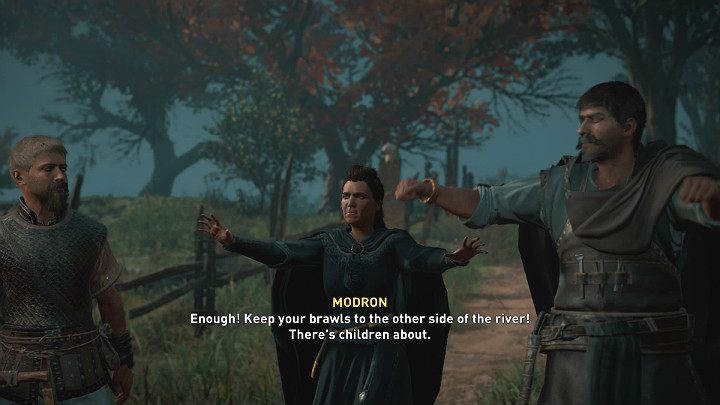 The fight will be stopped by Modron, the local healer. The woman noticed that Gunnar was injured during the fight and will offer her help. 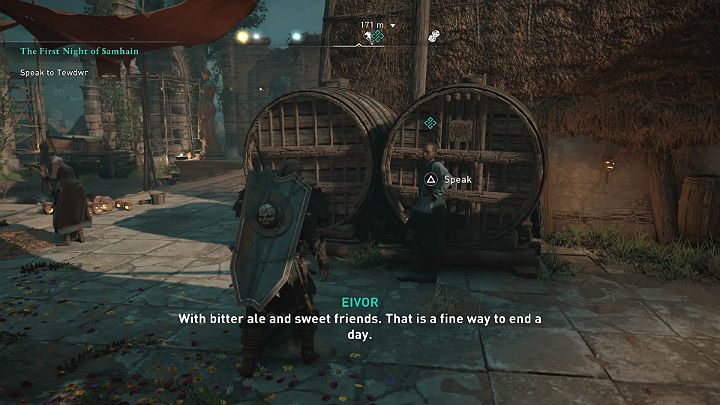 Meet with Tevdwr. The man will invite Eivor to a drinking tournament - you can win or not, doesn't have any effect on the plot. Monk Gwilim, one of Tevdwr's friends, will also join the party. 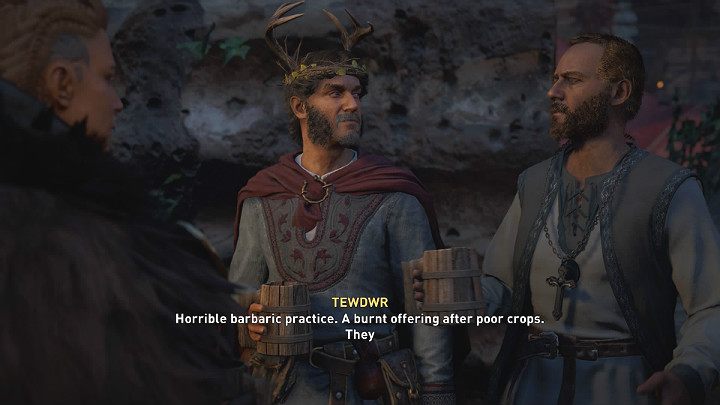 After a while you will be joined by Cynon, who will explain that he is to be sacrificed in a wicker giant as the King of Harvest, like Eladorman Simkin and everyone else who reigned before him. Tevdwr is of Christian faith and describes this custom as a terrible barbaric practice.

After a longer cut-scene, the mission will end and you will receive 8 500 XP as a reward.