On this page of our guide for Assassin's Creed Valhalla you will find a detailed walkthrough for the mission titled Bloody Path to Peace.

Eivor joins forces with Ivarr and Ceolbert to burn Wesberie and hit the forces of Ynyr, King Rhodri's trusted advisor.

Find and speak to Ivarr 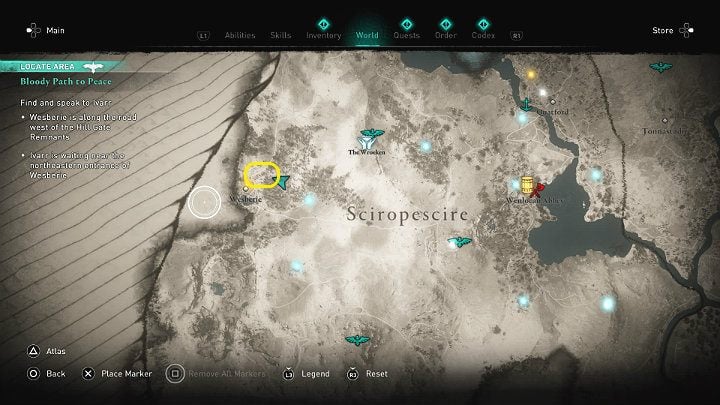 Ivarr and Ceolbert are waiting for you near the north-eastern entrance to Wesberie. The location will not be marked on the world map so to save some time we have marked the appropriate spot on the picture above. 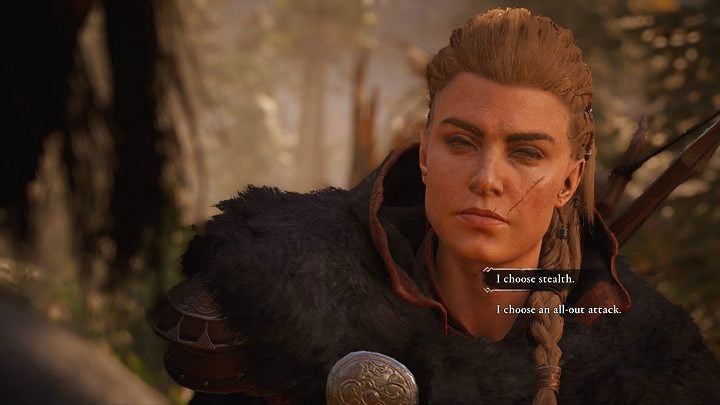 The men lurking in the forest have a perfect view of the enemy camp. Ivarr's plan is very simple - kill all the guards, burn the settlement and eliminate Ynyr. During the conversation you can choose how the task will be performed. 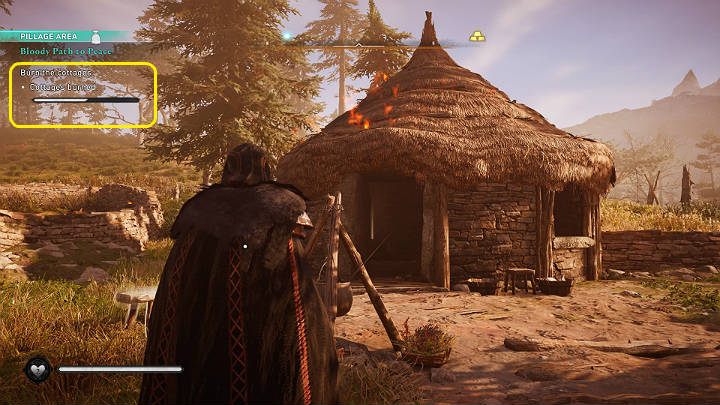 After several buildings burn down, the progress bar will be filled and you will be able to proceed to the next stage of this mission. 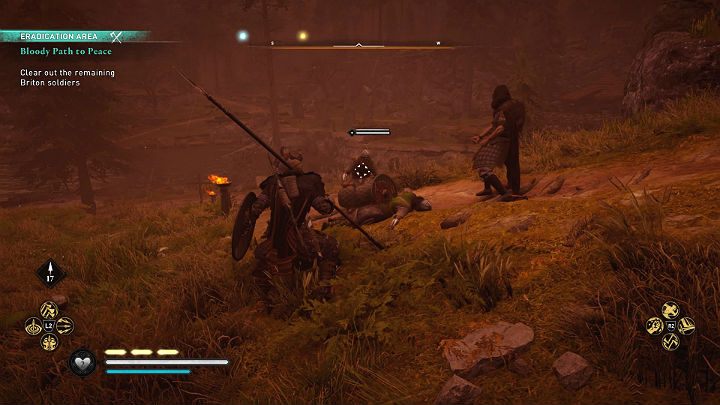 Now you have to finish off all Briton soldiers who are stationed in the settlement.

Kill Ynyr and his men 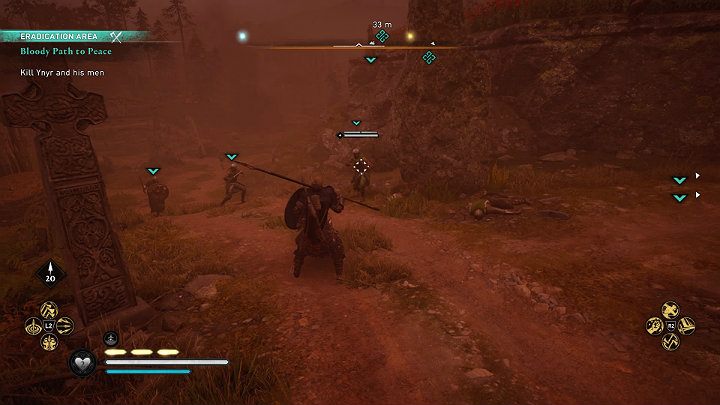 Beat the soldiers who came to the settlement together with Ynyr first. You will find them in various places in Wesberie. 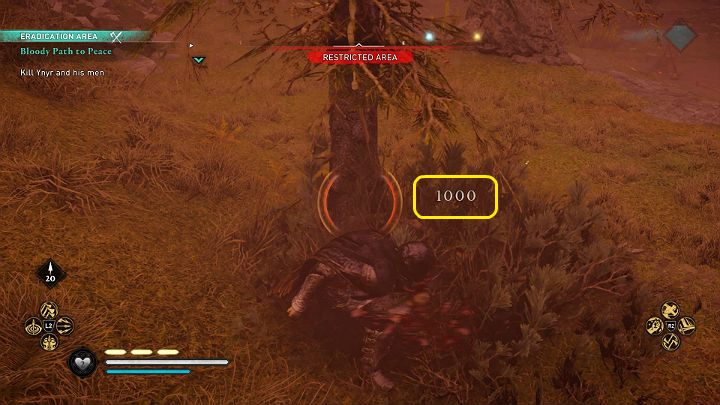 You will find Ynyr at the center of the village. He is surrounded by a large group of bodyguards, so it is worth eliminating them first. Ynyr is not a boss so the fight against him is the same as a duel with a standard elite unit. The opponent uses a pike and a two-handed sword so he has a very large attack range. If you manage to get behind him, you can use the ability to assassinate commanders and finish him off with the Hidden Blade. 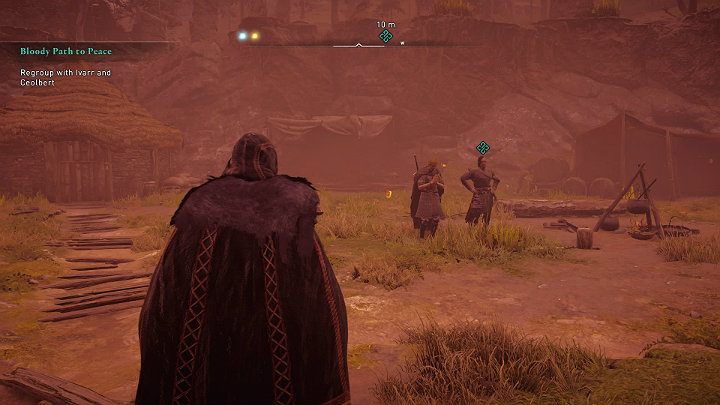 After the fight is over, go to the edge of the settlement to talk to your friends and discuss how Ceolbert did during the attack.

Despite being satisfied with his victory, Ceolbert is not entirely convinced that murdering people and burning villages is the right way to peace. To think and calm down a bit, he goes fishing and Eivor accompanies him. 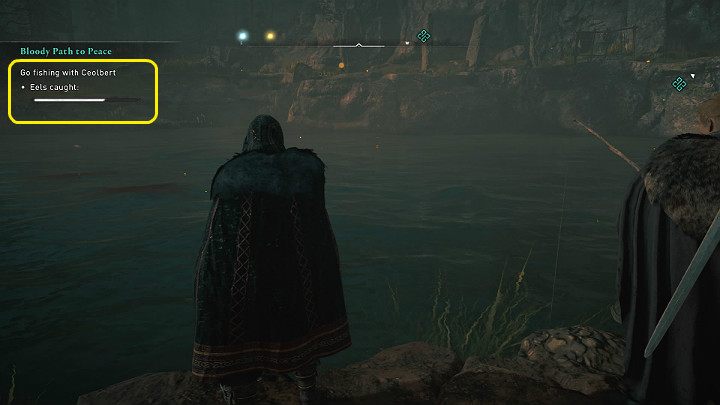 Now you will have to catch a few eels with a rope or just shoot them from the bow (which is much faster and easier). Drop the line and wait for the fish to catch the lure, then pull the line and drag the eel ashore. 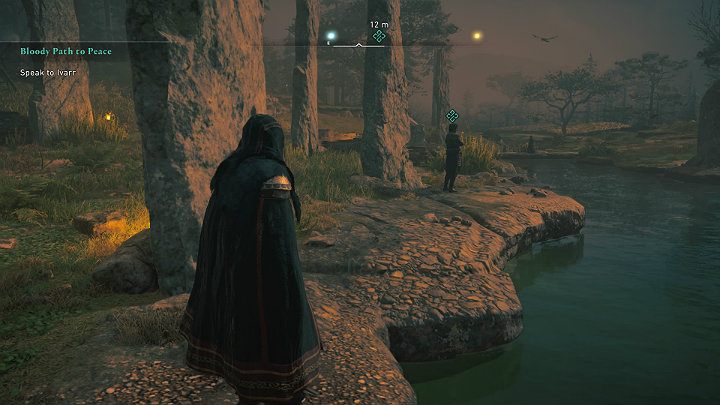 When you catch three eels the task's progress bar will breach 100% and you can talk to Ivarr. The bishop will join the conversation and together with Eivor he will try to get Ivarr to keep his emotions in check during the peace talks. 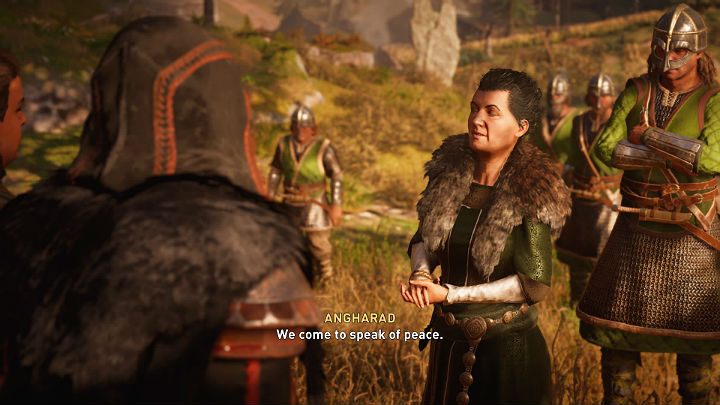 After a short cut-scene there will be a conversation with Lady Angharado, who came for the peace talks. However, King Rhodri stayed in his castle. The woman promises to withdraw her troops in exchange for an immediate cessation of any hostile actions.

Find and speak to Ceolbert

Ceolbert was not there where peace conditions were discussed. Last night he went hunting and has not returned since then. 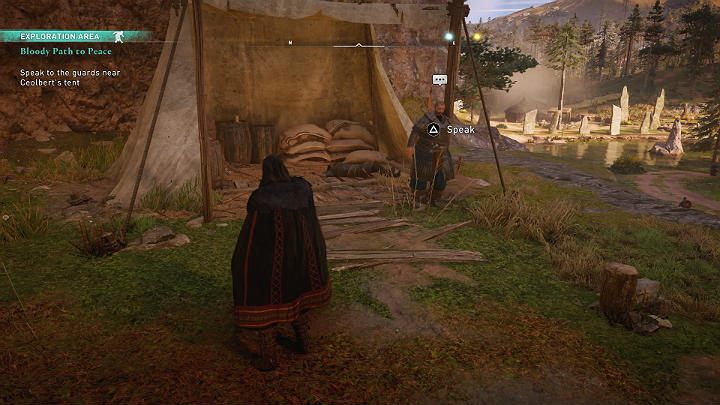 Ceolbert will not be in his tent. Talk to the guards who are stationed nearby. Unfortunately, the only witness who last saw the boy alive is dead drunk. If you have level 3 charisma you will learn from his brother how to wake him up. If not, you can still take the following step to get the warrior on his feet. 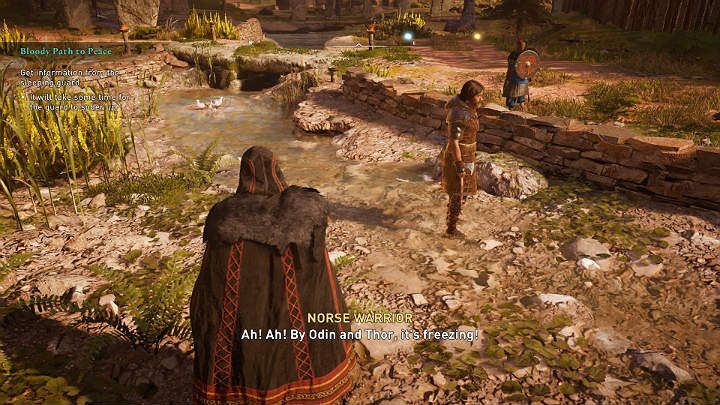 Pick up the drunken guard and take him to the shallow stream right by the tent. Throw him into the water there and the man will sober up immediately. 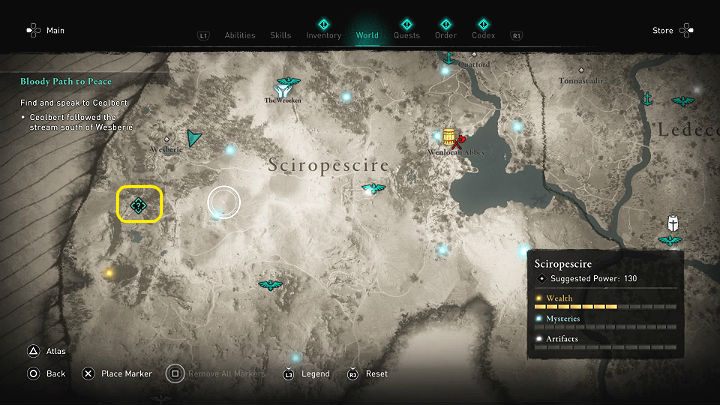 Ceolbert was last seen near a cave, south of the settlement. Go to the place marked on the world map.

Search the cave and find Ceolbert 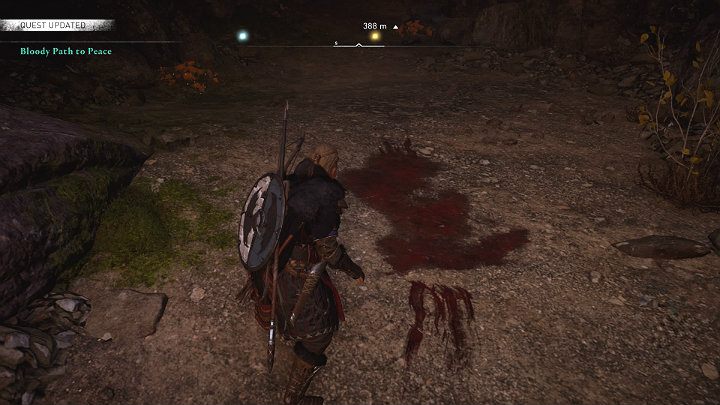 Once there, you will notice traces of blood. Enter the cave and proceed until you reach a larger cavern with the body of a dead wolf. 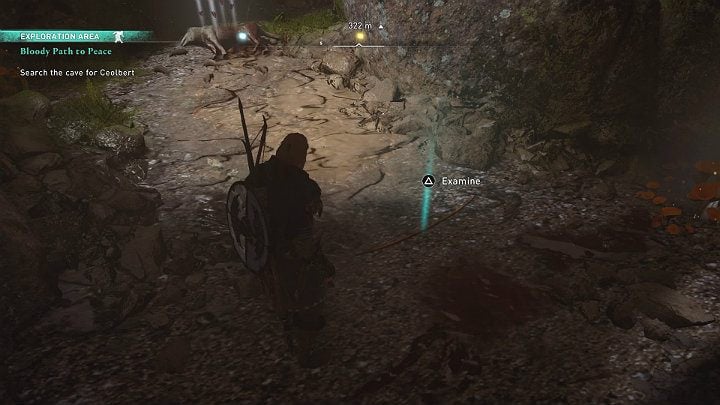 You will find Ceolbert's bow there, but there will be no trace of the boy. Go further into the cave. 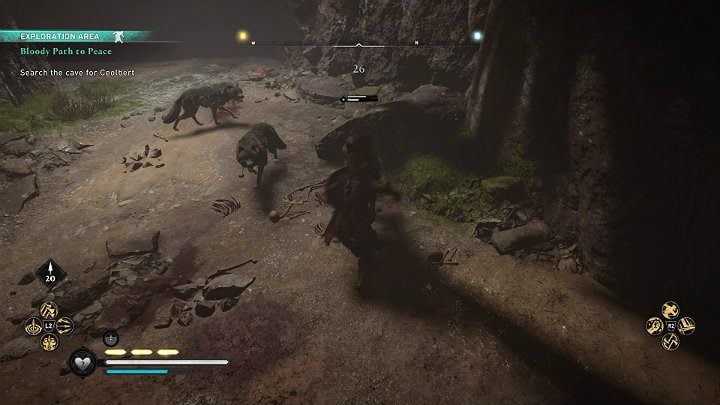 A little further on you will come across several wolves and you will find another clue - blood and traces that point to a wolf that dragged something on the ground. 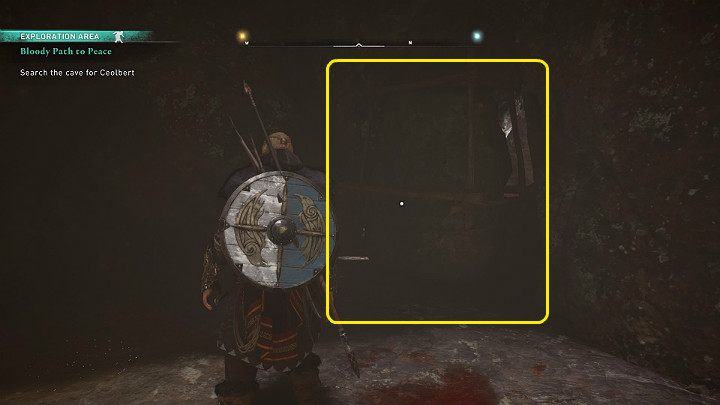 Move the stone blocking a passage in the wall on the right and enter the next cavern. 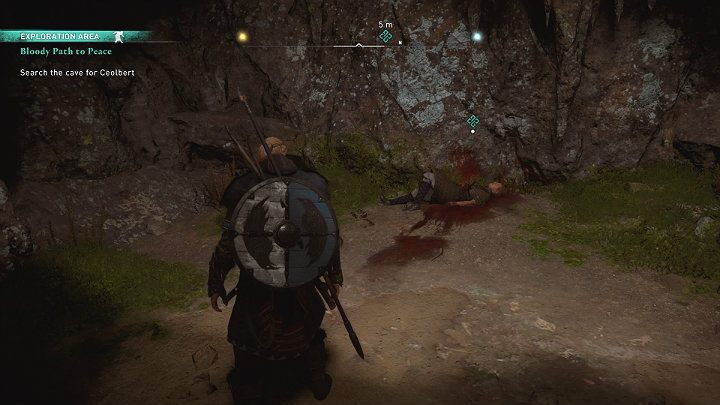 You will find Ceolbert's bloodied body there. The boy is still alive, but he's in critical condition. Next to the boy you will find a dagger with the Briton coat of arms - apparently they do not long for making peace as much as they say. 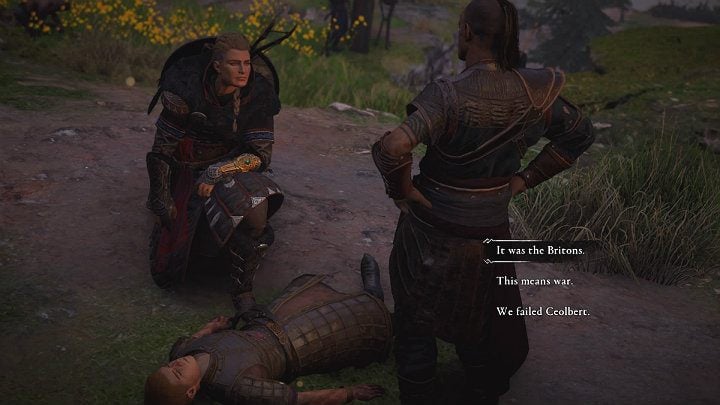 Take Ceolbert on your back and take him out of the cave, then call the horse to get to Wesberie faster. When you get to the boy's tent you'll trigger a cut-scene. Ceolbert will die and Ivarr will demand an explanation.

After the conversation, the mission will end and you will receive 5100 XP as a reward.