On this page of Assassin's Creed Valhalla's game guide you will find detailed rules for playing a game of dice called orlog. You will learn how to win the orlog mini game. We also prepared various tips and hints for orlog. In addition, you will find a list of all 19 orlog players. 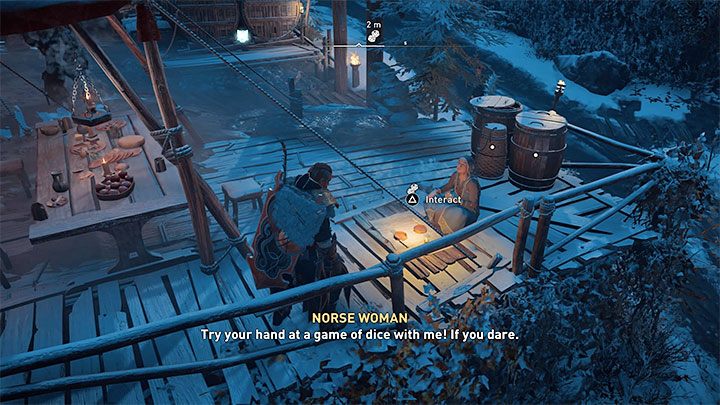 Orlog is the mini-game in which special dice are used. It's quite extensive and getting a hang in it may take you some time.

Orlog is a game for two players. In Assassin's Creed Valhalla there is no multiplayer mode, and you have to limit yourself to playing with artificial intelligence. However, Orlog is also supposed to get a physical release (on similar terms to the Witcher's gwent), so it will also be possible to play it on table top.

You don't play orlog by betting your own silver. You can play as many rounds as you want without paying anything and losing anything. However, if you win, you can hope for a prize, which will be a unique new God Favor (more about it later on). 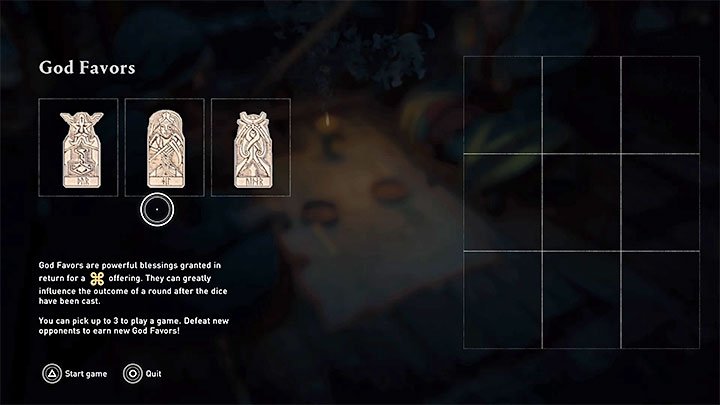 You can choose up to three God Favors when you join each game . If you already have more than three Favors, you must choose your favorites, which you use most often.

Each favor has a different, unique effect. Some favors may be offensive (e.g. Taking stones/health away), while others may be defensive or healing (e.g. recovery of some of the lost stones).

Each unique wing in a game of orlog (i.e. a win with another player) is rewarded with a new God Favor. The newly unlocked favors can be used in all subsequent games. 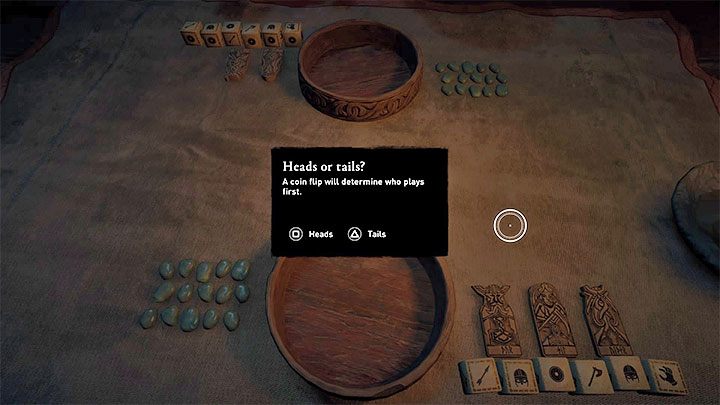 Whoever starts the game is decided by a coin toss, and you can bet wether it will be heads or tails. If you bet the correct side of the coin, you will be the first to cast the dice. It's worth noting, however, that for the sake of balance the order of throws changes in subsequent rounds (within the same game). 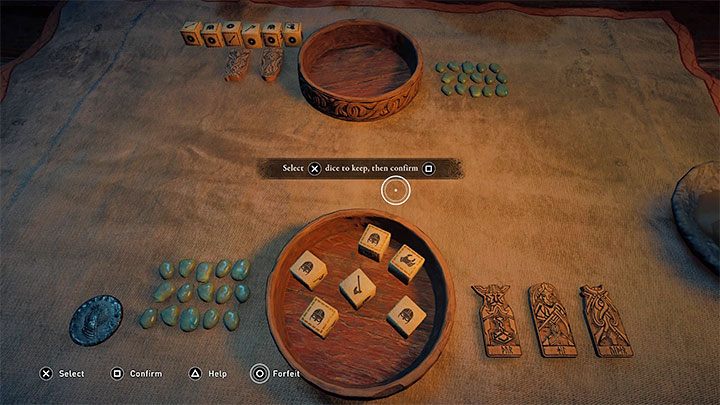 In Orlog, two players who are throwing dices in turns are facing each other. The dice used in orlog have different icons. They represent:

Additionally, each of the listed symbols can be surrounded by a frame denoting that an additional token can be obtained, and can later be used to activate a God Favor.

Preparations for the final round within a given leg last 3 turns. In the first and second turn, you can choose which dice symbols you want to leave and which you want to cast again with hopes of scoring a different symbol. If you're going to cast dice in the third turn as well, you have to take into account that the symbols on the dice will be automatically selected and you will not be able to make any changes.

It is recommended to react to dice cast by the second player. For example, if you see that the opponent has left on the field dice with an axe icon, make sure that you will leave dice with a shield icon that will block this attack. 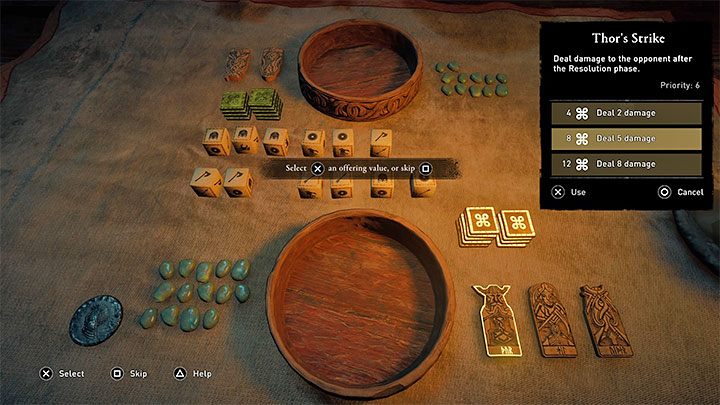 One of the most important features of orlog is the option to use the so-called God Favors. To activate them, you need tokens, but it's never a fixed number. A more powerful action connected with the God Favor will require sacrificing more chips.

The tokens can be obtained in two ways:

Note - AI-controlled player can use the same "tricks", i.e. increase the number of their tokens with bordered dice and steal your own tokens.

In Orlog it is important to plan in advance. Each God Favor has several activation variants - you can activate stronger variants that require more tokens (in the example in the picture you can do increasingly more damage). However, you must be aware that the chips may be stolen from you by the other player and that you may not have enough chips at the end of the turn to attach a Favor. 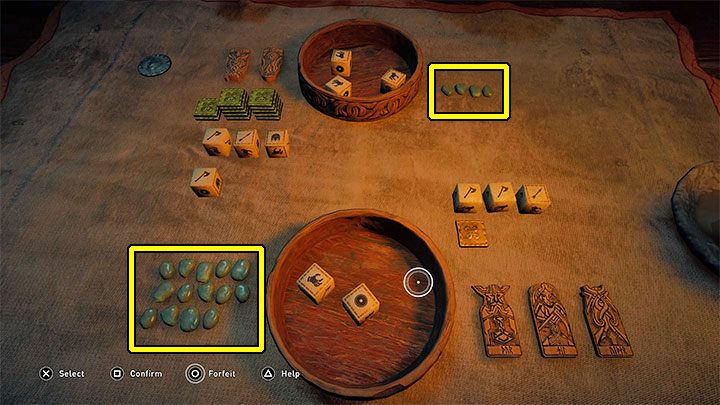 The "Health" of both players is represented by stones. Health points can be lost by: 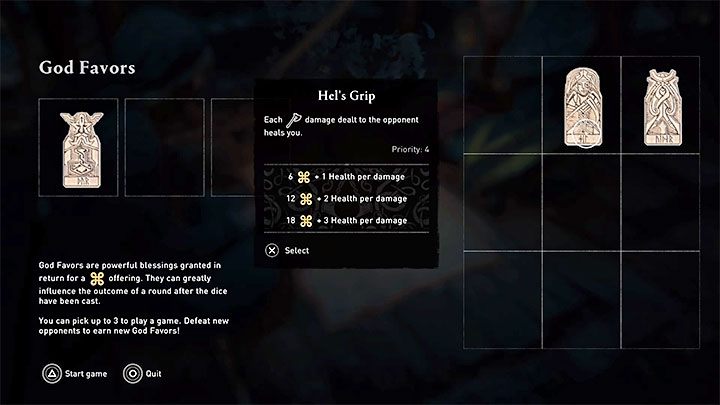 In the game, it's possible to regenerate the lost stones through a God Favor - an example of a favor that allows you to regenerate health is shown in the picture. Thanks to different favors, there are different ways to restock the stones.

The player who is the first to lose all his pebbles loses the game.

Practical tips - how to win in orlog? 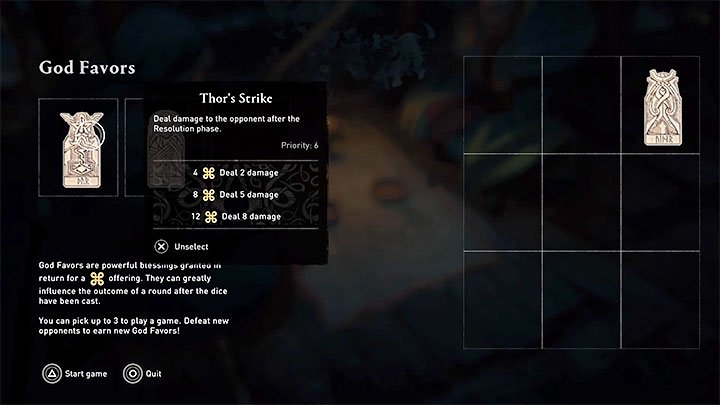 Consider starting playing orlog by defeating two players in Norway. Both of them can be found in the starting region of Rygjafylke - Fornburg and Stavanger. The first match is always treated as a tutorial, but all the others are "serious." Players from Norway don't have a "full set" of God Favors and as a result, dealing with them is good practice before facing more difficult players from England. It will also let you obtain the first useful God Favor.

Thor's Strike isn't the best God Favor in the game, but it's available from the beginning, so it's worth learning to play with it right away; it will beat most beginning rivals with ease.

As we get new figures, it's worth to get some auxiliary favors, matching our style of play. Our experience shows that the Freyja's Plenty (beat the player in Eurvicscire) works well, allowing to throw another three dice on the table for 6 tokens, and Freyr's Gift - beat the player in Lunden), which doubles the score of a given type of dice (those that are most numerous on the table). This last favor can significantly increase the number of tokens you steal, because if there are, for example, 4 hand dice on our side, we can use 8 tokens to steal the same number (8) of tokens from the enemy. Such expense never leaves you at a loss, because in Orlog, it's always better if you have tokens and the enemy doesn't. 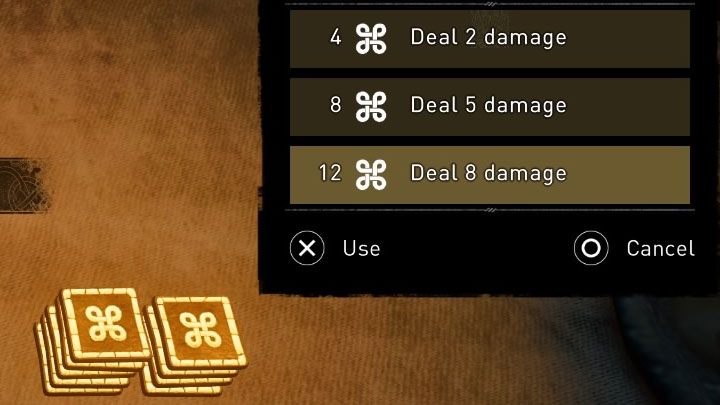 The key to success in Orlog is to collect tokens that will allow you to benefit from a God Favor at the end of all the turns of a given round. The opponent will try to do exactly the same, and there's no way to really help it, so the second primary goal of orlog is to get as many chips as possible from the opponent's hand. For this purpose, we try to draw out of the bowl bones with a border/frame, as well as dice with hand symbol. Ideally, you'll choose bones with a hand and a border at the same time.

In the first round, we always try to collect as many tokens as possible, not worrying about losing our stones. At the beginning of the game and only then, it's impossible to use the God Favors, so the collected chips will pay off later, when we use stronger arguments. The rule of thumb is that in the phase of God Favors, we do not use weaker versions of favors. It's better to wait patiently, collect the required number of tokens and attack the strongest versions of favors we have.

The dice cast is completely random, so the game will not always go our way. Remember that, and make sure to carefully observe the actions of your rival and prepare counter-arguments. If we do not see any hands after the cast, we try to defend against conventional attacks (arrow, axe) or deliver an attack ourselves. This won't win the match, but small blows will help to achieve the final success.

Try not set up a defense without a good reason, unless the defense dice have a border that yields a token. Naked shields and helmets are ultimately the most useless dice: if the enemy doesn't attack, they're a waste of space. 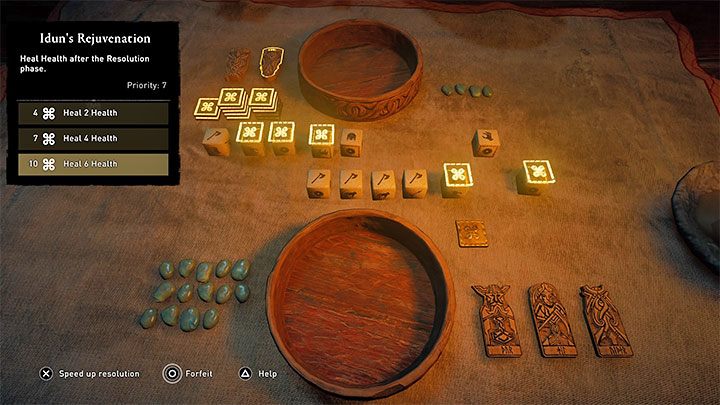 In the God Favor phase, you can use the tokens that are still on the table and it's worth remembering this, because the sum of the tokens may allow you to trigger a grace in a stronger version. If the game marks active Favor selection, it mean's there's enough tokens on the table, but you have to be careful not to misfire, because the game doesn't take in account the tokens that we may lose after collecting dice from the table. In other words, it's best to count the chips that you have, add the chips that appear as bordered dice and those that you get with a dice with hand, and subtract the chips that your opponent will definitely take away – and do it all yourself. This helps avoid unpleasant surprises.

Opponents are mostly very passive and rarely make any well-thought-out moves. As a rule, they try to pull out as many dice with borders as possible, and they only build attacks when they have a lot of tokens and can take advantage of the strongest favors. It's worth to anticipate and prepare for a potential attack by checking what favors the opponent has available. We will never be able to prevent such attacks altogether, but it's just as important to compensate for the losses. It's also worth learning to read the moves of your rival. For example, if the opponent only draws axe dice out of the bowl, it's certain that they will use a favor that will increase the power of melee attack.

In Orlog, it's better not to rely on chance. We cast dice in three turns, even if the opponent or the player choose all the dice from the bowl in round one. In the third turn, we always get the dice we cast, no matter how much we don't like it.

How many players are there in the game? 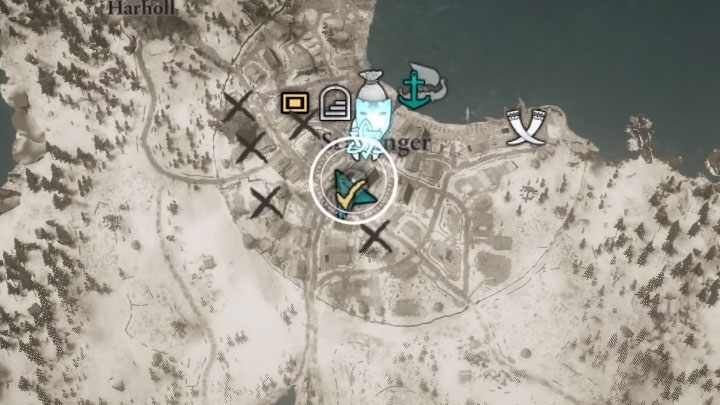 There are 19 different players to beat in AC Valhalla - 2 in Norway and 17 in Anglia. Each defeated unique player unlocks a new God Favor, which you can use from thence on.

Beaten players are marked with a tick (example on the picture). This means that you will not gain anything from playing with this character again.

Winning with all Orlog 19 players from the game world is rewarded with the Orlog Master trophy. You can't miss this achievement, and if you want to play dice, you can only become interested in the topic after you've finished the main story.

In Norway, you will meet 2 orlog players: 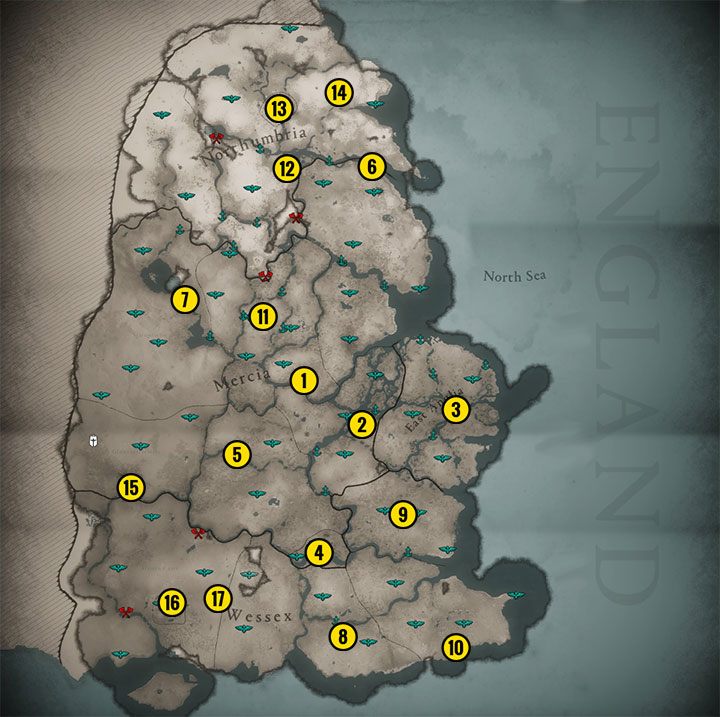 In Anglia, you will meet 17 players in a vacation: