On this page of the Assassin's Creed Valhalla guide, you will find a detailed walkthrough of the Saga Stone quest.

Eivor, Sigurd, and Basim come to occupy the castle of Cyne Belle and to finally conquer the Saga Stone, which Sigurd cares so much about.

Shoot Links to lower the Drawbridge

Lady Eadwyn's fortress is guarded well, and it will not be easy to get into it. First, you must shoot the two weak points of the drawbridge to lower it and open the entrance for your companions. 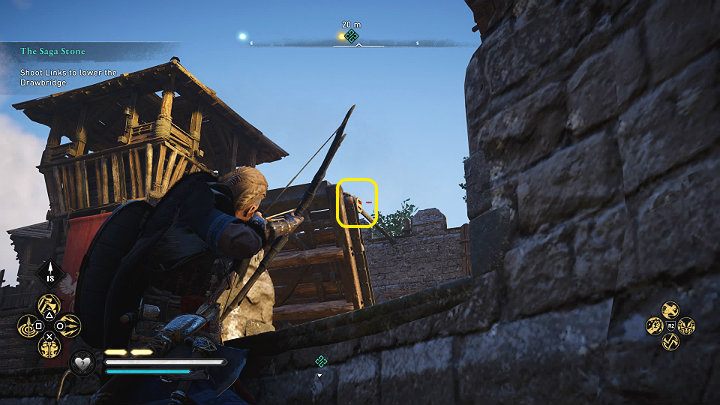 In front of the bridge, you will find one elite guard. Defeat him and then aim at the point visible in the picture above and destroy the mechanism. On the other side of the bridge, there is the same mechanism to destroy. 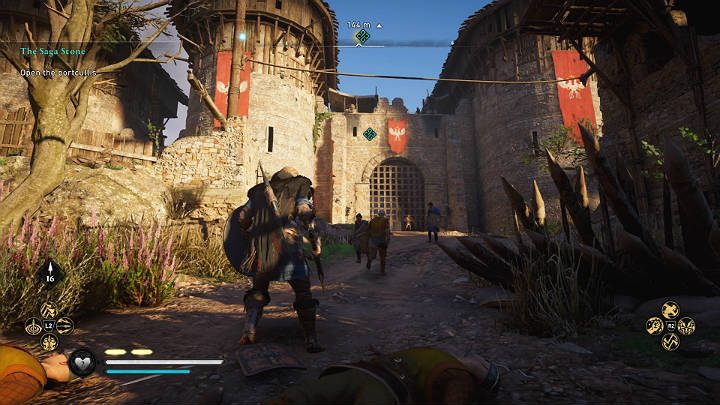 The grille can't be lifted from the outside, so you have to get inside. Run towards the obstacle and climb up the wall. 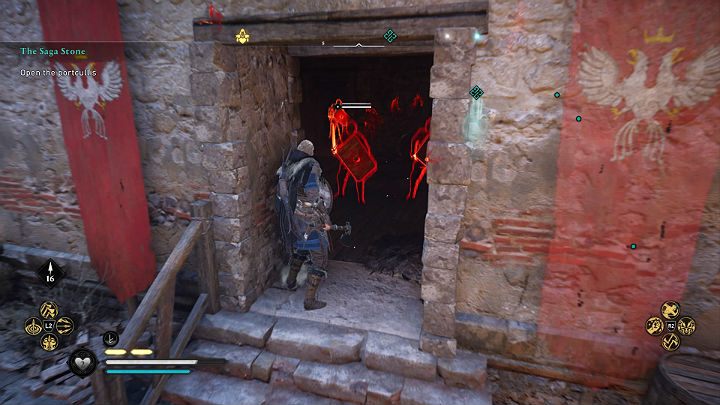 Then go down the stairs on the left or right and enter the room with the mechanism that operates the portcullis. Inside you will run into many guards. 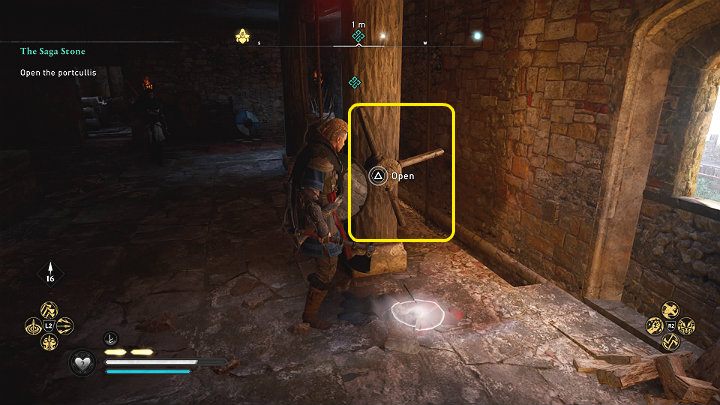 When you get rid of the enemies, approach the turnstile, open the gate, and let your troops inside the fortress. When the gate is raised, go to the inner courtyard.

In the courtyard, the fight is still going on, so it is worth pulling Eadwyn away somewhere where the remaining soldiers won't disturb you during the skirmish. 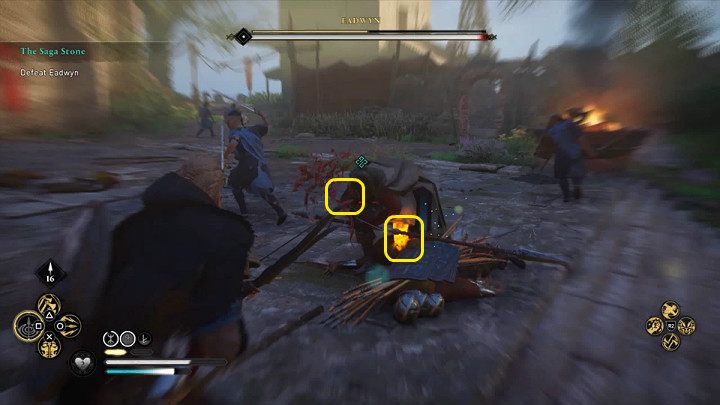 In order to start the duel with Eadwyn with an advantage, it is worth to use the Focus of the Nornir ability and hit your opponent in the two sensitive points - right arm and left knee. 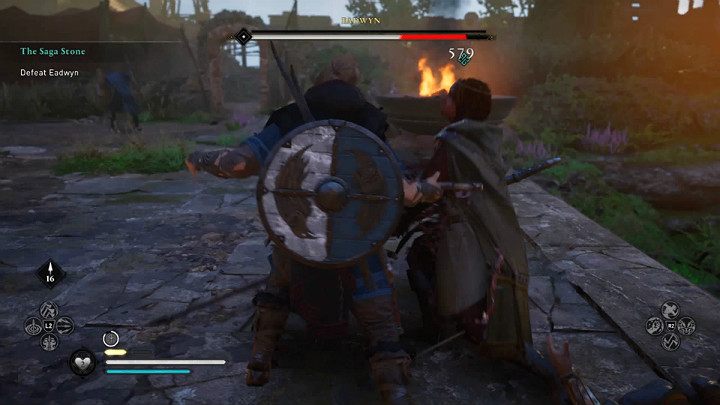 When your opponent is stunned, you will be able to launch a powerful attack, which will seriously damage the health of the boss. 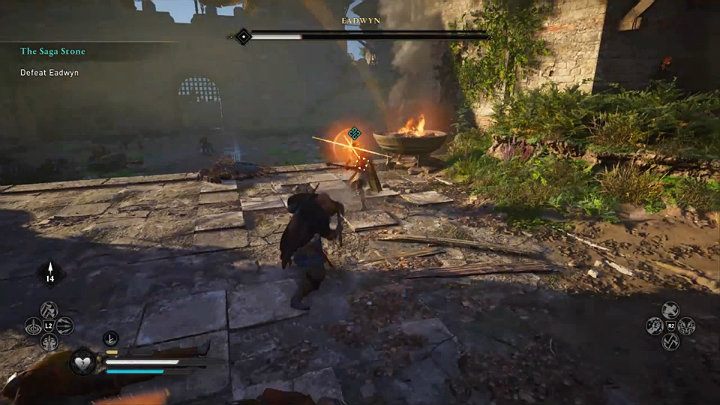 Lady Eadwyn fights with her long spades, so her attacks have a considerable range. Her basic blows are signaled by a yellow flash – these can be locked or paired. 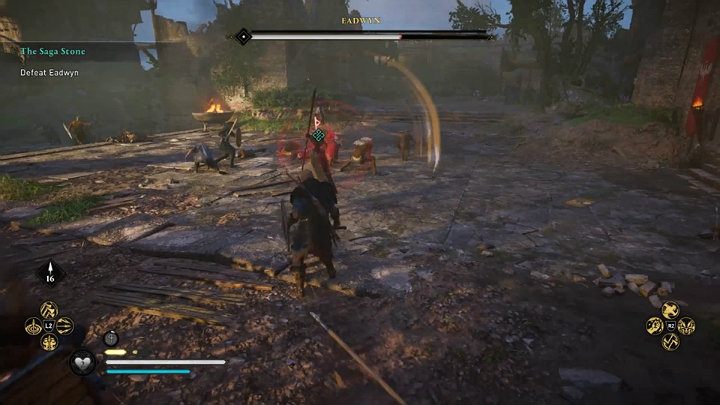 Watch out for the rune's red flash and the powerful overhead strike - this attack can't be blocked, so you have to dodge it. 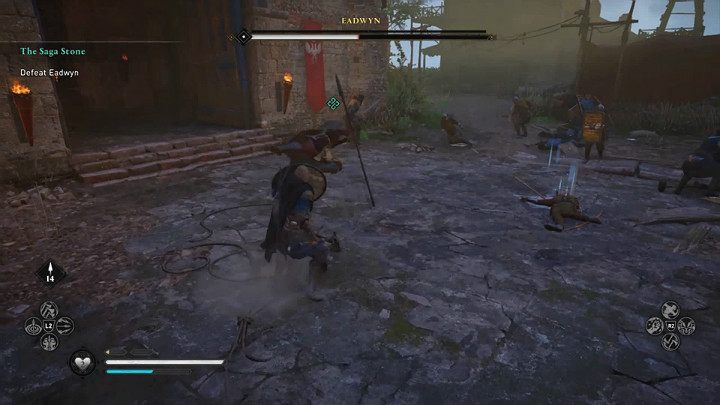 Eadwyn uses some unusual techniques, such as kick after launching into the air using a spear, and can even set up mines on a battlefield. When you enter their range, they will explode, doing quite a lot of damage. 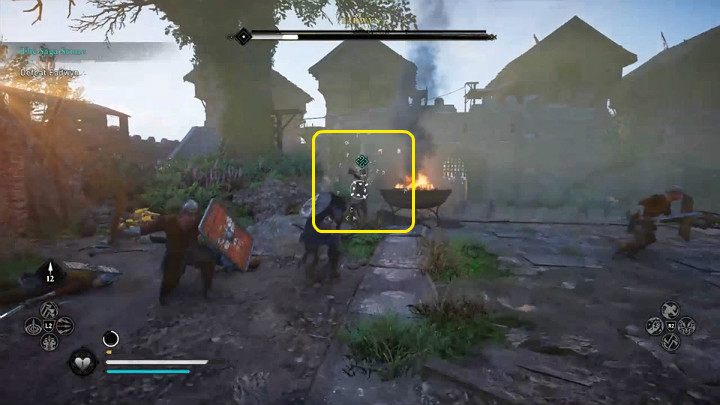 Eadwyn can also use a potion that will start regenerating her health. After using it, the opponent stands still and doesn't attack, and a white aura with different runes appears around her. You have to attack her to stop her from recovering lost health points. 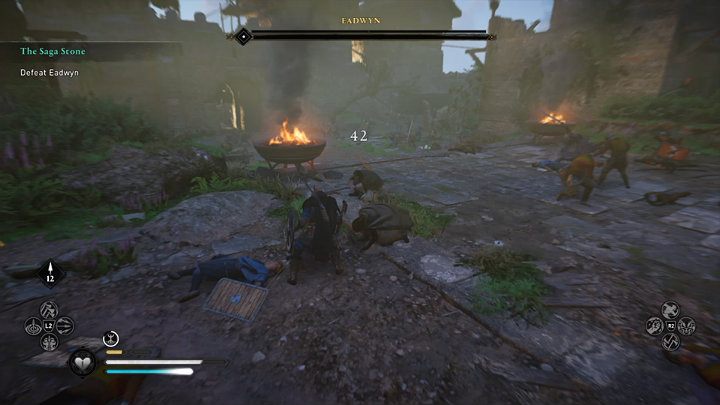 Basim and Sigurd will help you in the fight, so the duel shouldn't take too long. Remember to block or avoid your opponent's blows and look for your chance to counter. In the fight against Eadwyn, the bow also works fine because she won't block the arrows. 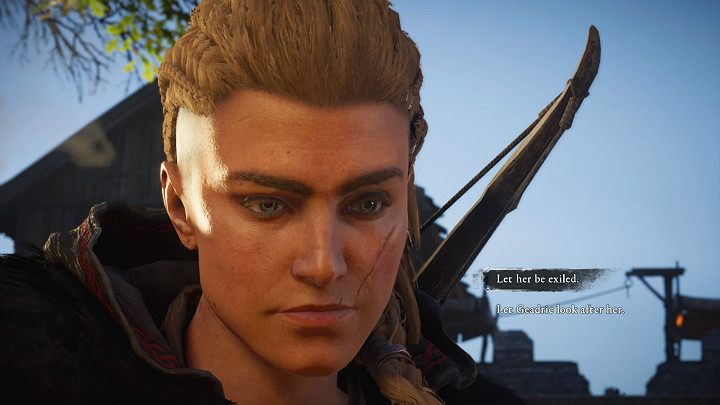 After the fight you will have to decide what will happen to Lady Eadwyn:

If you are wondering if your choice will have any meaning in the further storyline in Assassin's Creed Valhalla, the answer is no. You won't meet Lady Eadwyn on your way.

Regroup with Sigurd, Basim and Fulke 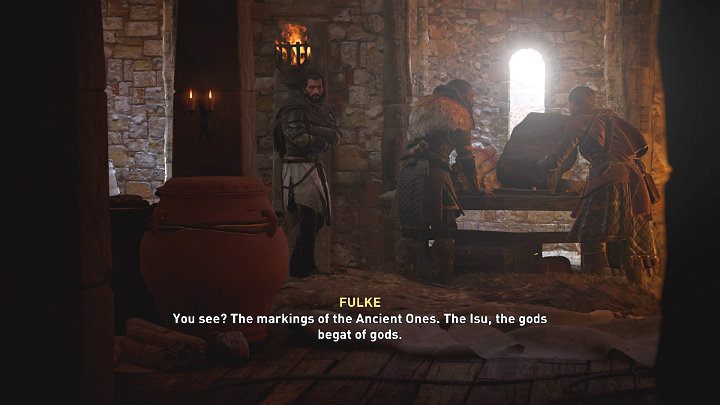 Enter the main tower and then go upstairs to talk to your friends. There you will see a longer cutscene in which Sigurd examines the Saga Stone. You will also witness a conversation with King Aelfred, who learned about Eadwyn's miserable defeat at Cyne Belle Castle and is headed there with his soldiers.

The Saga Stone quest is completed, and you will receive 3 400 XP as a reward.