On this page of our guide for Assassin's Creed Valhalla you will find a detailed walkthrough for the story mission Brewing Rebellion.

Sigurd and Basim are in Buckingham, hoping to form an alliance with the rebellious Thegn Geadric. However, the alliance is not the only reason for their trip to Oxenefordscire. 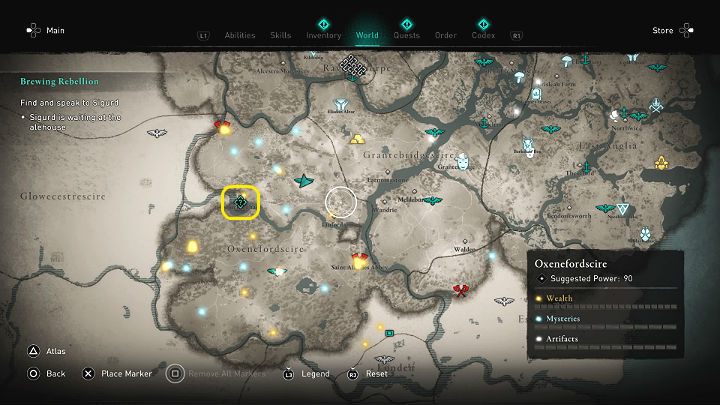 You will find Sigurd in the alehouse in Buckingham. You can easily get there by boat - you will moor at your destination.

As it turns out, Buckingham was taken over by hostile guards so getting to the alehouse will be a bit complicated. You can use a disguise and try not to get noticed or just eliminate all targets. 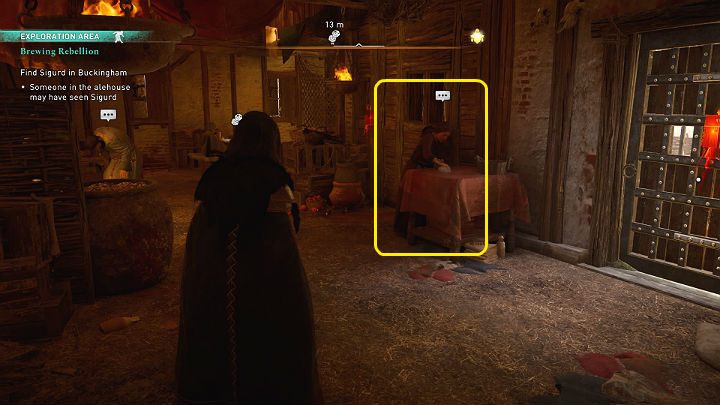 When you enter the alehouse you will notice that, unfortunately, Sigurd is not there. Talk to the woman standing at the door to find out what happened. 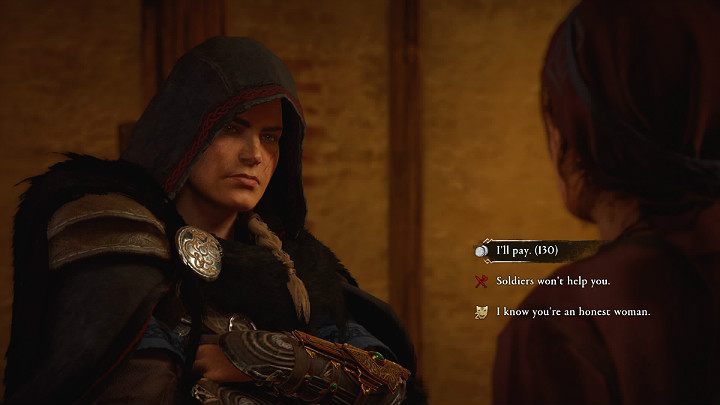 From the conversation you will learn that Sigurd and Basim were talking to Thegn Geadric, and when Lady Eadwyn's men entered the house and a fight broke out, they disappeared. The woman does not want to give away details of where Sigurd went for free. How you solve this case is up to you.

Meet Sigurd at the fish house

Eivor found out that Sigurd and Basim sneaked out of the alehouse through the window and made for the river. They probably hid in one of the fish houses. 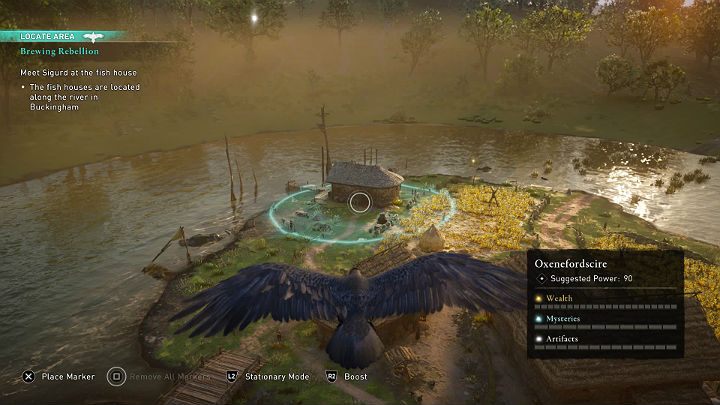 Use the raven to locate a suitable fishing hut, then go to a marked place to talk to your brother and watch a cut-scene.

Although Eivor criticizes and challenges Basim's proposal, and claims that he messing with Sigurd's head, the protagonist decides to help in the fight against Lady Eadwyn. 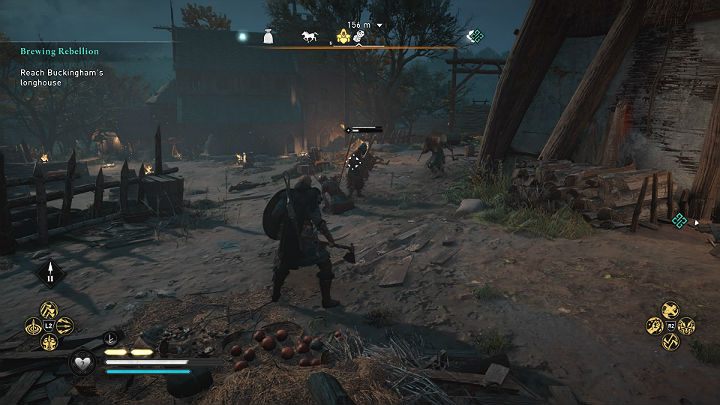 Before entering the longhouse you will come across a group of soldiers. To get inside you will have to deal with them or go around the building from the other side without arousing suspicion. Then break down the door to trigger the next cut-scene. 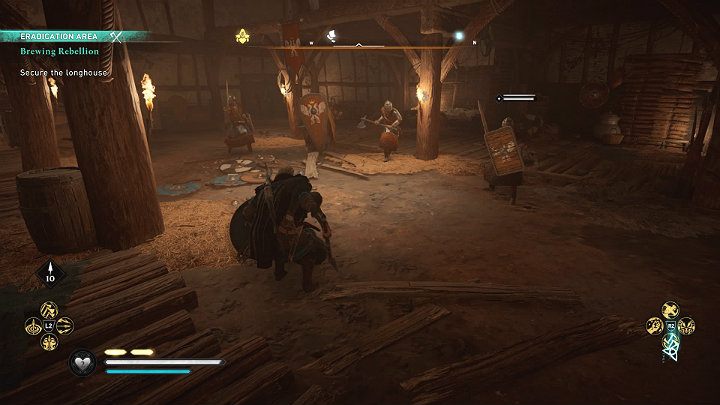 The conversation with Lady Eadwyn will not go well. The woman will go away taking Geadric with her, leaving some soldiers in the building with one elite leader. Beat them to proceed to the next stage of the task.

Find and rescue the thegns 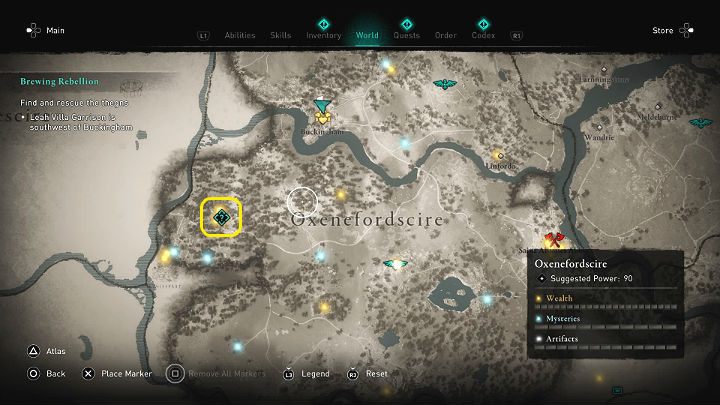 You will find the thegns southwest of Buckingham, halfway to Oxenoford, in the Leah Villa Garrison. 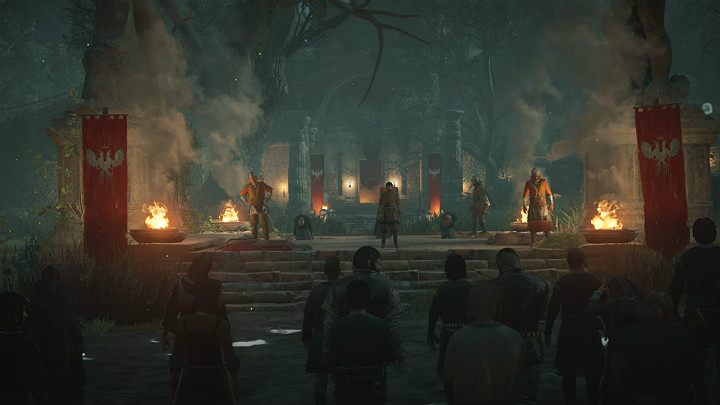 As soon as you approach the main square in front of the cathedral, you will witness a trial in which the prisoners are about to be executed. 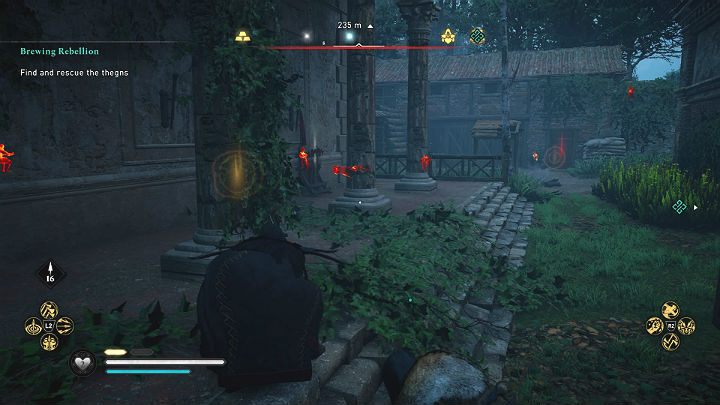 The place is swarming with guards, so if you want to prevent the massacre you will have to deal with them. Pay special attention to the opponents with a red bell icon over their heads and eliminate them as soon as possible - they will call for reinforcements when Eivor is discovered. 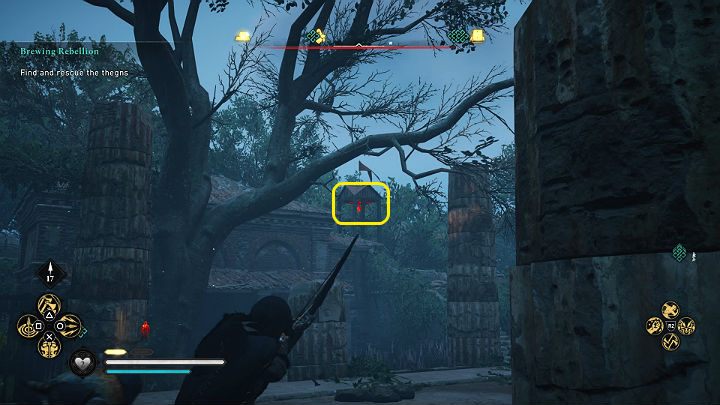 It is also a good idea to destroy the bell completely, so that in case of an accident the opponent would be unable call reinforcements to the square. 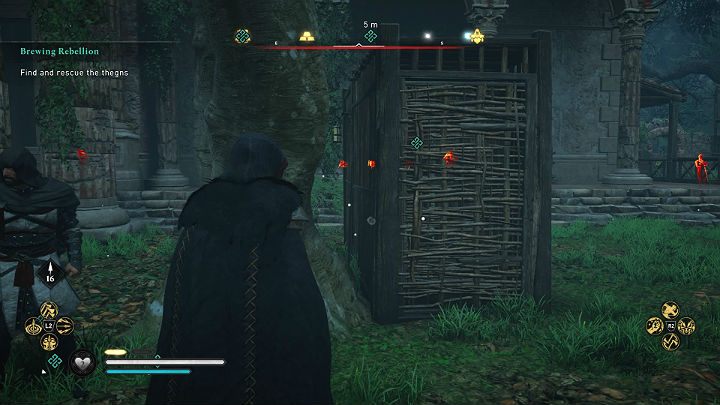 One of the thegns ones is kept in a cage next to the main building. Remember to set him free. 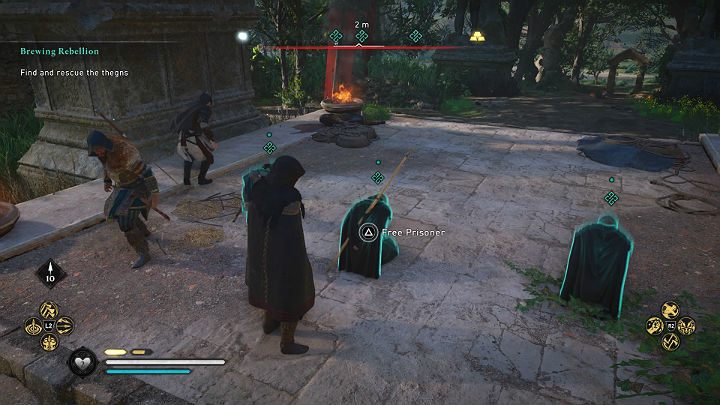 Do not forget about the thegns kneeling on the square. Release them to proceed to the next stage of the task.

Escort the thegns to safety 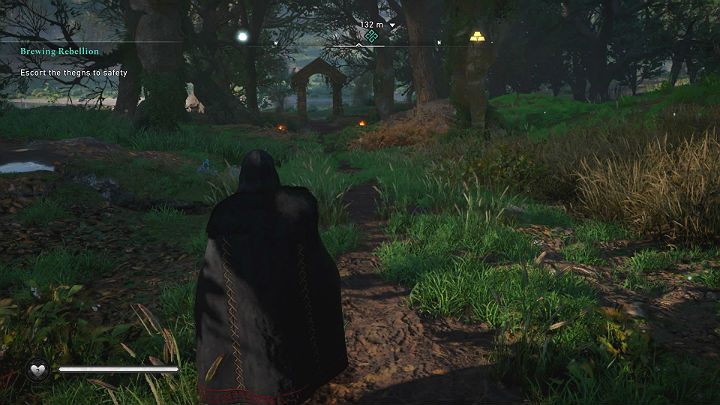 The liberated thegns must now be taken out of the garrison and escorted to a safe place on a clearing by the river. It will be best to avoid taking shortcuts through the forest and follow the marked trail straight from the square.

The escort stage may be bugged. The thegns will not follow you unless they are all gathered together. If, for example, one of them stays on the square, the rest will be waiting for him so you will have to come back for him. If during the escort, NPCs get stuck on an obstacle, such as a tree, and do not want to go any further, they may encounter an invisible wall - just try to get around the invisible obstacle from the other side. If you can't bring the NPCs to the designated place in any way, try to load the last save. 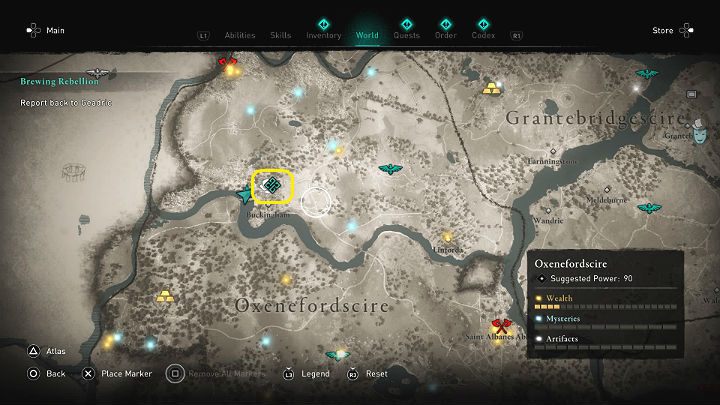 The thegns are free and willing to fight against Lady Eadwyn. Come back to Buckingham (it would be best to use the fast travel option) to talk to Geadric and complete the mission. As a reward you will receive 6800 XP.