On this page of our guide for Assassin's Creed Valhalla you will find tips and tricks on how to create the best character build for Eivor, whose specialty is assassination, i.e. efficient elimination of opponents through stealth attacks.

Warning - some battles are mandatory 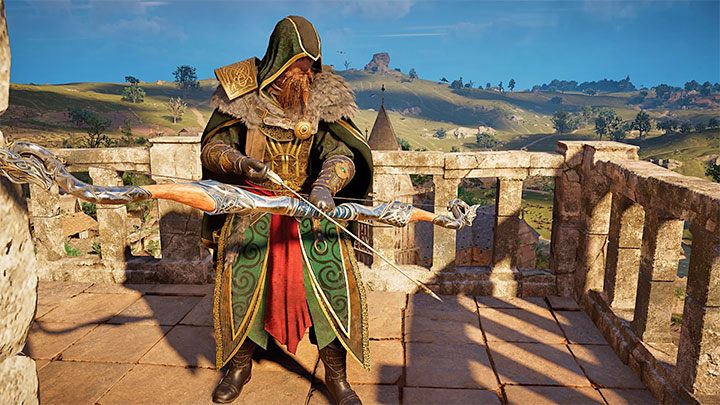 The following description provides advice on how to efficiently surprise and eliminate your opponents while in stealth. Unfortunately, in some situations direct combat is mandatory. This includes mainly boss fights, which you can't avoid in any way. Direct combat can also occur in other situations, e.g. if, as part of a quest, you have to defend the camp against enemy attack or take part in an assault on a castle. In this type of scenes you can rely on stealth attacks only in secondary role, for example by distancing yourself from the fighting characters and using the bow, or looking for an opportunity to back stab enemies busy fighting someone else.

Never go for 100% assassination build Eivor, because you may have problems in those situations where direct confrontation is required. Assassin gear, abilities and skills may prevail, but the build cannot rely solely on them. 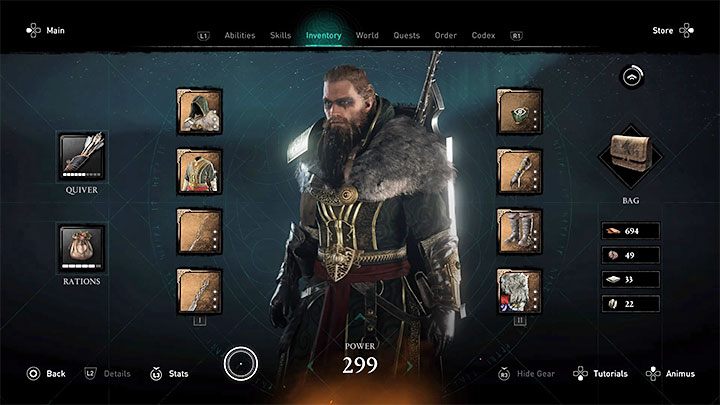 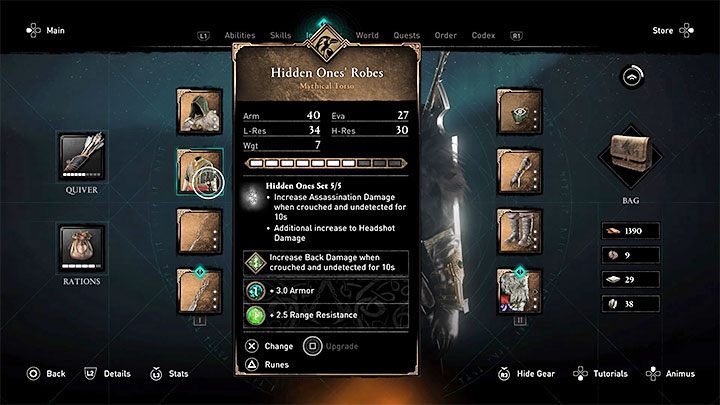 The best armor for assassin Eivor is the Hidden Ones' Set. Other elements of this armor are given as rewards for finding and exploring assassin hideouts. This topic is described in detail in the chapter on Assassin Bureaus. You will learn the locations and walkthroughs for all 6 bureaus.

Try to equip all 5 pieces of your assassin's outfit, thanks to which you will gain two bonuses to Eivor's stats:

You can get the complete assassin set even in the initial phase of the game, despite the fact that assassin bureaus are located in high-level regions. During the exploration of all Hidden One's bureaus you will not encounter any enemies. On the way to the bureau, simply avoid confrontation with patrols and wildlife. 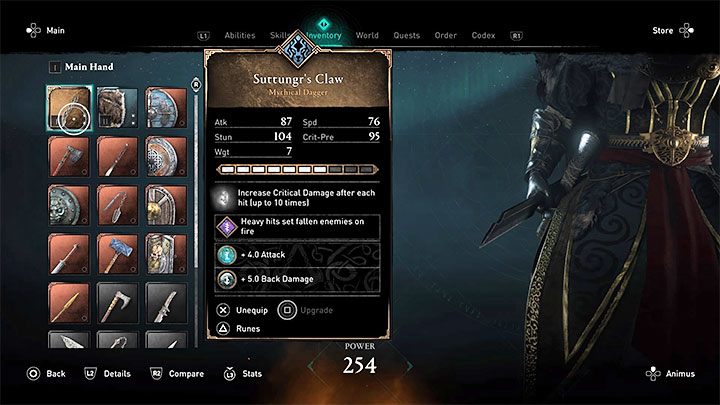 The dagger called Suttungr's Claw is the best choice for the main melee weapon, which is also a reward associated with the exploration of assassin hideouts. The unique feature of the dagger is that it inflicts increasingly more critical damage as more attacks are carried out. The ideal tactic to fight with the dagger is to rely on a series of very quick stabs. There is a good chance that you will be able to land quite a few of them before your opponent manages to defend himself and counter attack.

With the second weapon you have a lot of freedom. We recommend playing with a shield so that you can block your opponent's attack more efficiently if necessary. If you prefer to play more risky, you can alternatively bet on using two daggers. 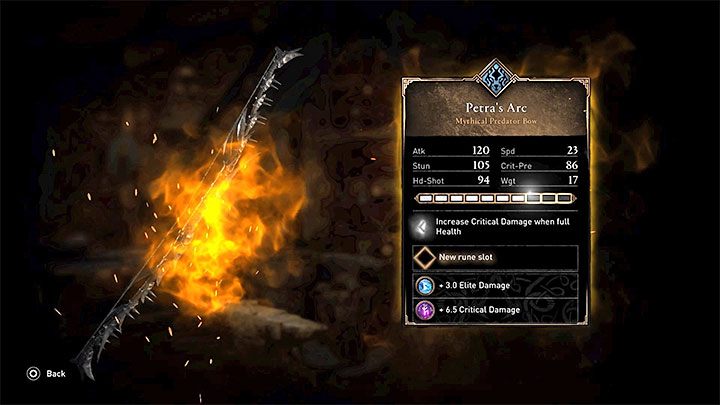 The ideal ranged weapon for stealth attacks is the predator bow. This type of bows has a low rate of firing, but when playing as an assassin and trying to eliminate single targets this will not be a problem. The most important thing is for a single bow attack to deal as much damage as possible (normal and if possible also critical). Developing the predator bow will enable you to eliminate more and more types of opponents with a single hit. Always try to aim at the head or, if the kill is not guaranteed, at a weak point on the enemy's body.

An important issue when using the predator bow is to constantly improve the quiver, and this is because by default Eivor can only carry a few arrows for this type of bow. Spending resources on quiver upgrades will reduce the risk of running out of arrows at a key moment in the game.

The picture shows a unique predator bow called Petra's Arc, an award for delivering trophies from defeated legendary animals to the hunters' shack in Ravensthorpe. It increases the chances of critical hits, but only if Eivor is at full health. You must remember to heal even small wounds. 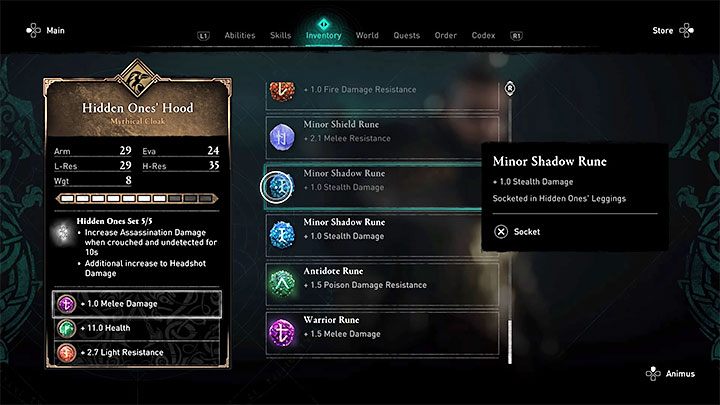 In the initial phase of the game you won't have much choice in terms of runes, but as the campaign proceeds, their stock in your inventory should increase quickly. You can also buy new runes in stores.

In the case of runes placed in the slots of various pieces of armor, we recommend with following bonuses: 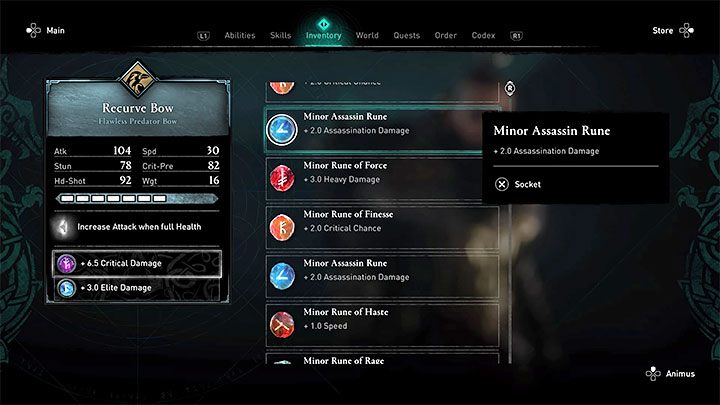 In case of runes placed in weapon slots (and possibly shields) we recommend the following bonuses: 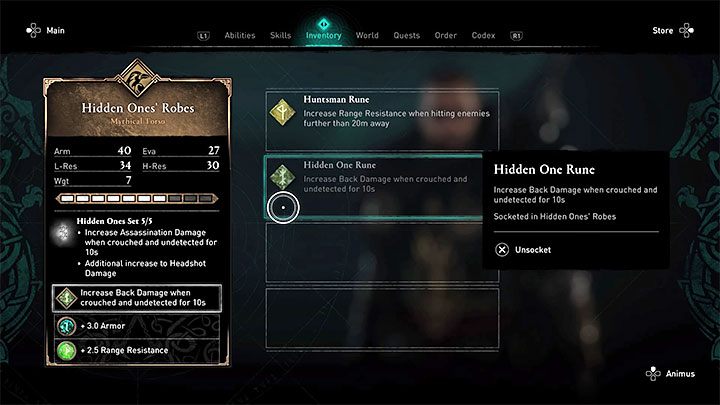 If you have been exploring Assassin / Hidden Offices bureous to complete the Hidden Ones' set, you should also have the Hidden Ones' rune. This rune will guarantee increased back-stab damage, but only when hidden and unnoticed for at least 10 seconds before the stealth attack. Unfortunately, you can only put it in the slot if you have upgraded one of the items to the highest, mythical quality. 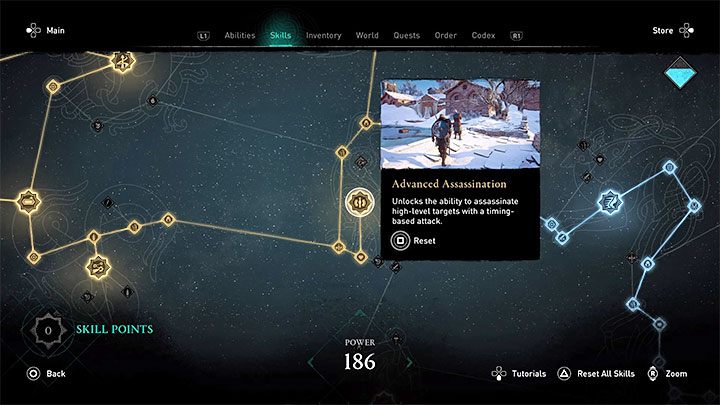 The two main skills for aassassin are:

Also, take an interest in the following skills:

You will find more information about the aforementioned skills listed on a separate page Best main skills - which ones? 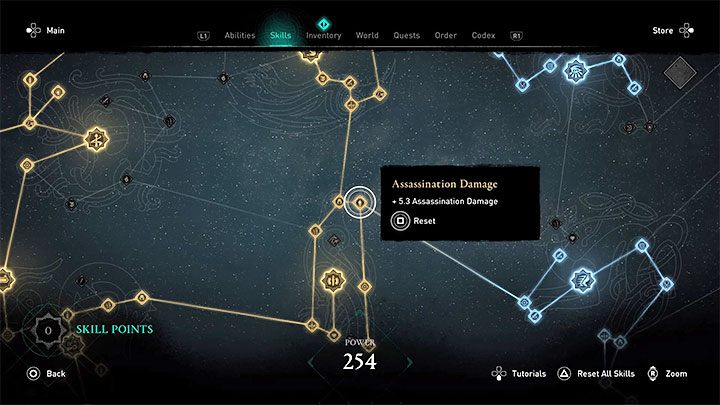 In addition to unlocking the main skills, you can also choose smaller stat bonuses, which will help you play as an efficient assassin. Useful stat bonuses: 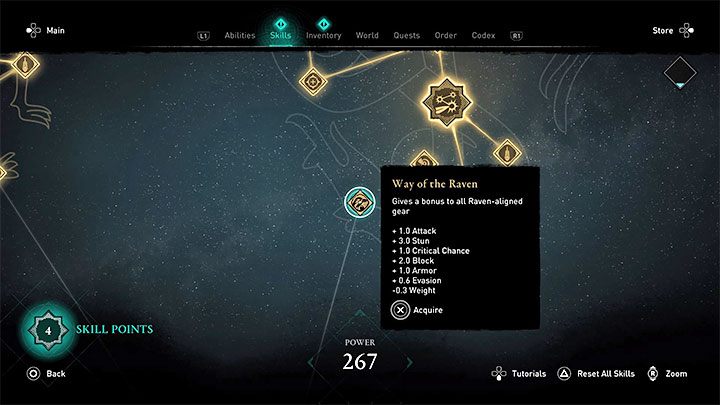 If, as suggested earlier, you have acquired the complete set of Hidden Ones / Assassin gear, then from the skill tree you should also choose bonuses for raven school gear (better attacks, blocks, stuns, dodges and critical damage, less weight and better armor). That's the school represented by the assassin set. 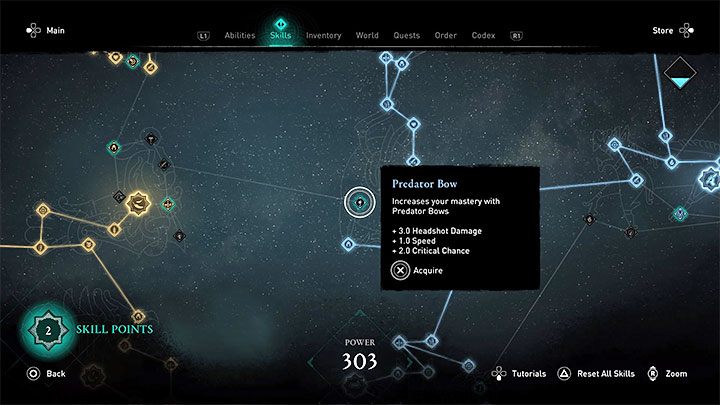 Similarly, if you have listened to our advice and started using the predator bow to deal very large amounts of damage to individual enemies, you can look for bonuses related to this particular bow variety on the tree. Selecting them will make the predator bow do more damage and improve its rate of fire and chance of critical hits. 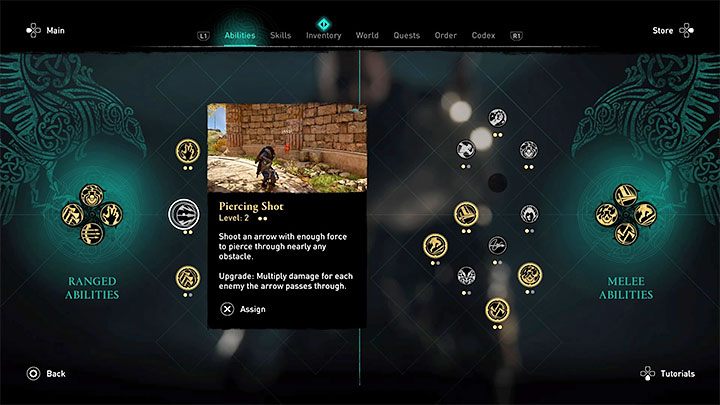 Same as with runes, you can't initially choose many abilities, because you will acquire them gradually. You have to start choosing better skills after you have unlocked more than 4 different ranged and melee abilities.

For an assassin, ranged abilities are more important. Useful abilities include: 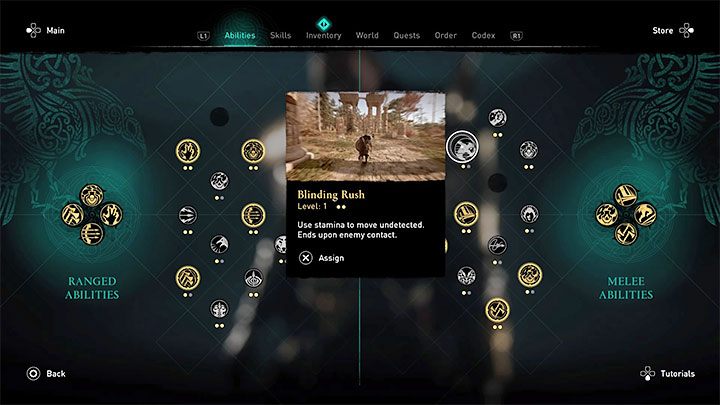 You should treat your melee abilities more as an emergency way out in case Eivor is detected, and as a help in situations where combat is mandatory. The abilities we recommend are:

You can learn more about abilities from the guide page Abilities - how to unlock?. The places where they are unlocked are also included in the chapter on secrets.