On this page of the Assassin's Creed Valhalla guide, you will find a detailed walkthrough for A Triumphant Return quest.

After a successful raid on Serpent's Landing, Oswald returns to Northwic with a treasure and a victory over the members of Rued's clan. He hopes that this act will be enough to win the favor of the brothers. 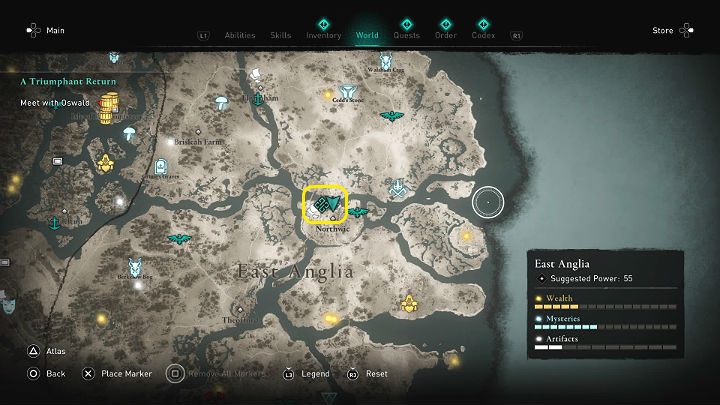 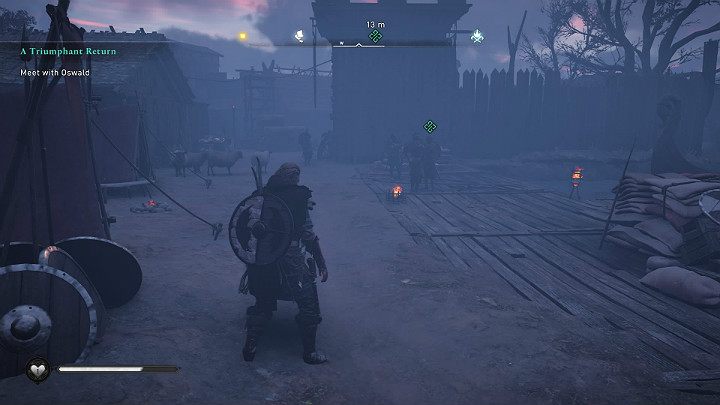 You will meet Oswald in the harbor. He will be accompanied by the brothers. The king will show the treasures robbed from Rued's clan. Broder is not satisfied, but under pressure from Eivor, he accepts the gift that Oswald brought him.

Find and defeat one of Rued's scouts

Brothir has spotted a scout from Rued's clan just outside the walls of Northwic. Eivor has to check if there are more spies around. 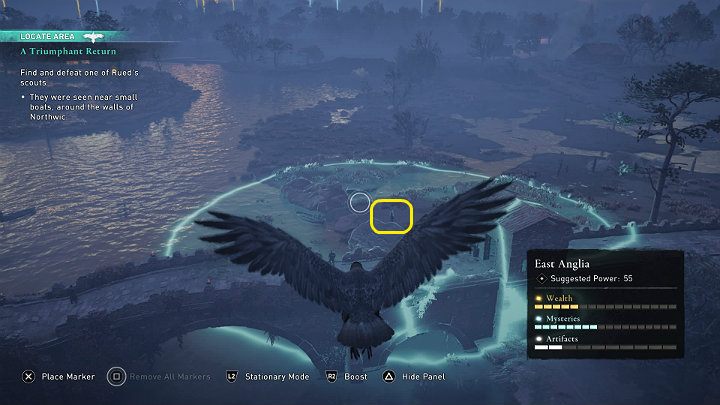 You will find a spy behind the city walls, on the left. Use the raven to find their position. 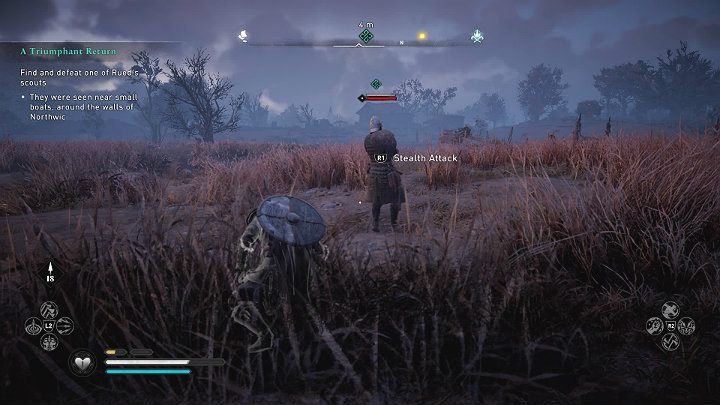 Get into the small boat in the harbor and reach the destination. Then, with one quick attack, knock the spy down, tie him up and take to Oswald. 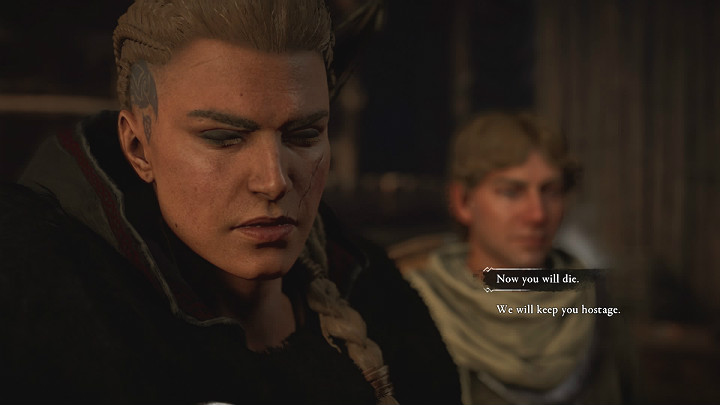 Return to the port and watch a cut-scene. Unfortunately, Oswald is not very good at interrogations – Eivor will have to do that. You will also be able to decide what happens to the captured spy.

Meet with your allies 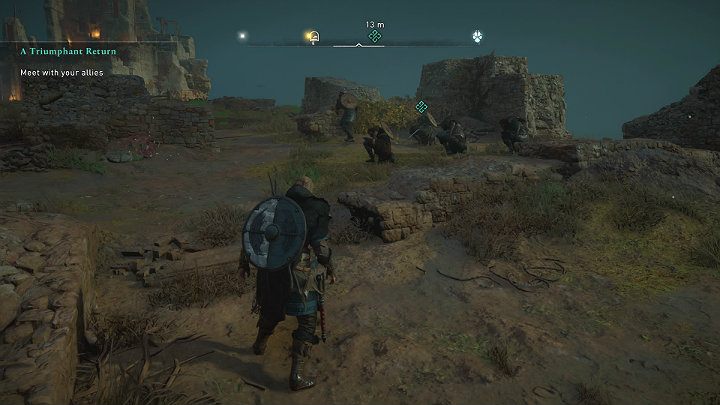 Oswald, together with his brothers, Finnr and Valdis, is waiting for you near Rued's clansmen main fortress, Dunwic. The allies discuss the plan and assign themselves the appropriate tasks.

Your next task will be to light a lighthouse outside the fortress walls. However, that place is guarded. 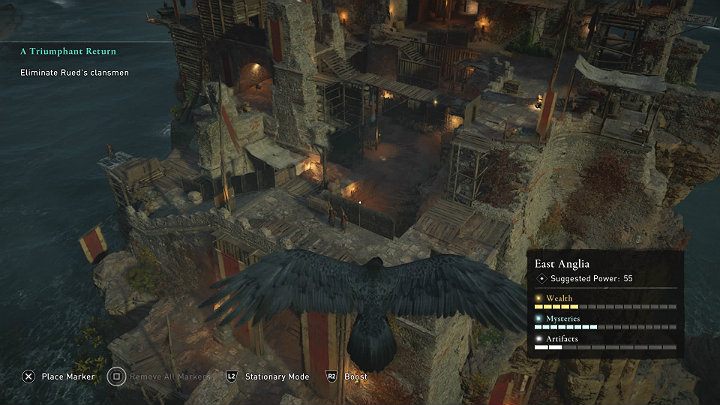 The fortress is very well guarded, but if you act methodically, you will be able to eliminate all guards quietly. If you want to, you can of course decide on starting a fight. 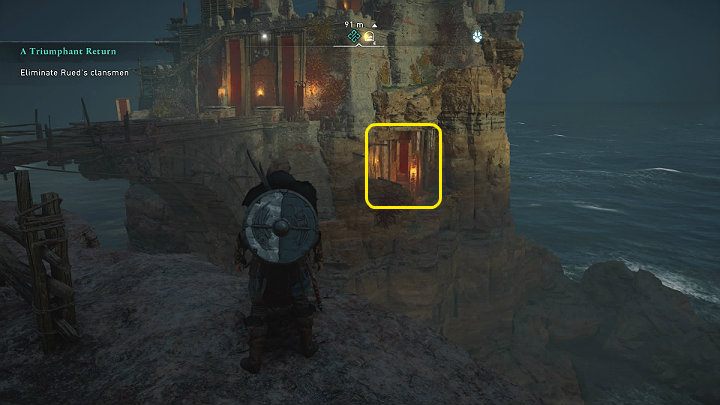 As for a stealth approach, you can get to the fortress using the side entrance. Just walk on the cliff to the place marked in the picture above. 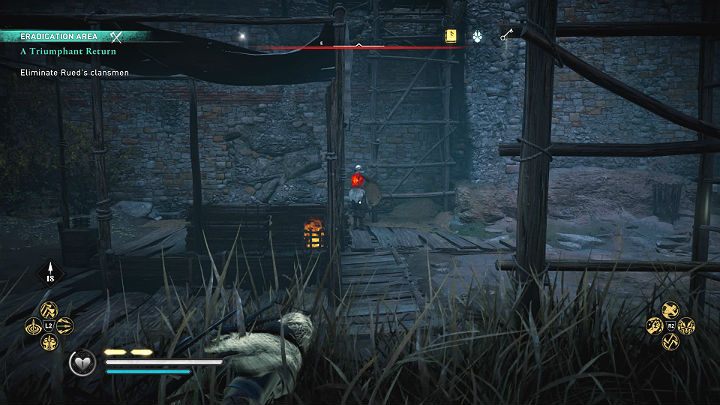 The entrance leads to the center of the fortress. Once you are there, you can start eliminating the guards. 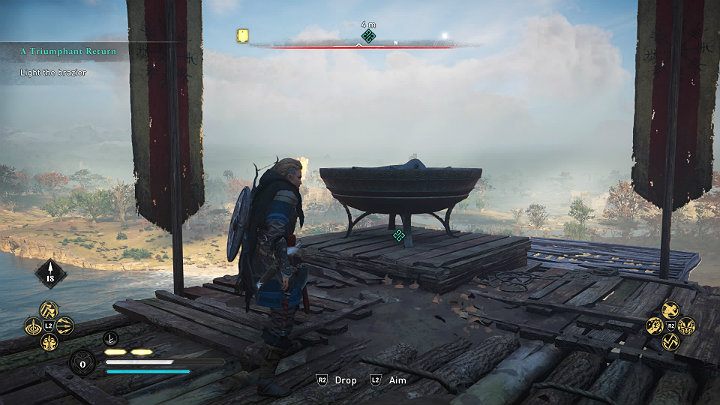 When all the guards are dead, light the lighthouse to lure the rest of Rued's people and their leader to Dunwic. Once they arrive, there will be a duel between Oswald and Rued.

Escape with your allies

The duel will end with a surprising result. Oswald and Rued will fall from the tower straight into the water. However, before you check what happened to the future king of East Anglia, you have to get out of Dunwic – defeat a few enemies along the way. 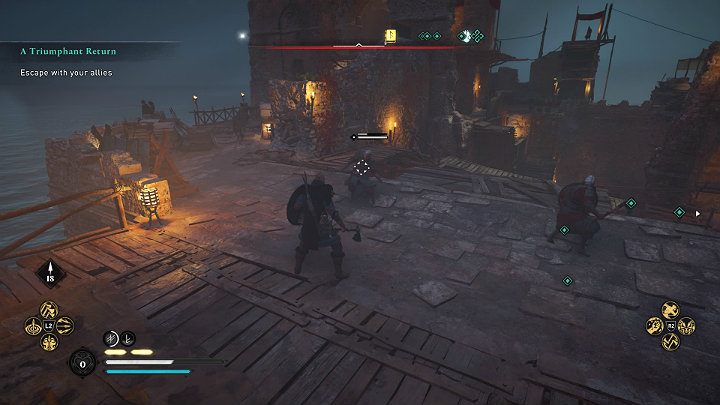 You don't have to fight all of Rued's soldiers if you don't want to. You can simply escape from the fortress – this will complete this stage of the task. 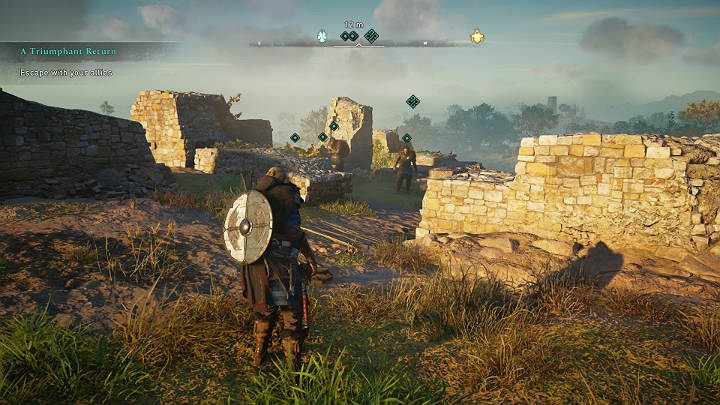 Reach the destination to join your companions and complete the quest. You will receive 5,100 XP.

If you are curious whether Oswald's body lies on the shore, the answer is no. At the bottom, you will only find Oswald's sword stuck in the sand.