This page of our guide for Assassin's Creed Valhalla contains information on how to identify and eliminate The Vice from the Order of the Ancients. This man is one of the five Maegesters of the Order. In addition to describing The Keel and how to defeat him, we provide the identity of the six order members serving under this Maegester.

Be sure to avoid murdering any of the order members from Jorvik during world exploration - specifically The Firebrand, The Needle and The Vault. Premature elimination of one of these people after meeting them in the streets of Jorvik can damage your save game data and you may lose a lot of progress. We recommend that you first complete the entire storyline in Jorvik and only then engage in optional exploration of the city. 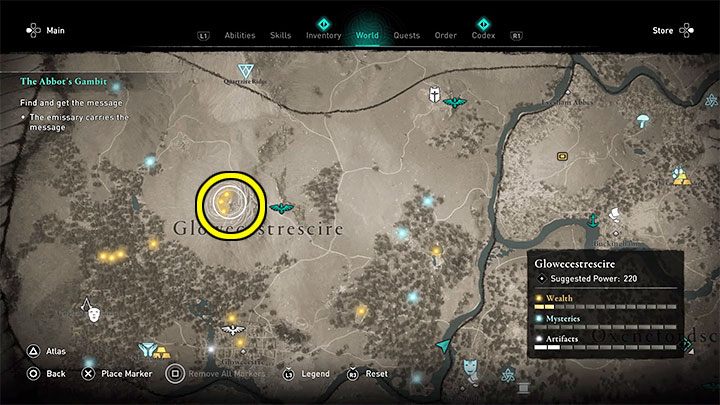 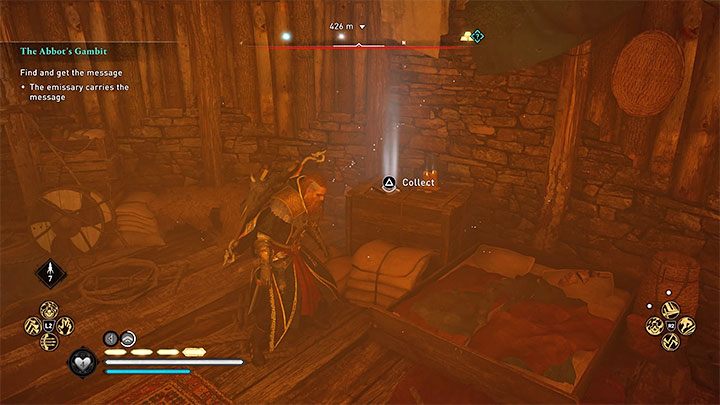 Clue 1/2 - Kill the member of the Order known as The Baldric. This is one of the people described on the page about Maegester 5 - The Keel.

Clue 2/2 - Visit the large Thieves' Warren camp located in the Glowecestrescire region, north of Glowecestre. The clue is located inside a barricaded building, which you can get to from the hole in the floor. 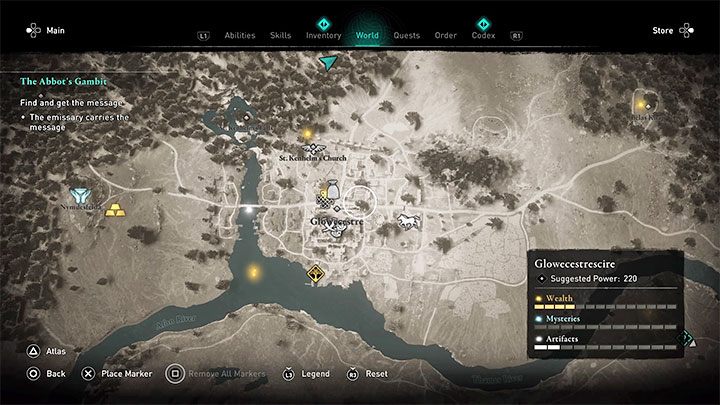 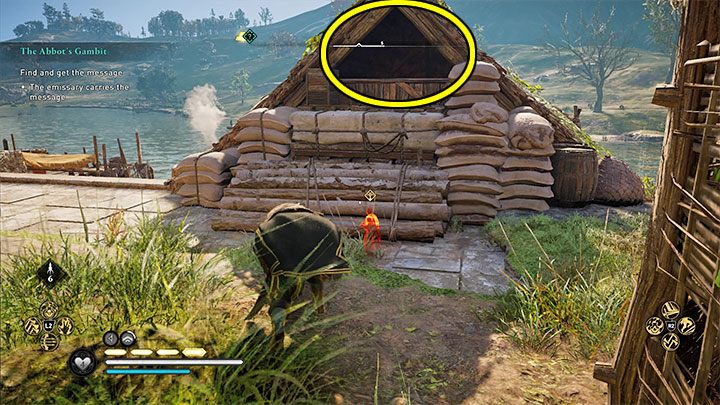 Eanbhert - The Vellum is in the city of Glowecestre. You can find him in one of the buildings in the docks, by the water. Get inside the building through the hole marked in the picture number 2. You can kill Eanbhert without the risk of alerting the area. 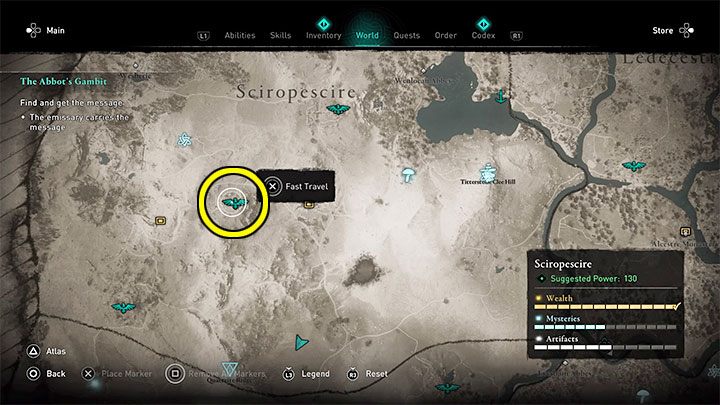 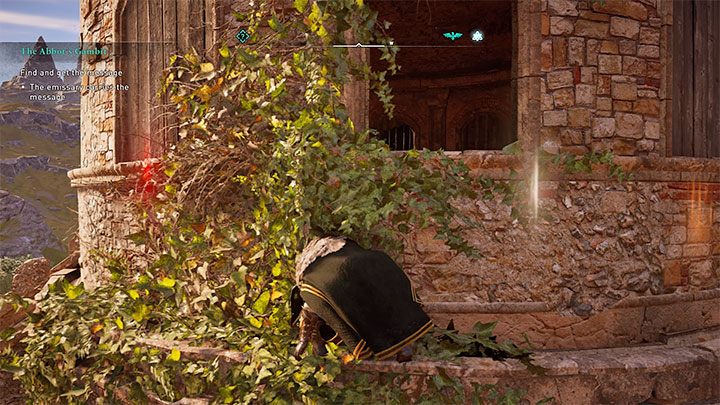 Clue 1/2 – Kill a member of the Order known as The Vellum. We described this person in the previous section.

Clue 2/2 - Use quick travel to move to the tower ruins in the Sciropescire region, marked in picture number 1. Don't jump off the roof of the tower, just start climbing down slowly. On the way you will pass the open shutter from picture 2. It will enable you to get into the room with the clue. 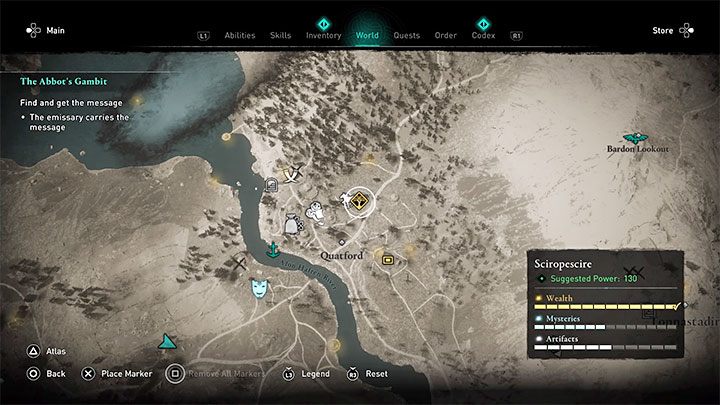 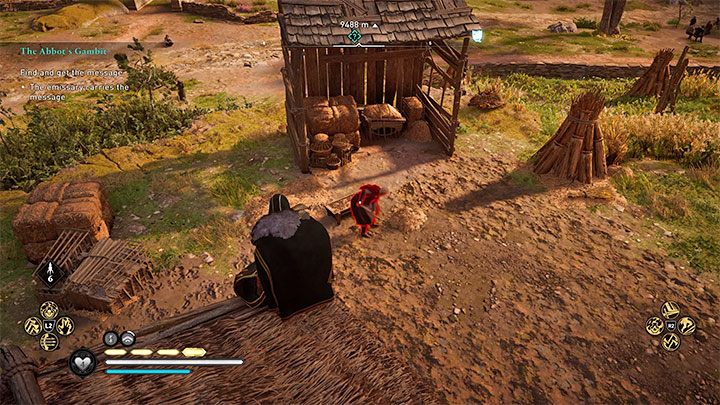 Tata, Defender of Otta's Wyrd - The Dart is in Quatford village in the Sciropescire region . When you get there, visit the stables where the person you are looking for works. You can easily kill Tata with the hidden blade. 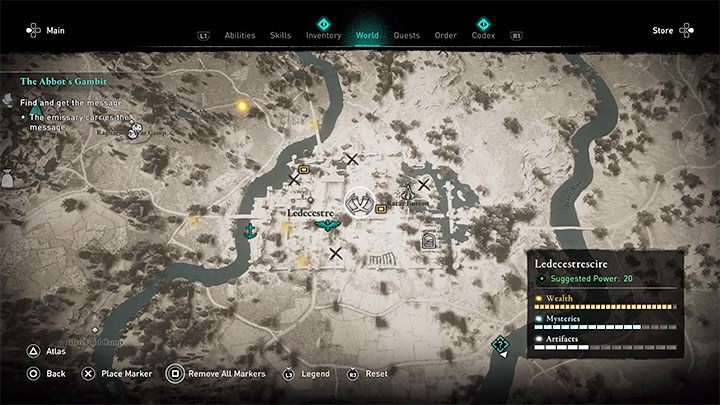 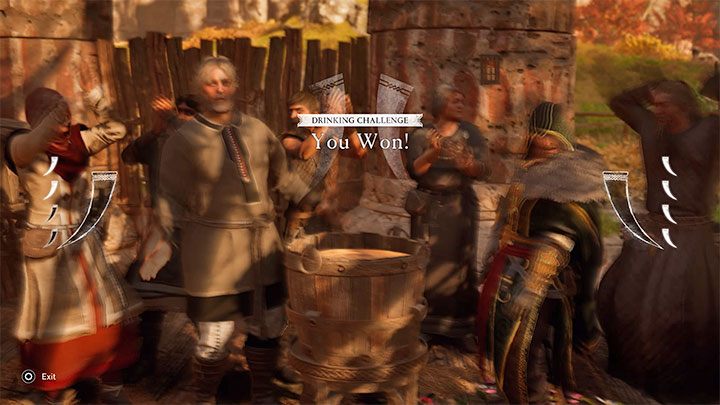 Clue 1/3 - Kill the zealot known as Cola. He travels near the borders of as many as four regions - Lincolnscire, Eurviscire, Snotinghamscire and Ledecestrescire (go to the page about zealots).

Clue 2/3 - Visit the village of Ledecestre in the Ledecestrescire region. Find the icon of horns - you have to win a drinking mini-game, which consists of rhythmic pressing of a button and swinging the knob left or right when necessary. If you are afraid of losing silver, choose the lowest bet (100 silver) or save your progress before starting the mini-game. 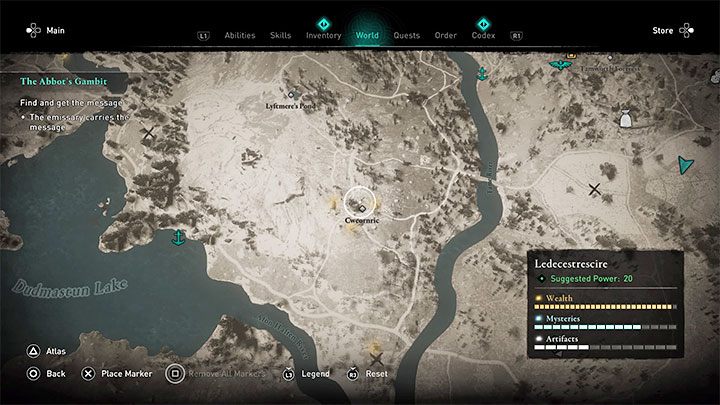 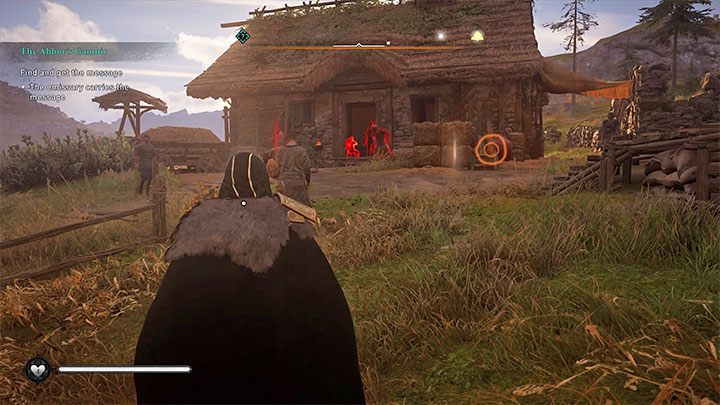 Clue 3/3 - Visit the village of Cweornic located in the western part of the Ledecestrescire region. The sought-after clue is inside the most tightly guarded building on the hill. 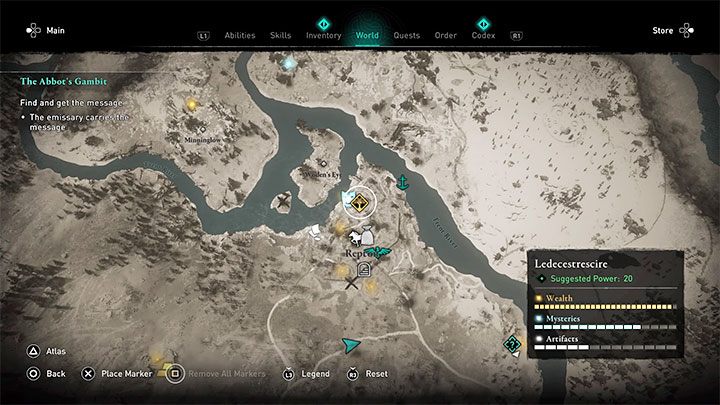 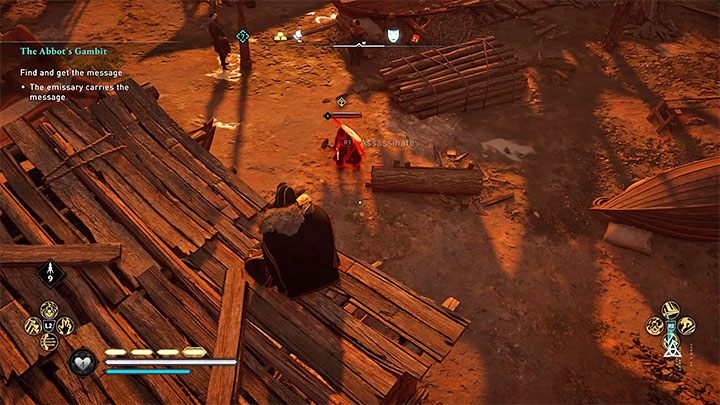 Gunilla - The Scotchpiper is staying in the village of Repton in Ledecestrescire region. You can find the woman working on the docks. It is very easy to kill her by jumping on her from the upper shelf and using the hidden blade. 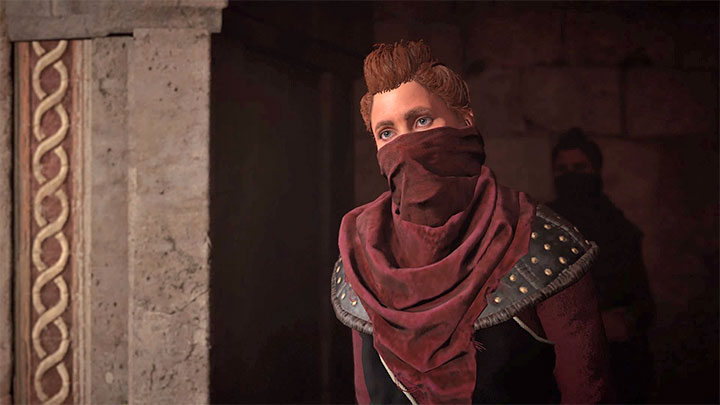 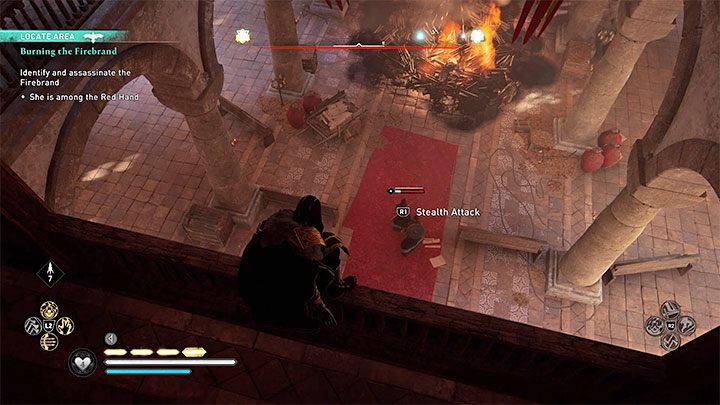 Abbess Ingeborg - The Firebrand is a member of the Order, which you will defeat during the campaign, specifically while completing story line associated with the city of Jorvik . Eivor will manage to identify and eliminate The Firebrand as part of the main quest called Burning the Firebrand.

Right after Ingeborg is exposed, she can be killed. Inside the building there are three women and The Firebrand is the one who does not have a yellow mark and a question mark in the name. If you have the skill called Advanced Assassination, you can drop on Ingeborg and kill her right away. Otherwise, you will face a direct fight with Ingeborg and her subordinates. 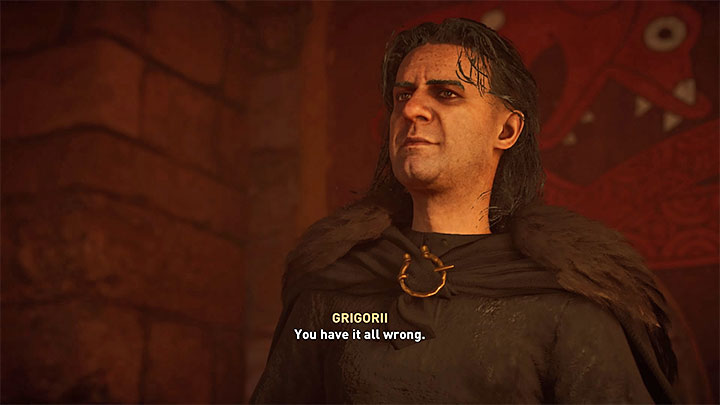 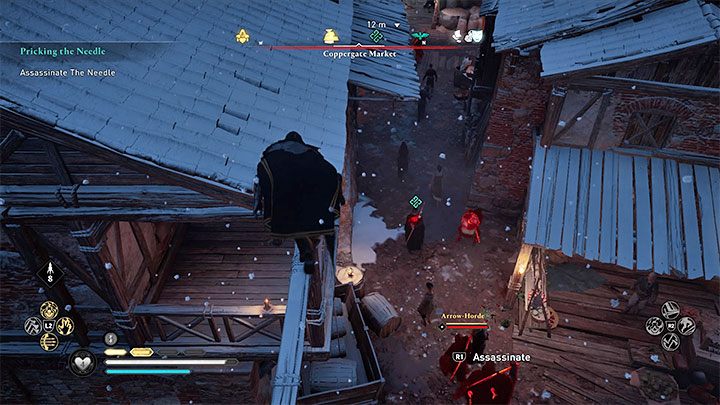 Grigorii - The Needle is a member of the Order that you will defeat while completing the campaign, namely while going through the storyline associated with the city of Jorvik . Eivor manages to identify and eliminate the Needle in the main quest called Pricking the Needle.

You will be able to get The Needle after getting out of the sewers. Grigorii is at the marketplace and it is best to attack him from one of the roofs - use a bow or drop down on him to use the hidden blade. Expect a fight with his bodyguards and other guards from the area. 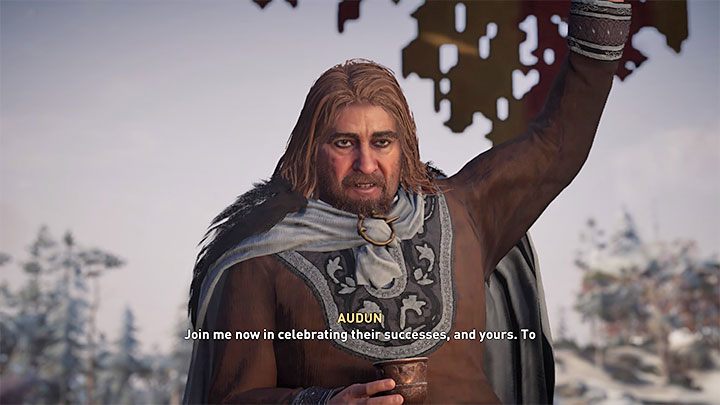 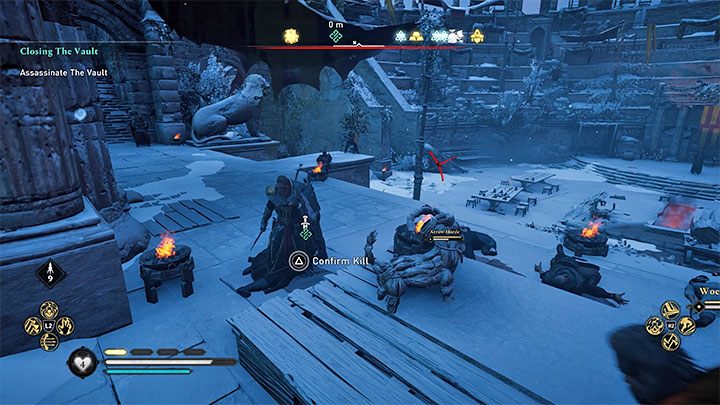 Audun - The Vault is a member of the Order, whom you will defeat during the main campaign, namely while completing the storyline associated with the city of Jorvik. Eivor will be able to identify and eliminate The Vault in the main quest called Closing the Vault.

The confrontation with Audun will take place regardless of whether or not you correctly select him from the people present at the party. After poisoning the guests, the man will try to escape. Ignore the fights in the theater and go after him. You can kill him with a bow or jump him and use the blade.

Do not kill The Vault if you encounter him at the theater when exploring Jorvik. His premature death may damage your save game data. Audun must only be killed after completing the related quest. 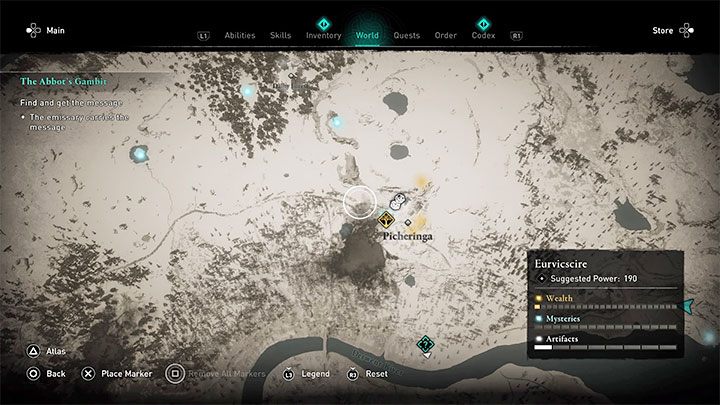 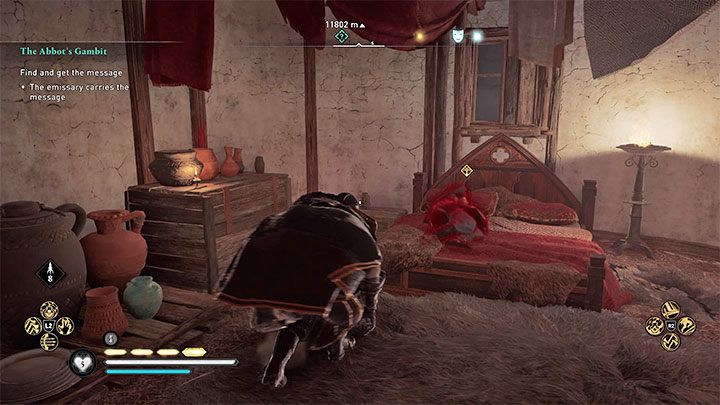 Maegester - The Vice is Reeve Derby. His identity is automatically discovered after you identify and assassinate the other 6 members of the Order described above.

Reeve Derby is staying in Picheringa village in Eurvicscire region. It is best to reach this location at night. There is then a good chance that the reeve will sleep in his own house. You can kill him in his sleep.