This page of the Assassin's Creed Valhalla guide contains information on how to identify and eliminate The Rake, a member of the Order of the Ancients. This woman is one of the 5 Maegesters of the Order. In addition to describing who The Rake is and how to defeat her, we reveal 6 members of the Order working under this Maegester.

The page discussing the Order of the Ancients is in preparation. We will add more descriptions in the near future. 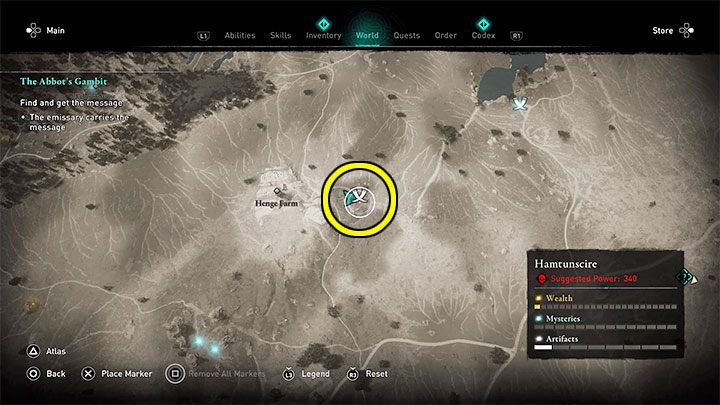 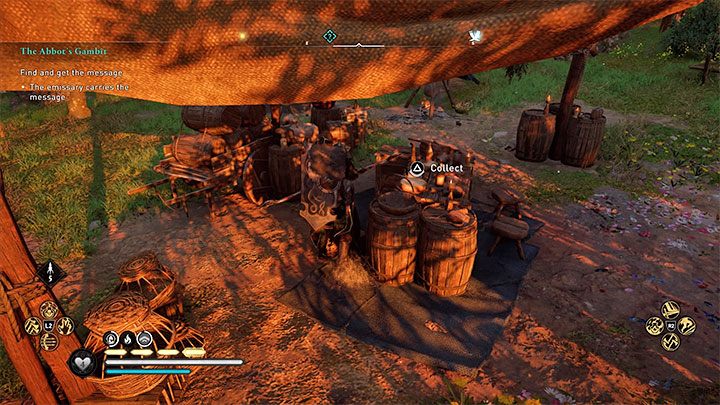 Clue 1/3 - Kill a zealot named Hrothgar. He travels through the Suthsexe region (go to the page about the zealots). Alternatively, you can kill a member of the Order called The Sickle- we described her in the next subsection.

Clue 2/3 - Visit the Henge Farm location in the Hamtunscire region. You will find this clue near the place where you can have a drinking battle mini-game. 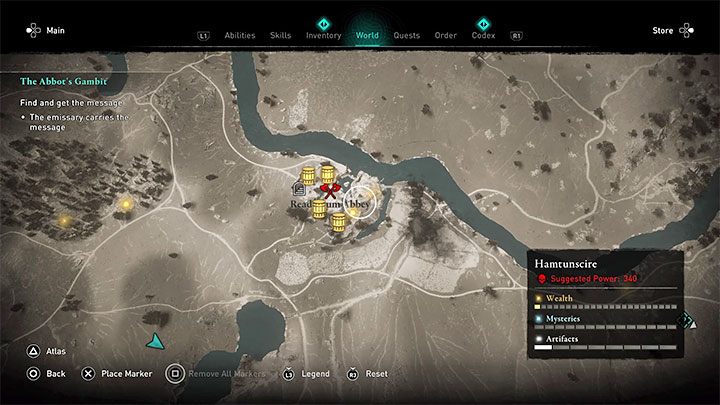 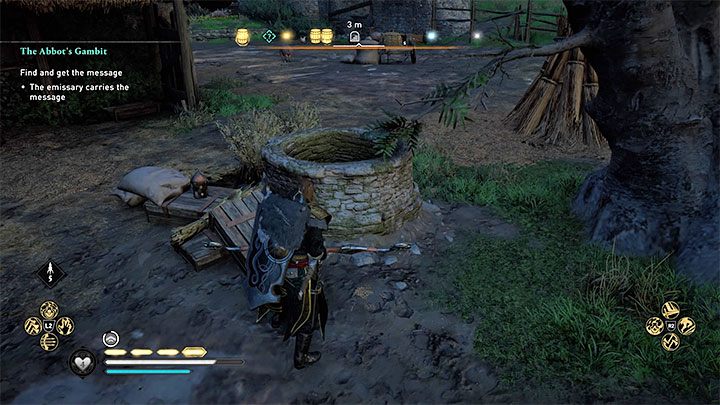 Clue 3/3 - Visit the Readingum Abbey in the northern part of the Hamtunscire region. You must find the well, destroy its cover and go underground. 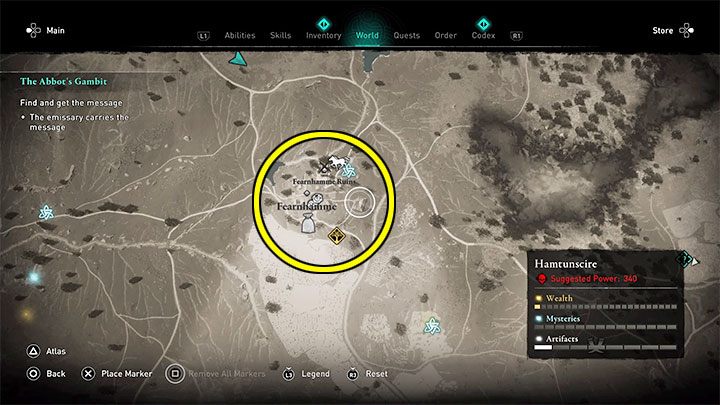 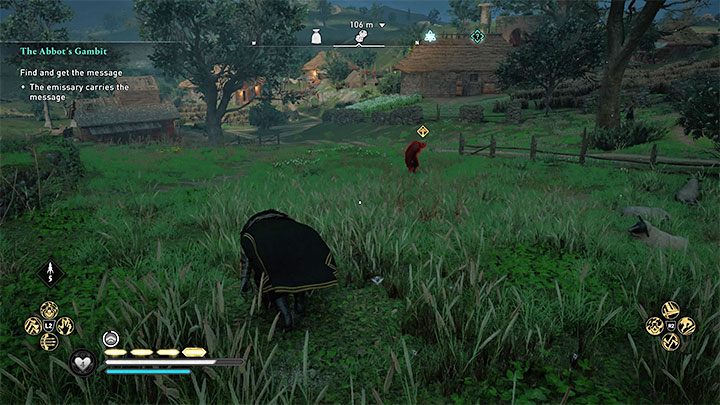 Yohanes Loukas - The Oil is located in the Fearnhamme village at the eastern end of the Hamtunscire region. You do not have to eliminate all enemies in the village. You only have to kill Yohanes. The best way to do that is when he is away from other people. 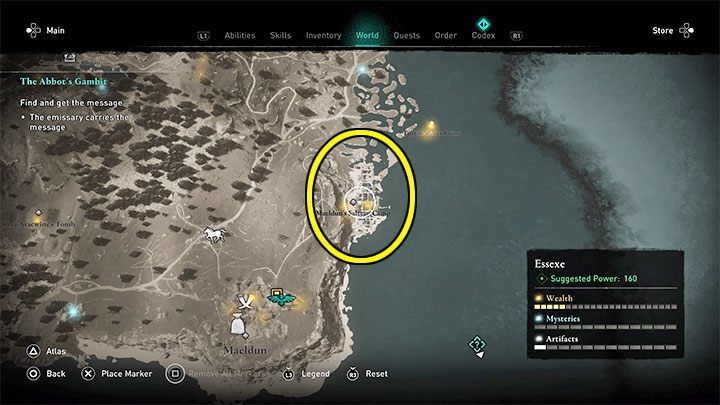 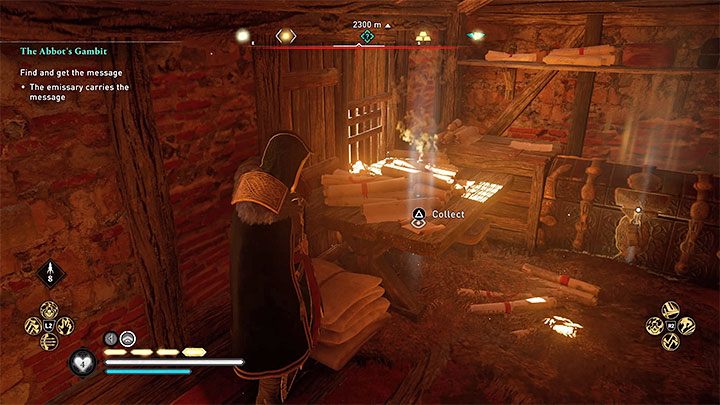 Clue 1/2 - Kill the zealot named Woden. He travels in the Cent region ( go to the page about the zealots).

Clue 2/2 - Visit Maeldurn's Salter Camp at the eastern end of the Essexe region. The clue is inside a barricaded house with a loot chest. 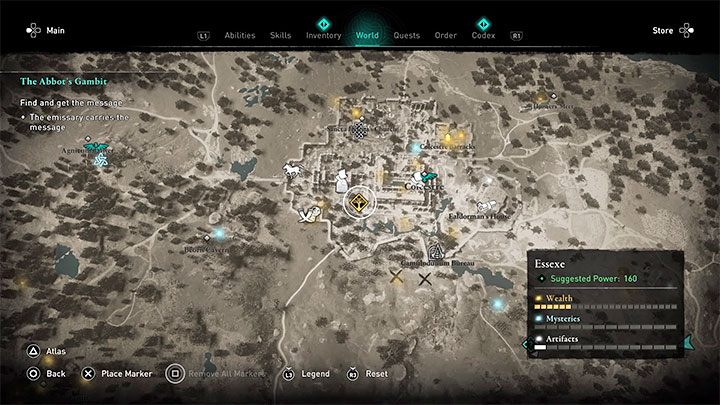 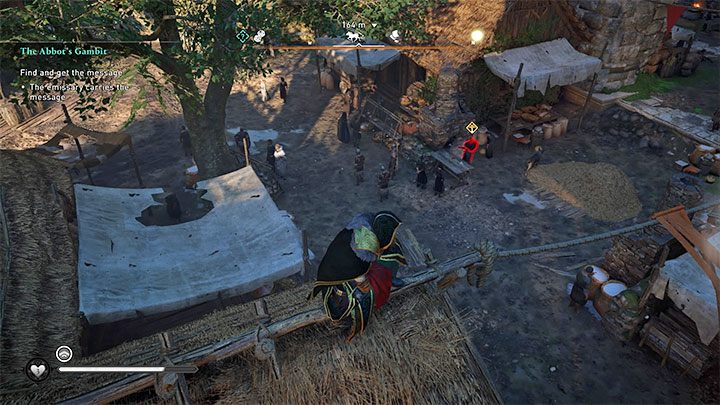 Heika of Friesland - The Sickleis located in the town of Colcestre in the Essexe region. She is near the bakery in a public area. The best way to kill her is by using a bow. However, her death will certainly alert the area. Wait until the people calm down or eliminate the guards alerted by the assassination. 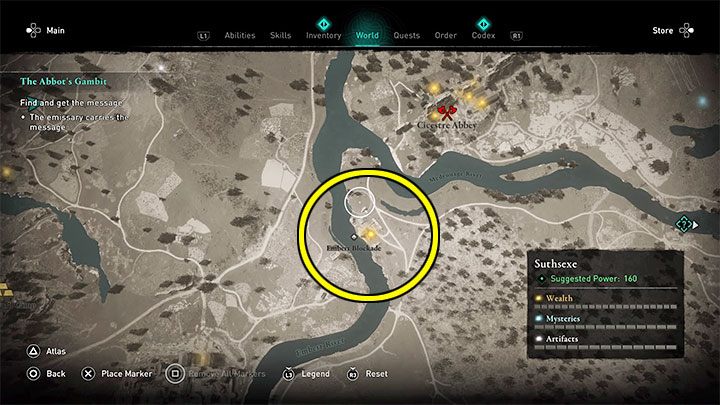 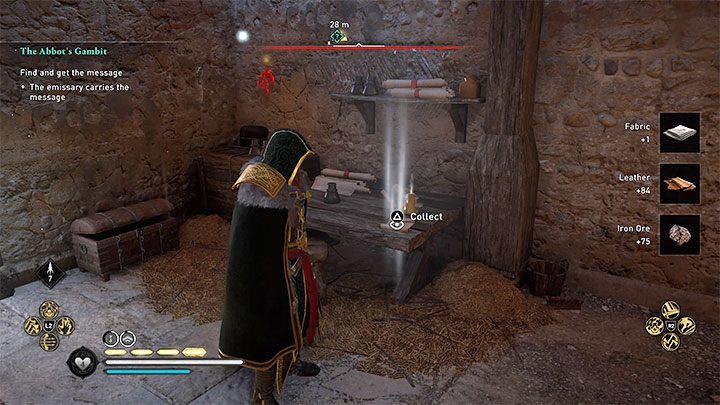 Clue 1/2 - Kill the zealot named Bercthun. He travels in the Hamtunscire region (go to the page about the zealots). Alternatively, kill a member of the Order called The Anvil. This is one of the people described on the page about Maegester 2 - The Lyre.

Clue 2/2 - Visit Embert Blockade located south of Cicestre Abbey in Suthsexe region. The clue is inside the barricaded house. 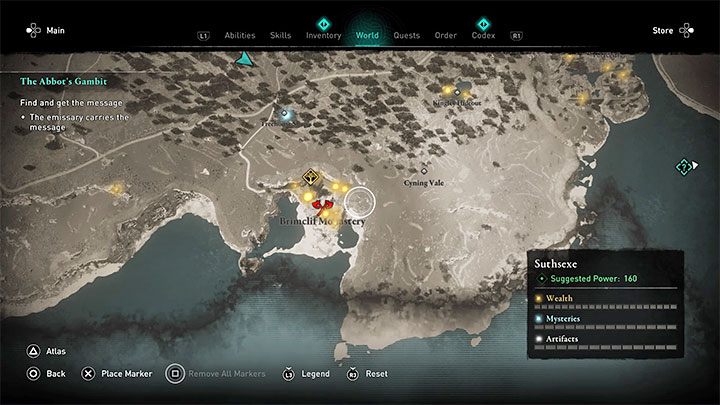 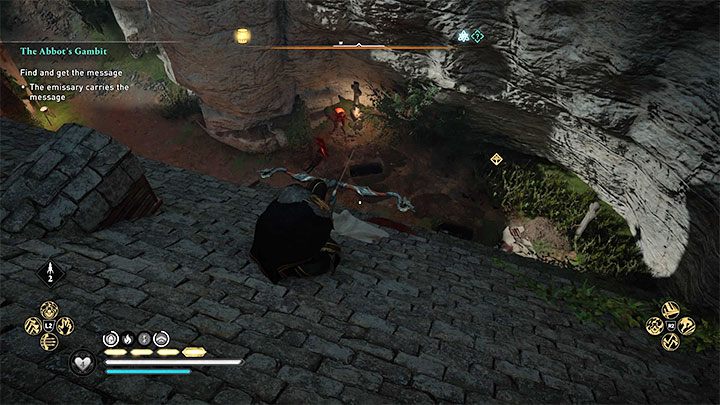 Beneseck of Bath - The Bell is in the Brimclif Monastery located at the southern end of the Suthsexe region. This member of the Order should be accompanied by a few other enemies. If you engage them in combat, Beneseck may start escaping. The best way to eliminate this member is to use a bow. After that, you can deal with the rest of the enemies. 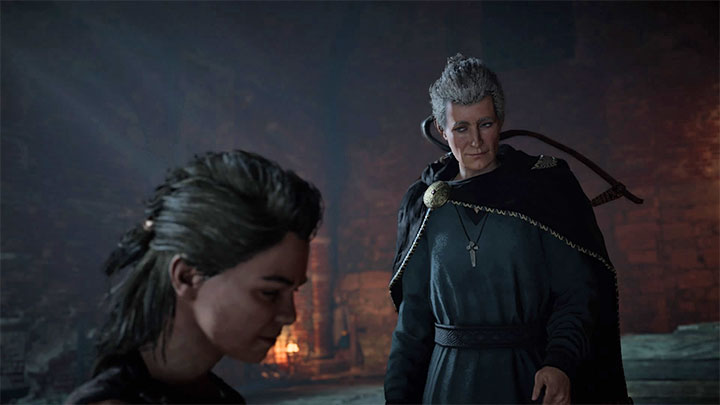 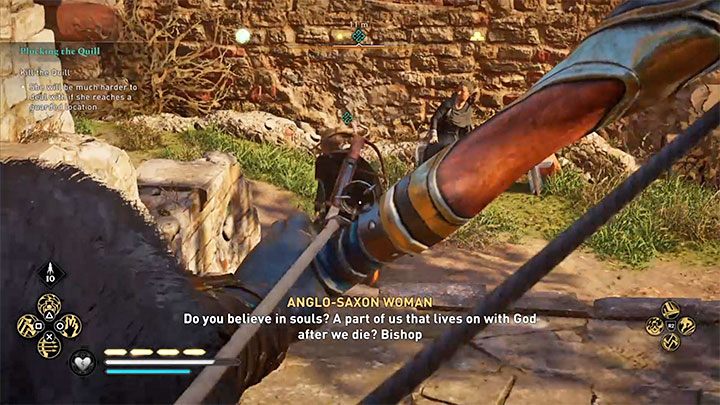 Hilda - The Quill is assassinated during the campaign, namely during the storyline related to the Wincestre region. The assassination takes place during Plucking the Quill main quest. You fight Hilda in the sewers. Watch the cut-scene. You don't have to start fighting with people sent by Hilda. You can immediately climb the top shelf and start chasing the woman. Try to prevent Hilda from reaching another guarded location - shoot her legs with a bow so she can fall over. This will make it very easy for you to kill her. 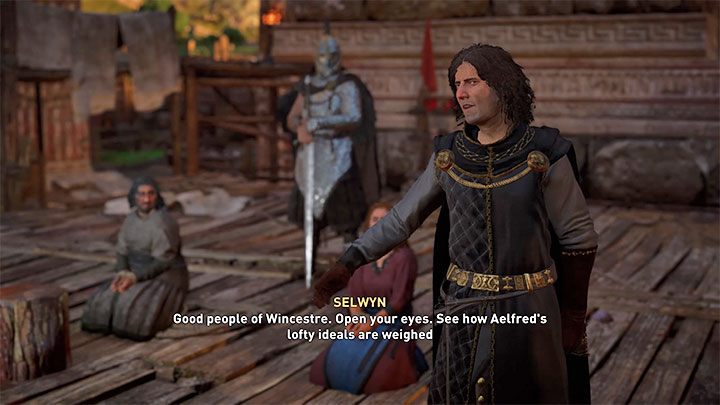 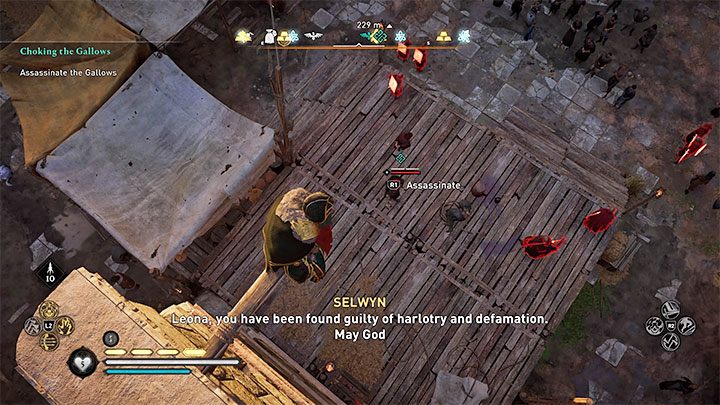 Selwyn - The Gallows is a member of the Order that you will kill during the campaign, namely the storyline of the Wincestre region. The assassination takes place during Choking the Gallows main quest. You can assassinate Selwyn during the execution in the town square. Sneak up on the podium from behind and kill Selvyn by performing an air assassination. 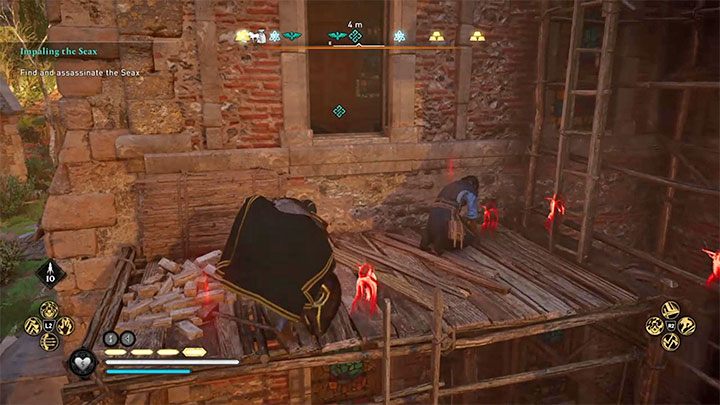 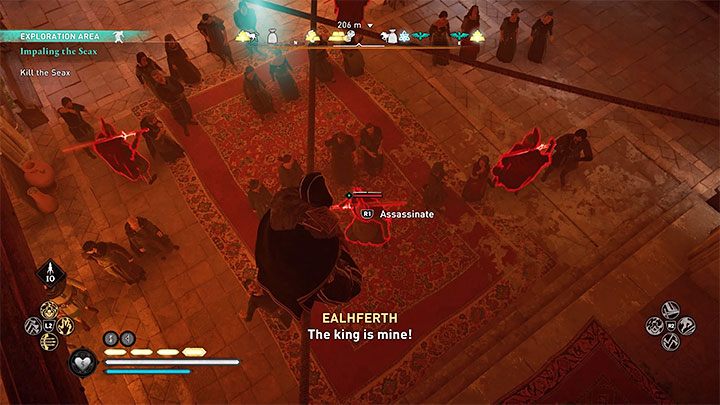 Ealhferth - The Seax is a member of the Order that you will kill during the campaign, namely the storyline of the Wincestre region. The assassination takes place during Impaling the Seax main quest. Sneak into the Witan Hall building through a destroyed stained-glass window adjacent to the scaffold on the right. You will be right above the room. Wait until Ealhferth tries to murder the king. Use this moment to jump on him and kill with the hidden blade. 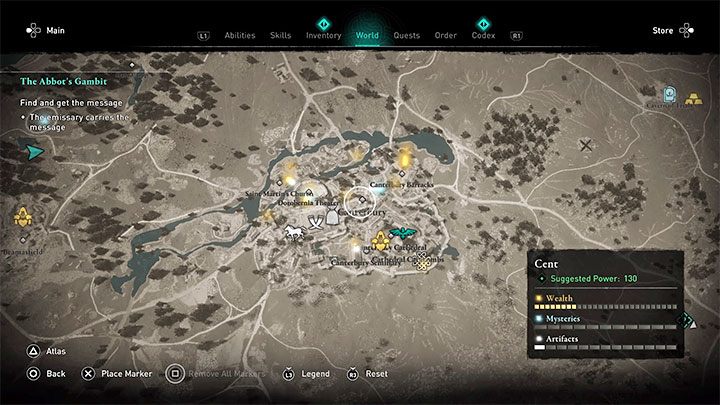 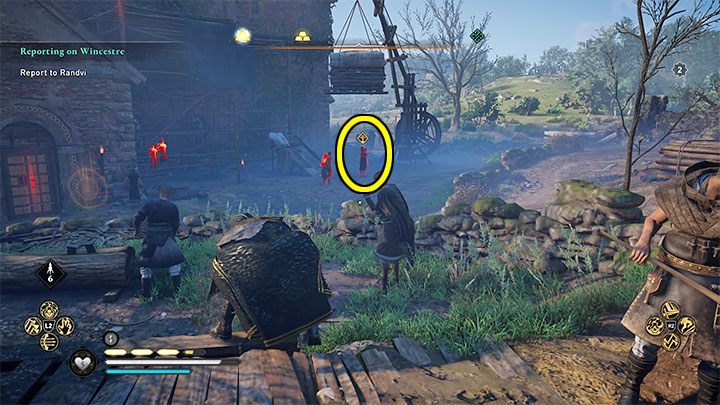 The Rake is Sister Blaeswith. Her identity is discovered automatically after identifying and killing 6 other members of the Order.

Sister Blaeswith is on the outskirts of Canterbury in the Cent region – you can find her in the north-west corner of the city. The woman should be standing next to the church – notice that there is a cargo hanging above her. Take out your bow and aim the cargo's hook to drop it. Get rid of the remaining enemies in the area or wait until they disperse to reach the corpse and confirm the assassination.