On this page of Assassin's Creed Valhalla guide, you will find all the information about Vinland. You will learn, among other things, how to get to Vinland, what Vinland really is, what unique attractions and awards await Eivor in this region of the world, and whether you can freely return to Vinland.

How to get to Vinland? 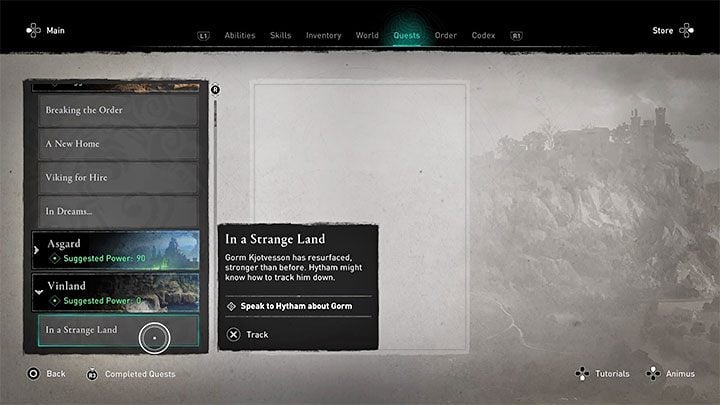 Vinland is a completely separate land, which you can't initially visit. You will not find it in the atlas used to select the lands.

To unlock access to Vinland you simply need to reach a certain point in the plot. Specifically, you need to complete the Lunden storyline, the one where you help Stowe and Erke and eliminate several members of the Ancient Order. When you return to Randvi in Ravensthorpe, you will unlock In a Strange Land quest and find out that Hytham from the Hidden Office would like to talk to you. In your conversation with Hytham, you will find that Gorm, son of Kjotve the Cruel and one of the Ancient Order's Masters, has just escaped to Vinland. 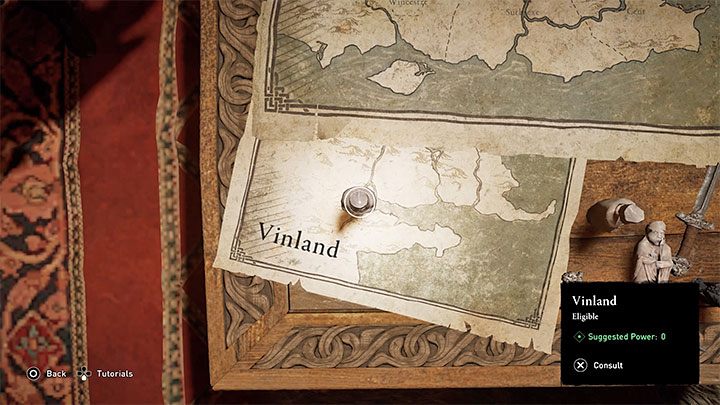 Return to Randvi. Vinland will appear on the Alliance Map - you will find it at the very bottom. You can select it as another saga / quest line.

It is worth noting at this point that Vinland does not have the recommended region power, i.e. you can visit it at any stage of the game. Wait with going to Vinland until you've upgraded rations by a few levels, in order to have more of them when you reach the location. 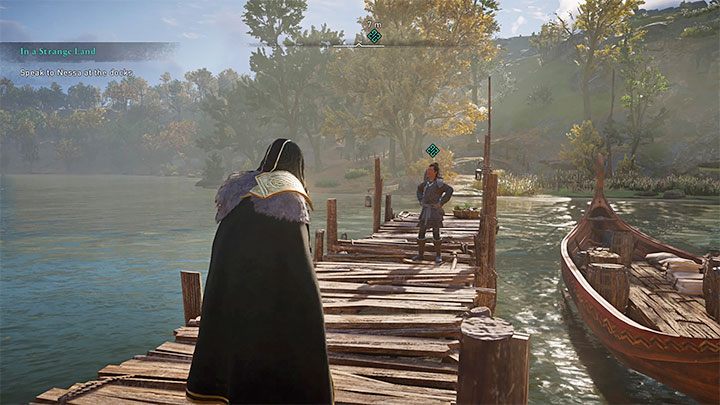 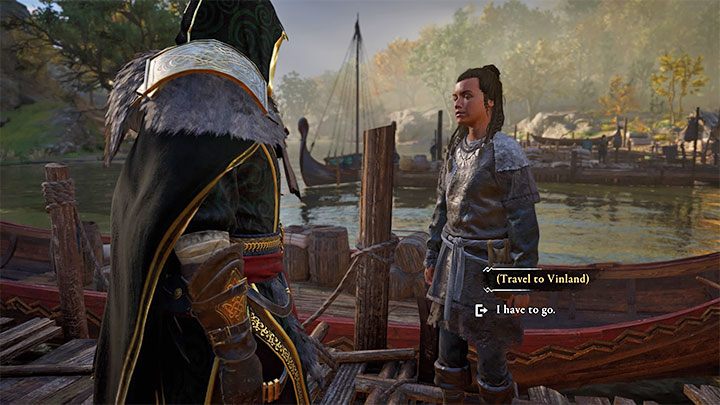 In order to go to Vinland, you must meet Nessa at the docks of Ravensthorpe and confirm your will to go on a few weeks' journey.

A trip to Vinland is not a journey without a quick return. Even if you want to return to England prematurely after reaching Vinland, the game will allow you to do so. All subsequent travels between England and Vinland will be free.

Vinland - what is it? 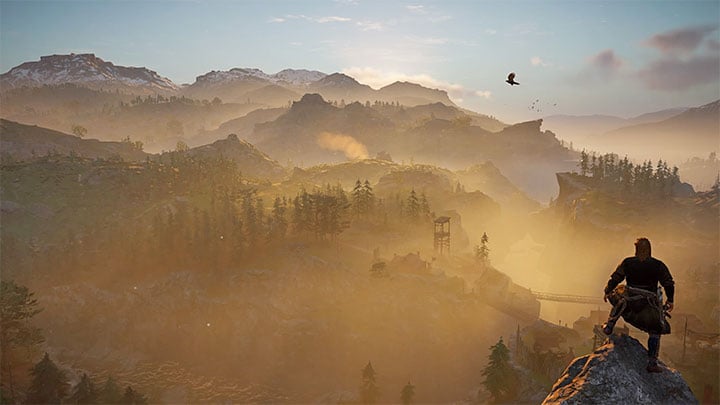 The name Vinland sounds very mysterious, but it is really about the North America from the time of the Viking conquests. 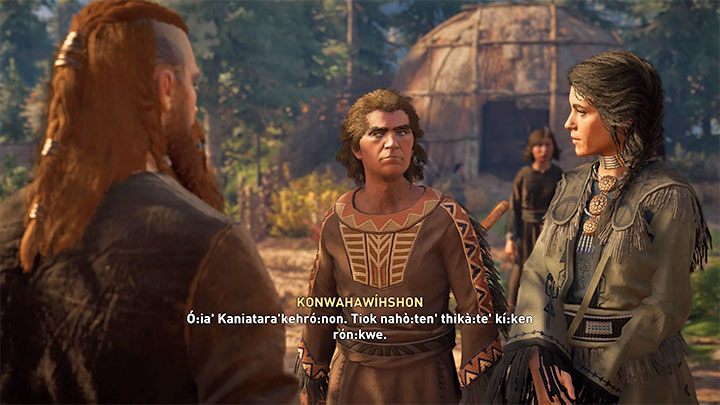 Eivor, upon arrival in Vinland, will meet friendly Iroquois. Despite the language barrier, the Indians will offer support in the form of equipment to survive in an unknown environment. 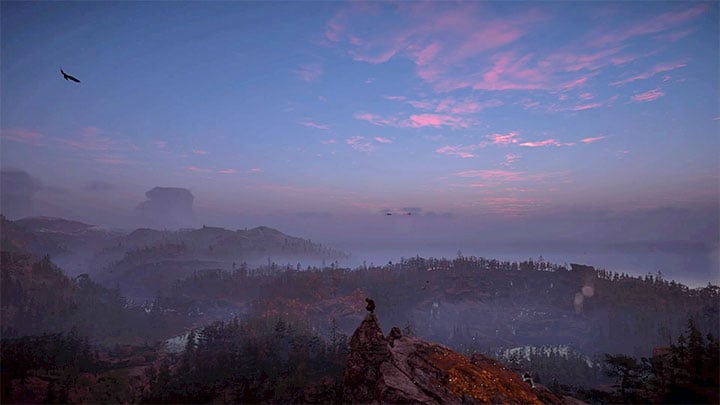 Although Vinland / North America is a huge continent, the land of Vinland in the game is not very extensive. Eivor is given a small area to explore, which at best will last for a few hours of very careful exploration. 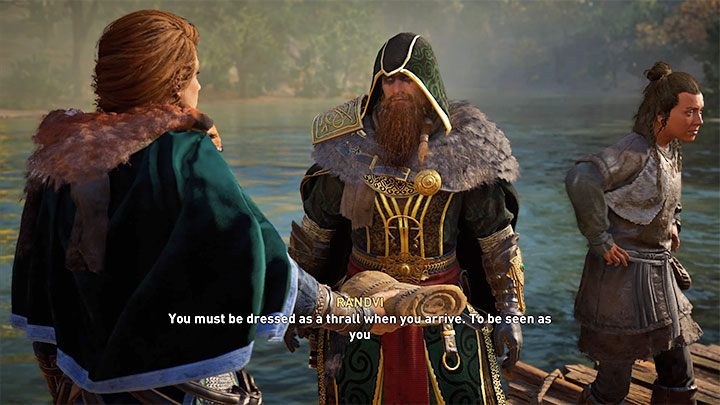 Eivor cannot take with him the equipment used to explore the main game lands, namely England and Norway. This is explained by the need to dress up as a slave (Thrall) in order to make it easier to catch Gorm, who is the main target of the expedition to Vinland. Eivor's equipment will of course be waiting for him when he returns to England. You won't lose it. 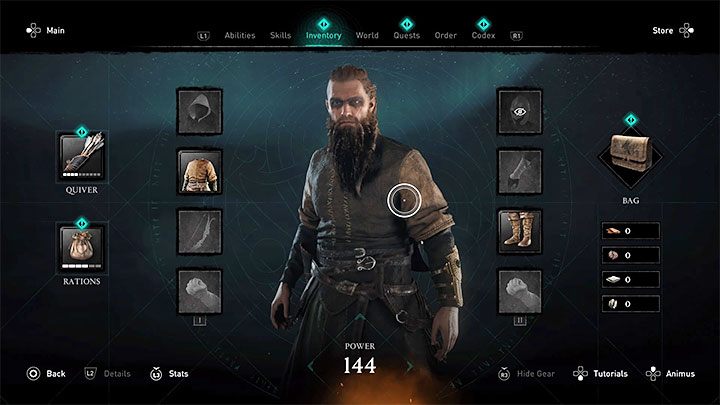 You will start your visit to Vinland with an almost empty inventory. You have to do without: 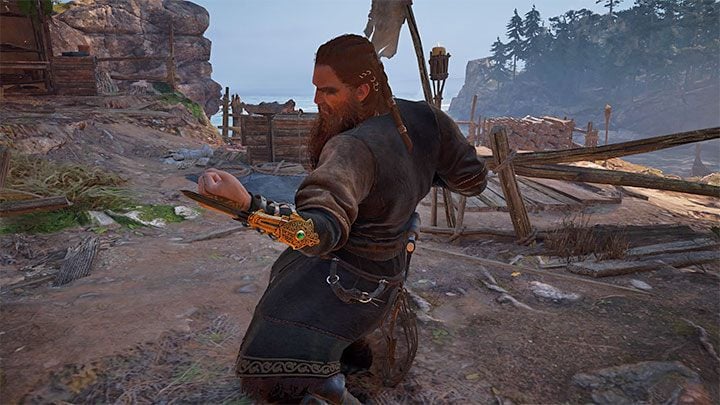 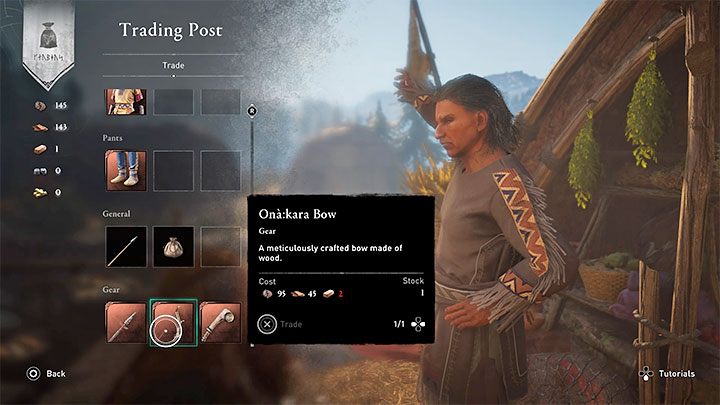 In Vinland you can get new equipment. The game does not force this step, but the more new equipment you get, the easier it will be to deal with armed opponents from enemy camps and Gorm himself.

New items of equipment must be purchased from vendors. You will find several of them on the map - they all offer the same things. Priority purchases are melee weapons (there are two different ones to choose from) and a bow, so you can start effectively attacking enemies and wild animals in close and distance fights. 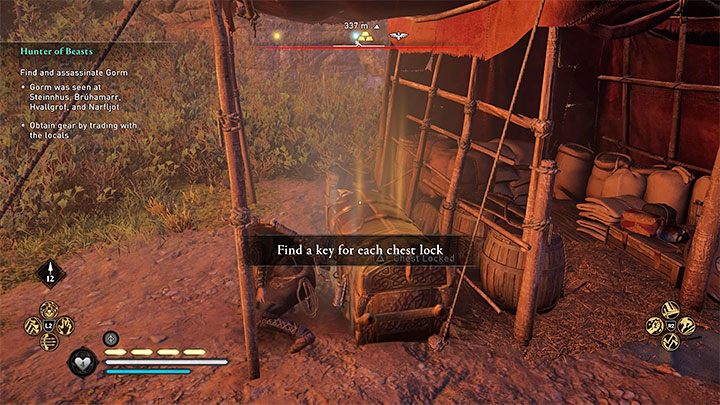 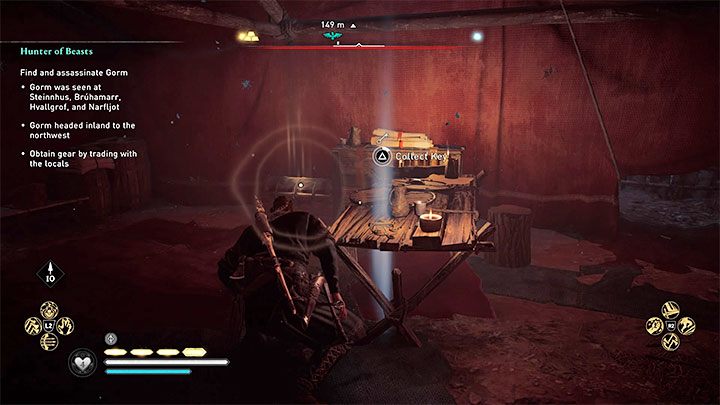 Items exhibited by merchants have to be paid for with crafting materials Common materials can be found in small crates and in the corpses of killed animals.

Ingots are more problematic. Chests with ingots can be found in hostile camps. They are always locked and you must first kill the opponent who has the key to the chest. The good news is that you will find 2 ingots in each box. 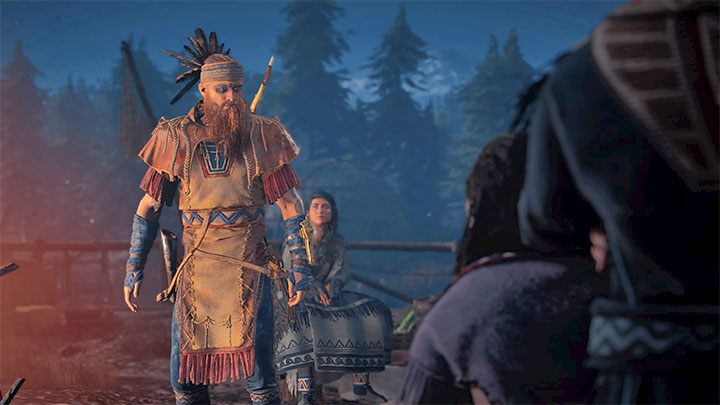 If you want, you can try to get an Arenhare'ko:wa armor set in addition to a melee weapon and bow - it is shown in the attached picture. This will allow to get two bonuses to statistics:

Unfortunately, the Indian armor cannot be used in England. It is only available for the duration of your stay in the land of Vinland and can replace the default slave clothing. 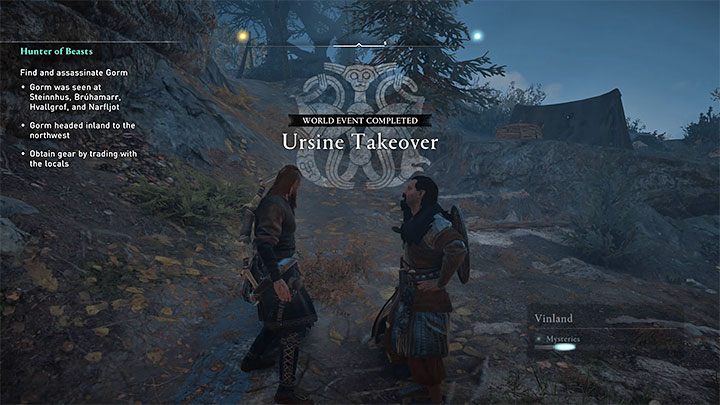 In Vinland you can find vantage points, hostile camps, plunder, and mysteries. Vinland's only valuables are the chests with ingots. In case of secrets, these involve unique events as well as optional activities (e.g. new mound or new fight with legendary animal). You can do all the optional stuff on a regular basis or only after you've completed the main story in Vinland. The game will not rush you to leave this land. 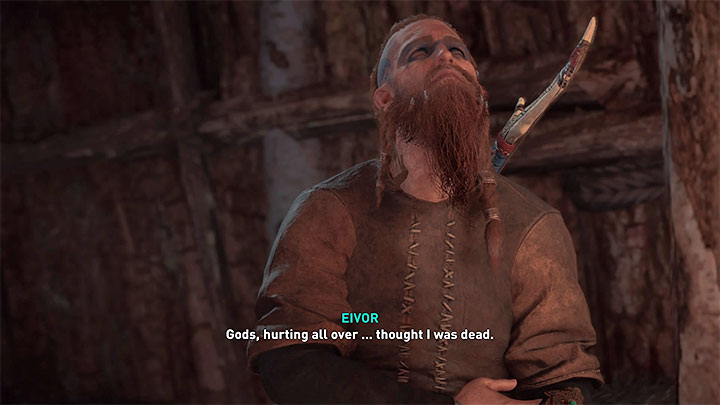 The interesting thing is that after Eivor's death you will not see the game over screen, but you will be moved to the main Iroquois camp. You will find out that you have been cured and you can resume the game.

How to return to England? 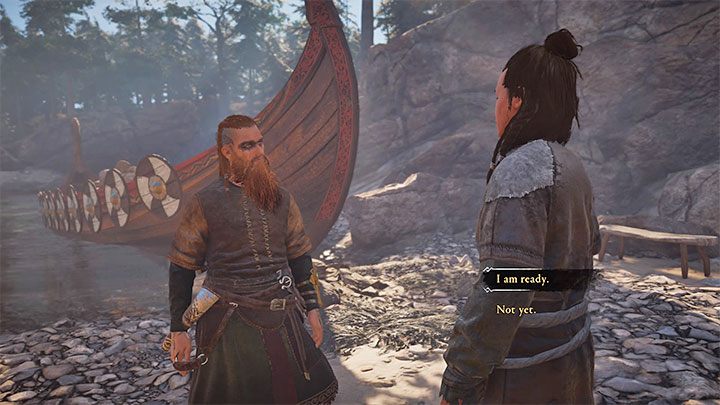 Leaving Vinland is possible at any time of the game, even after arrival in this land. You need to talk to Nessa or Hilde on the shore and confirm your wish to return to England. 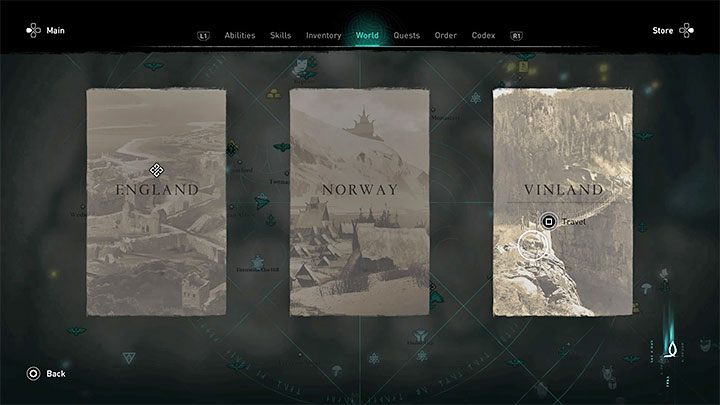 If you want to visit Vinland again later in the game, it is easiest to do it by calling the atlas in the map menu (press Triangle / Y). You can choose Vinland from the list of known lands.