This page of the Assassin's Creed Valhalla game guide contains information on how to identify and eliminate The Lyre from the Order of the Ancients. This man is one of the five Maegesters of the Order. We break down the personality of Lyre and the six remaining members of the order that rank below this Maegester.

The page discussing the Order of the Ancients is in preparation. We will add more descriptions in the near future. 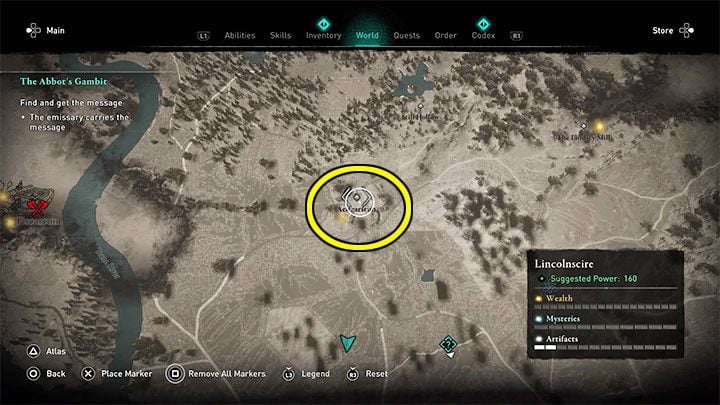 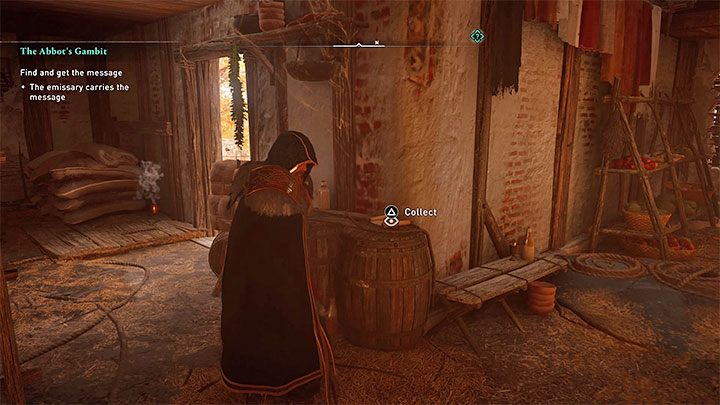 Clue 2/2 - Visit Aelfgarstun located in the western part of the Lincolnscire region. The clue is in one of the huts. 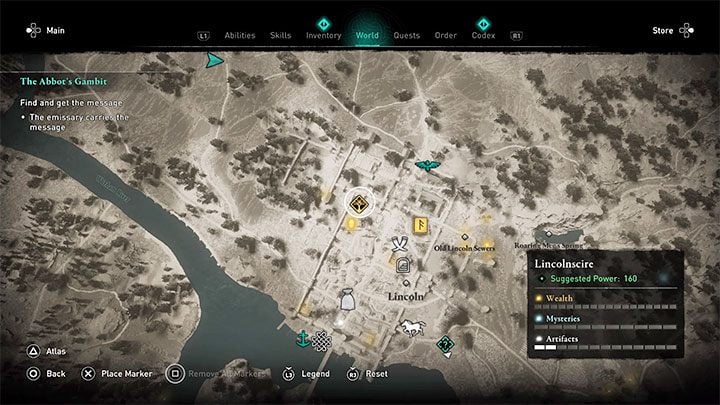 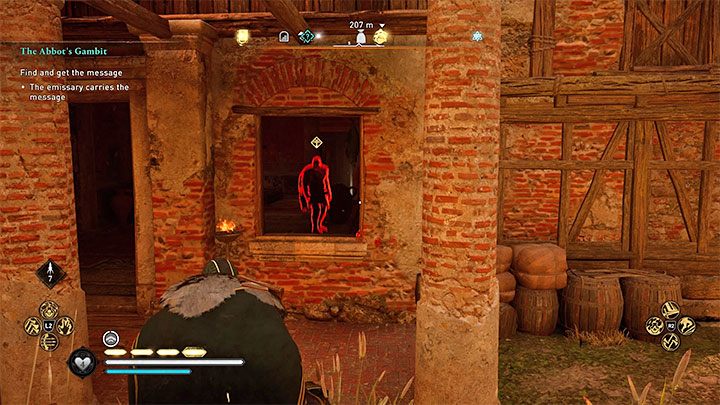 Havelok – The Billhook is located in the northern part of the city of Lincoln in the Lincolnscire region. You can find him in front of one of the huts or inside the building. 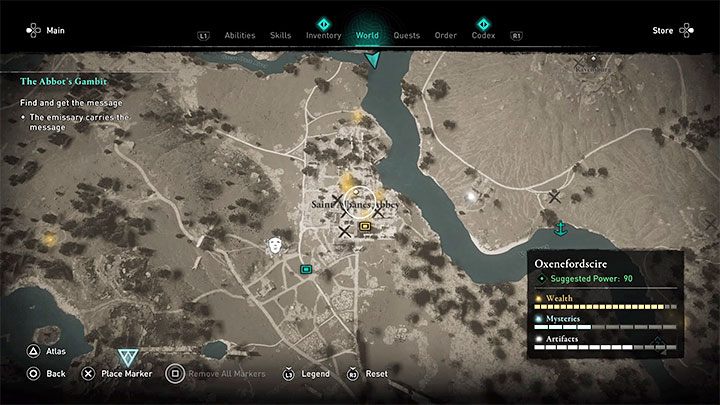 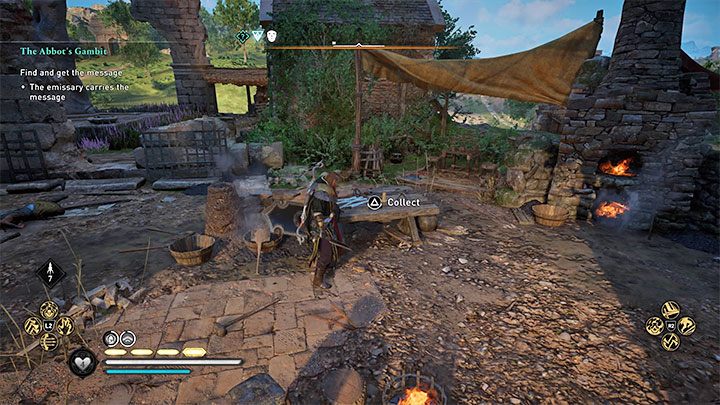 Clue 1/2 – Kill a member of the Order called The Scabbard. This is one of the people described on the page about Maegester 5 - The Keel.

Clue 2/2 – Visit Saint Albanes Abbey located in the Oxenefordscire region. You can find the clue in the forge. If you do not want to fight, sneak into the forge to avoid enemies in the abbey. You don't need to start a raid. 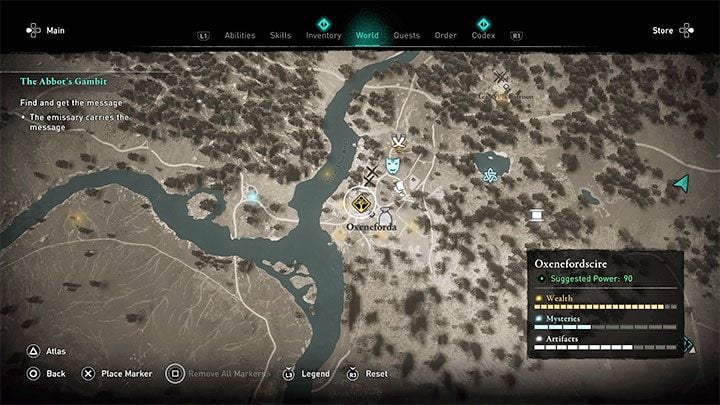 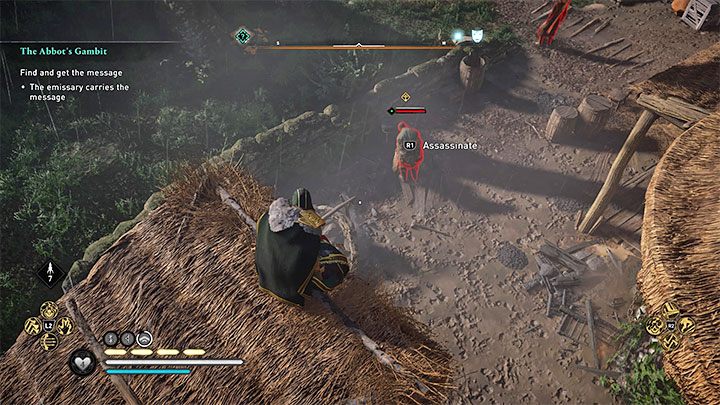 Patrick – The Anvil is located in Oxenforda located at the western end of the Oxenefordscire region. You will find the target in the forge. The easiest way to kill Patrick is to use the hidden blade. There should be no guards in the area, but to be sure, leave the village quickly after the assassination. 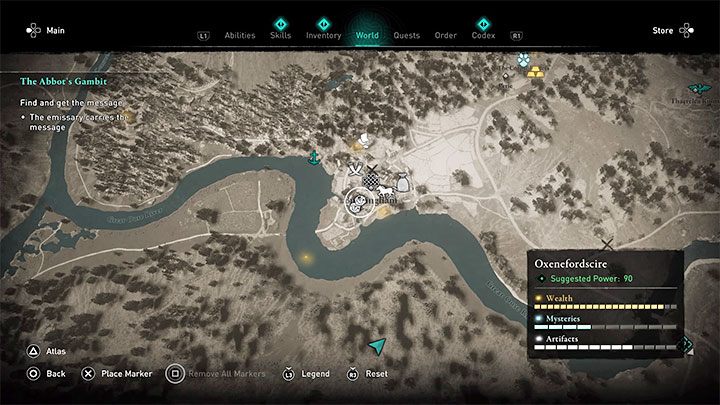 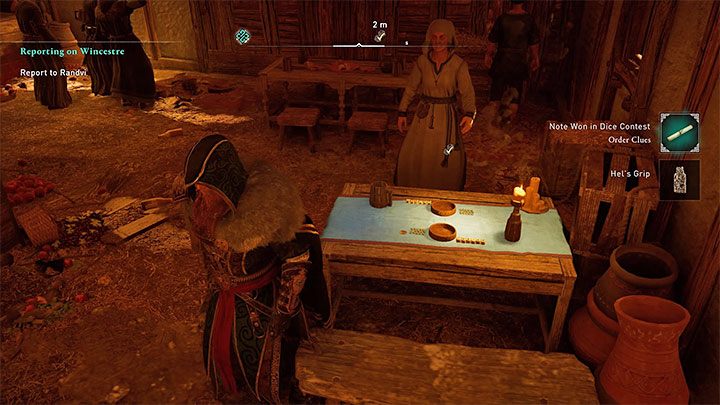 Clue 1/3 – Kill a zealot named Horsa. He travels on the border of the Oxenefordscire and Grantebridgescire regions (check out the page dedicated to the zealots).

Clue 2/3 – Visit Buckingham in the Oxenefordscire region. You have to defeat the local orlog player (a dice mini-game). 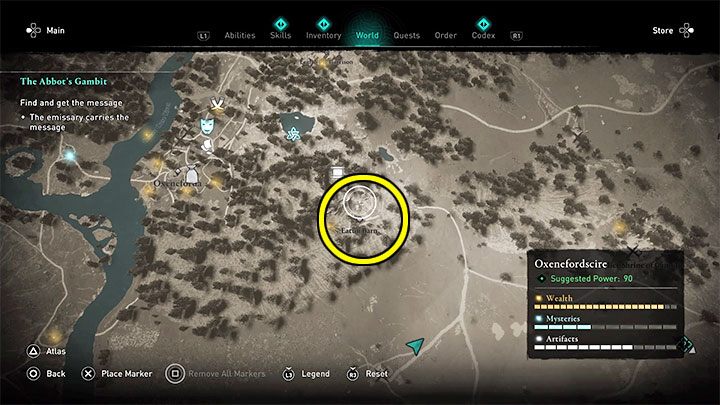 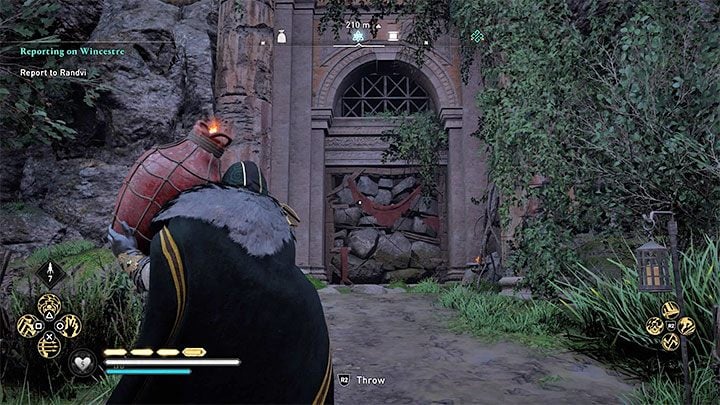 Clue 3/3 – Go to Eatun Barn adjacent to Oxeneforda at the western end of the Oxenefordscire region. The clue is in the cave, which is accessed by a weakened wall - use an explosive shot or throw a red jug with oil at the wall. Go through the cave and move a large obstacle to reach the room with the clue. 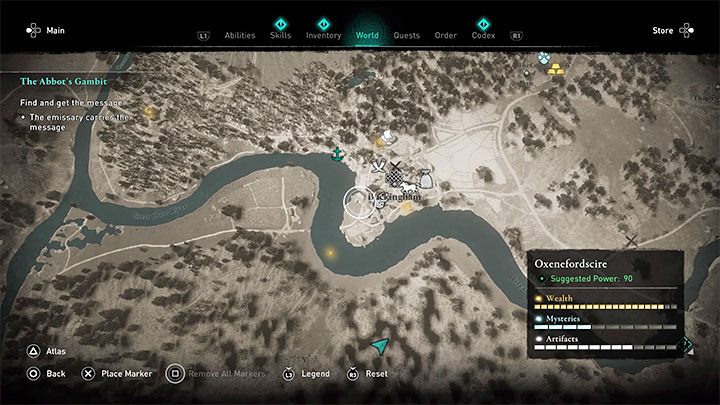 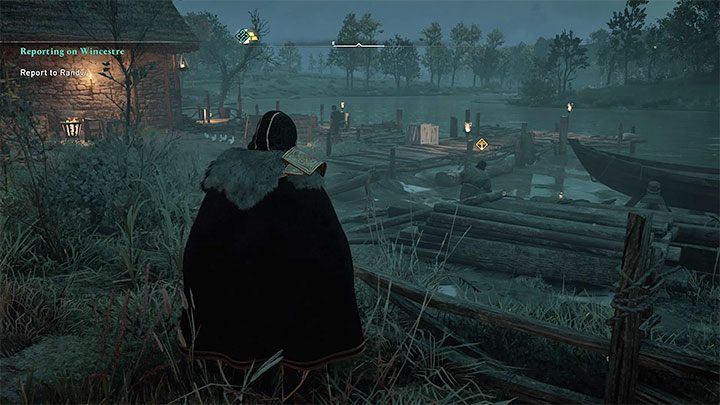 Mucel – The Lathe is in Buckingham in Oxenefordscire. The target can be found walking around the village or sitting by the water. Wait with attacking until there are no guards in the vicinity. 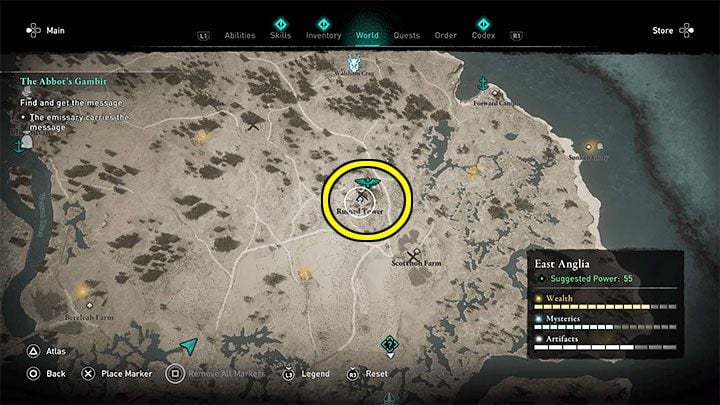 Clue 1/2 – Kill a zealot named Wuffa. He travels in the East Anglia region (go to the page about the zealots).

Clue 2/2 – Go to the Ruined Tower, one of the fast travel points in the East Anglia region. The clue can be found on the cart at the base of the tower. 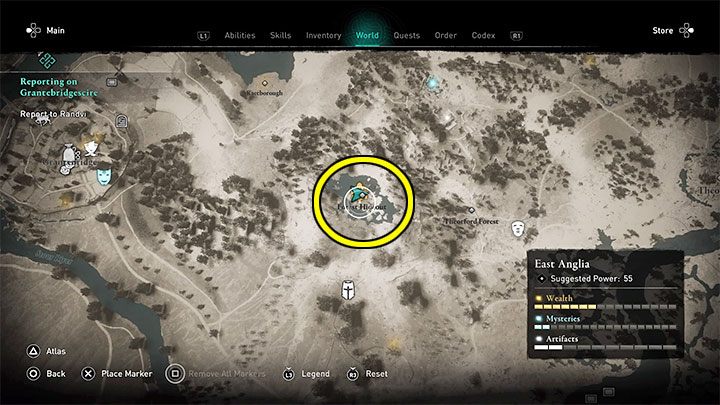 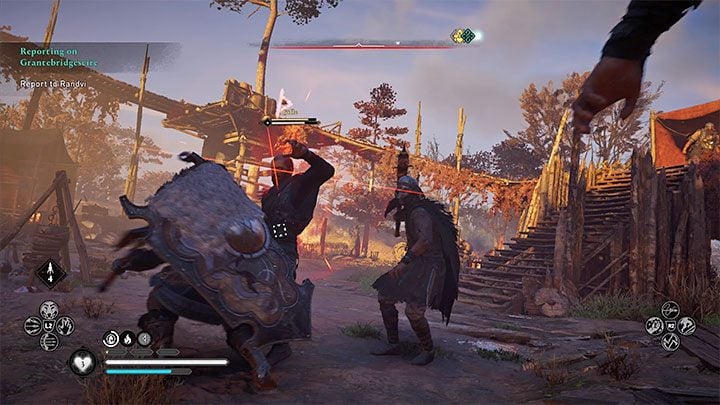 Gifle – The Ash-Spear stays in a hideout in the Forest Hideout, located in the East Anglia region, east of Grantebridge town. You do not have to kill all enemies from the camp. All you need to do is to kill the Gifle himself - you can defeat him in an open confrontation or using stealth (preferably with a reinforced hidden blade, because this is an elite enemy). 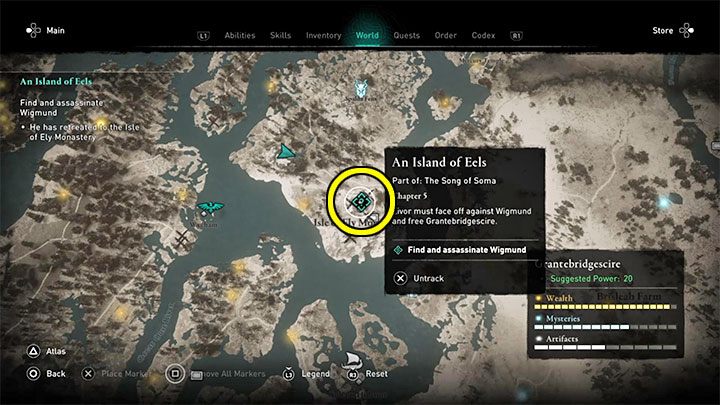 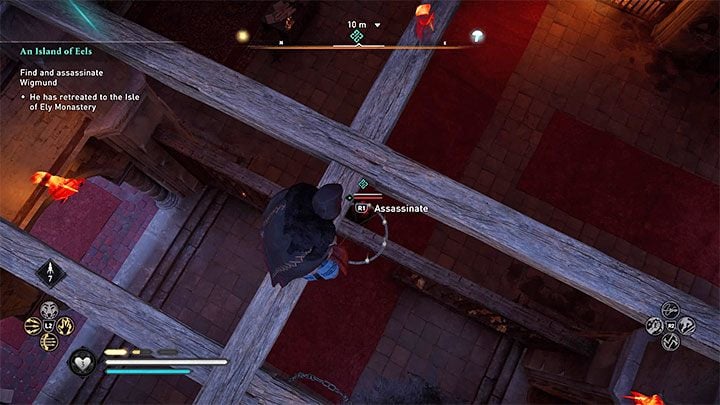 Wigmund – The Tang is a member of the Order. You will defeat him during the campaign, specifically the storyline associated with the Grantebridgescire region. The paladin is hiding in the Isle of Ely Monastery visited as part of the main quest An Island of Eels. You can attack the abbey or sneak into it and murder Wigmund with a surprise attack. 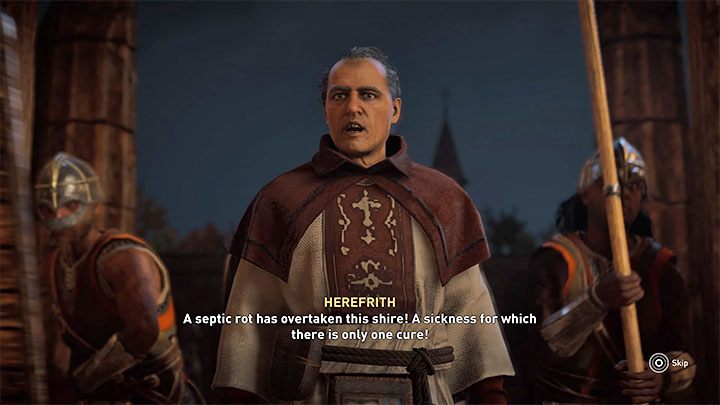 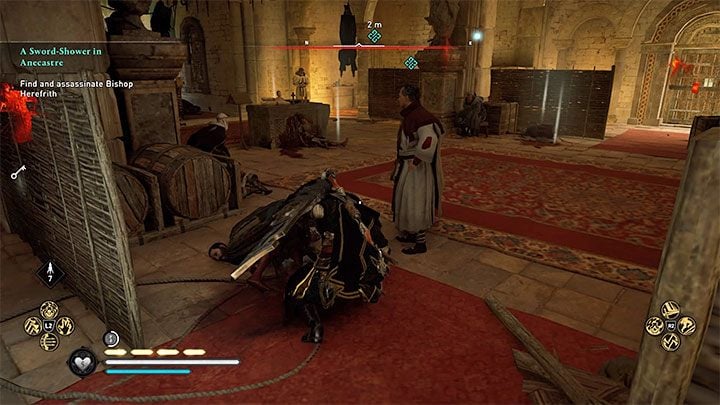 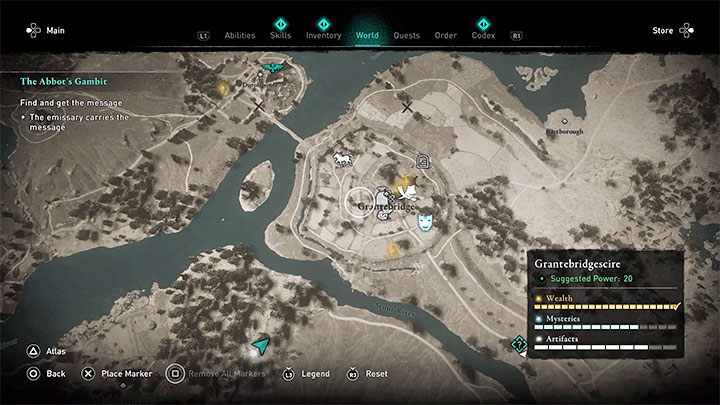 Tatfrid is Maegester The Lyre. His identity is discovered automatically after identifying and killing 6 other members of the Orde.

Tatfrid is located in Grantebridge in the Grantebridgescire region. He can perform various activities and walk around the settlement, e.g. playing an instrument. Try to sneak up on them from behind and use the hidden blade.