On this page of the Assassin's Creed Valhalla guide you will find a detailed walkthrough for The Sons of Ragnar storyline mission.

Siegfried went northwest to the town of Repton, where Ivarr and Ubba Ragnarsson are plotting to overthrow the current King of Mercia and replace him with another ruler. Eivor, after talking to Randvi, decides to help them. 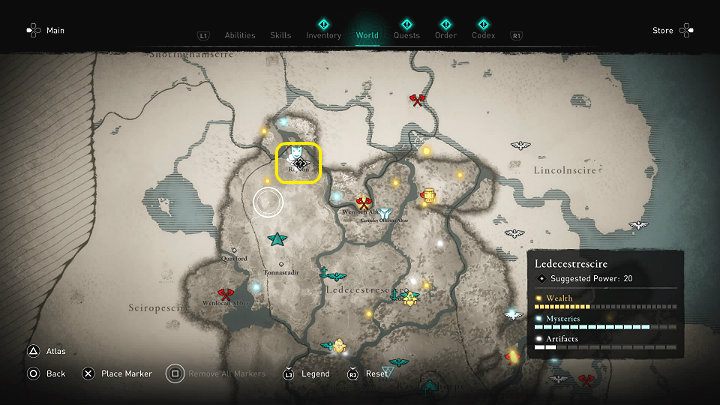 There are two ways to get to Repton: by land or sea. Water transport will be much faster, but on foot, you can reveal a little bit of the map - the choice is yours. 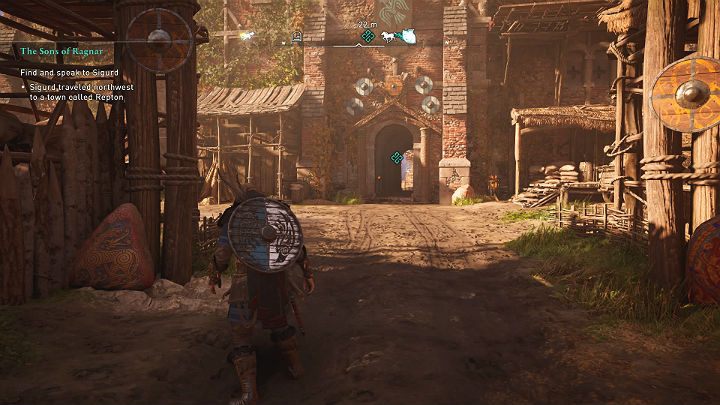 When you enter the marked building you will witness a brutal scene in which Ivarr tortures one of his spies. After the cut-scene, follow the Viking. 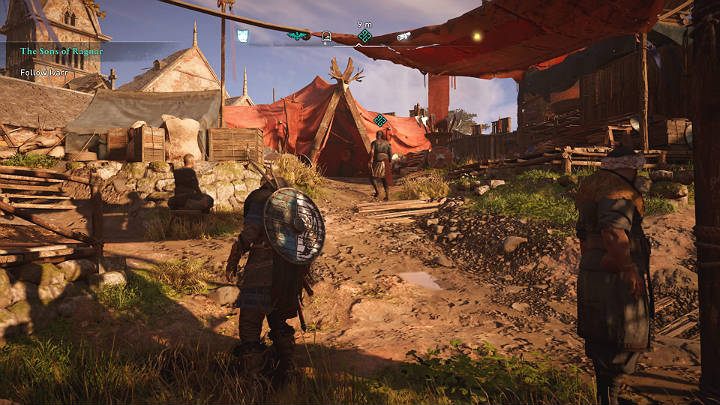 Ivarr will tell you a little bit about Repton and take you to the red tent, where Sigurd is staying. When you go inside you will witness another cut-scene in which the Vikings talk about getting rid of the current king and replacing him with a new one - Ceolwulf. During the conversation you will be able to decide twice on one of three dialogue options. Which option you choose will not matter much. 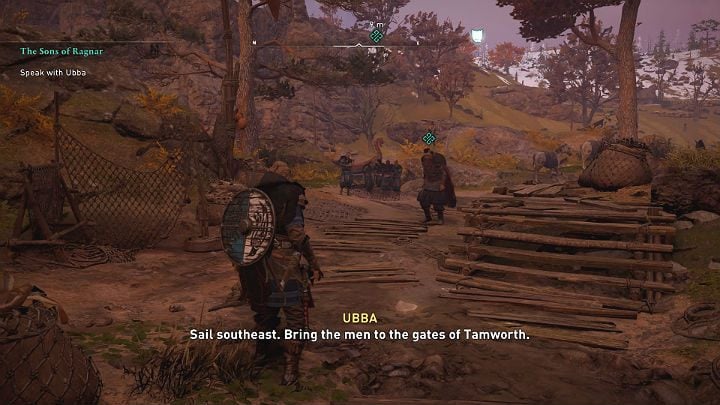 After the meeting, go to talk to Ubba - you will find him at the port. During the conversation, it turns out that Ceolwulf sent his son, Ceolbert, to help. 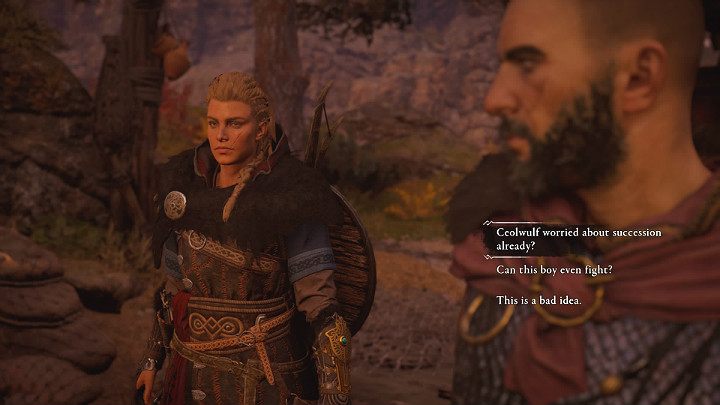 You can choose one of three dialogues. If you decide on the third one, you will find out that it was mostly Ivar's idea, not Ceolwulf himself. Nevertheless, the boy will follow you.

It is time to go to Tamworth to give Ceolwulf the crown. Call your mount or use one of the horses that are near the port and follow Ubba and Ivarr. 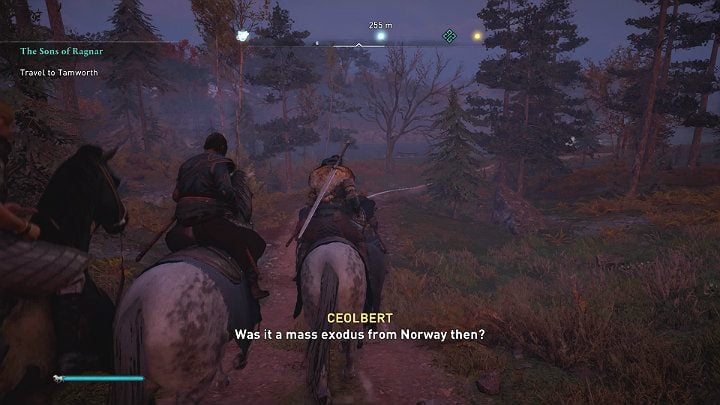 The journey will take a few minutes so it is best to decide to follow the main road. In the meantime you will be able to listen to interesting dialogues. 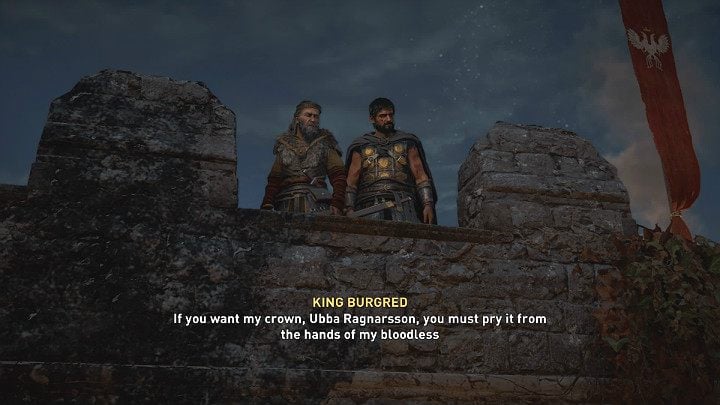 You will be welcomed by King Burgred himself. Unfortunately, the negotiations will not work here, and the king will not want to give up - he would rather die than give up his crown. 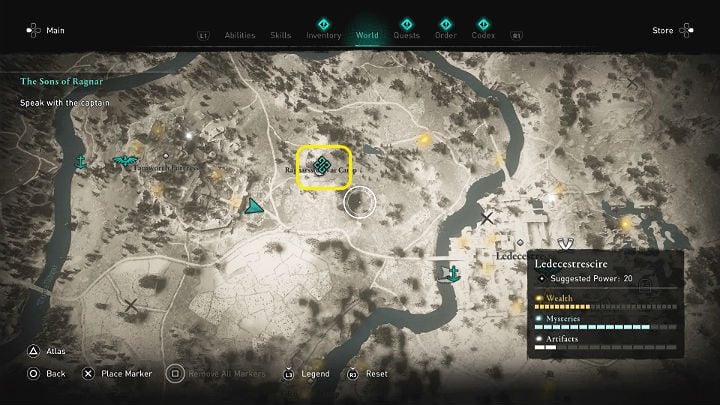 After the confrontation, go to the nearby camp of the Sons of Ragnar to talk to the captain. If you decide to attack Tamworth Fortress, you will immediately move on to the next stage of this mission.

The Tamworth Fortress is well fortified, but fortunately, the Sons of Ragnar are well prepared and have large rams. 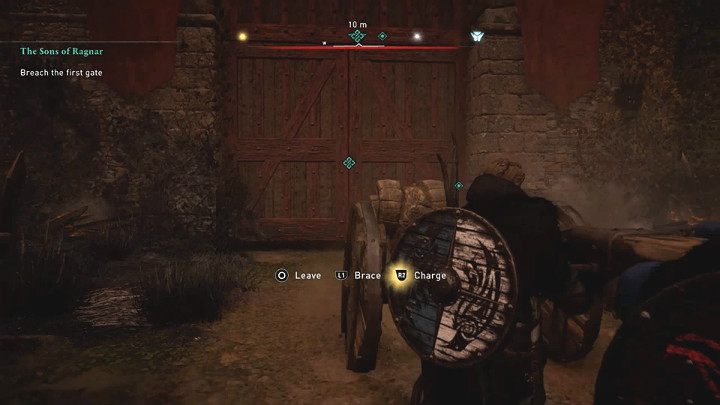 After starting this stage of the task, immediately approach the battering ram and help the other warriors to breach the first gate of the fortress. Move the battering ram to the right distance and when the button responsible for the charge is highlighted, launch the attack. 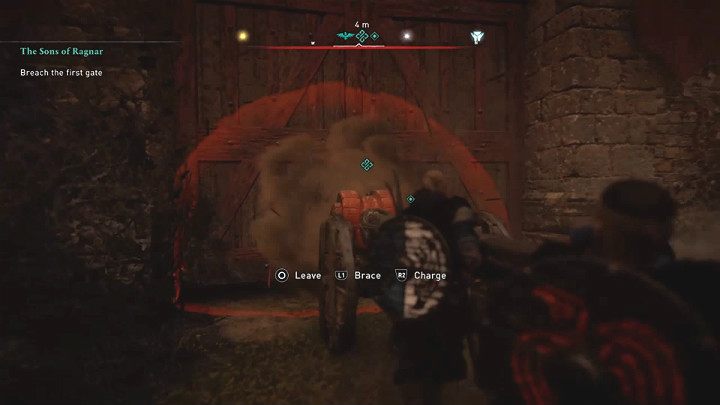 If enemy archers are firing on your position, use a shield to protect yourself from incoming projectiles. Archers attack is indicated by a red circle on the ground.

After breaking down the first gate, you can fight several warriors of King Burgred or go straight to the next main goal of this task. 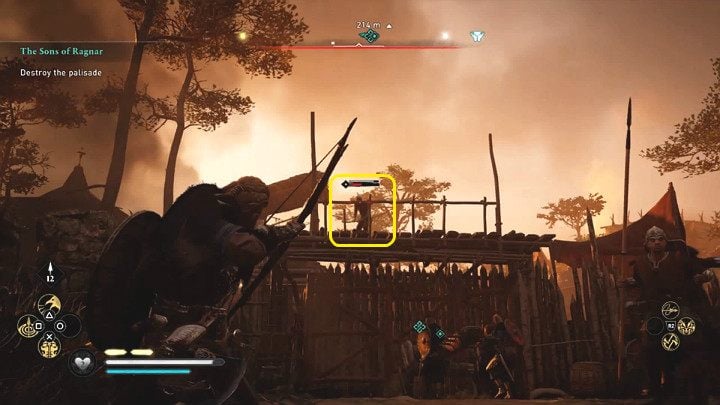 First of all, get rid of the archers standing on top of the palisade so that they don't fire at your hero when you breach the wooden gate. 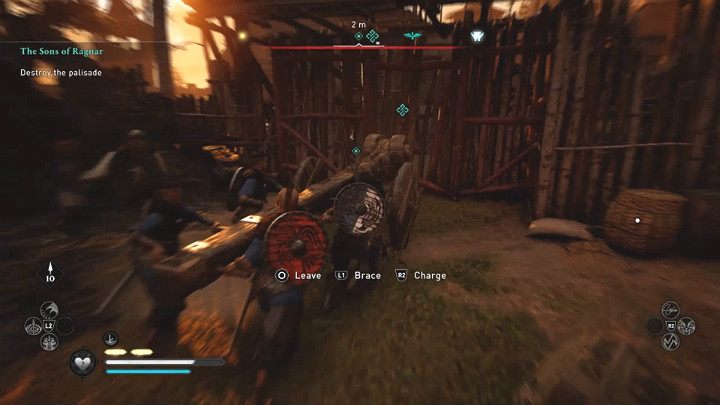 Go up to the warriors holding the battering ram and help them to breach the gate. This gate is much less durable than the previous one.

When you enter the next part of Tamworth Fortress, focus on eliminating the enemy troops and wait for your comrades to bring the ram to the gate. 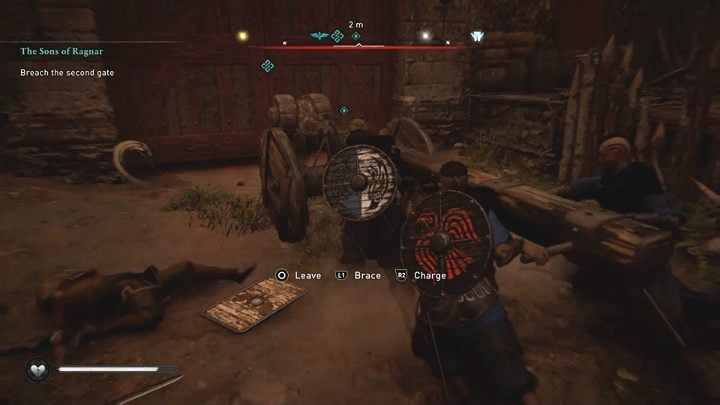 Now you have two options. You can focus on quickly breaching the gate so you move on to the next phase of this task. 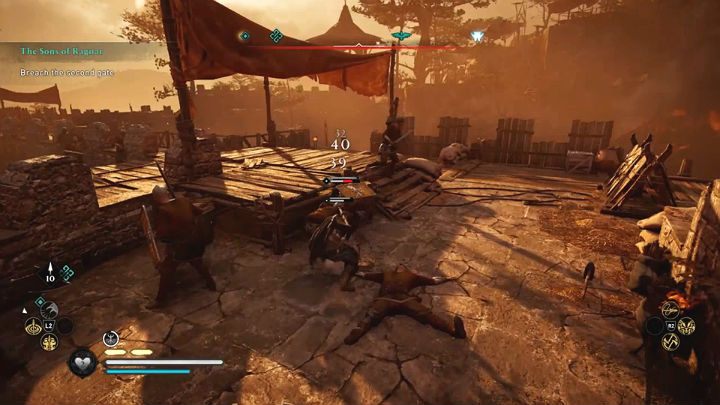 You can also climb the fortress walls and fight incoming soldiers, however, you should take into account the fact that they will keep arriving until you breach the gate. The warriors of the Sons of Ragnar should handle the battering ram themselves.

After moving to the inner ring of the fortress you will have to locate and then eliminate the two elite warriors of the king. 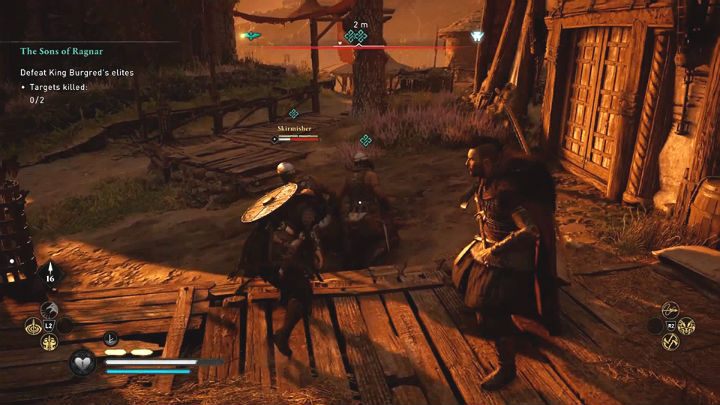 You will find them on a hill, by a long house, far from the center of the fight. To make this task a little easier for yourself, try to eliminate one of them quietly. When you defeat the elites, the assault on Tamworth Fortress will be over. 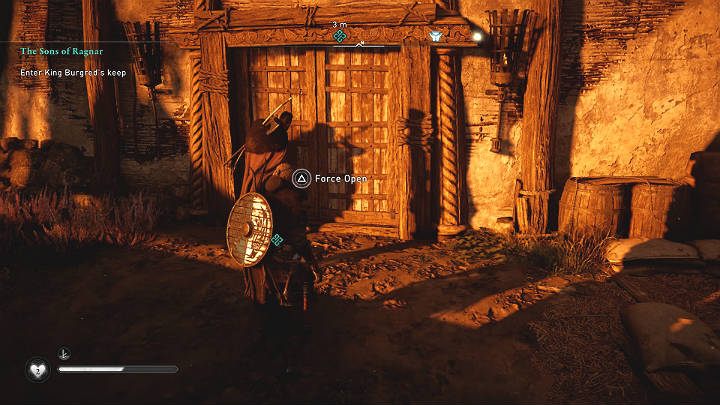 Come to the door and get inside the king's fortress. As it turns out, the building will be completely empty and there will be no trace of the king. Apparently, he managed to escape.

Search the keep for hints of the king's whereabouts 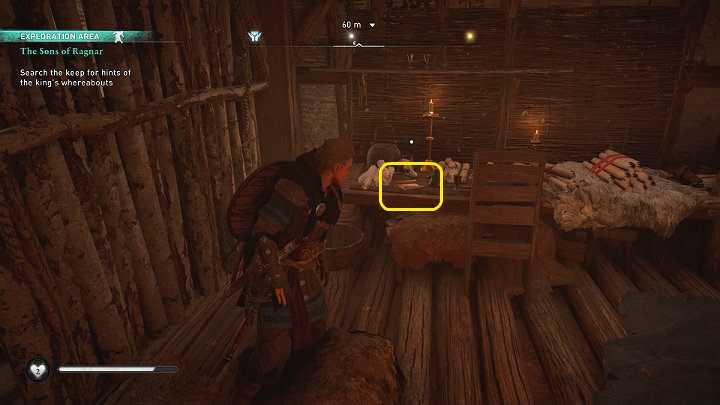 The first and last clue can be found in the room on the left side, on the table with a lot of rolled up cards. 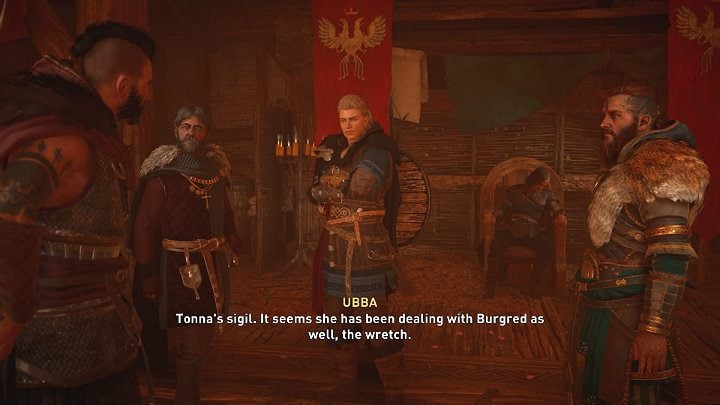 When you find it, go to Ivar to make a report. After a while Ubba, Sigurd, and Ceolwulf will enter the building. The conversation ends this quest - you'll receive 5 100 XP as a reward.