On this page of the Assassin's Creed Valhalla guide, you will find a detailed walkthrough of A Cruel Destiny quest.

Eivor, together with Sigurd, Basim and a handful of brave warriors, invaded Nottfall to take supplies from Kjotve's army. Guthrom and King Harald are also here – they offer their help in the fight against Kjotve. The siblings go to Florla to attack the enemy fortress.

Here are the individual stages of A Cruel Destiny quest: 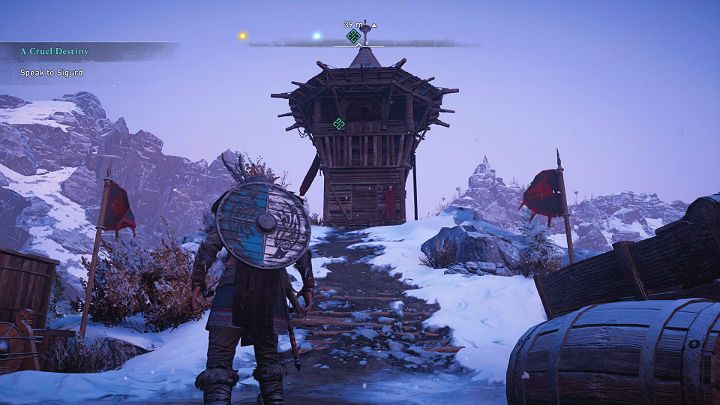 Talk to Sigurd to start A Cruel Destiny quest. You will find him in the observation tower together with Guthrom. 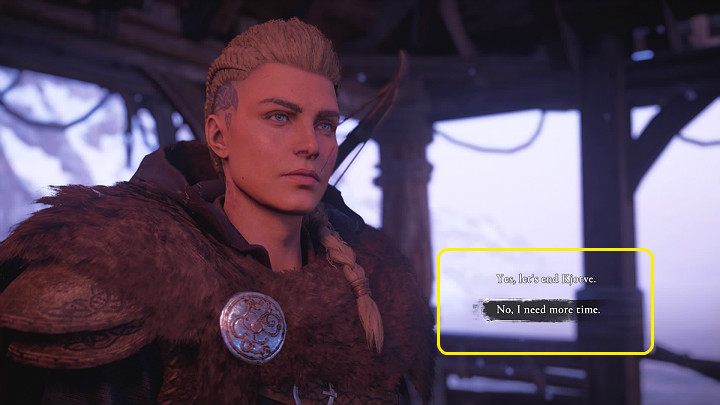 Accepting the order to attack Kjotve's fortress starts a boss fight – you will face Kjotve himself. If you want to do other things beforehand and, e.g. improve gear or replenish your food supply, you should do it now.

Kjotve is an extremely dangerous opponent – the battle with him can be divided into three phases. In the first one, the boss fights without weapons. In the second he will have two one-handed axes. The third phase of the fight will take place in a limited space. 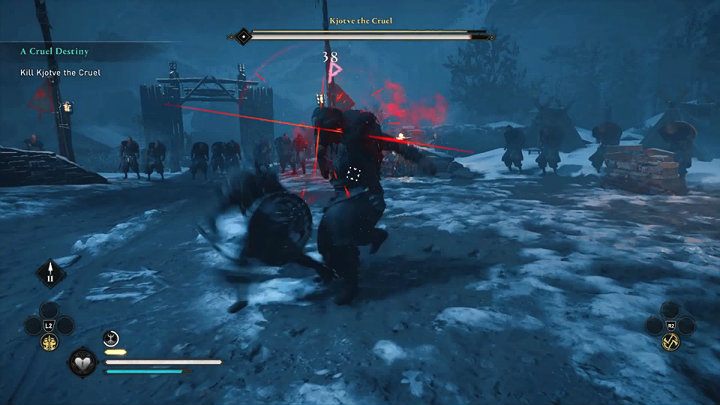 The opponent is confident enough to start a fight without any weapons, but this does not mean that he will be easy to defeat. Kjotve is an incredibly strong wrestler so he will try to shorten the distance between him and his opponent and catch them in his powerful arms. All his stronger attacks are signaled by a red aura around the boss appearing just before he attacks. When you notice it, immediately make a dodge to get out of Kjotve's reach. 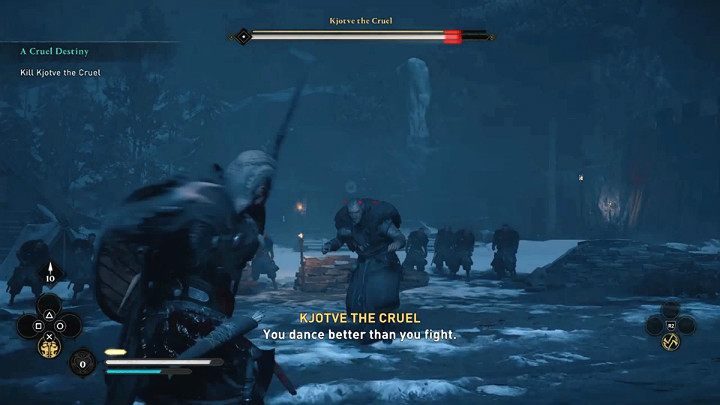 It's best to damage the bosses with quick attacks after you avoid his punch. If you manage to move away from Kjotve, you will be able to shoot him with a bow – remember to aim at his head to do as much damage as possible. 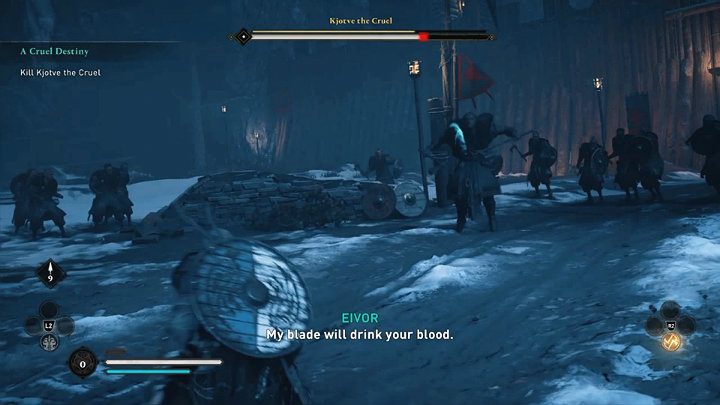 When Kjotve loses about 1/4 of his health, he will go for his weapons: two one-handed axes. Use this opportunity and shoot at least two arrows or use range skills like an axe throw. This should deplete a little bit of the boss' health bar. 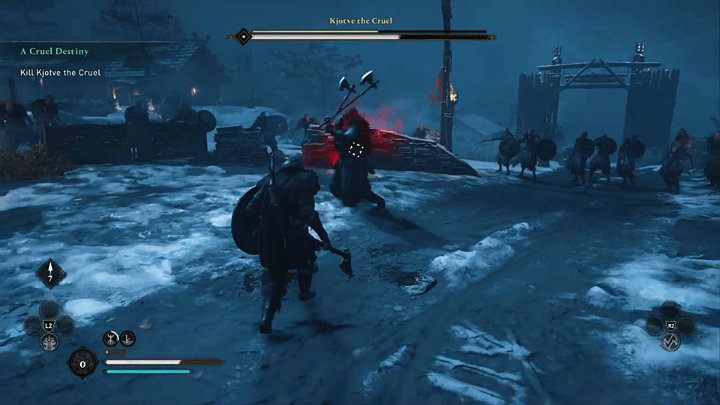 When you see a red aura around Kjotve when he lifts his axes up, it means that he will make a powerful swing. Stay out of the range of this move – it can do really big damage. When Kjtove misses, he loses balance for a short while and is vulnerable to attacks. 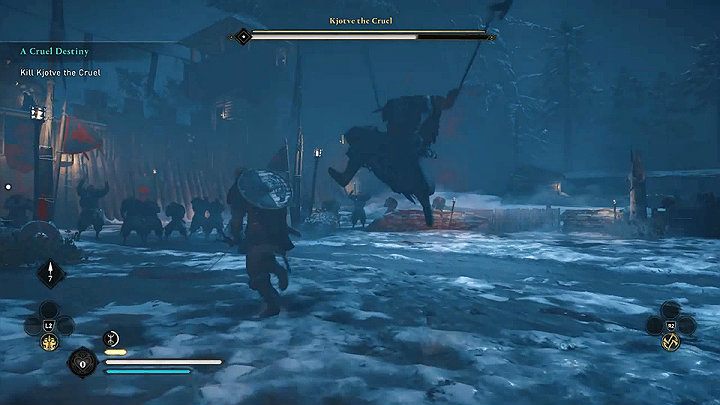 His lunge attack is also extremely dangerous. When Kjotve jumps into the air, he will hit you with both axes at the same time – this attack can take a lot of your health. Try to run away from the boss or dodge to the side. 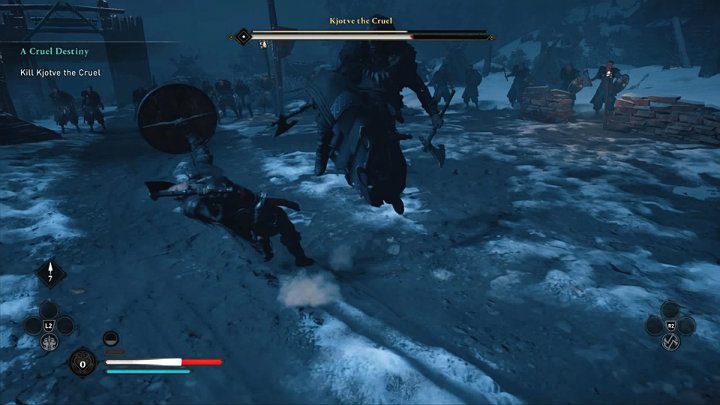 You should also watch out for the jump attack where he hits you with his knee. When the attack connects, Eivor will lose nearly 1/3 of their health points, get knocked down, and exposed to further attacks. Dodging to the side opens up a chance for a quick counterattack. 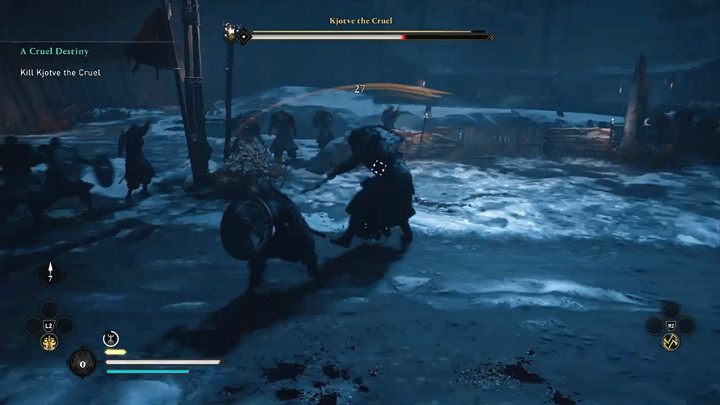 When Kjotve's axes start to leave an orange streak of light, it means that he is about to use another special attack. While moving towards you, he will first swing one weapon and then the other or both at once. This attack has a large range so try dodging behind the opponent's back – you will be able to use one heavy or 2 light attacks. 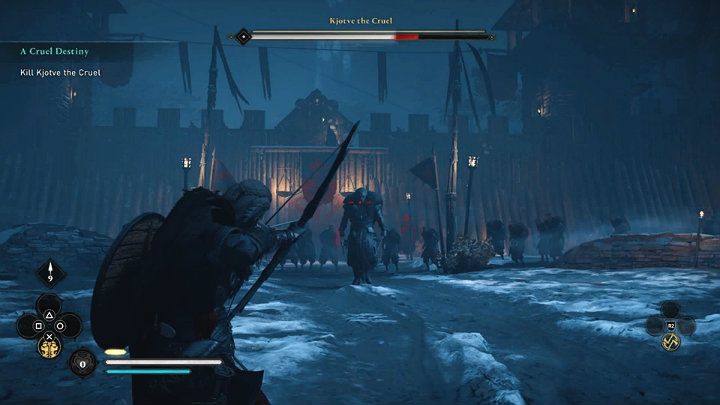 Every time Kjotve misses his attack and charges too far forward, shoot him at least once – this will help you quickly move on to the next phase of this fight.

Sometimes Kjotve manages to deflect an arrow with one of the axes, but he doesn't always do that. 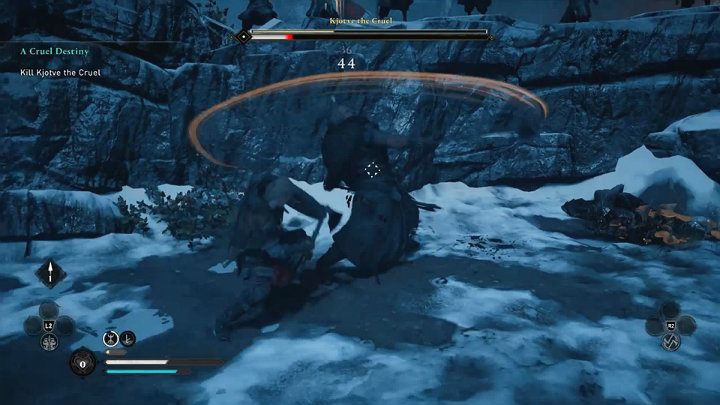 The fight moves to another area – you will have much less room for maneuvering. Your opponent will try to strike you off balance with powerful swings. However, all attacks are signaled so if you are careful enough, you will certainly avoid them. Attack after a successful dodge or block but do not stay too long near Kjotve. 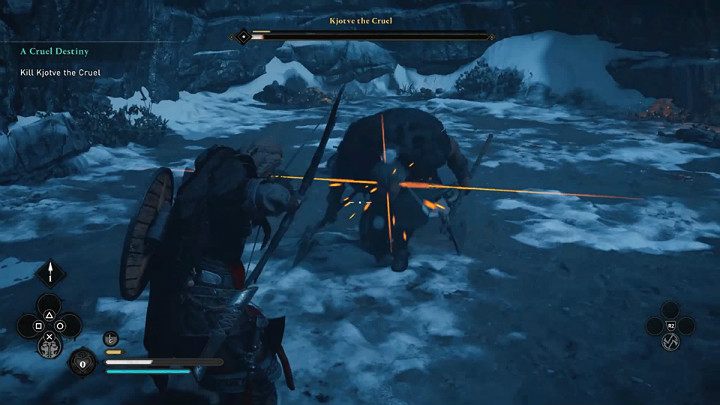 Kjotve has a jumping attack with his knee – the same one from the second phase of this duel. Get out of the way when you notice that he is preparing to charge. When you dodge to the side, you'll have a chance to perform a quick counter. 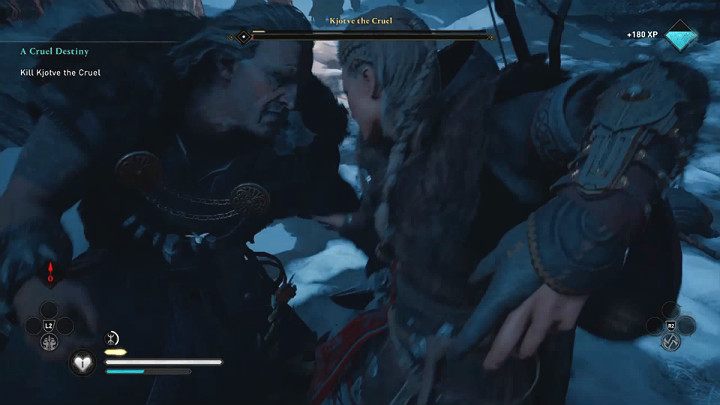 Take advantage of your opponent's mistakes, dodge and counter, attack from a distance, and you should quicklydeal with Kjotve the Cruel, one of the many bosses encountered in Assassin's Creed Valhalla.

After defeating Kjotve in an honorable fight and thus avenging the death of their father Varin, Raven's Clan must break through the outer gate to get inside the fortress. 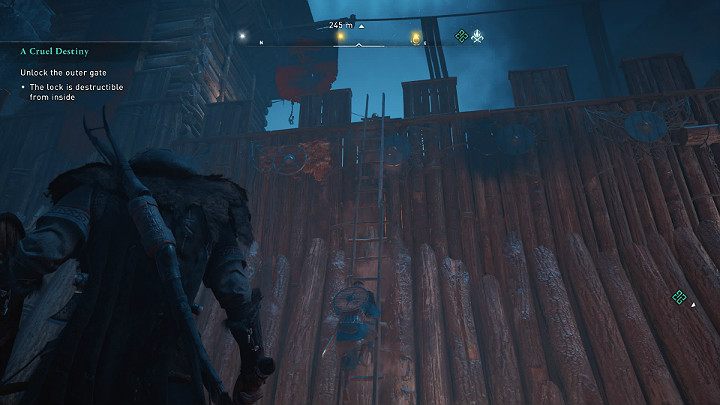 Note that your warriors started to place ladders against the walls. Use one of them to enter the fortress. If you wait for too long, your opponents will try to knock the ladders. 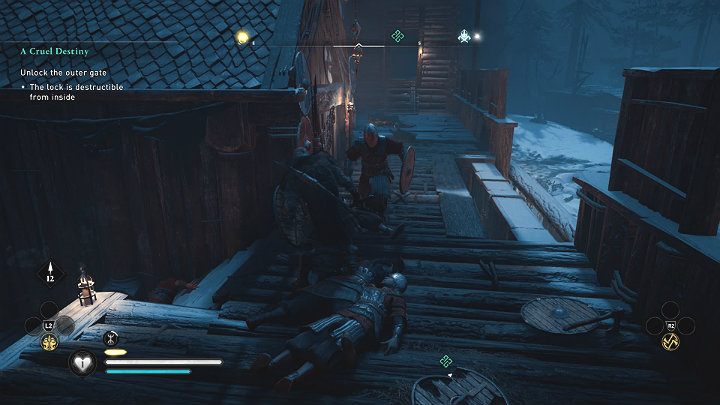 After entering the fortress, you will have to defeat several opponents. They are regular warriors so they shouldn't cause you any problems. 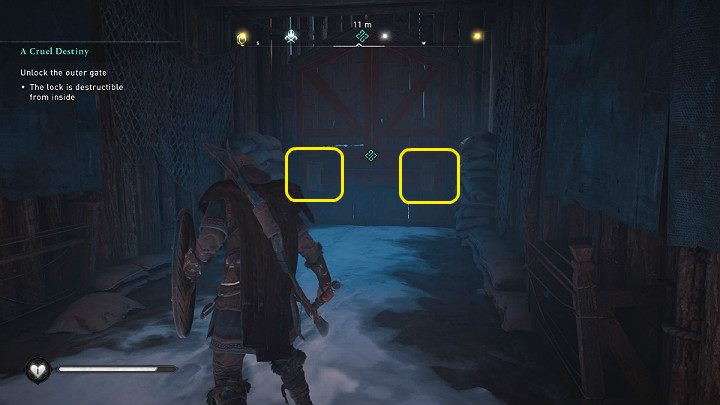 Jump to the very bottom, enter the tunnel, and then break up the supports of the beam (on both sides) that blocks the gate. Open the gates to let your troops in.

Only one gate separates Eivor from entering the main fortress area and confronting Gorm, the cowardly son of Kjotve. 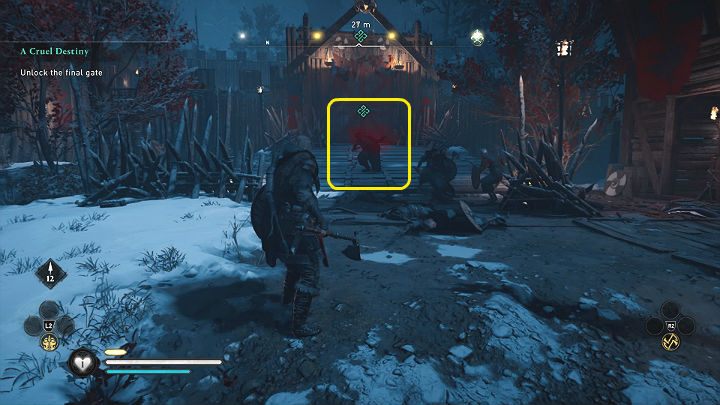 A stronger opponent guards the gate. This enemy is not only tough but can also attack from a distance. You don't have to fight him alone – get rid of his guards, and a few of your warriors will be happy to join the fight. 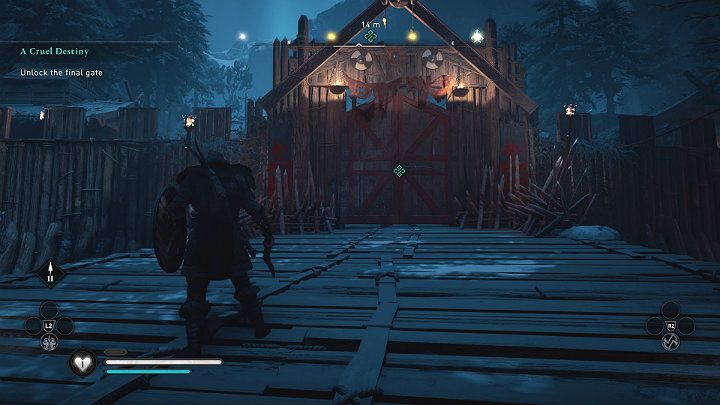 Then climb up the palisade to jump to the other side of the gate. You will notice many opponents, but do not get involved in the fight. 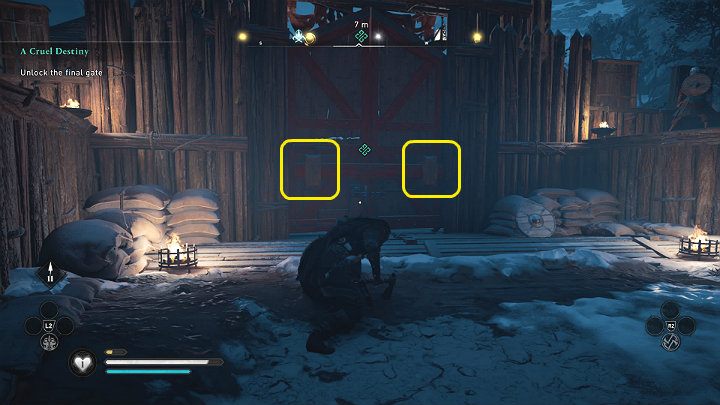 Approach the barricaded gate quickly, break down the blockades and open the passage for your army. They will take care of the remaining enemy troops.

Gorm is in the temple guarded by many soldiers. You don't have to fight them at all, you can go to the main mission marker right away. 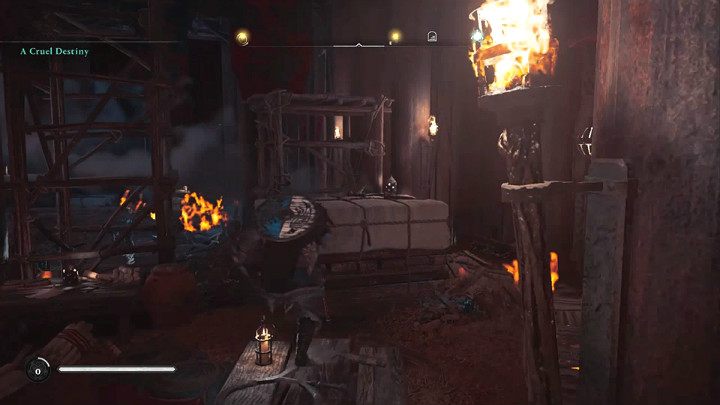 As soon as you enter the temple, you will notice Gorm on the upper level of the building. Climb the scaffolding and leave through the window. 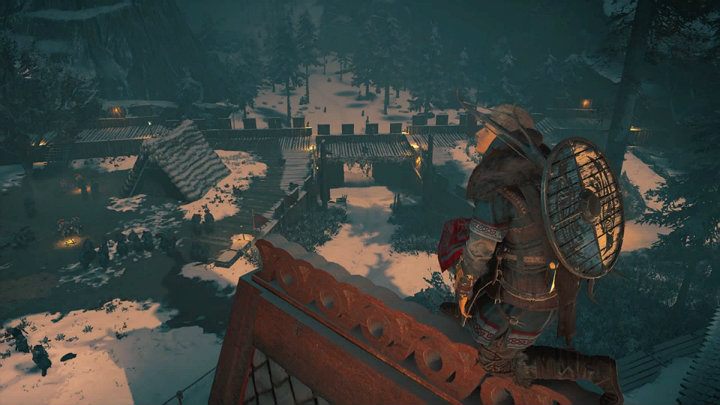 Unfortunately, Gorm has managed to escape. Go downstairs and talk to Sigurd to complete the quest. As a reward you will receive 3 400 XP.