This page of our guide includes a set of starting tips regarding Assassin's Creed: Valhalla. We have prepared various hints and tips for beginners. These revolve around exploring the world, stealth mechanics, combat, and leveling up the protagonist - Eivor. 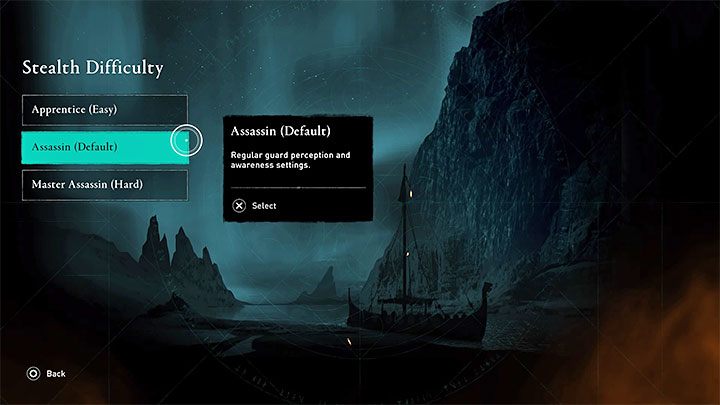 In Assassin's Creed: Valhalla you do not simply choose one main difficulty level. You can adjust the difficulty level exactly to your abilities and preferences. This is because the game allows you to set the difficulty level separately for exploration (e.g. the ability to find a destination or navigate easily), combat (enemies' strength), and stealth (ease of detection by enemies).

If you want, you can e.g. increase the difficulty of stealth and make it easier to locate collectibles or complete a given battle. It is worth experimenting with it because the game allows you to change the level of difficulty even after the campaign has started. You can find more information on the difficulty levels page.

Put on the raven's outfit after defeating Rikiwulf 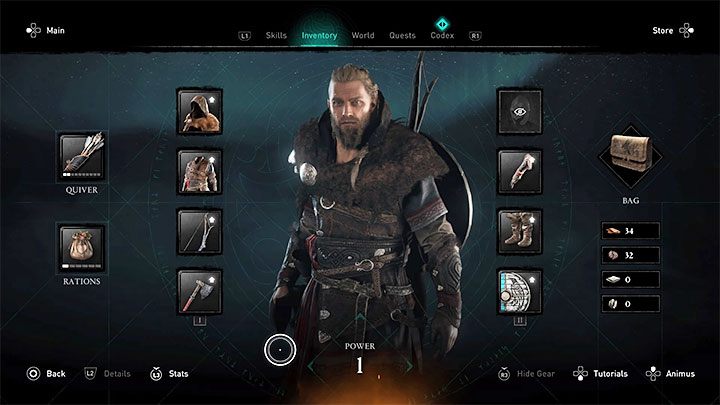 Rikiwulf is the first main boss of the game and the confrontation with him is described in the chapter titled Bosses. After you deal with Rikiwulf you will receive the raven clan items and it is worth equip them all immediately. This will increase Eivor's base stats, as he/she did not have any unique clothing items upon starting the game. It is also good to improve each of the items you wear regularly, especially as it will probably take some time before you start finding or receiving other valuable outfits.

An additional incentive to wear elements of the raven's outfit is the bonus received for wearing items from the same set (the armor bonus increases with the loss of health points and a greater chance of critical hits). Initially you get 4 out of 5 pieces of raven's outfit. The "missing" fifth element is a helmet you receive as a reward for defeating the second main boss - Kjotve.

Try to reach Power 20 before going to England 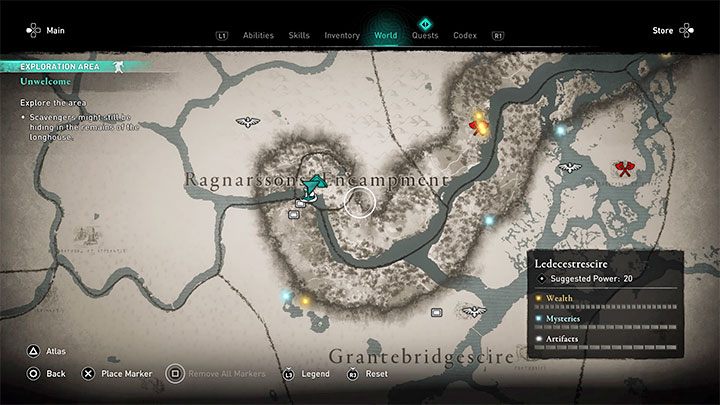 As a reminder, Power is a factor indicating how strong the hero is. You can increase this parameter mainly by upgrading your character to the next experience levels and assigning the acquired skill points to unlock new skills from the development tree. Entering a region with too powerful enemies means serious problems - enemies will be more difficult to defeat and will do deal much more damage.

Try to reach Power 20 before you leave Norway and go to England for the first time. The first two regions in England are recommended for Power 20 characters. You can achieve this value by completing not only main quests but also side activities such as events or finding secrets during the first hours of the game. You will find more information about the described mechanics on a separate page Suggested Power for a Region.

Use Odin's Sight to locate enemies, keys and treasures 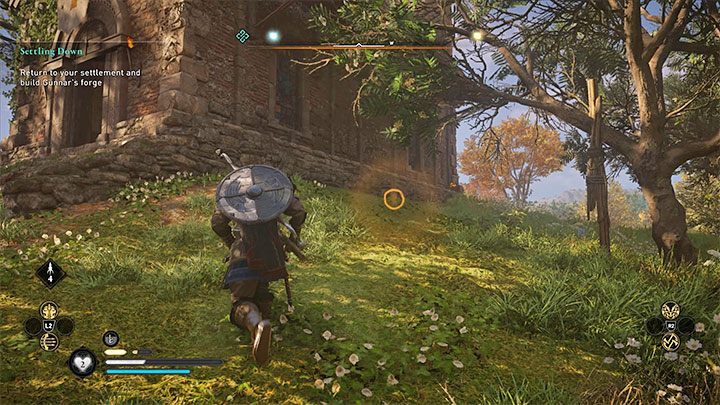 Eivor can use Odin's Sight from the very beginning of the game and it is not limited in any way. The special vision mode revolves around scanning the environment for interesting things. Above all, Odin's Sight can be useful to you for:

Return to Gunnar with the found ingots 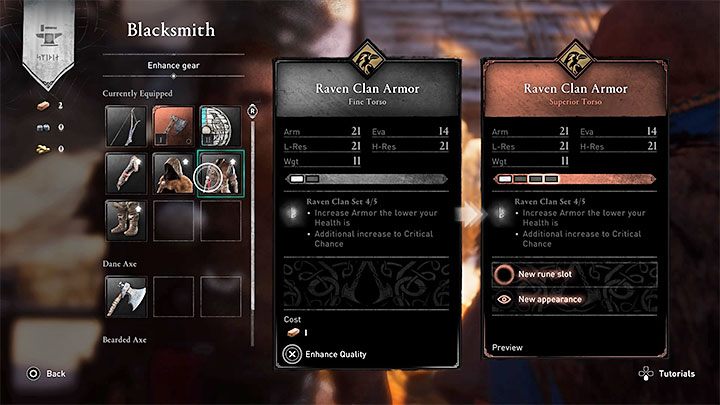 Gunnar is a friendly blacksmith - during your stay in Norway you can find him in the village of Fornburg, and after moving to England you will be given the mandatory quest of building a hut for him in the newly established Viking settlement. Gunnar has the skills to improve the quality of Eivor's items, which increases their maximum number of improvements and allows them to "install" runes.

Keep returning to Gunnar with the ingots found in the game world, as they are used to "finance" equipment improvements (and not silver). However, please note that ingots come in three varieties. Their basic variety - Carbon Ingot - will only allow the upgrade of solid objects to excellent. If you want to make further quality improvements, you need to find rarer ingots. For more information, please see the page Improving your equipment.

Events allow you to gain a lot of XP 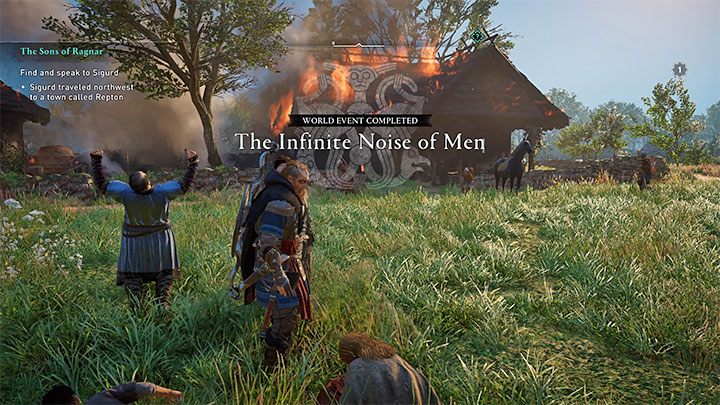 During the game, you can acquire experience points in various ways, with World Events being the second-best xp source after quests. We strongly recommend that you keep up to date with all the events found on the world map, as well as actively search for new ones (they may hide under the blue dots on the map).

Events are different kinds of small quests - you may, for example, be asked to help with completing a certain activity, to ease a conflict, or to find a missing item. They are neither difficult nor long. The game awards you with at least 1200xp for completing the event and especially in the initial phase of the campaign it can allow you to reach higher experience levels much more often. Locations of events can be found in our world atlas. We also described them in the walkthrough guide.

Use the hood to reduce the risk of detection 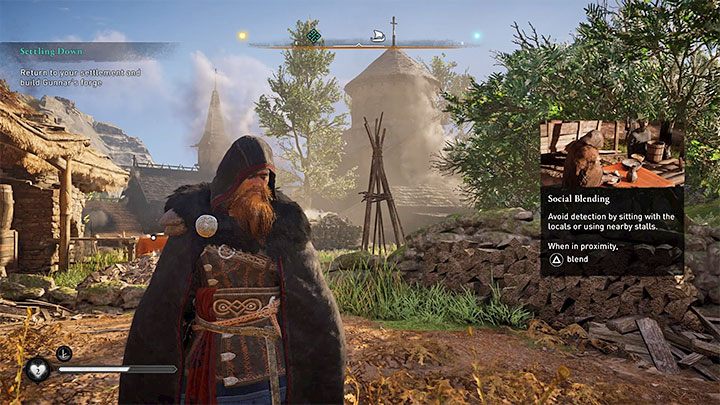 Eivor can put on the hood after selecting it from the drop-down menu (the lower direction key on the pad), but this is only possible if the hero is currently not fighting with anyone. The hood is useful in "orange" locations, i.e. locations where opponents can attack Eivor after he gets close to them. It has two main applications for sneaking around more effectively and staying hidden:

Use the materials for the first upgrades of rations and quiver. 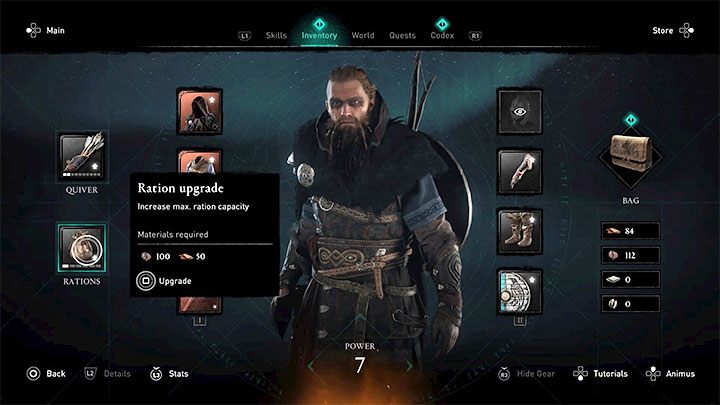 Information on how to obtain leather, iron ore, and other raw materials can be found on the separate page titled Crafting materials.

Make sure to quickly erect important buildings quickly in the settlement 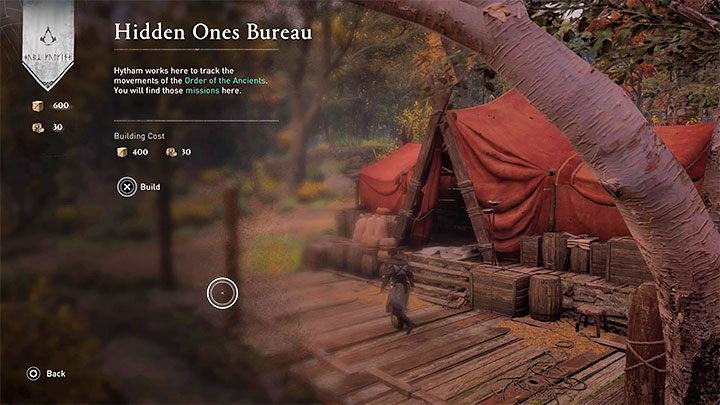 Gunnar's blacksmith hut is the only building in the settlement that has to be erected. You have a choice as to whether to build other structures but you must be aware of the fact that you will have a very limited stock of crafting materials. As a result, it is important to first erect buildings that will unlock important new game mechanics, quests, and features. Our recommendations are:

Other recommended buildings to be erected are listed on the page Best buildings of the settlement.

Raiding the monasteries allows you to acquire rare materials 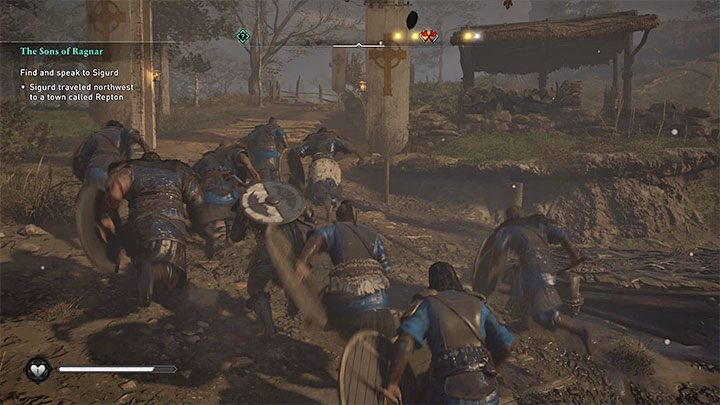 In order to erect the buildings listed in the previous section (and all others in the settlement), you need to have special materials. Unfortunately, you will never have any excess of them. The most problematic are Raw Materials, as they are not found in large quantities during a simple exploration of the game world.

Try to organize raids on the abbeys discovered on the world map. In each such location, you will find at least two large containers hiding raw materials. Raiding monasteries will primarily make it easier for you to erect a few initial buildings that do not yet require very large amounts of raw materials (an average of 30-45 materials per building).

For more information, please see the Raids and Settlement pages in our guide. 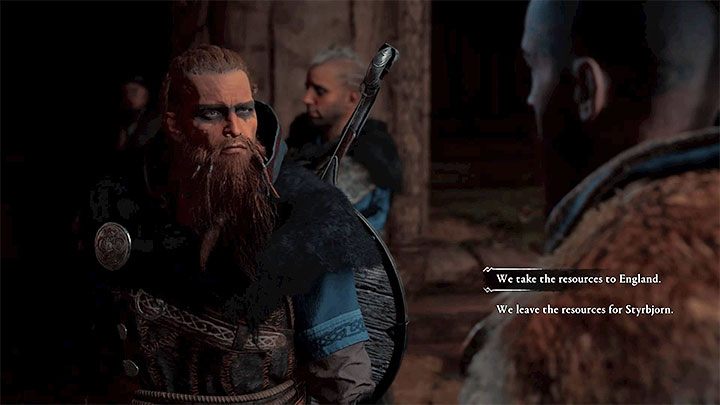 Assassin's Creed Valhalla, like AC Odyssey and AC Origins, draws inspiration from RPGs and this means, among other things, that in some quests you will make difficult decisions. Some decisions only slightly change the course of a quest or a single conversation, but there are also important choices in the game that have long-term consequences. Your decision may, for example, lead to the acquisition or loss of a potential ally, as well as contribute to unlocking another end of the game.

It is best to save the game before each conversation (you can create both manual and quick saves) in case of inappropriate behavior or generally choosing the "wrong" dialog option. Important choices are described in more detail in the FAQ section and are also included in our walkthrough guide.

Use the horn to summon your companions for help 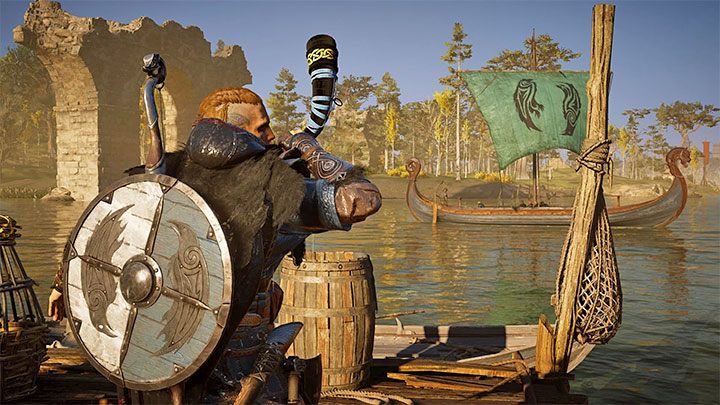 From the very beginning of the game, Eivor has a horn that has two applications - it can be used to summon boats and to summon crew members. In both cases, in order to use the horn, you have to hold down the lower direction key on the pad and select the appropriate item from the drop-down menu.

The second option is more useful. Duringyour stay in a hostile location you can summon other Vikings to help. This is particularly helpful in situations where you have failed with the stealth approach and have been detected, as you will not have to fight all your opponents alone. However, Viking support can also be useful when you want to secure a location faster. In a group you can get rid of enemies more easily.

Look around for the Books of Knowledge 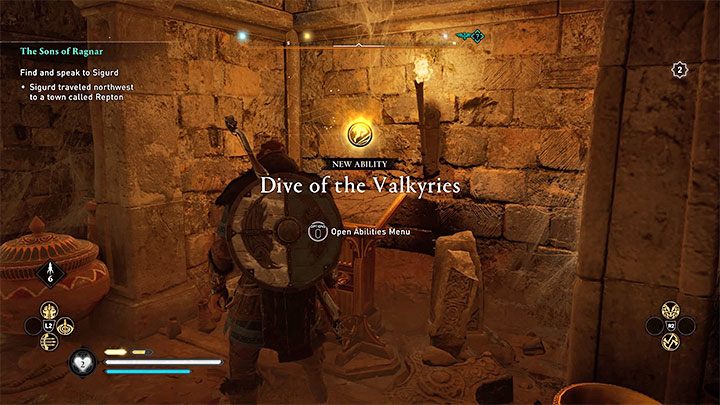 In addition to unlocking new skills you can also use active abilities. These are unique combat techniques involving the use of melee and ranged weapons. With abilities you can, among other things, shoot hails of arrows, throw axes, and charge at enemies. As abilities are powerful attacks their use is limited - you have to fill the special adrenaline bar.

The only way to unlock the new ability is to find the related book of knowledge - they are one of the collectibles type in the game. After you have learned the ability, you must add it to the shortcut bar - Eivor can have 4 ranged and 4 melee combat abilities equipped at the same time.

For more details, see the Abilities page within the FAQ chapter as well as the Secrent chapter, where we have included information about the location of the books.