This page of the AC Valhalla guide provides information on the exploration. Read it to find out whether there are large cities, how do the missions look like, and how important sailing is.

The game takes place in a large open world that is divided into four kingdoms - Wessex, Northumbria, Mercia, and East Anglia. The map is filled with different attractions to encourage exploration. Players can visit three large cities - London, Winchester and Jórvík (York). This is where you will test the parkour abilities of the main character. You will also encounter Celtic tribes. To make it easier to travel around the land, game developers have implemented mounts in the game - horses.

While exploring the map, you will also see many historical structures. The game's world includes many Roman ruins and Stonehenge. 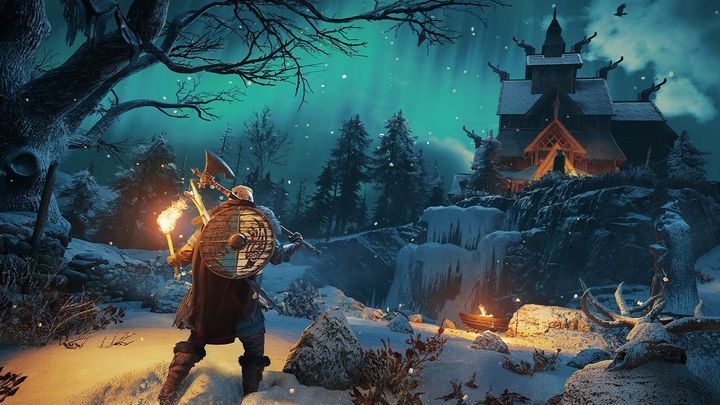 In some places you may also encounter environmental puzzles. These may include, for example, closed passages leading to a location containing bonus loot and items. To solve some of these puzzles you will have to use a particular type of weapon.

The whole thing has been constructed in such a way that you can take one of two paths of action - exploration and expansion. This means you can follow a peaceful path by focusing on diplomacy or you can decide to attack and loot. In addition, the world is designed in such a way that you can explore it freely. The title doesn't force you to grind - you don't have to complete activities that are less interesting to you just to reach a specific level.

The storyline missions are multi-stage and resemble TV series episodes. The whole adventure consists of smaller, separate stories, which will take you several hours to complete.

The developers also decided to expand side missions. Some of them have a five-act structure. By completing them, you will gain a new companion for your team or another inhabitant of your village.

Eivor's ship, Drakkar, also plays an important role in the exploration. You can summon this ship when you are in the water. It allows you to navigate the world more efficiently. It will also be used to carry out more complex raids.

More information about Drakkar can be found on a separate page of the guide.