On this page of the Assassin's Creed Valhalla guide, you will find complete information about combat. You will learn, among other things, how to effectively attack enemies, how to block or avoid attacks, and how to prepare for the most difficult fights.

Fighting - is it obligatory? 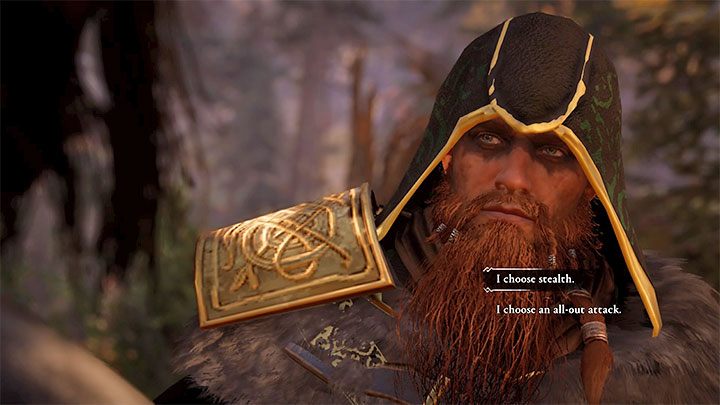 Yes, many of the fights in AC Valhalla are unfortunately mandatory. You won't be able to finish the whole game by just sneaking around and doing assassinations with a hidden blade and bow.

The obligatory fights take place mainly during many main and side quests. These can be both ordinary fights and larger battles (e.g. attacks on enemy forts) or boss fights.

While developing Eivor, don't focus only on skills, abilities and runes that boost stealth and assassinations. This can cause unnecessary problems during one of the obligatory fights – you won't be able to use, e.g. the damage bonus to stealth attacks.

Difficulty level of the fights 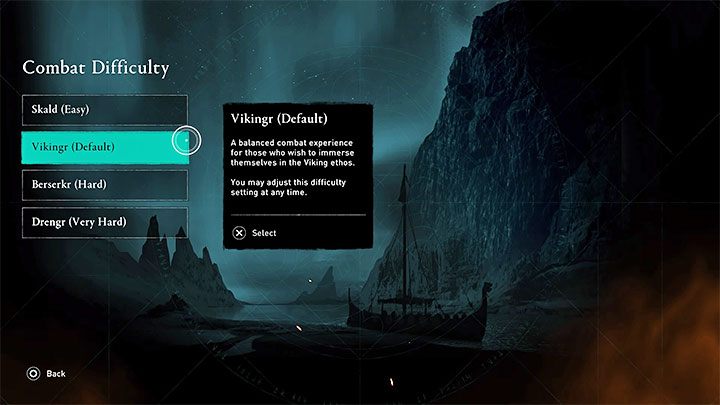 Assassin's Creed Valhalla allows you to separately set the difficulty level for fights. You can do this for the first time when you start a new game. The four main difficulty levels for this setting are:

The difficulty level affects mainly the number of health points your enemies have. They also have modified resistance and inflicted damage. Not only will it be harder to kill them, but it will also be easier for Eivor to die.

In addition to choosing the main difficulty level for the fights, you can also go to the options menu and choose additional settings. One of the important settings is the aiming assistant - you can choose how much the game will help you when aiming the bow. 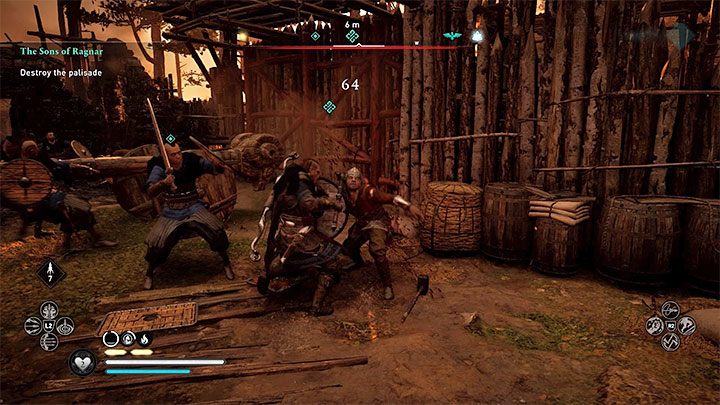 In Assassin's Creed Valhalla, Eivor can use light or heavy attacks with melee weapons. Heavy attacks deal more damage, but consume stamina (more about it in one of the following subsections) and can be easily interrupted by enemies. Light attacks don't deal this much damage, but they are faster and you can easily do several of them in a row.

Generally, we advise you to start every fight with at least 1 heavy attack. Rely more on light attacks when fighting, but also look for opportunities to use another heavy one - when you have enough stamina and you are sure that your opponent will not be able to interrupt Eivor. 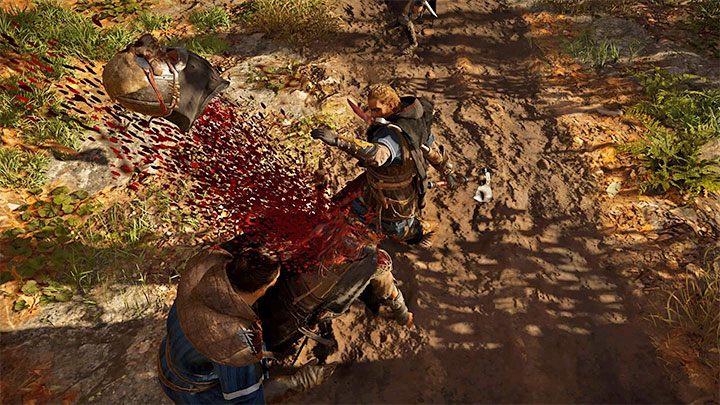 Eivor can use melee weapons:

It is best to test all three options and choose the one that is the best for you. The shield and weapon variant offers, in our opinion, the safest and most balanced gameplay. It is worth noting that even if you don't have a shield, Eivor will still be able to parry attacks. 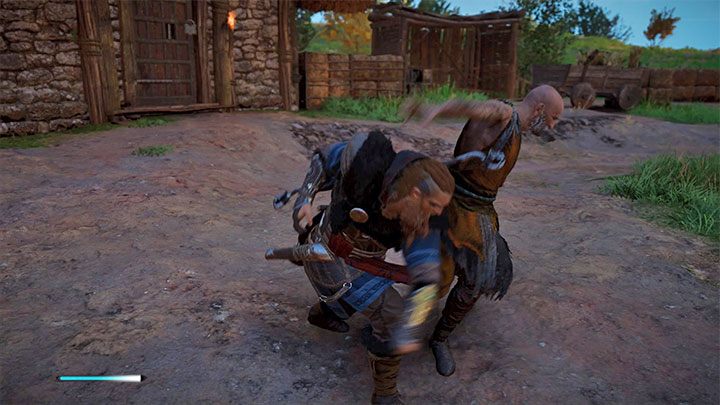 AC Valhalla also lets you fight with your fists. It is usually activated automatically when, for example, a given quest or event involves defeating an opponent or a group of opponents without killing them. You can still use strong and fast attacks as well as blocks.

Interesting fact - if you get rid of the weapon held in the left hand, the main character will start using the hidden blade as a replacement for it. The hero is also able to parry the attacks with the blade. 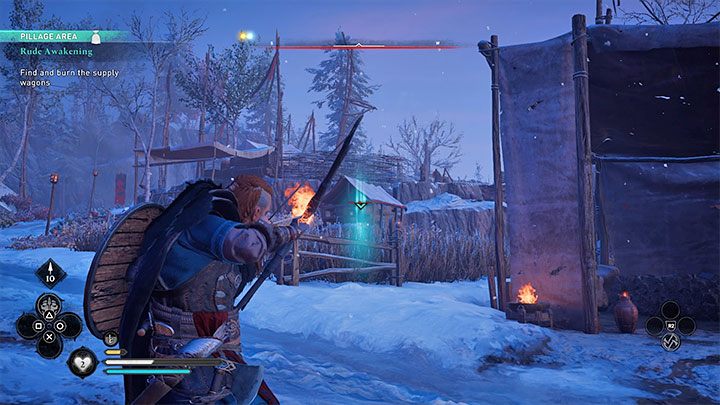 You can also attack enemies with a bow. We recommend using a light bow or hunter bow, as the predator bow favors slow and precise shots, which is more useful when sneaking and eliminating fixed targets with single accurate hits.

When using a bow, it is definitely worth to use ranged abilities, which may allow you to "overwhelm" enemies with arrows, or to use fire, explosive or poison arrows. It is also useful to aim at orange weak points on opponents' bodies. Hitting any such point is able to temporarily stun the attacked enemy. 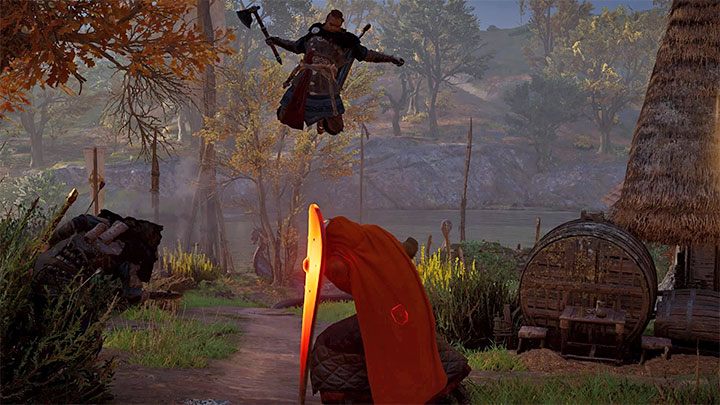 Other very helpful ways to eliminate enemies are abilities, i.e. special attacks activated by using the adrenaline bar. You can renew your adrenaline by attacking, and increase the number of adrenaline uses by buying the right skills.

One of our favorite abilities is Dive of the Valkyries, which allows Eivor to rise into the air and then hit the enemy with great force. You can unlock this ability by visiting the Isle of Ely Monastery in the Grantebridgescire region in Anglia. For more information and tips, see the Abilities - how to unlock? page. 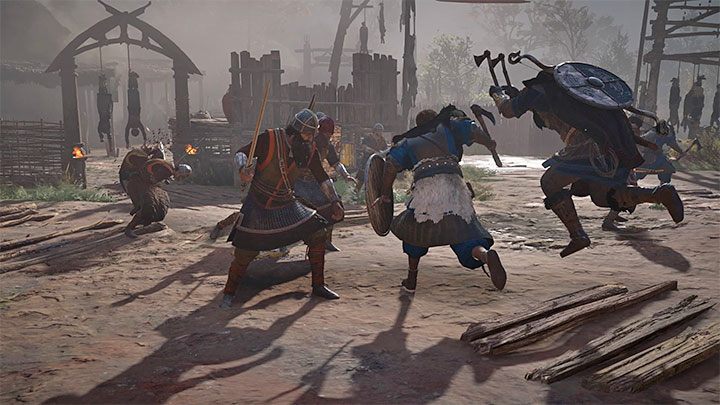 In some battles, you can be accompanied by allies – they can make the fights much easier, as most opponents won't be focused on Eivor. Look for the opportunity to attack enemies focused on fighting someone else from the back. This is particularly useful if you have runes that grant bonus damage to back attacks. 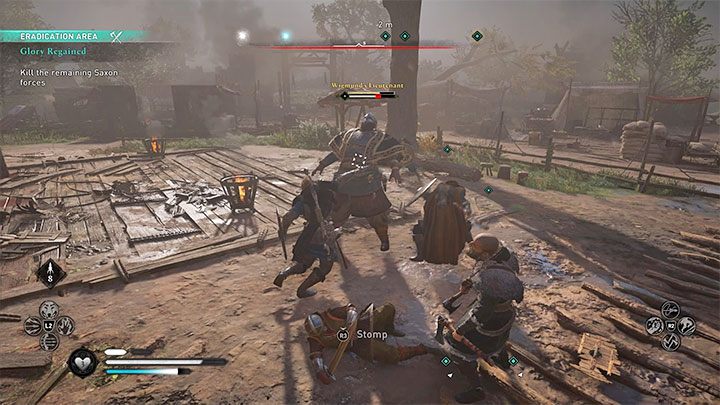 Apart from standard enemies, you can also face elite versions – you will recognize them by the names displayed above their heads and different-looking health bars.

The tactics of fighting these enemies do not differ significantly, although you must be aware that they will not be defeated so quickly. Try to deplete their defence bar to expose them to stronger attacks. You can also try to weaken them before the actual fight starts by sneaking up on them from behind and using the hidden blade. Elite opponents use red attacks more often, so watch their stamina and react to these unblockable attacks. 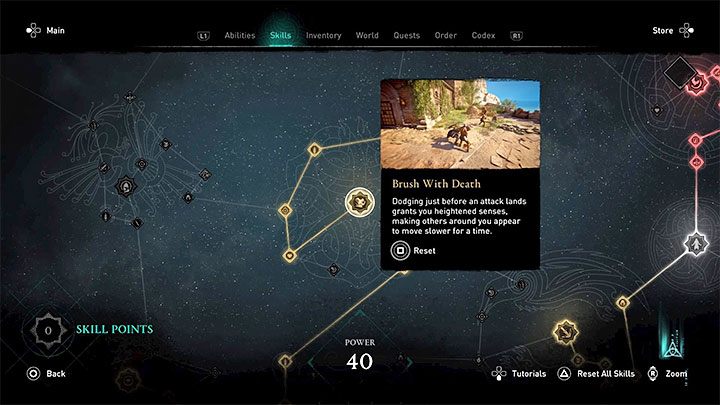 You can defend yourself against enemy attacks in several different ways. Dodges and rolls are definitely the most useful. In most situations, dodges (press the button once) should be enough to save Eivor from receiving damage. The rolls (hold the key) are useful in situations where the opponent will use a stronger long-range attack and you want to avoid it.

Brush With Death ability is associated with dodges. It can slow time automatically if you avoid an attack at the last possible moment. It is a great technique mainly for fighting bosses. After activating the slow-motion, you can interrupt your opponent's attack and go into the offensive (preferably by using a strong attack). 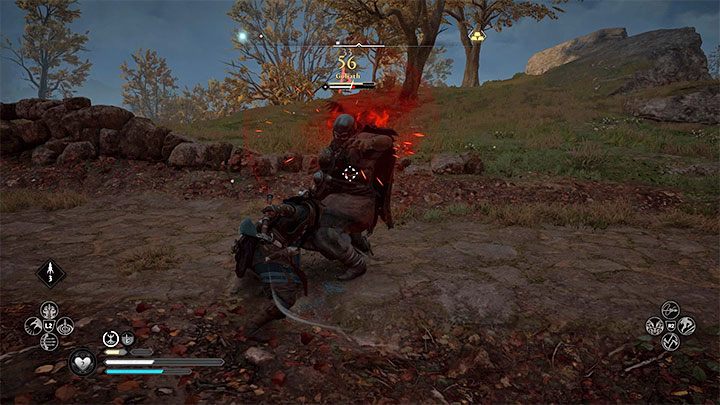 Other effective defense techniques are blocking and parrying attacks. The latter is definitely more interesting, although it requires perfect timing – the block button must be pressed (not held!) when the opponent's attack is about to reach Eivor. You have to practice this move a lot – if you miss, the hero can be hit.

Successful parry can knock your opponent out of balance and allow you to counterattack. The important information, however, is that you can't parry or block the red attacks. The only thing you can do is to dodge (or preferably a roll if the red attack has a long reach). 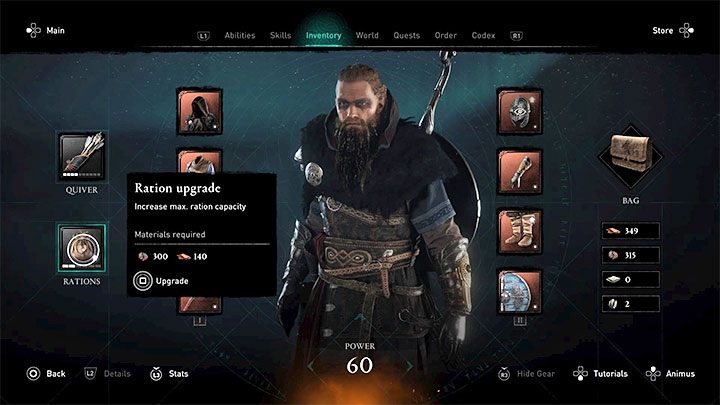 Try to always have as many rations as possible. This will allow you to heal Eivor's wounds. This is important because by default the health bar cannot regenerate itself. After using up all the rations, you can either escape or look around for mushrooms/bushes to quickly heal yourself.

More information about restoring Eivor to full health can be found on the Treatment page in the FAQ chapter. 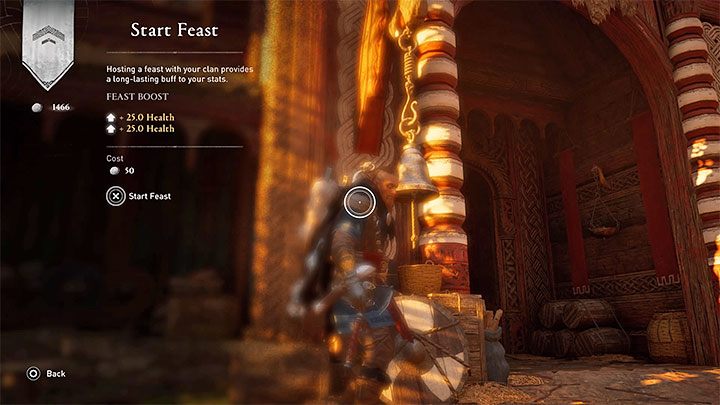 In AC Valhalla, you can also prepare for more difficult fights by holding feasts in the settlement. Eivor can thus receive a 3-hour buff/bonus to statistics, e.g. longer health or stamina bars. This topic is discussed in more detail in the Settlement chapter. 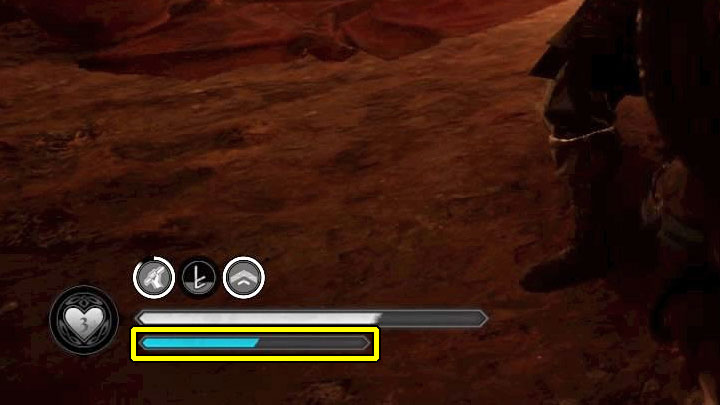 Try to observe your stamina bar located under Eivor's health bar. If you run out of stamina, you won't be able to dodge or block for a limited time. This can get you into serious trouble, especially if it is a fight against a boss and they are about to use their strongest attacks.

You deplete stamina by doing rolls, blocks, and when you miss attacks. Stamina can regenerate itself. However, it will take much longer if you have completely depleted the bar. Another way to restore it is to attack enemies with light attacks – keep using them until you have recovered enough stamina. 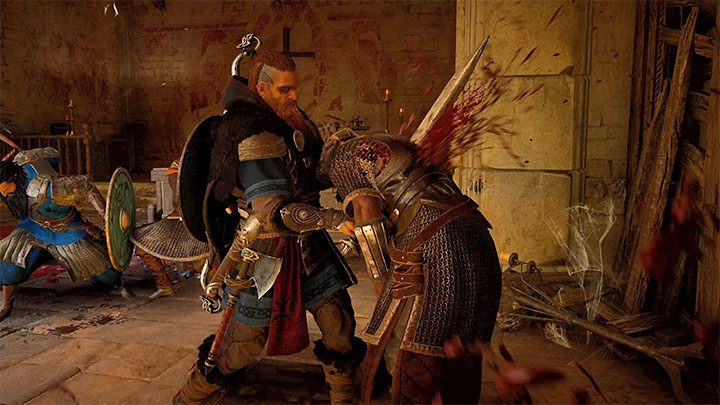 As for enemies, their stamina is represented by the defense bar above their heads. The easiest way to get rid of them is to parry their attacks – they are able to knock your opponents out of balance. An opponent who has lost the whole defense bar, or one of the slots of a longer defense bar, will be stunned temporarily. You can use this opportunity to perform a strong stun attack/execution – their basic versions are activated by pressing the right analog stick when you get close to a stunned opponent. 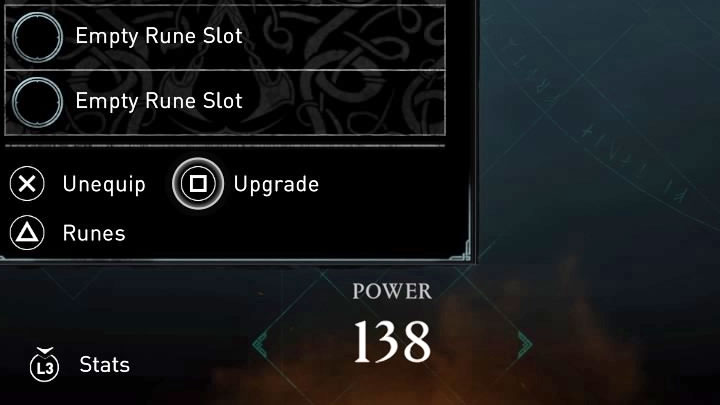 Eivor's effectiveness in eliminating opponents is influenced not only by how well you are controlling the character but also by how well they are developed. This topic can be divided into three main groups.

The most important thing is Eivor's Power – having a high power level lets you visit regions with higher suggested power level and face opponents. You increase power by spending skill points in the skills tree. For more information, see Suggested power - what does it mean? page. 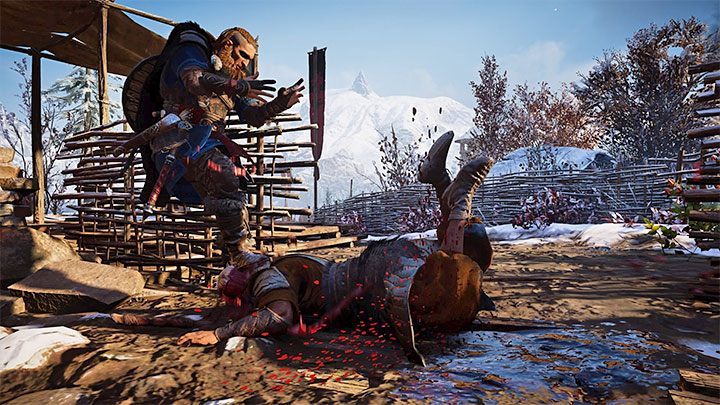 These skill points allow you to buy new skills from the skill tree. These can be new special attacks as well as passive buffs, which allow, for example, to inflict more ranged damage or extend Eivor's HP.

We have compiled the skills recommended by us on a separate page Best main skills. Among the skills that can be purchased almost at the very beginning of the game, the most useful are Backstab (attacks from behind deal more damage), and Stomp (finish koncked-down enemies). 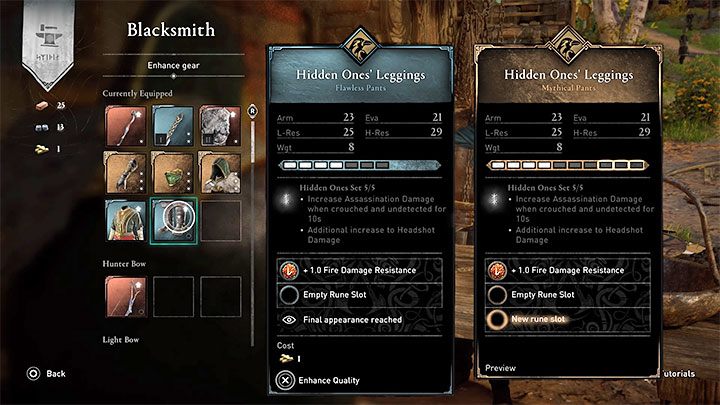 The last group is the improvement of the equipment, which enhances our weapons and infuses them with additional properties. In addition to the standard improvements purchased with common crafting materials, it's also worthwhile to go to blacksmith Gunnar, who will be able to improve your gear. This is done by giving him the right ingots - higher quality equipment can be improved more times and can accept more runes that provide further bonuses. These topics are discussed in more detail on the pages of Ingots - how to get? and Runes - how to use?

In addition to improving items, try to use armor elements from matching sets. This will guarantee even more bonuses to the statistics. 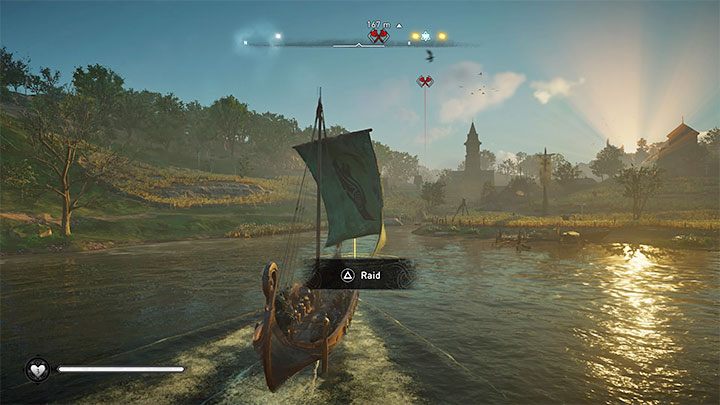 In Assassin's Creed Valhalla, you can distinguish two distinguishable types of combat. The first of them are raids, i.e. attacks on locations marked on the world map. In each of these locations, you can play a big battle. Remember, however, that the main purpose of each raid is to steal unique crafting materials, which are stored in large containers and which can later be used to expand Ravensthorpe.

You don't have to always get rid all the enemies inside the abbey. You just need to reach the rations (marked with barrel icons). This will allow you to complete the raid sooner. 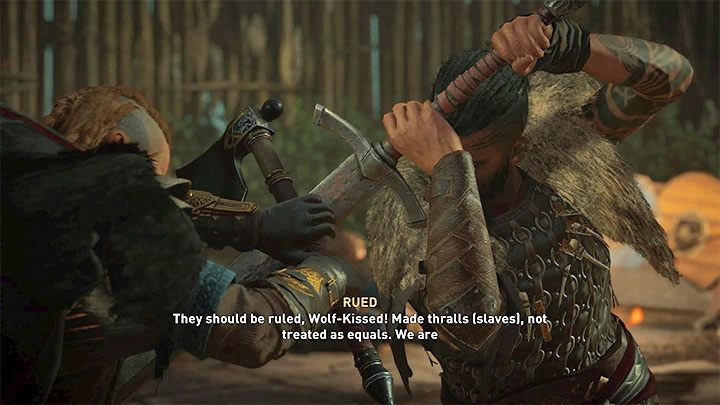 The second unique category are duels with bosses and mini-bosses – the latter cattegory includes zealots (strong mercenaries), Daughters of Lerion and Legendary Animals. Each boss has lots of HP and strong armors as well as unique attacks and skills.

Before each duel, make sure that the boss' power level does not significantly exceed Eivor's power level, because you may have huge problems with winning. Also, stock-up on rations and adrenaline. All the most difficult battles of the game are listed in the chapter Bosses.