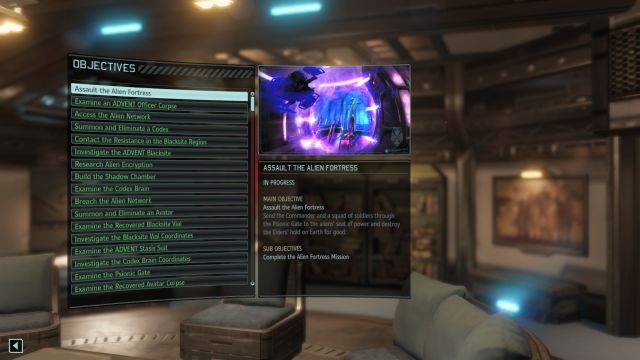 Completed missions can be checked from the menu located on the bottom of the screen.

Story missions, those which must be completed in order to push the story forward work in quite a peculiar way in XCOM 2. There's no real route here, requiring you to complete them in a strict order (aside from the few last missions) - often you will have at least two missions available at the same time, which don't really interact with each other in any way. It means that missions will be unlocked in a semi-random way, probably differing from the order proposed in this chapter.

Note: your current objectives can be checked on the left side of the screen, and places in which you can complete them (aside from those requiring you to complete a specific research, or to build a facility) are always marked on the map - you just have to click on the flashing icon (while on the world map) located on the bottom of the screen, which will transfer you to the destination.

Main objective: Contact the Resistance in the Blacksite Region

Your task is to research the "Resistance Communications" technology and then initiate contact with the only available at the moment resistance cell, which will unlock the next mission.

A new location will appear on the map, allowing you to initiate the mission. Your task here is to reach the facility of the enemy, inside of which you will find the vial (ADVENT Blacksite Vial) that must be collected (by activating the marked terminal). Afterwards you just have to call in the Skyranger and evacuate your units.

To be able to complete this mission, you must first defeat a specific enemy (ADVENT Officer) to acquire his corpse. When this happens, you must start and complete the "ADVENT Officer Autopsy" research, after which the mission will be done.

A mission similar to the one described above, the only difference being the type of research you must complete - in this case the "Alien Encryption".

Sub objective: Complete the Skulljack Project in the Proving Ground

First things first, you must construct a new facility - Proving Ground. Afterwards, you must start and compete the project available via the newly constructed facility - "Skulljack". When it's done, construct the item you've just researched and equip it to one of your soldiers. Now you must send your squad (with the soldier wielding the Skulljack) on a mission and use the new ability (Skulljack) which should now be on the action bar on one of the enemy ADVENT Officers.

Summon and Eliminate a Codex

This mission is closely related to the one described above. As soon as you use the Skulljack on an enemy officer, a new enemy will appear on the battleground - the Codex. You must now defeat the new alien to finish the mission.

To complete it, you must construct a new facility, the Shadow Chamber, which is required to complete a small number of story missions.

To be able to complete this mission, you must first construct the Shadow Chamber facility. Afterwards, you must order a new research project, called the "Blacksite Vial Shadow Project", which will complete the mission and unlock the next one.

After completing the "Examine the recovered Blacksite Vial" mission, a new icon will appear on the map. You must complete a relatively easy task, requiring you to storm the alien facility, just like you did during the "Investigate the ADVENT Blacksite" one.

To complete this quest, you must acquire the Codex Brain, which can be done by defeating one of the enemies - the Codex. After getting your hands on the item, you must complete two projects in the Shadow Chamber facility - first the "Codex Brain", and afterwards the "Encrypted Codex Data". Afterwards the mission will be done.

After completing the "Examine the Codex Brain" mission, a new icon will appear on the map. You will have to assault another alien facility, similarly to the two previous missions ("Investigate the Blacksite Vial Coordinates" and "Investigate the ADVENT Blacksite"). During the mission you will acquire an item (Psionic Gate) that will be required for the next mission.

Sub objective: Use the Skulljack on a Codex

The mission can be done at any time when your soldiers are on the battlefield. You just have to use the Skulljack item on one of the Codex enemies. You should prepare for the task, as the Avatar is the most powerful enemy in the game and can easily wipe out your party if they are not prepared.

A good tactic is to surround the Codex with your whole team (it can be done by stunning the Codex by using the Stasis ability of the Psi Operative), set most of your team in the Overwatch and use the Skulljack on the Codex. As soon as the Avatar appears he will try to get away into cover, activating Overwatch shots, which should be enough to eliminate the enemy.

Summon and Eliminate an Avatar

The mission is closely connected to the one described above ("Breach the Alien Network") and requires you to eliminate the Avatar.

Another mission requiring you to assault an alien facility. However, it differs slightly from the ones you've done in the past, as you will be facing an absurd amount of enemies here, in almost every form possible (aside from the Avatar) - Sectopods and Andromedons included.

After reaching the facility, enter the specified room, activate the marked terminal and pick up the prototype item. Afterwards, you just have to call in the Skyranger and evacuate your troops with the acquired item.

To complete this mission, you must first acquire the prototype from the "Investigate the ADVENT Forge" mission and then finish the Shadow Chamber facility project - "Stasis Suit".

A relatively easy mission, requiring you to assault the enemy communication tower. Additionally, the missions is also one of the most unique ones, as it allows you to purchase additional, randomly generated bonuses. Out of the four available, two will always be the same - the possibility to take an extra soldier on the mission and concealment for each of your soldiers individually.

You should purchase all the bonuses, which, unfortunately, requires quite a sum of Intel (about 170). It is, however, well worth the price, as you can only bring 3 operatives on the mission and every additional help counts.

You should send a team consisting of a pair of Psi Operatives and a Specialist - the fourth one (provided that you've purchased the bonus) is optional. Psi Operatives will allow you to seize control over two Andromedons - those can be used as tanks, soaking up all the damage coming from the aliens. The Specialist can be used to hack devices, like the Turret, which you will stumble upon here.

Your main task is to get to the other side of the facility and hack the terminal located there, after which the mission will be automatically completed.

The mission becomes available as soon as you complete all the previous tasks. A new icon will appear on the map, allowing you to send your team on the mission. Note that this is the last mission in the game and completing it will finish the game itself - before sending your team make sure that you've equipped them with the best possible gear, weapon upgrades and Personal Combat Sims.

As you've probably guessed, this mission will be the longest one in the game, and during it you will eliminate dozens of enemies (a lot more than the information from the Shadow Chamber indicates). You should take at least two fully developed Psi Operatives on this mission.

The reason for that is quite simple - the ability to seize control over two enemy units, which can be used as meat shields, taking damage instead of your soldiers. You should Mind Control a Gatekeeper and an Andromedon, which have the highest defensive stats from all the non-mechanized units. Remember that you can heal them with your Specialist, if needed.

The mission is divided into two stages. During the first one you will have to storm through dozens of alien units while venturing further and further into the enemy territory. If possible, try to conserve as many grenades and / or heavy weapons as possible, as the end of the mission takes part in an arena flooded with aliens.

The arena-like room is where the main objective becomes active - you need to defeat 3 Avatars. What makes the mission difficult are the 4 portals scattered around the room (2 on each side), from which a group of enemies will emerge, almost each round, for the duration of the encounter. Various types of enemies will come through the portal, such as: Faceless, Viper, Muton, Codex, Sectoid, Archon. To make this encounter a little easier you should stick your team together and send the mind controlled enemies to the frontlines - enemies will focus fire on them, while your soldiers will eliminate the aliens.

The time is definitely against you here - the longer the encounter takes, the more enemies will come through the portals. As soon as you complete the main objective and all 3 Avatars will be no more, the mission will be completed, activating a series of cutscenes and the game will end.