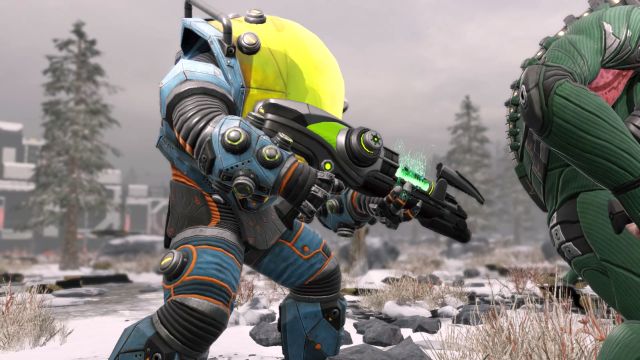 One of the heaviest armored enemies in the game, a foe which must be eliminated as soon as he comes into vision. The thing that makes that task a hard is a vast health pool and even up to 4 points of armor - you should either throw a couple of grenades at the enemy, or use special ammo, such as the A.P. Rounds or Bluescreen Rounds. Additionally, the enemy is immune to the EMP Grenades / Bombs, even though he clearly is a mechanized unit.

The main reason because of which you want to get rid of him as quickly as possible is his passive ability, allowing him to spill acid as he moves around the battlefield. Running into a group of soldiers can potentially cause a burning acid effect to all of them. If he happens to be in the range of a few tightly grouped soldiers, he will throw an acid bomb at them, capable of dealing high damage (up to 7 points) and shredding 3 points of armor, making any armor they were wearing useless.

His offensive capabilities are top-notch as well. His plasma-like cannon can deal up to 10 points of damage, similarly to his powerful melee attack, which can additionally blow up a huge portion of building behind his intended target.

The enemy has a special passive ability. After dying, the Andromedon will restart with about half of the health he had in his "original" form (but this time lacking any armor) and focusing on melee attacks only. That is precisely the reason why you should eliminate the enemy from a distance, so that the "rebooted" form won't be able to deal any damage to your soldiers.