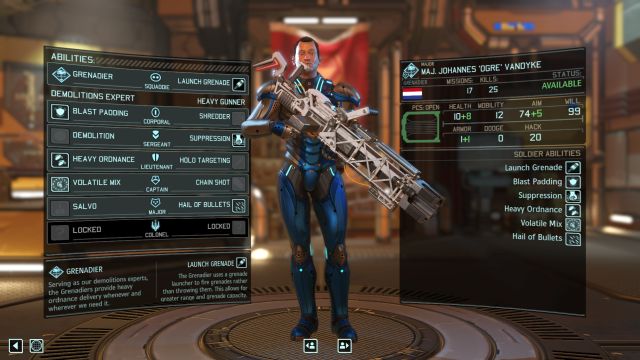 The Grenadier differs from the counterpart of the first XCOM in one aspect - the soldier uses a grenade launcher instead of a rocket launcher. It allows the Grenadier to launch deadly projectiles over vast distances, and a number of abilities greatly increase their effectiveness (by increasing the blast radius, the amount of carried grenades, or even the damage). They are equipped with heavy machine guns, and because of the grenade launcher they are carrying they can't use a handgun, getting a bonus grenade in return.

This class starts with the Launch Grenade ability, allowing it to launch grenades over vast distances.

Grenadier abilities allow the soldier to cause havoc on the battlefield, flush enemies from behind covers (or get rid of covers) and deal damage to several targets at once. You should choose the following abilities: