Watch Dogs Legion is the third part of a series of sandbox action games from Ubisoft studios. As with previous parts, the gameplay is centered around hacking. This time, however, we are not playing with a single character, but get to lead an entire group whose members are recruited from a pool of independent characters. Below you will find all the information known so far about the game.

The whole guide was divided into three parts. In the first, you will find information about the basic gameplay mechanics like the interface, combat or world exploration. We have also prepared an extensive FAQ section, where you will find answers to questions that may arise during the adventure. The second segment is the walkthrough, which contains a detailed description of all the tasks available in the game, along with maps of individual districts of London and achievements that you can unlock. The third part is the annex, which lists the hardware requirements and controls on each platform.

Game modes – which ones are available?

Watch Dogs Legion has two gameplay modes. The first is the single player. The second is a co-op for up to four people, during which you complete missions prepared specifically for the needs of the group.

Permadeath – does the game have it?

Yes, but it's optional and you can turn it off. Enabling it means that every character in the game world dies permanently, and you lose the ability to play it. Additionally, if a character is seriously injured, it will be temporarily unavailable.

How to get a free operator?

You can get a free exclusive operator called "El Rubius OMG". This is a popular content creator from Spain. If you want to unlock this character, go here, enter WDSL-ELRU-BIUS-9999 and log in to your Ubisoft account. After logging in, the operator will be available in the game. The operator has a unique look, and his special perks are paintball guns and calling a drone. Even if you won't use him during the missions, you will unlock his clothes for other operators.

Changes from previous parts of the series

Watch Dogs Legion introduces several changes in relation to the previous series. The first and most important of them is lack of the main character. Instead of one protagonist, you have a group of people of your choice, whom you recruit from among the NPCs inhabiting the city.

The realities of production have also changed. For the first time in the history of the series, the action doesn't take place in the United States. Instead, you find yourself in an dystopian version of the capital of Great Britain – London.

Do all team members behave the same way?

No. Every character that appears in your team has their own specific behaviors. All cut-scenes vary depending on the person chosen - there are different lines of dialogue, and the character's gestures are different.

In addition, each person you recruit has their own unique day plan, which they follow. On this basis, you can determine where an agent will be staying at a particular time of day.

Can you change the appearance of a character?

Yeah. In London, you can find places that will allow you to change the appearance of DedSec members.

How many endings does the game have?

According to the announcement, the game will have 20 different ending variants.

A computer with the above specification is the minimal setup that allows you to run the game on low graphics in 1080p. For more information on the Watch Dogs Legion hardware requirements, see the separate guide page.

Watch Dogs Legion is sold in four editions. Below is a description of the contents of each.

In this edition you will find only a copy of the game. It is priced at $59.99 (PC, PS4, Xbox One). It is also worth remembering that if you buy a box version, you will find a code for digital activation inside instead of the disc. 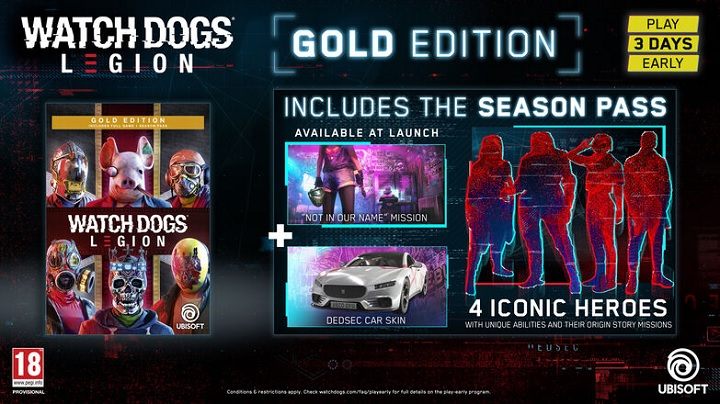 In addition to the game, this edition also includes a season pass, 4 "iconic" characters, a Not in our name mission, and a DedSec skin for a car. This version will cost you $109.99 regardless of the platform. 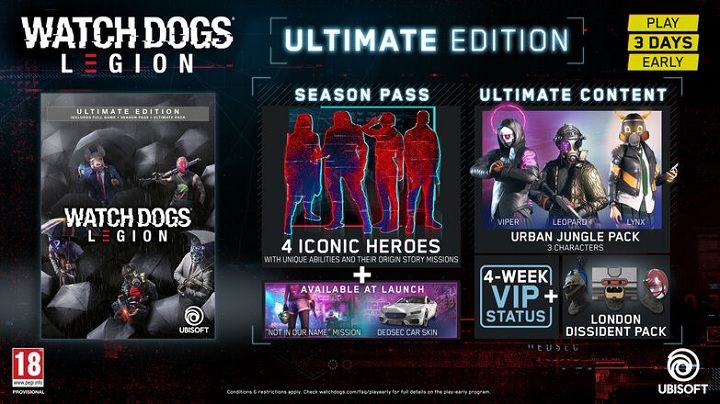 In this case, you will receive the Urban Jungle Pack, which includes three additional characters, VIP status (for four weeks), and the London Dissident Pack, which is a package of cosmetic items. Finally, you get all of the Gold Edition content. For this version you have to pay $119.99. 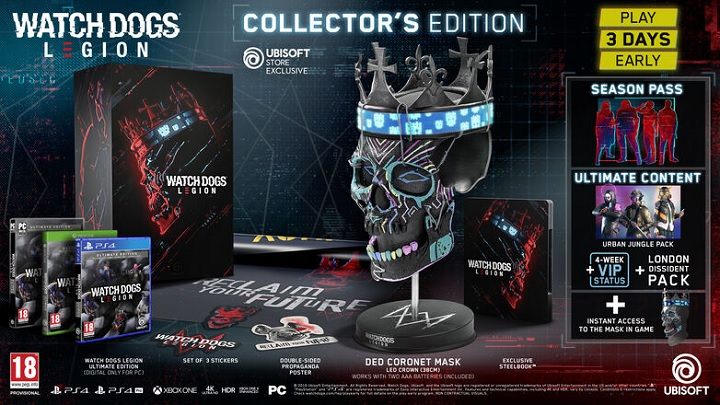 It is the most expensive edition of the game. You will pay $189.99 for it. It contains a steelbook, a two-sided propaganda poster, a backlit Ded Coronet mask, a set of three stickers, and the contents of The Ultimate Edition. 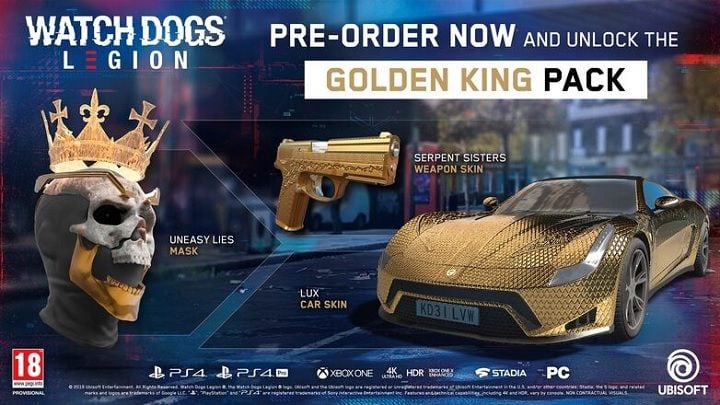 In addition, if purchased in pre-order, you can count on additional content in the form of a digital Golden King pack, which includes gold skins for weapons and cars and a special mask for the hero. You will also be able to play the title 3 days before the official release.

This article is a compendium of knowledge about Watch Dogs Legion – the third part of the popular series of open-world action games, supervised by Ubisoft. The text will be updated as new interesting information and materials appear.