In this chapter of our game guide to Valorant you can find important information about the ranked mode, how to unlock it, what ranks can be acquired and how to advance to a higher rank.

In most FPS games and tactical shooters, there is a ranked mode in addition to the usual gameplay mode, in which players fight to gain the highest rank and often acquire additional unique rewards. Valorant's ranked mode was implemented to the game in the 1.02 update, shortly after the official release of the title. In this chapter of our guide, you can learn more about Ranked mode available in Valorant.

The Valorant ranked mode is based on the same principles as the standard mode. Players will compete in 5-man teams on one of 3 currently available maps: Bind, Haven, Split and Ascent. The game continues until one of the teams wins 13 rounds. Access to the ranked mode in Valorant can be unlocked only after 20 standard games have been played. Player gets a specific rank based on the results achieved in non-ranked games. By playing matches in ranked mode, player can advance to the next rank if he or she has enough skill and satisfying results. However, player's rank can be reduced and lowered if the results are not satisfying enough.

Valorant Ranked Mode - how can I get a higher rank?

It is known from official sources that in ranked mode, winning is the most important factor to advance your rank, but it is not the only significant aspect that affects your ranking progress in Valorant. If you show off your skills during the whole game, your efforts will be appreciated and you can be able to advance much faster. 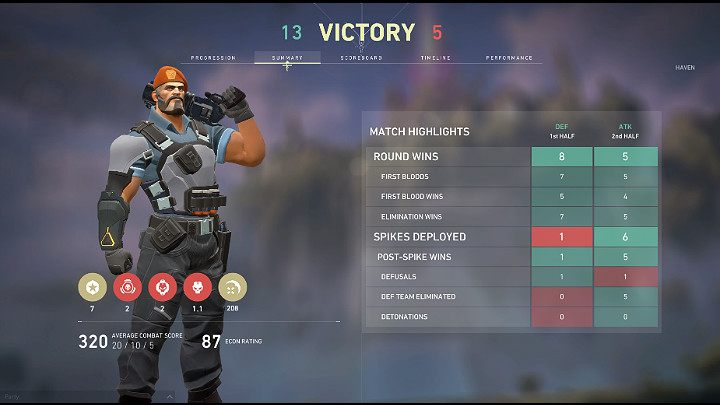 It is worth noting here that a player's personal performance will be of particular importance when assessing his skill level before being assigned to a particular rank. For that reason, you always have to give your best and try to perform as well as you can - especially when you are playing the unrated matches which determine your rank. Interestingly, the ranking system implemented in the Valorant will be able to measure how bad a defeat was and on this basis allocate a certain number of ranking points.

The Valorant ranked mode is able to select players for each team in such a way as to ensure the most balanced gameplay as possible. It is also worth noting that the ranking system in Valorant is going to be able to detect "smurfing" players who have already reached a high or even very high level and deliberately create a new account to play against players representing a lower level of skill. With this solution, the player can be sure to play against players who display similar skills.