In Valorant, players can play as one of 10 available characters, which are divided into specific categories: Controller, Initiator, Duelist, and Sentinel. Because of this, some characters perform better on offense and possess deadly skills, while others are more defensive and able to make the game more difficult for opponents. This chapter of the guide describes the characters available in Valorant and what are the best offensive and defensive heroes.

There are currently 10 characters available in Valorant, and each has certain abilities. Some of the skills are offensive and inflict massive damage, while others are areal and cause injuries spread over time. In Valorant, there are also characters with purely defensive skills, and they are the ones who are most valuable when it comes to defending Spike locations. It is important to know what the best defensive characters are, which is why we have prepared a special list of defensive agents in Valorant. We have divided them into tiers - with S being the best character class and C the worst. The skills that are most useful when defending Spikes are taken into account when assessing the character.

Among the defensive characters available in Valorant, there are Sage and Cypher. The former has everything that is needed for effective defense - the ability to block passages and slow enemies down, heal, and even the ability to resurrect a dead ally! The second character included in the S-Class is Cypher. His espionage skills allow him to acquire a great deal of information that can be used during a match. By attaching a spy camera at one point Cypher can easily move to another point on the map and keep an eye on the previous location. 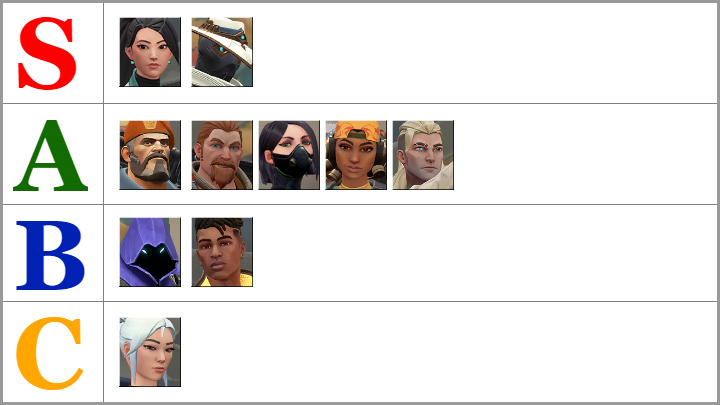 Class A includes Brimstone, Breach, Viper, Raze, and Sova. Class A characters are those who have not only defensive skills but can also deal a lot of damage. You could say Class A characters are the most versatile ones in the game. Class B includes Phoenix and Omen, followed by Jett, who has nothing to offer in defense other than a maximum of three smokescreens that last only a short while.

There are currently 10 characters available in Valorant, and each has certain abilities. Some of the skills are typically offensive and instantly inflict massive damage, while others operate in a certain area, and cause injuries spread over time, reduce a character's visibility, etc.. In Valorant, there are characters who have the skills that are most valuable when you have to break through to the Spike location. It is important to know what the best offensive characters are, which is why we have prepared a special list of offensive characters in Valorant, which we have divided into tiers - with S being the best character class and C the worst. The skills that are most useful when attacking a Spike location e are taken into account when assessing the character.

The S-Class featured characters who, using their skills, can help the team break through to Spike's point of entry and activate the charge. Brimstone, using his smoke grenades, can completely deprive opponents of vision, and his Ultimate skill is an extremely deadly weapon. Phoenix has two fast blind grenades that can be thrown from a safe position. What's more, this character has fire shields and can heal himself! Raze is a truly explosive character who possesses explosive skills to quickly eliminate a target. Breach is an irreplaceable character in the attack on Spike's point due to his ability to control other characters even through walls - blindinging, stunning, dropping. 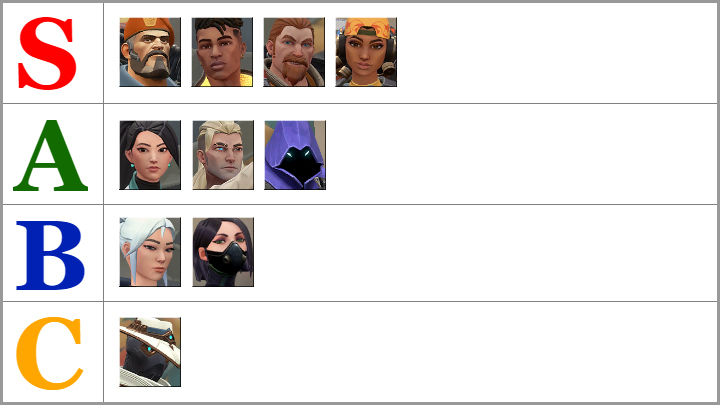 Class A features 3 characters: Sage, Sova and Omen. Sage is a defensive character who can also be useful during an attack to make it difficult for opponents to defend a point of charge. Sova is an invaluable scout. Thanks to his skill, he can quickly get the information the team needs. Omen can effectively limit the opponent's visibility, as well as teleport to any location on the map. The B class includes Jett and Viper, followed by strictly defensive Cypher.