In this chapter you will learn about the characteristics of all sidearms available in Valorant. The description of each weapon also has tips that can be useful during gameplay. In addition, each weapon has an example of its spread along with advice on how to control its recoil.

In Valorant, sidearm pistols belong to a group of primary or secondary weapons. Pistols perform best at short and medium distance. Due to low damage and poor armor penetration (the exception here is the Sheriff), always aim at the head to cause as much damage as possible. When you face an armored opponent, you will have to fire 2 to 5 rounds, depending on the weapon, at the body to kill them. 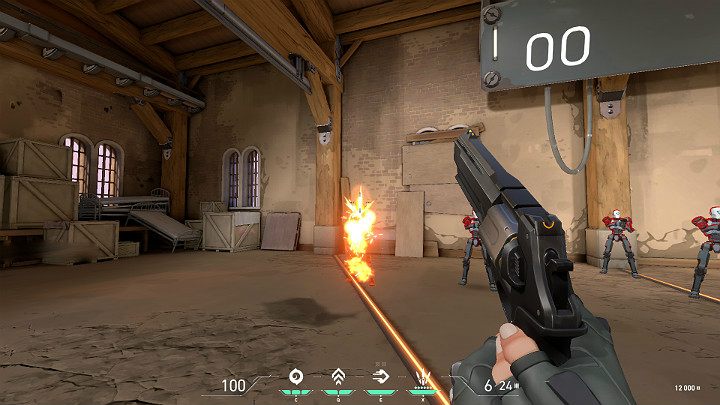 It is also worth mentioning that sidearms have a quite good accuracy when moving or jumping, provided you fire single rounds.

The Classic pistol is the primary weapon of every character in Valorant. You start every new match or pistol round with this pistol (if you don't own another gun - you get this one for free). The Classic has 12 rounds in its magazine and is a semi-automatic weapon so its fire rate depends on how fast you can press the LMB. Despite being the primary weapon, you will need only 2 headshots to eliminate the target (each inflicts 76 damage, provided that the target remains within the effective range of the weapon). If you aim at the body, you will have to shoot at least 4 rounds. 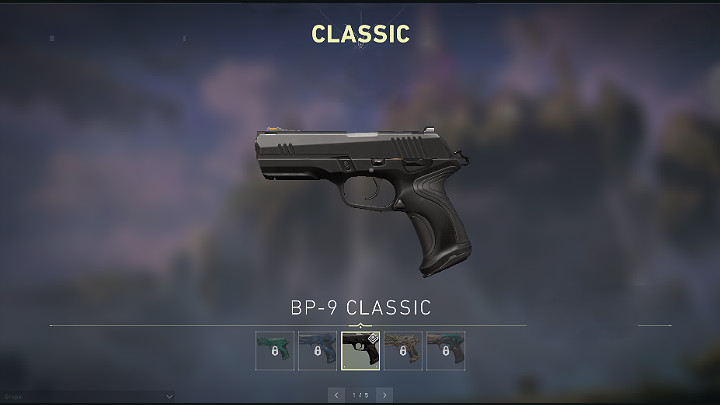 The Classic also has an alternate firing mode (RMB). This mode shoots 3 rounds simultaneously, but their spread is random. Despite this, the alternative firing mode works very well at close range. When shooting from a long distance, shoot single bullets. 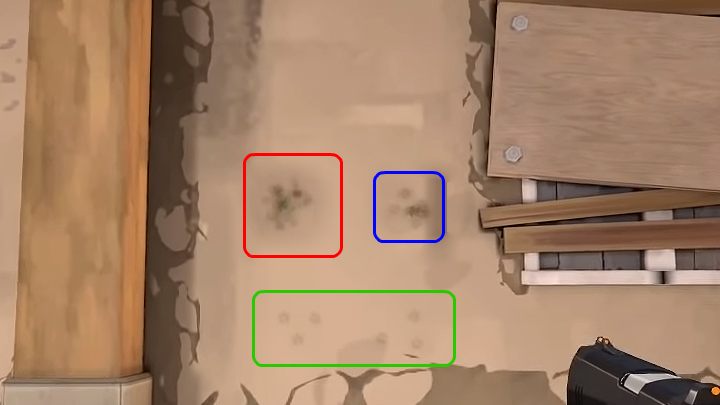 The image above shows an example of the Classic's spread, one of the weapons in Valorant. The test was conducted from medium range (marked red), close range (marked blue), and from close range while using the alternate mode (marked green). As you can see, the Classic is a very accurate weapon at both close and medium range. When it comes to alternative fire, the spread is random - sometimes it resembles a triangle, other times a vertical line, but it is also possible to have every bullet hit the target.

Shorty is another sidearm - the weapon is quite original in that it resembles a miniature shotgun. Shorty can hold 2 rounds in the chamber and is a semi-automatic weapon, but it fires extremely quickly. Shorty is most effective at close distances - you can eliminate your opponent with a single headshot. 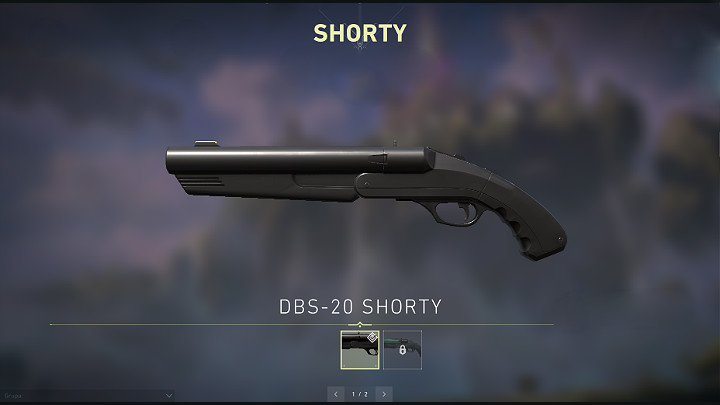 Shorty is best suited in situations where the player can ambush the opponent around a corner or behind any of the terrain obstacles. When they spot the target, they can fire two shots at close range - this attack will always be fatal. It is also worth noting that Shorty doesn't have an alternate fire mode. 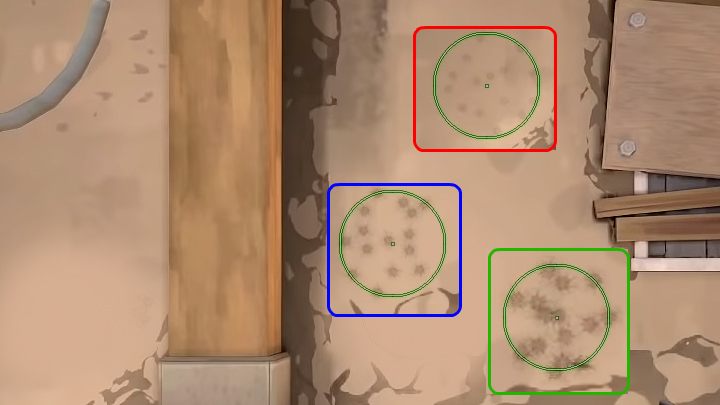 The image above shows an example of the Shorty's spread, one of the weapons in Valorant. The test was conducted from medium range (marked red), close range (marked blue), and from close range while using the alternate mode (marked green). As you can see, Shorty doesn't work well from distance, but the closer to the target, the more concentrated the projectiles. If you approach the target directly, you will be able to fire all bullets at it.

Frenzy is the only fully automatic handgun available in Valorant. It has 13 rounds in the magazine and can cause very serious damage. With this weapon, you will need only 2 headshots to eliminate the target (each deals 76 damage within the weapon's effective range). If you aim at the body of an unarmored opponent, you will have to shoot at least 4 bullets. 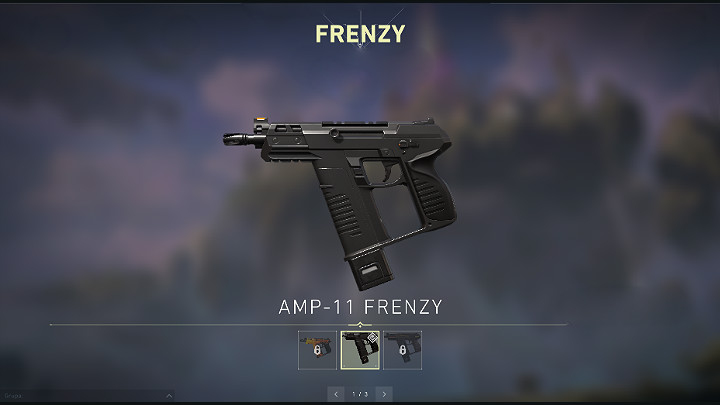 Although Frenzy is a fully automatic pistol, it doesn't have an additional ADS firing mode like the other automatic weapons. However, when using this weapon, it is possible to use the single-shot technique (single LMB clicks) or shoot short bursts (3-4 bullets per series). 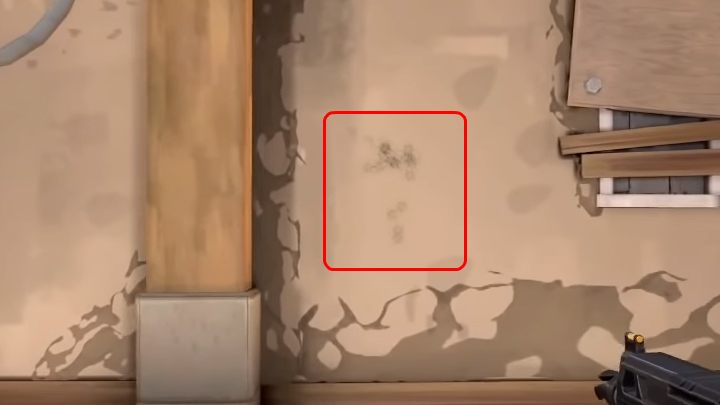 The image above shows an example of the Frenzy's spread, one of the weapons in Valorant. The test was conducted from a medium distance - the closer the target, the smaller the bullet spread. As you can see, the first two rounds end up very close to the target, and then the weapon starts to pull up - two projectiles hit slightly higher, the next much higher. Later, the gun moves slightly to the left. When firing Frenzy, you must control its recoil by pulling the mouse slightly down and slightly to the right.

Ghost is another semi-automatic handgun available in Valorant. What distinguishes it from the competition is that it holds 15 rounds, has a silencer and does considerable damage. A single headshot to an unarmored target is enough to kill it (105 damage within the weapon's effective range). You will have to fire at least four rounds to the body. 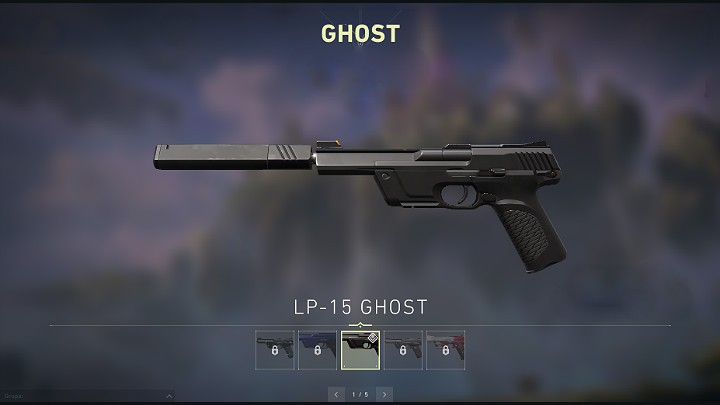 Ghost is without a doubt the most accurate pistol in the game - it can be successfully used at longer distances but you have to remember that it will deal less damage. When shooting from a long distance, the best technique is to shoot up to 2 bullets per series. It should also be noted that Ghost doesn't have an alternate firing mode. 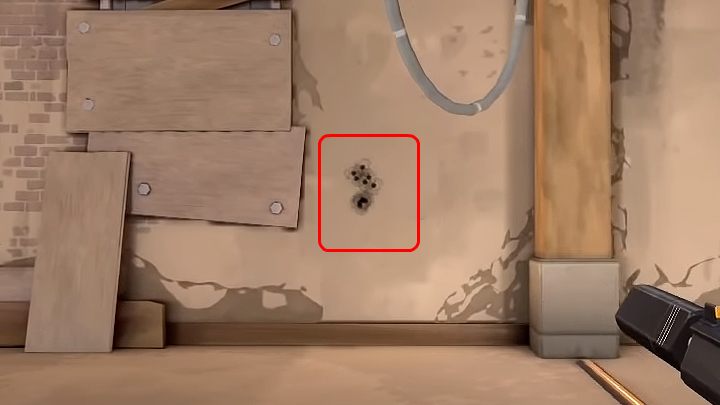 The image above shows an example of the Ghost's spread, one of the weapons in Valorant. The test was conducted from a medium distance - the closer to the target, the better the accuracy. The first three bullets fired from the Ghost end up right at the point, and the next must be counteracted by moving the mouse gently downward.

Sheriff is the last pistol available in Valorant. It has six rounds in the chamber and inflicts massive damage. To eliminate a target, you only need one headshot - the weapon deals 160 damage within its effective range! If you hit the body, you will have to shoot 2 rounds - each dealing 55 damage. 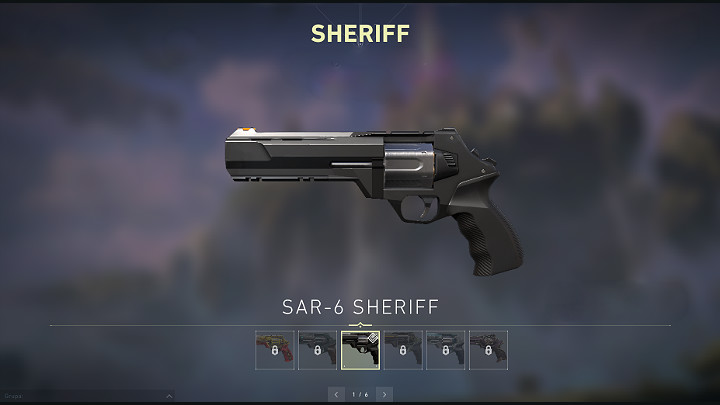 Sheriff is also the only pistol that has high walls penetration. This means you can take out a target behind a door or wall with a single bullet - provided you hit the head. When shooting from a distance, it is best to use the single-shot technique. 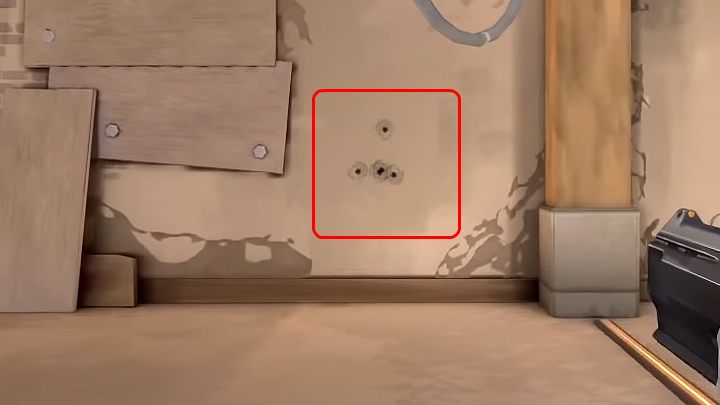 The image above shows an example of the Sheriff's spread, one of the weapons in Valorant. The test was conducted from a medium distance - the closer the target, the smaller the bullet spread. While the first two rounds fired from Sheriff hit the target, the next ones have a completely random spread. In the image above, the third round flew to the left, the fourth to the right, and the fifth upward. It can happen that the Sheriff's bullet spread will be completely differently - for example, the gun will start moving upwards and then left or right. When firing this weapon, it is best to fire single shots.