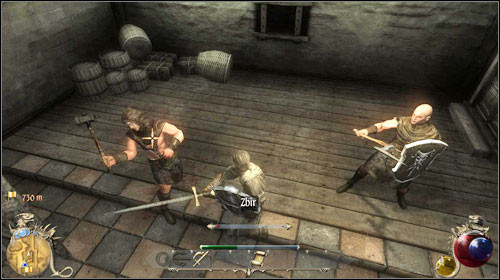 You will meet Tongue right after leaving the inn, after completing [The Elimination Job].

Follow the man to learn more about the mysterious murders. Go inside the house and behind the gate - it'll get locked.

You will unlock [Captain].

In order to leave the locked room, you have to deal with two thugs to present your skills. Head to Zask (M20:14). You will have to earn his trust before you learn something more.

You will unlock [Dragon Carapace].

After completing another series of missions: [Imperial Delivery], [A Friend in Need], [The Third Man], [Maliel's Tear], [The Transaction].

Once Reesa tells you the whole truth, you can refuse helping her, head to the commander officer (M20:16) and explain who's behind the mysterious murders. In return you will receive 5000 auras. 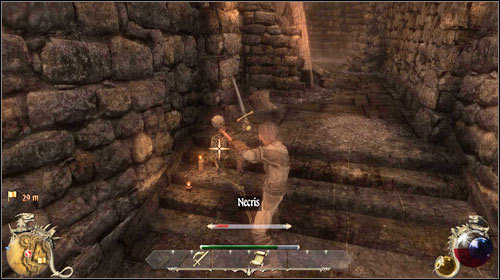 The local merchant wants you to get five dragon scales, which he needs to forge a new item. You will also receive a key to the stash in which they're hidden. Head to [Hatmandor Region] (M12:4) and then to [Dragon Slayers' Den]. After going inside (M15:1), head to the marked intersection. You have to find five dragon scales (M15:2). There will be giant scorpions and Necrises waiting for you in the cave. In case of the large room in the lower part of the map, you will find two scales in the chest.

After leaving the hideout, in front of the cave you will meet Sulaiman (M12:22), who will offer you 2500 auras for all five scales.

If you decide to sell the scales, you won't receive any more mission from Zask!

Return to the merchant (M20:14) and give him back the booty. You will receive 450 auras and a sword.

You will unlock [Imperial Delivery].