This guide to Two Worlds II contains a detailed description of all the quests available in the game, together with all the possible solutions, endings and their consequences.

In the first part of the guide, I've included the main quests - description of all the chapters required to successfully completing the game.

The second contains quests connected with particular locations in the game.

The third group are various quests received from various guilds, completing which increases your reputation.

At the end of the guide there are over 50 maps of locations, with particular places and people - described in the guide - marked on them. 10 of them are never before published and not available (even from the game) labyrinths!

Map references have been marked in the following way: (Mx:y), where x indicates the number of the map and y the position on that particular map. 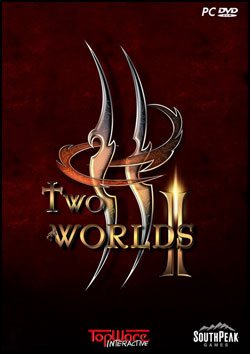 A few years after the fateful events in Part 1 of the "Two Worlds" saga, the power of Gandohar, the Dark Imperator, is at its peak. The joy and relief experienced by the populace of Antaloor when he conquered the proud Orcs was soon brutally stifled by his reign of unbelievable terror. The depths of his evil character were revealed much too fast... and much too cruelly.
Only one warrior with the combined power of two worlds can destroy this spell of evil - and the people yearn for his coming. But... the hero is a prisoner in the city's deepest dungeon, so he'll have to start out on the path to his adventures from this dark and gloomy location. He'll enjoy victories and taste bitter defeats, he'll be betrayed and befriended and he'll be met by mind-boggling mysteries and sudden surprises on his travels.
However, new powers are entering the scene - and they will plunge the player deep into Antaloor's past. One quest will take the hero back to his roots, present him with surprising twists and turns in the game - and transport him into a truly new dimension in the RPG genre.

Gameplay:
"Two Worlds II" offers a perfect symbiosis of the most important RP features - sheer atmosphere and dazzling technology. A complex quest system with an exciting main story that leads you through the world of Antaloor, plus lots of secondary scenarios with their corresponding quest stories ensure that the followers of the main story AND the adventurous souls who love the danger of exploring unknown regions will ALL get their money's worth... and more!
Completely revised AI and Balancing standards, experienced authors, the active combat system and the fabulously intuitive management of magic are all a guarantee of even more game enjoyment for both RPG professionals and those who are new to the genre. Then we have the GRACE engine, especially developed for "Two Worlds II". In combination with the extremely flexible MoCap system, it enables unheard-of freedom of movement when the hero is walking, running, involved in combat and interacting with his environment. "Two Worlds II" is graphically superb, thanks to technological highlights like an unlimited number of dynamic light sources, 24 bit HDR post-processing and Real Eye Adaption.