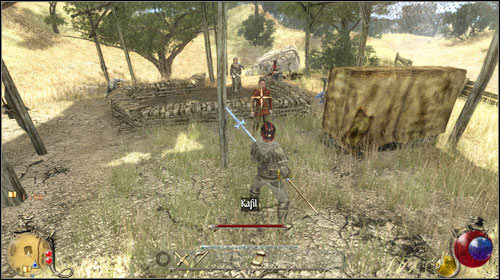 By the path you will meet a man in the middle of building his house. During the conversation he will ask you to recover the spades stolen by the baboons in return for 100 auras.

Head to the marked spot (M11:3) where you will come across a bunch of baboons. Kill them all and return to Kafil (M11:2). It will turn out that the workers were really bandits, who were only pretending to be working and you were sent on a pseudo-mission so that they could steal everything left. You won't receive any reward.

Note that one of the workers has a weapon - attack him. It will turn out that they really are bandits, who were only pretending to be working - they will attack you. Have no mercy for them. Kafil has been forced into lying to you, so that the bandits would have time to rob the place. In reward you will receive 200 auras. 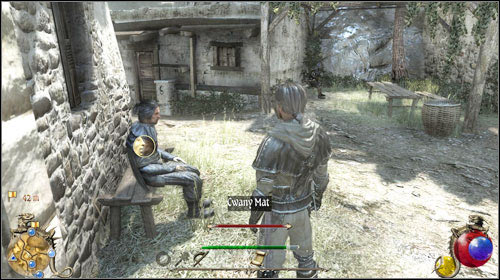 During completing [Desertgate], after talking with Odval the guard (M3:1), when only you return to the village you will meet Smart Mat sitting on a bench. He will offer you a forged pass, thanks to which you will be able to cross the gate. Such a pass costs 500 auras. After paying, follow the man to his house to receive the document. After going inside, you will see that Smart Mat has run through the basement.