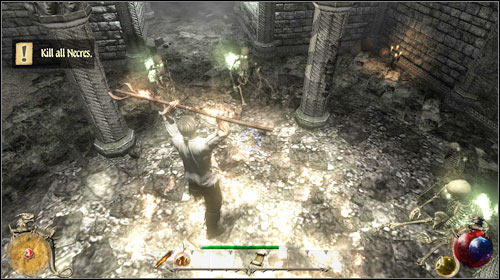 After talking with Dar Pha (M1:4) in the orc camp, go meet the Prophet. You will reach a destroyed bridge, by which you'll talk with Ghortarius (M1:6). After a failed attempt of rebuilding the bridge, you will be moved to [Alsorna - basement - Alsorna basement], where you will undergo a magic training (M2:1). 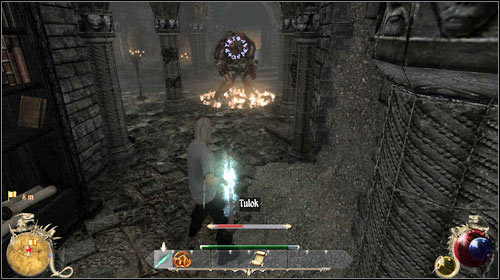 You'll get a staff, thanks to which you can cast spells. Get rid of the few first Skeletons (M2:2) by attacking them with the Fire Bolt and return to the mage. You will learn the Fire Blast spell, useful in case you get surrounded by a big group of enemies. Head to the end of the corridor (M2:3), where you will find a fire circle - it restores mana. Get rid of a few waves of Necrises using your new spell. Head to the teleport (M2:10) - you'll meet Tulok. Pick up the nearby skill book - water magic and the Ice (effect) card. Open your inventory and choose the Fire Blast amulet. Swap the fire card for the ice card and accept. Attack the enemy with the newly created Ice Bolt. 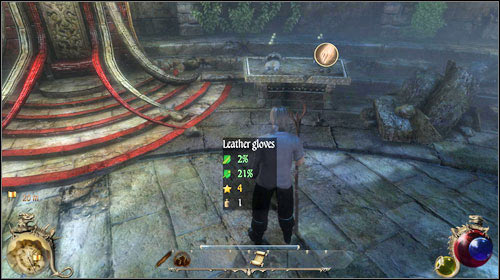 Go meet with Cassara (M1:7). You'll witness how horrible the future may be and begin your attempt to change it. After the cutscene, take the armour set Cassara left you from the table.

You will unlock [Dar Pha].

In order to continue the mission, you have to complete a series of quests: [Dar Pha], [A Place to Stay], [Sokaris]. 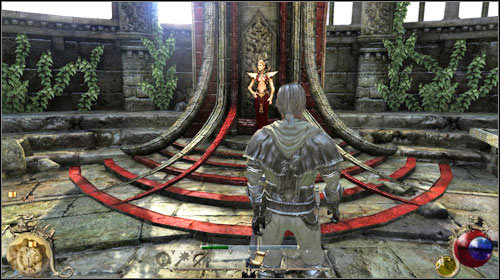 Before you speak with Cassara again (M1:7), you'll come across Ghortarius, who will give you the teleport stone - it allows you to instantly travel to different spots (previously visited teleports and those marked on the map). You have to go to Ghortarius, who will tell you what you should do next - use the teleport stone to move to the mage's room [Alsorna - basement - Inside Alsorna].

You will unlock [Find Ghortarius].

After completing [The Broken Teleport], you'll receive [The Tower of Fangs] from the Prophet - you have to finish all the quests from Chapter I to continue [The Prophet]. 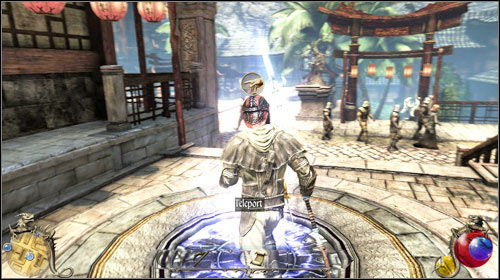 After showing the journal, go to the basement (M1:9) and head to Cassara's room [Alsorna - basement - Inside Alsorna] (M2:7). You will be directed to New Ashos, where you will find information on Gandohar's failed experiment. The location is marked on the map, use the teleport stone.

You will unlock [Gandohar's Trails].

You have to finish Chapter II to meet with the Prophet again.