Trade Quarter is a safe location at all times. Some Salamanders are to be found on the streets, as well as a Kikimore or two. If you are caught during nighttime without the pass allowing to violate the curfew, promise to the guard that you'll kill all the kikimores in exchange for a pass - you'll get it. 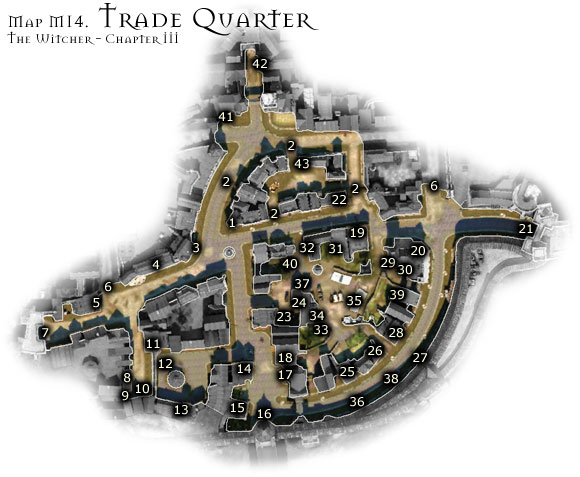 1. Triss' house (two entrances). On the bottom floow there are books: Monstrum or a portrayal of Witchers and Rivian Pogrom. Upstairs there's a book on sorceresses and wizards. Also, one of the teleports is here. You can meditate in here.

5. Night House. A bouncer is guarding the entrance - provoke him to engage him in a fist-fight.

13. New Narakort inn, with an announcement board in front of it. There are numerous contracts to take there: archespores, graveirs, cockatrices, fleders, ghouls, kikimores and wyverns. One of the women tells you about the Basilisk for a pint of beer. Talk to the Waitress a few times and she'll tell you about her problem: give her red woman's gloves to get two flasks of Wives' Tears. If you listen to her story about her grandma, you'll also get a recipe for Wives' Tears.

18. Merchant's house - two entrances here. Hobbs Pankiera is living here - you have to fist-fight him the first time you enter. You'll find Dandelion's Lute. You can also sleep with his daughter if you do the conversation with her right.

23. Swordsman. He can place runestones in your blades, as well as forge swords from meteorite parts. Convince him to work by giving him a valuable stone (sapphire, ruby, diamond).

25. Gambler's den. Two entrances here. You can meet the people there during the night. You can meditate here.

39. Warehouse. You'll get the key from Velerad in Q3.88. Gold Rush. Watch out for Fleders inside. In a chest there's a book The Conjunction of the Spheres.

Hint 30: When previously visited locations play their role in next chapters, we stick to map markers that have meaning in the new chapter itself. New people, new items and new quests, that it.

Hint 31: It's good to check out all the previous locations to find new items in chests and barrels.