Important: The following guide is intended for mature audiences only, due to its content.

Preparation of this guide cost us a lot of work. Thus we'd like to confirm the fact that both witcher's swords are for monsters - with the steel one being intended for those in human flesh. For example the ones that like to point out a strategy guide's flaws and state that it sucks as a result of some minor omissions. Now that we have that clear, please enjoy the adventures of Geralt of Rivia.

Hint 1: Knowing the books the game is based on is not necessary to enjoy it, but it will certainly make you appreciate some details a bit more.

About The Witcher Game Guide & Walkthrough 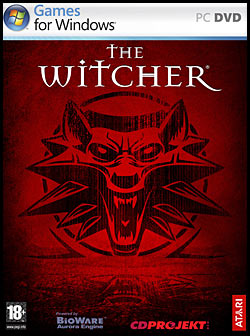 The Witcher represents the pinnacle of storytelling in role-playing games, shattering the line between good and evil with a world where moral ambiguity reigns. In a beautiful, rich game universe created by artists first, technology second, the player becomes his own hero in an epic, action-packed narrative uniquely defined by his actions. Returning to the roots of the role-playing genre with a fresh and modern approach, The Witcher emphasizes story and character development in a vibrant world, while incorporating tactically-deep real-time combat like no game before it.

Immersed in a vivid but harsh fantasy world, the player assumes the role of a white-haired witcher named Geralt, a renowned monster-slayer-for-hire and master swordsman with superhuman strength and reflexes. While trying to regain his lost memory, Geralt unwillingly becomes involved in a world-shaking power struggle. Created to provide entertainment for both fans of role-playing games and those seeking fast-paced action, The Witcher brings together epic storytelling and dynamic, visually stunning, and tactically deep action.

- Geralt of Rivia: a one-of-a-kind protagonist
- A charismatic and unique character, Geralt is a mutant swordmaster and professional monster slayer.
- Choose from over 250 special abilities correlated to attributes, combat skills and magical powers to build the character in a way best suited to tactical needs and style of play.
- Inspired by the writings of renowned Polish author Andrzej Sapkowski.
- Featuring adult themes, less fairy-tale than typical fantasy, with mature social issues like racism, political intrigue and genocide.
- It is a harsh world where nothing is black or white, right or wrong, often forcing players to choose between the lesser of two evils to advance.
- Full of turns, twists and ambiguous moral decisions which have real impact on the storyline.
- All quests can be accomplished in several ways and the game has three different endings depending on the player’s actions and choices throughout the adventure.
- Engage in complex yet intuitive real-time combat based on real medieval sword-fighting techniques.
- Motion capture performed by medieval fighting experts at Frankfurt’s renowned Metric Minds studio, resulting in 600 spectacular and authentic in-game combat animations.
- Six combat styles, dozens of potions, complex alchemy system, modifiable weapons and powerful magic add tactical depth to the fluid real-time experience.

More About The Witcher

Who is Andrzej Sapkowski? The Best Quotes from the Ultimate Game Master

Andrzej Sapkowski likes to splash. He comes across as a self-righteous, arrogant megalomaniac  but is it right? Maybe he's actually a misunderstood bard? Or maybe both conclusions are true? Or none?

In two months' time, an independent, full-length fantasy film will debut online. Big deal? Indeed, because it will be based on Sapkowski's prose. We met the creators and talked about this extraordinary production, created not with money, but passion.

How The Witcher franchise mixes fantasy with modern world?

The universe of The Witcher may seem like your regular, almost generic, fantasy world  give it a second thought, though, and youll find this world to be quite unique. But how was this achieved?

Theres a lot of mods out there, probably as many as theres games on Steam. Its a bliss, but it also means its quite easy to overlook some really interesting projects. Thats why weve come up with a list of 15 best mods for great games.