This page of the Callisto Protocol guide contains a walkthrough for the sixth chapter - The Colony. This walkthrough explains how to get through the Old Colony, where to get the elevator keycard, how to reach Dani at the rooftops in Hightown, how to defeat the Two-head boss, how to reach the laboratory and how to survive the boss fight with Captain Ferris. 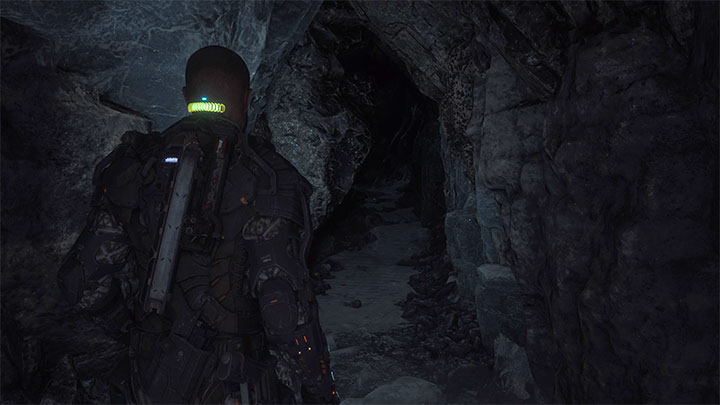 While going though the service tunnel, you can explore the area more thoroughly (e.g. a chest with a very valuable loot on the upper balcony) or follow the mission objective. You can reach the colony through a narrow side passage.

Find a way up to the Light Tower 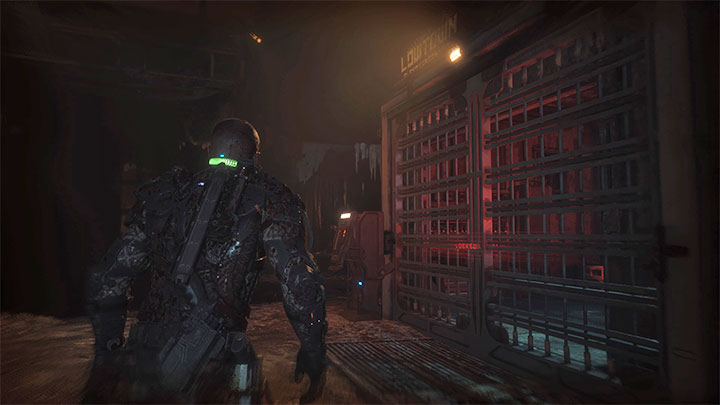 Jump down to the lower levels and you'll reach the main area of the colony. There are new blind monsters here - you can avoid them, kill them with stealth attacks or grab and throw them towards the spikes in the area (and there are many of them).

Reach Lowtown Elevator Control on the lower level of the colony. Pull the lever and check the console: you will learn that you're going to need a keycard. 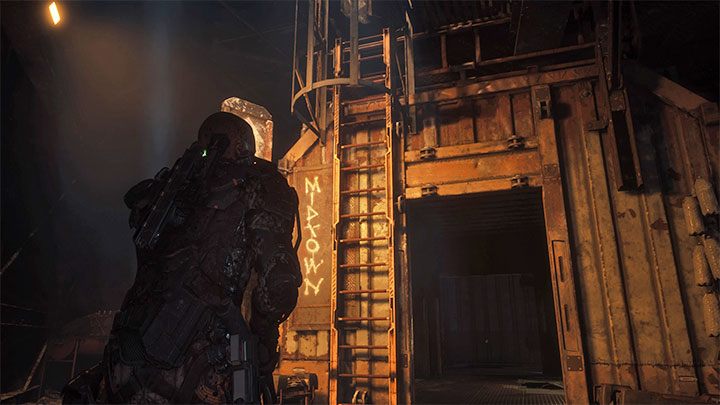 You need to explore the upper level (Midtown) - use the ladder located to the right of the elevator control room.

Before you reach the ladder, more monsters might attack you. Don't try to fight them in the small control room, just run around the area and grab the monsters again with the GRP to throw them at the spikes. 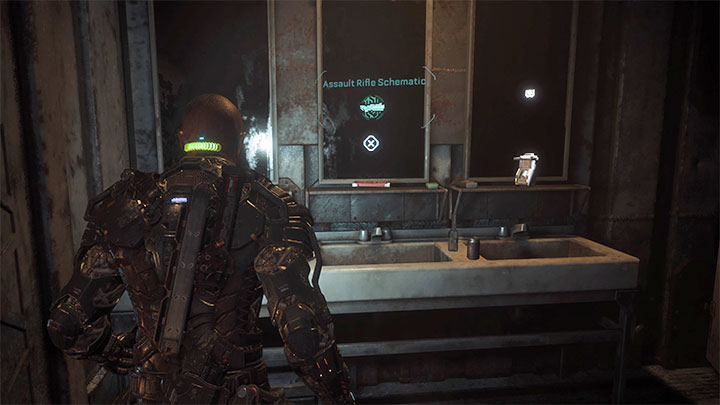 You don't have to go into all the buildings. To progress further, reach the General Store on the right.

Go to the L2 Bathroom adjacent to the shop - you will find an Assault Rifle Schematic there. You will be able to load it at the nearest Reforge station and purchase the rifle for 1,000 credits. 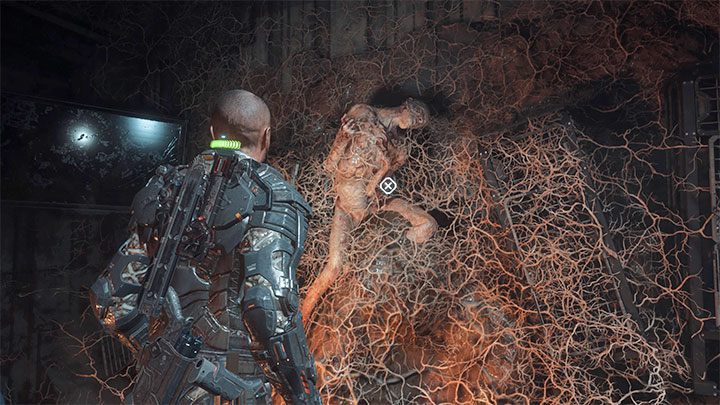 Leave the Bathroom and reach the Security building. You have to pick up the Keycard from the corpse stuck to the wall (as shown in the picture).

Return to the elevator 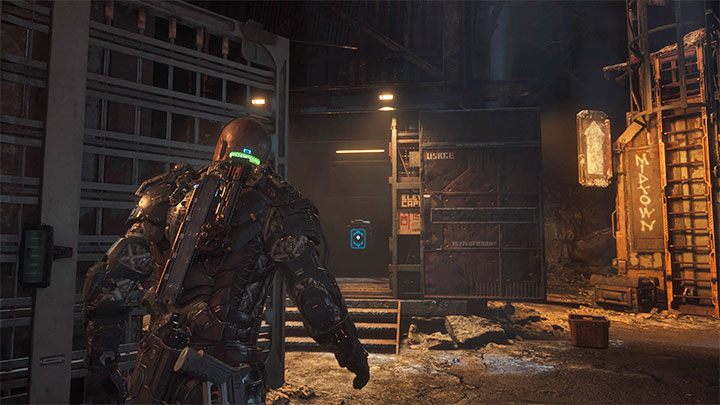 Head back towards the ladder. New monsters will appear in Midtown - you can easily deal with them by grabbing them with the GRP and throwing them down (they should die after falling from a great height).

Downstairs, eliminate the next monsters and insert the keycard into the console. This will unlock an elevator in the adjacent area (as shown in the picture) - reach it and start it.

Find Dani at the rooftops 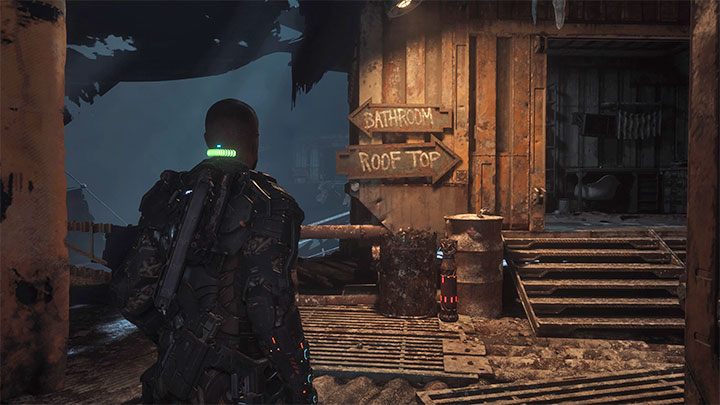 The elevator will take you to Hightown. Along the way, you may encounter blind monsters and creatures that will immediately attack Jacob. As often as possible, grab them with the GRP and throw them over the railings. They can die even if they land on the lower roof.

Take the stairs up. At some point you will reach crossroads (as in the picture). 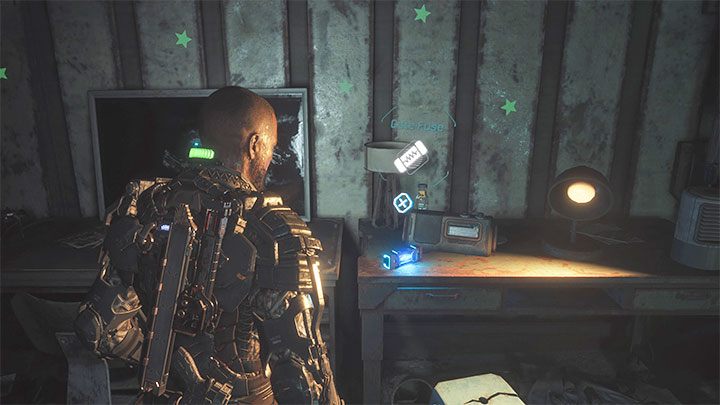 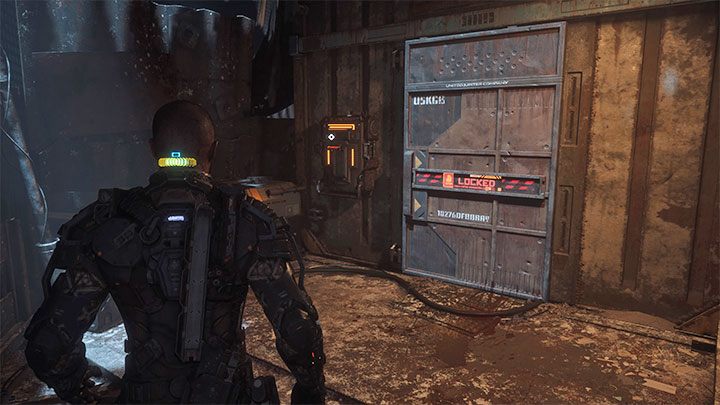 Head in the opposite direction, i.e. to the right path (Roof Top). Watch out for crawling exploding monsters along the way - they can easily surprise you when traveling along narrow paths. If necessary, retreat and fire at them from a safe distance.

Ultimately, you have to reach the closed passage shown in the picture - use the fuse to unlock the door. 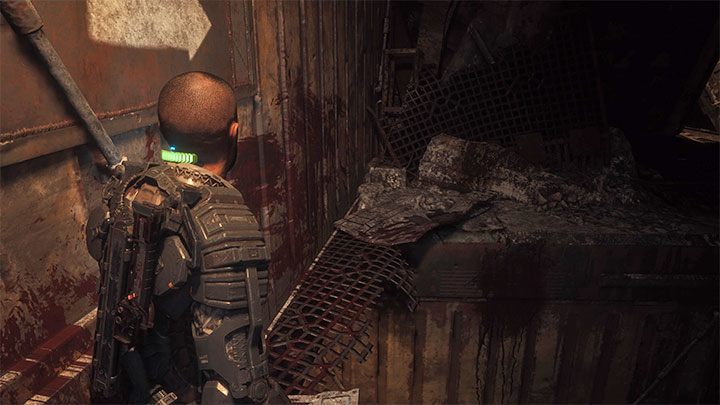 There is a Reforge in the new location. Don't forget to print the Assault Rifle. If you have very little ammo, you can also replenish your supplies - they will come in handy soon.

Use the ladder and jump through the hole in the roof to the new room. You will meet Dani and a cutscene will start.

You have to defeat the Two-head boss again. 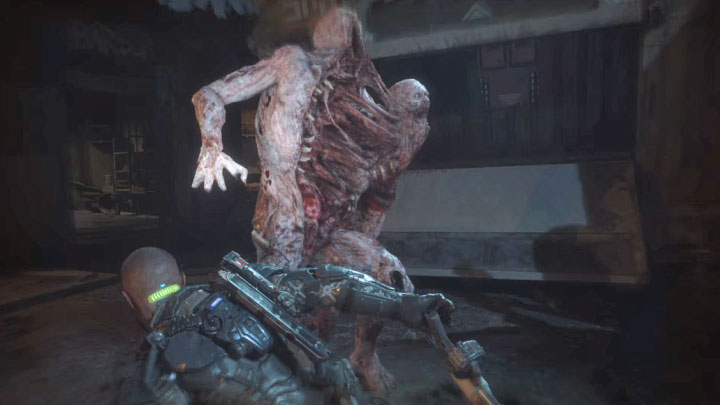 The general assumptions of the fight are similar to the previous confrontation - you have to avoid all melee attacks, because if he manages to hit or catch Jacob, he can kill him right away. Keep the knob tilted left or right in advance. 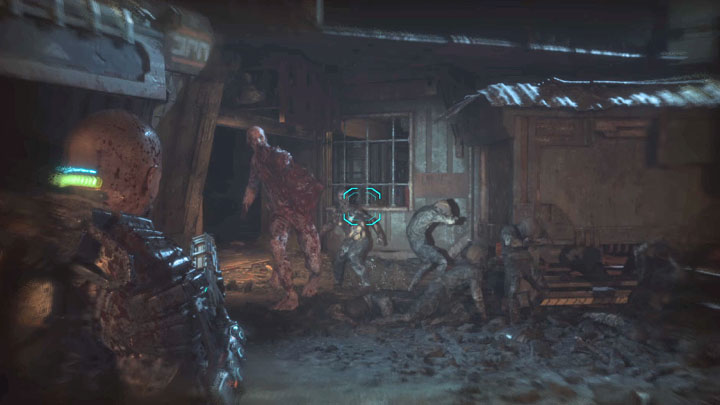 An additional difficulty in this fight is the fact that ordinary monsters can appear in the area as well. The best method is to quickly grab them with the GRP and throw them towards spikes or other surfaces, thanks to which they will die quickly. 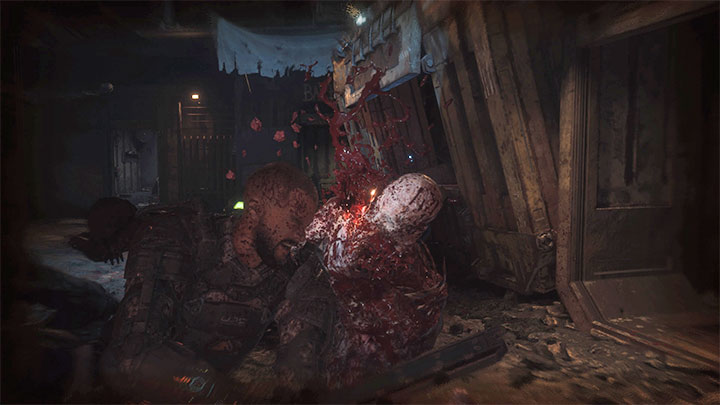 Use good firearms to attack the boss. Notice that there are also exploding containers in the area that can be grabbed using the GRP.

The weakened boss will kneel. Once he does, you have to run up to him and attack him with a melee weapon. Do this twice - first so that Two-head loses one of his heads and then to finally defeat him. Remember to pick up the loot left by the defeated boss (computer printer worth 1,000 credits).

After the battle, follow Dani (before that, collect the loot from the arena). Jacob will fall down and the heroes will get separated again. 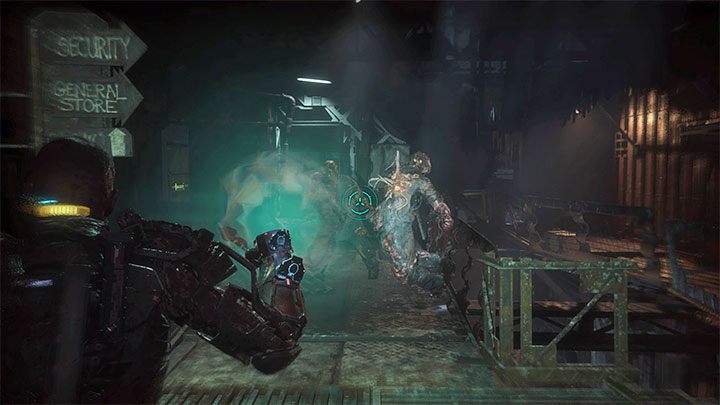 In the new location you will find the Reforge. The main character will return to the previously visited Old Colony. You need to reach the ladder - throw down or kill the monsters if they are too close, because they can attack Jacob while he's climbing the ladder.

On the upper level, defeat or throw down more creatures. Head straight towards the Clinic. After opening the door, you will meet Dani and the current fighting will come to an end. Use the Reforge and follow Dani. 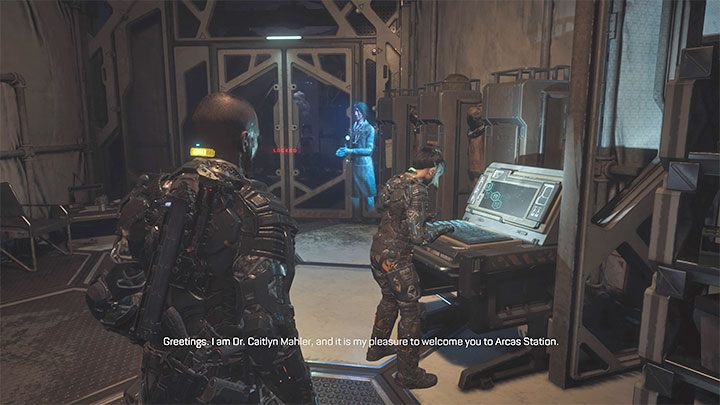 Reach the big gate. After unlocking it, head into the dome (the lab). You can optionally listen to more recordings of Dr. Caitlyn Mahler here. You will also find the source (storyline trophy).

After one of the cutscenes, a mutated Captain Ferris will appear - you have to fight the boss for the first time. 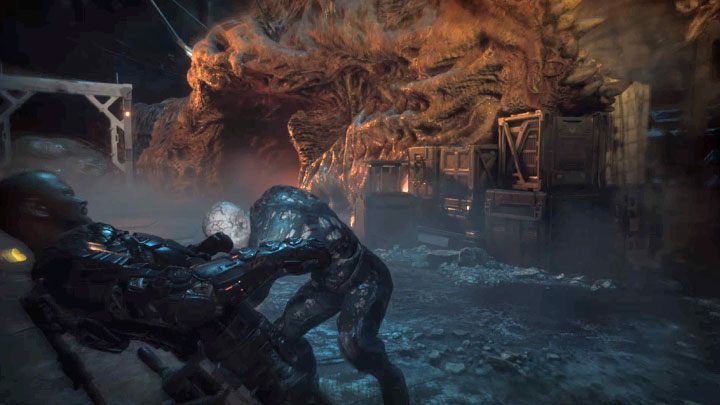 Let the boss run up to Jacob and perform 3 flawless dodges in a row. 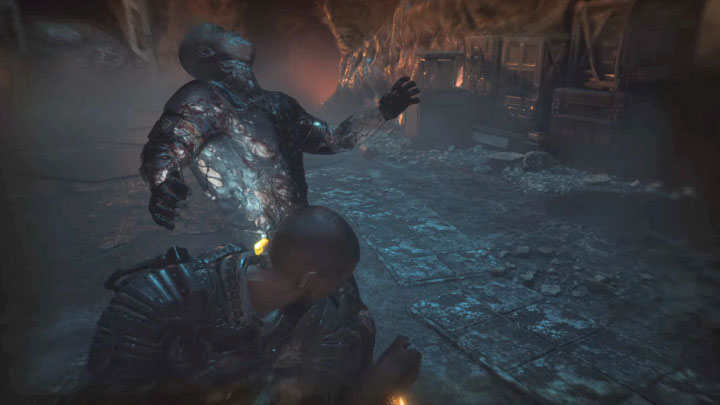 Right after Ferris ends his series of attacks, hit him with melee weapons. In addition, you can fire a quick shot (after a blue icon appears).

Repeat the sequence until the next cutscene starts - Dani and Jacob will escape from the arena and the fight with Ferris will end.

Exit the Colony on the funicular 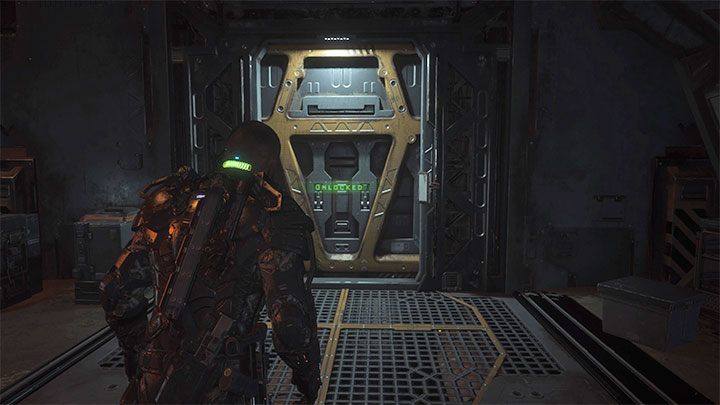 Follow the linear route and reach the interactive panel.

After the cutscene with Dani, reach the Reforge and the large gate. When you try to open the next door (see the picture), a cutscene ending the chapter will start. You will advance to the final chapter, Tower.