You will meet the last Boss in Spider-Man Miles Morales in the 17th main mission - The Battle for Harlem. Tinkerer has many weapons, unique punches and gadgets. On this page you will find useful tips on how to win this duel. 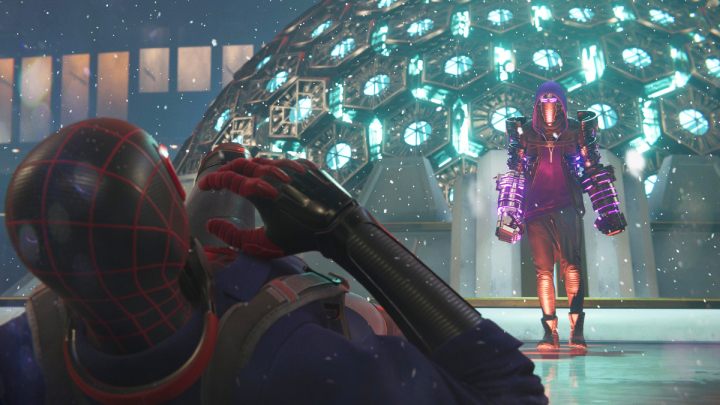 Tinkerer, a.k.a. Phin Mason is a longtime friend of Miles. When their paths diverged, she became the leader of the Underground group, which is at war with the Roxxon corporation. She can use powerful programmable matter that powers her many weapons and armor.

Tinkerer first appeared in "The Amazing Spider-Man vol. 1" #2 in 1963, whose original identity was Phineas Mason. A female version of Tinkerer was created for the game, with some inspiration from the Ultimate Tinkerer, also known as Elijah Stern, from the comic book "Ultimate Spider-Man vol. 1" #90 of 2006. 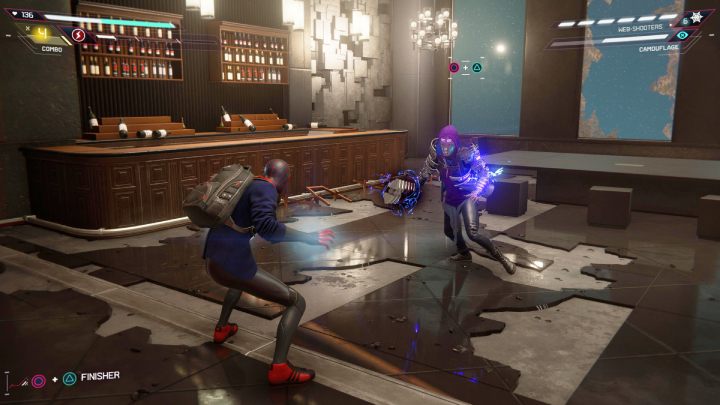 Tinkerer has all the technology of the Underground. This means that she can freely change her armor for protective gloves or a shield, equip herself with various weapons and use all the fighting styles that members of the Underground have at their disposal.

Smash the protective gloves with Venomous Strike and use perfect dodging when Phin is coming at you to quickly attack her from behind. When she equips herself with a sword, she will be able to perform long range attacks. Watch out for them, as they deal a lot of damage and nullify your Venomous Strikes.

If the Tinkerer triggers the wide purple ring, quickly jump away, otherwise you will be caught in a powerful shockwave. A perfect dodge will slow you down for a moment, allowing you to use Venomous Sprint to attack Tinkerer immediately. When she is stunned, continue with a series of punches or special abilities. When she stands up again, be ready for her incoming counterattacks. 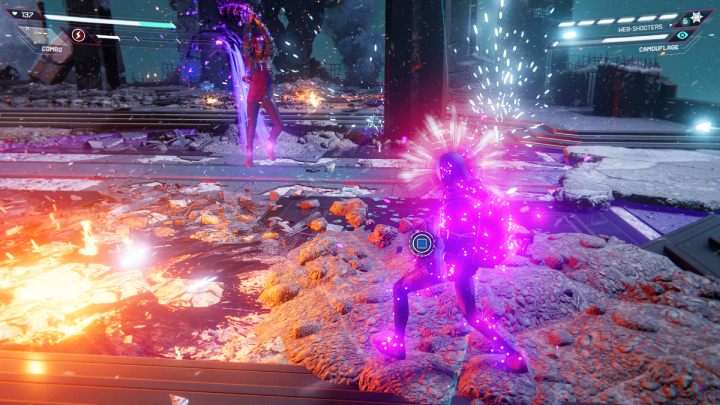 When the reactor starts pulsing, the second stage of the fight will begin on the roof of the skyscraper. Tinkerer attacks will become more aggressive. When she jumps away from you she will start loading the rocket launcher. Avoid the purple rays, make a Venomous Sprint towards it and attack at the right moment. If you run up to it too late, Tinkerer will jump up and create a powerful shockwave.

Sometimes during your attacks, Phin will shield himself with a shield and perform a counterattack after which he will throw bolas in your direction. If you are caught in them, wait for the Tinkerer to draw his sword. When he takes a swing, quickly press square to free yourself from the trap and dodge. Her sword will get stuck in the ground, thus exposing her to your attacks. 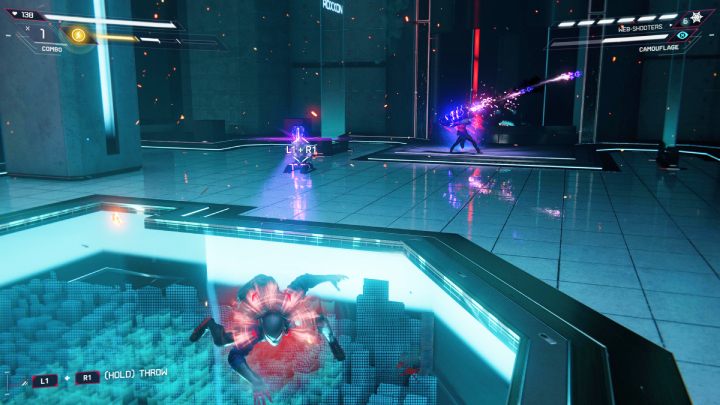 In the next phase of the fight, you will return to the lower level of the building. The Tinkerer will produce several laser cannons that will fire in your direction. Watch out for burning craters that will nullify your venom abilities for a while.

Walk up to the laser cannons, grab them (L1 R1) and throw them at Phin to deal as much damage as possible, continue your attacks with Venom Sprint and a series of punches, or use camouflage to get close to her. 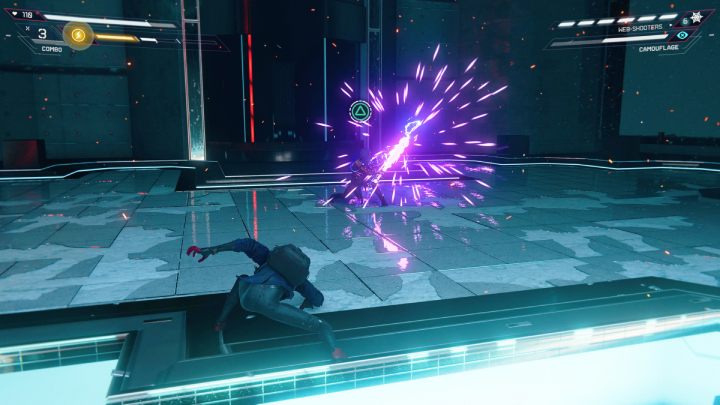 After another cinematic interlude, you will find yourself in the final phase of the battle. This time your opponent will start sending rows of saws in your direction. She will continue to use traps and various weapons. Attack her with several strikes and quickly move away from her.

When you deal enough damage to her, Tinkerer will start throwing you across the room. Avoid the waves of blades and wait until a triangle appears above her head, this is a sign that the opponent is weakening. Perform ultimate attacks to knock her down.