The following page of the Spider-Man Miles Morales guide contains a solution to the mission called Like Real Scientists. Here, we have elaborately described how to get to the Science Center in the Upper East Side and how to turn off the four generators to disable the protective barrier around the roof entrance to the building. You will also find out how to open the door during Miles' flashback. 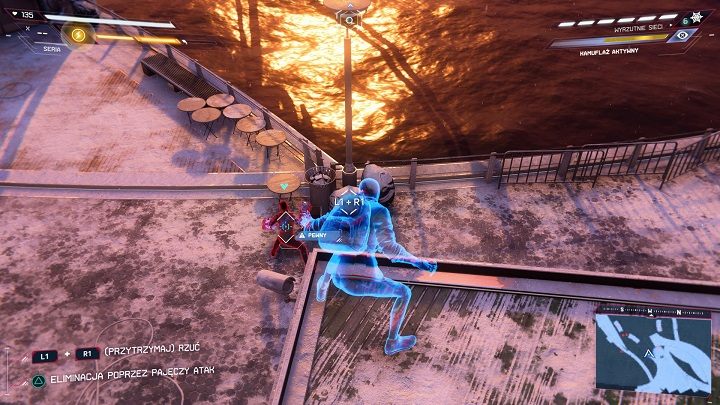 Upon arrival at the abandoned Science Center, you will have to clear the area of the Underground members. Watch out for snipers and eliminate enemies one by one. Use the camouflage and distract your opponents to remain unnoticed. Once you get rid of all your enemies, jump onto the roof of the Oscorp building. You have to remove the barrier around the hatch to get inside. To do so, switch off the four generators. Scan your surroundings to check where they are. 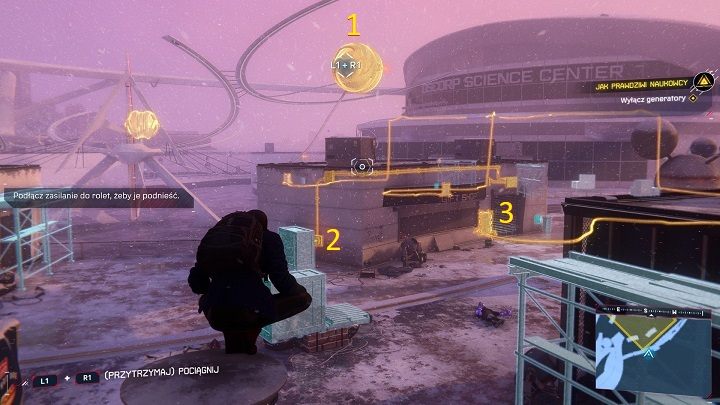 First, you need to correctly set up a structure with three spheres in front of the building. Press L1 R1 to pull a single sphere (1). Each sphere has a red node (2) attached to it which you can connect the power supply to. This will allow you to roll up the shutters and get to the generator (3). 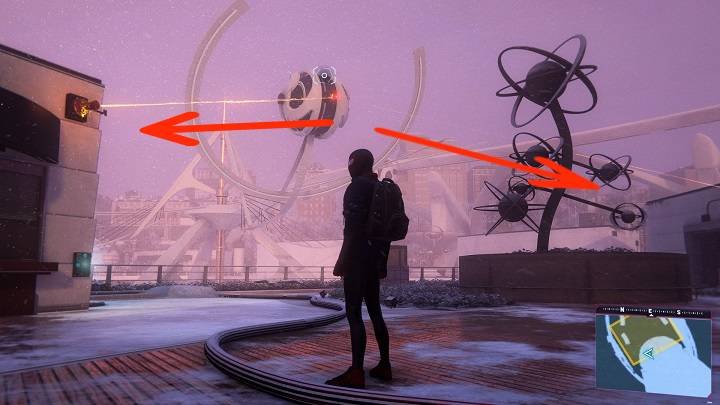 There are two generators right in front of the Science Center. Tether the red node from the sphere visible in the picture above to two nearby nodes located on smaller buildings. The gate to the generators will open and you will be able to use your skills to deactivate them. 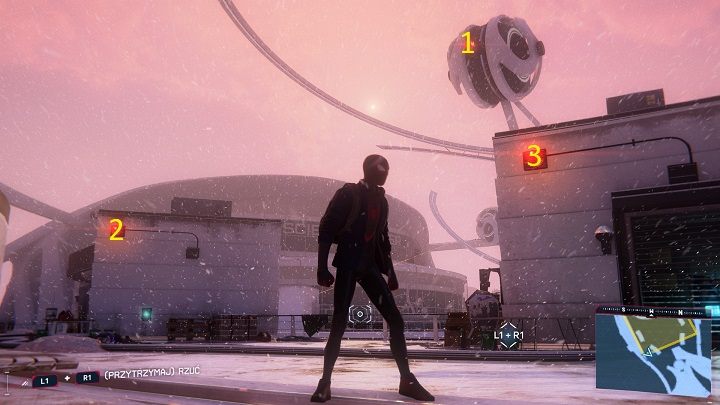 To the right of the main building, you will have to run the web first from the sphere (1) to the building (2) and then to the correct node (3) to power the shutters and get to the third generator. You will find the last generator on the left side of the square. If the node is covered with something, just smash it. Then, connect the node to the sphere and disconnect the barrier. 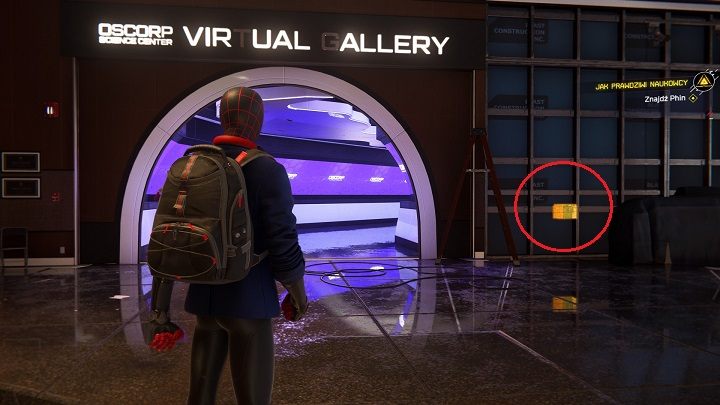 Jump on the roof and use Venom Smash to get inside. Scan your surroundings and go to the virtual gallery. You will find an Underground Cache on your way there. Jump to the next room through a hole in the ceiling and go towards the marker on the screen. 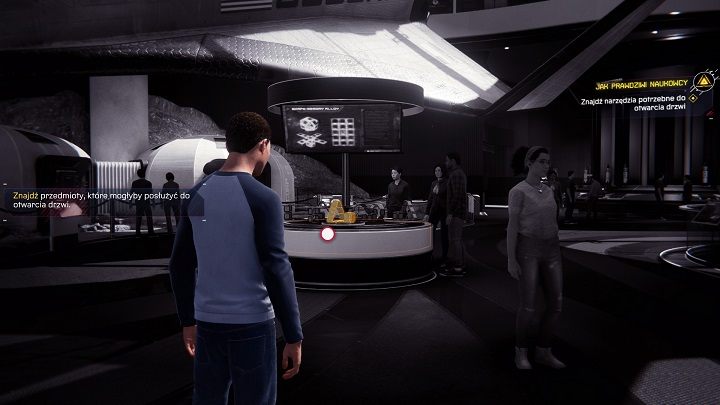 After a short cutscene, you will experience a flashback. Follow Phin. You can approach the exhibitions and examine them along the way. In the next room to the left of the entrance, you will find a mini game. You can play with Phin and win the Competitive Spirit trophy. Approach the woman near the elevator.

When you find out that you will not be able to get to the upper floor, Phin will notice a nearby glass door. Go up to the door and press the triangle. You will have to find two elements. The first one is an object that can change its shape. Scan the surroundings and take the element from the exhibition at the entrance to the room. 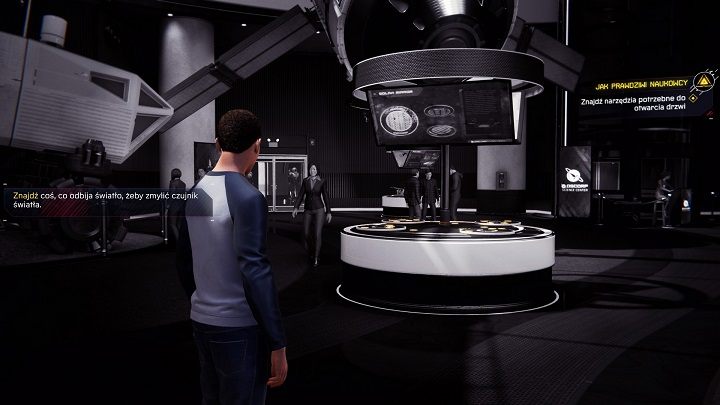 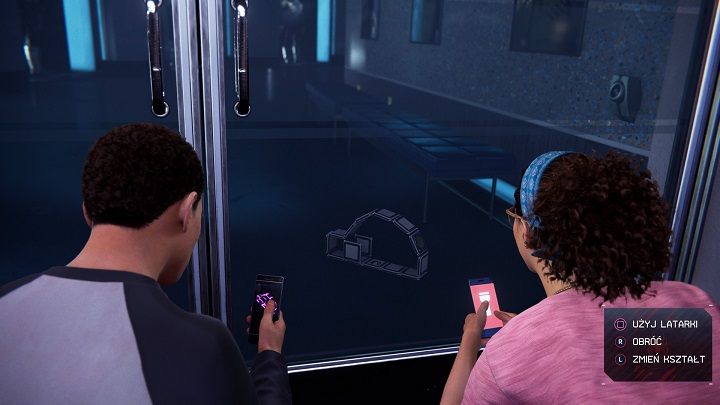 Phin will slide the two connected elements into the gap under the door. Change the shape of the object and point it in the direction shown in the picture using the left analog stick. Turn on the flashlight with the square and the door will open. In the next room you will find Miles and Phin's project on display. 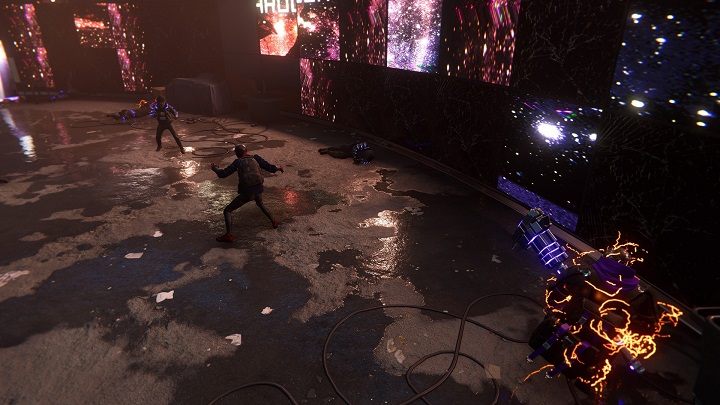 After a short cutscene and the end of the flashback, you will have to fight the members of the Underground again. Remember to rid strong opponents of their shields first. Clear the first room and then jump to the snipers. At some point, another shielded enemy will smash through the wall. After defeating everyone in the last room, leave the Science Center through the ceiling and complete the mission.