After you enter the mission 3 map (Spy Academy) in Sniper Elite 5, you will be given the task of finding the meeting place of high-ranking German officers. Before this happens, you will also have to infiltrate the island and reach the buildings. The walkthrough in our guide describes all of these activities and tells you how to get rid of the first snipers on the map.

Getting to the main part of the island 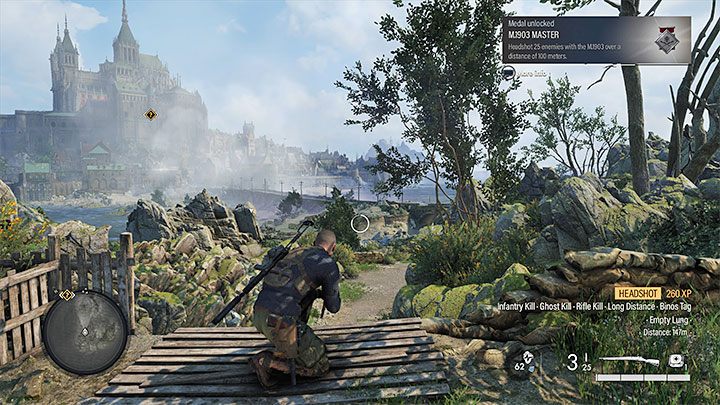 You start at the southern end of the map, and before you deal with the first main objective of the mission, you have to reach the northern island (the one with the monastery).

Soon after the mission starts, you will reach the viewpoint shown in the picture and you should use it to get rid of nearby enemies. From here, you can take long shots without the risk of being heard. To be extra secure, you can shoot when the planes flying over the map generate a sound wave (it will appear on the screen as noise zone). 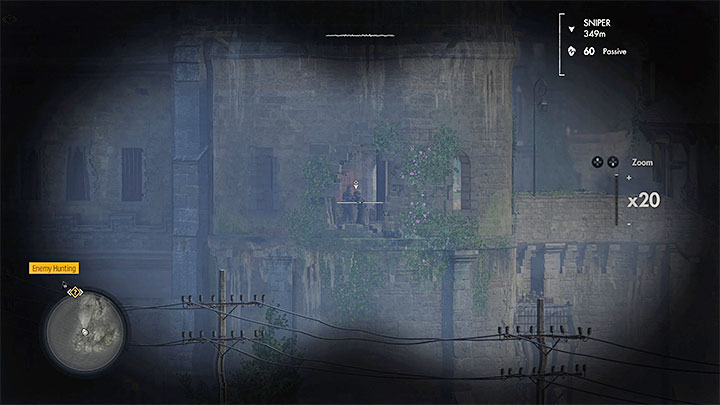 Try to eliminate as many enemies as possible from the beach (including those traveling by motorcycle) and from the buildings below. It's even more important to kill the snipers on rooftops of distant buildings. You should notice two in front of the starting point, one or two on the left and one more on the right. Carefully scan the area with binoculars so as not to miss the snipers (they would pose a problem later on). 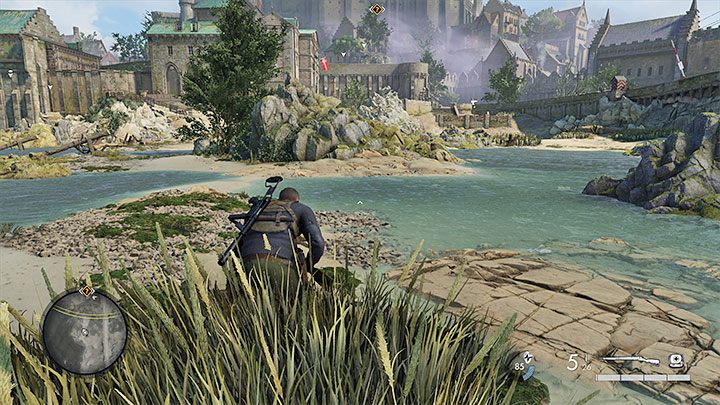 Set out towards the island after you have cleared the area. If you feel confident, you can travel in the open, but it's safer to hide on the way behind bridge supports and other large obstacles.

After reaching the lower part of the town, we do not recommend the right path, because there is a minefield there (you can see some warning signs) and it's very easy to die there. Instead, start your making your towards the upper buildings around the monastery in the middle or area on the left.

Finding out the location of the meeting

Also: the game theoretically doesn't require you to get hints about the meeting place in order to advance in the mission. If you have problems finding these hints, you can go to the meeting point described on the next page of the guide right away, and the game will progress the usual way. The active task should change as you approach your destination. 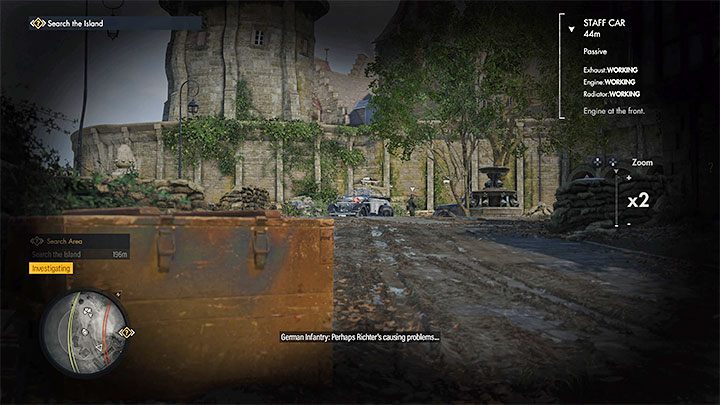 The game will not show you the exact target marker of the mission. You have to find out the details of the planned meeting of the officers by conducting a small investigation. There are 3 main ways to gain knowledge of the meeting location.

The first one involves examining the parking lot by the winding road in the western part of the map. You could have noticed this place while checking the area from the vantage point at the beginning of the mission. There are several vehicles there (picture above). 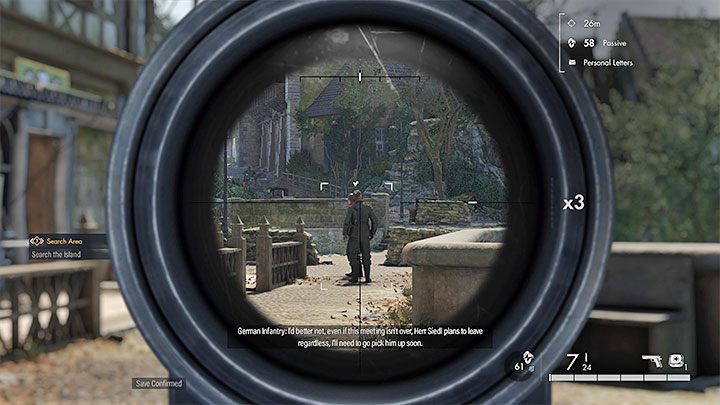 During the journey towards the parked vehicles, try to avoid or silently eliminate the enemies so as not to unnecessarily alarm the area. If you manage to sneak into the mentioned location, you can eavesdrop on the soldiers' conversations and thus learn the planned meeting place. 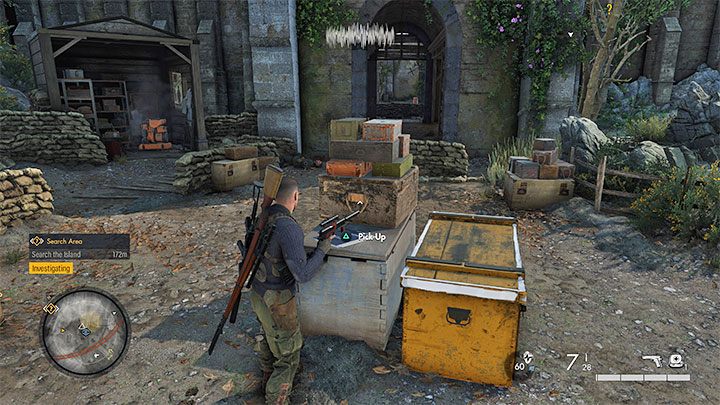 The second option is to take over the Richter's package. The game might mark areas with new hints to be found with an eye icon. The first such area is the lower town that you will reach after crossing the beach.

In the area, you can find the document shown in the picture above. From it, you will learn that the next hint is in one of the enemy outposts. 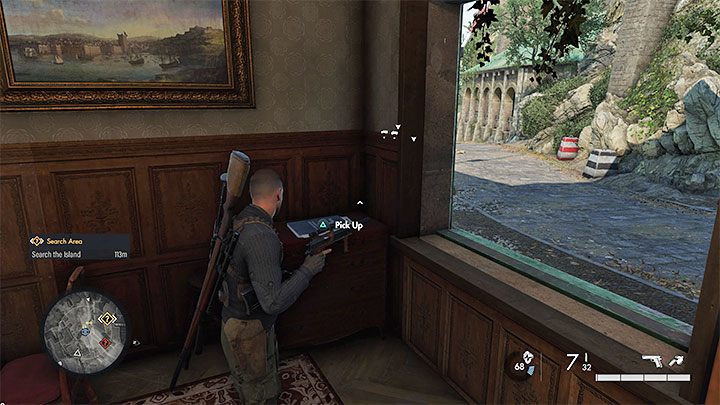 You have to reach the checkpoint in the middle of the map, where the road forks and one of the paths leads towards the largest monastery building. You can get there in different ways – by traveling along the main roads or by searching for climbing spots along the way (vines can be helpful).

You have to look for a delivery plan near the outpost. Investigating the building next to the checkpoint will allow you to obtain another document (picture above) regarding the priority package. This will be enough to learn the location of the meeting. 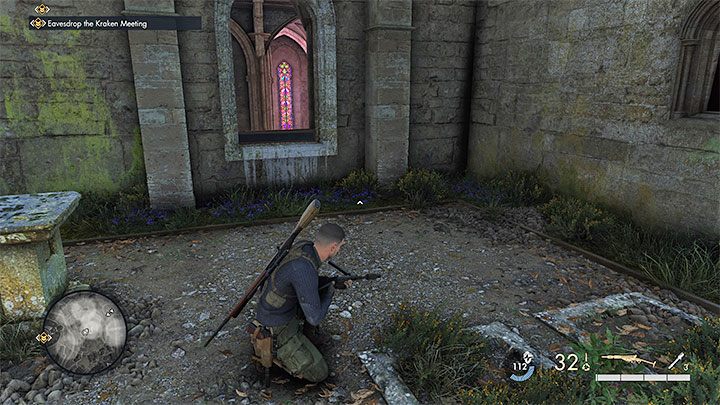 You can get inside the church, e.g. by walking through one of the shutters. 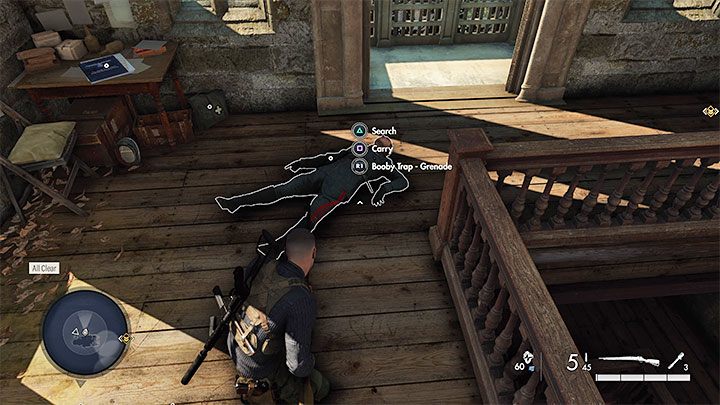 Locate the stairs leading to the church tower. There's a sniper and Bruhl at the top. Get rid of both of them in any way you like. After doing that, examine Bruhl's corpse to find a letter with information about the meeting's location.

Side note – killing Bruhl will not jeopardize the main objective of the mission in any way. The meeting may still be held and Bruhl simply will not attend.