Mission 1 (The Atlantic Wall) of Sniper Elite 5 consists of multiple objectives, including gaining control of the beach, investigating the processing plant and saving one of the resistance members. Our walkthrough explains how to destroy the spotlights, how to get rid of the initial group of opponents encountered at the beach, how to reach the processing plant, where to find the interrogated ally and how to save him, and also how to unlock free roam. 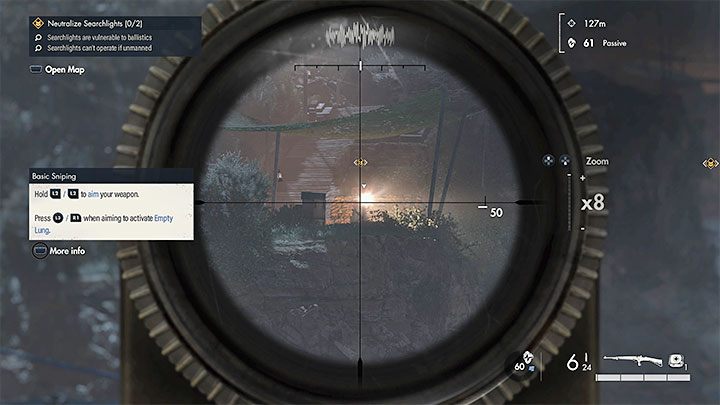 The first objective (Neutralize Searchlights) is a part of the tutorial of Sniper Elite 5 - this task is received while on board a surfaced submarine.

Start by equipping your binoculars and tagging enemies manning both searchlights. Once the targets are tagged, switch to the sniper rifle. Shoot at the surface of the searchlights . In the course of this objective, you'll also test out holding your breath to make accurate ranged shots. 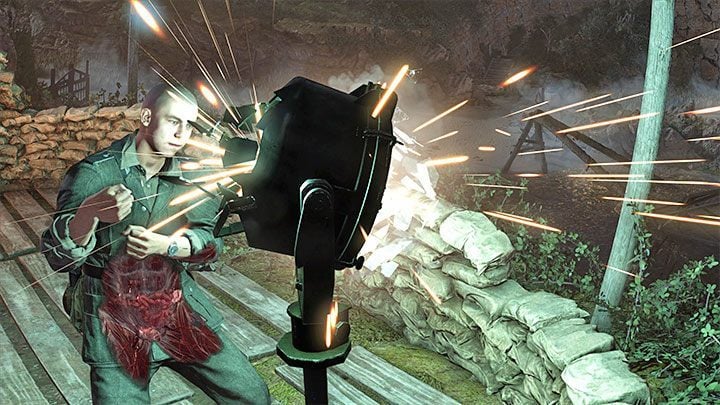 The bullets will pierce the searchlights and enemies manning them. 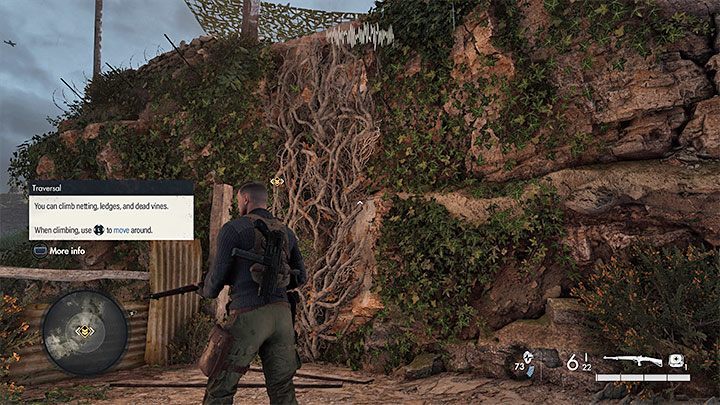 After the cut-scene concludes, you'll find yourself on the beach. The path forward is linear - you'll receive an option to free roam the mission zone but that will happen in the further part of the mission. Along the way, you'll receive additional tutorial messages that will help you get acquainted with various mechanics.

You'll start by trying out crouching and climbing. You can make use of interactive vines to climb to various hard-to-reach locations. After you encounter the first bodies, you can search them to find and equip additional weapons. Once you're ready, slide down a steep slope. 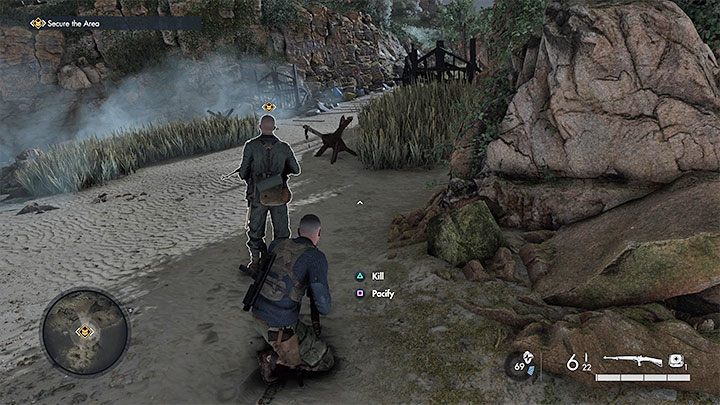 Now you'll try out stealth. Remember to stay crouched and use tall grass to reduce the chances of being detected (note - these areas don't make you completely invisible!) You'll also learn how to takedown opponents - after approaching them from behind, you can kill or incapacitate them. 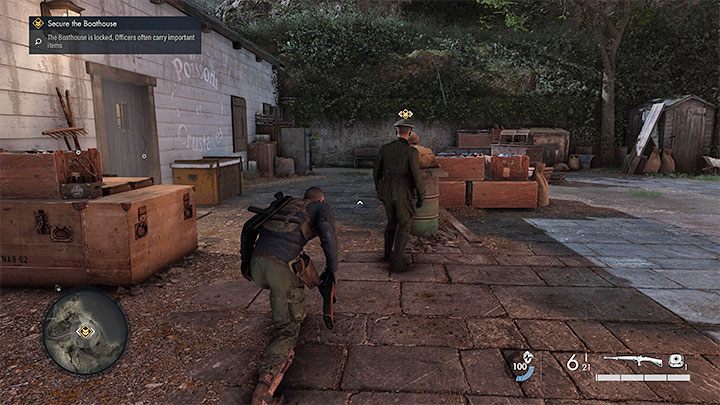 Further ahead, you'll reach the Boathouse and receive an objective to secure it. Make use of Focus to scan the area and tag nearby opponents. To detect enemies, you can also look at your radar (the opponents will be marked with circles) or use your binoculars.

Ultimately, you have to reach the area to the right of the building. Sneak up to the enemy officer and take him down. A Boathouse Key will be found on his body. It can open the nearby door. 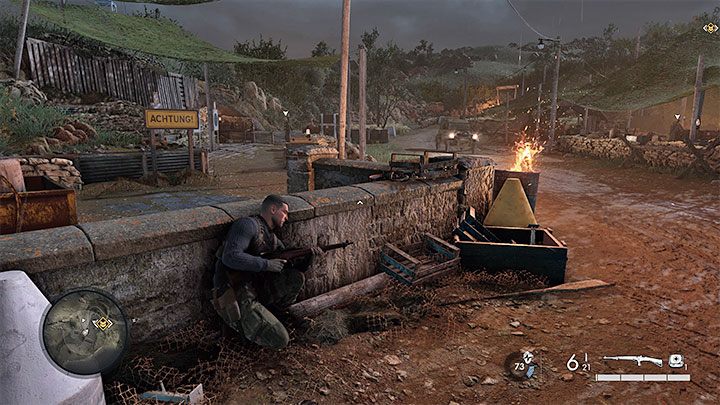 A new objective will be added, ordering you to search a processing plant.

A vehicle operated by an enemy crew will appear in the vicinity. You can try to kill all of the enemies before they disembark the vehicle (e.g. by throwing a grenade) or wait in hiding until they disperse. The second option will allow one-by-one silent takedowns until the area is clear. 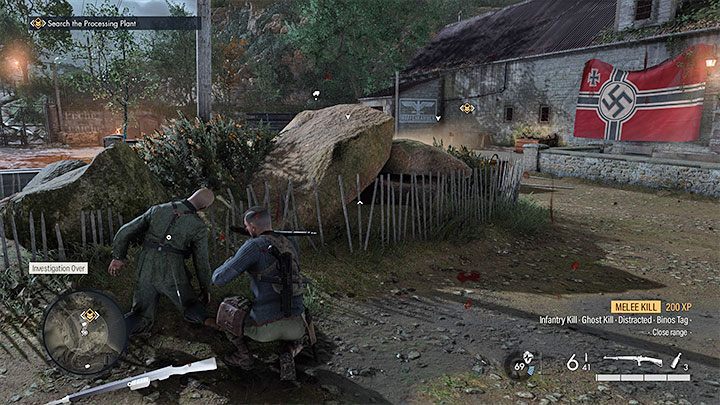 You have to climb a nearby hill - either follow the winding path or climb vines. Watch for an enemy guarding the hill - you can sneak up to him or shoot him from below.

There is a parked truck near the processing plant and enemies are standing around it. Scout the area with your binoculars to tag all of them. As you approach the processing plant, you can hide in the grass and distract opponents with bottles. This will make them leave their post (and separate them from the rest of the group) and become easy targets. To avoid raising an alarm, you can pick up the bodies of killed opponents and hide them in the grass. After the area is secure, go to the building entrance - a cut-scene will be activated depicting a meeting with a resistance ally. 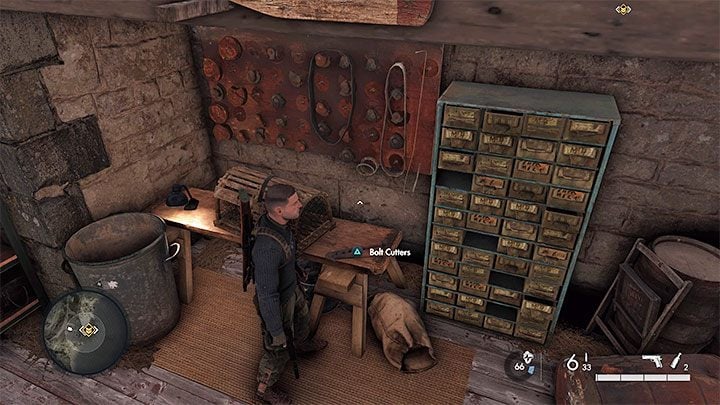 Investigate the building where the ally was held. You'll find Bolt Cutters and a locked door leading to the armory. To open it, you can use a lockpick (don't worry, they don't break here) or break the padlock with Bolt Cutters (the second option creates noise). 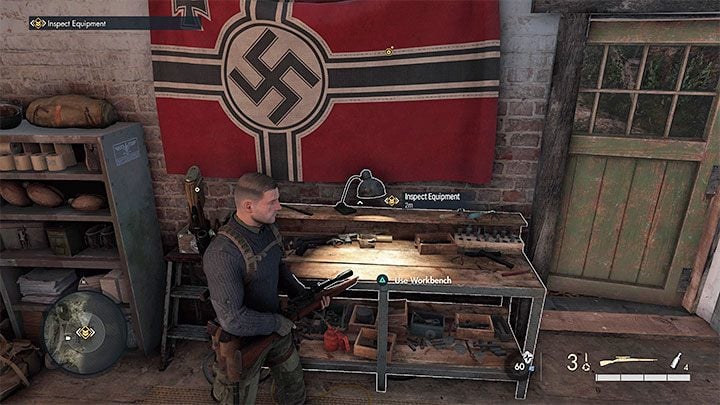 Eliminate a single enemy in the newly unlocked room. The armory contains a lot of supplies (including special ammunition which has different properties), a provisional sniper rifle that has more stopping power, and the first workbench (you can use it to modify your weapons and install new clips, barrels, grips etc.)

Back on Track - unlocks free roam 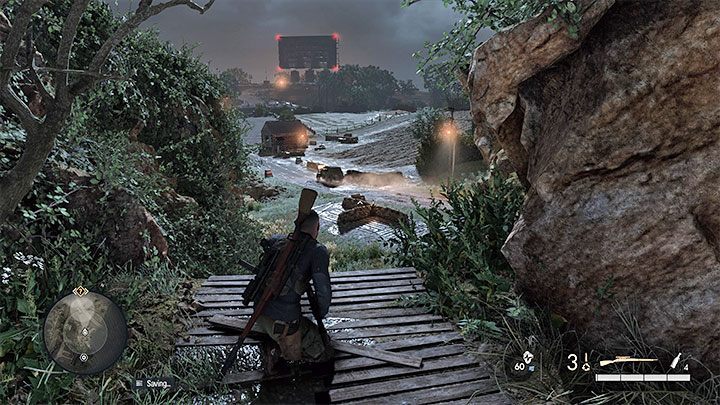 Your new objective is to reach the Vantage Point. Exit the armory building and follow the linear path that leads through the caves. You should reach an area shown in the screenshot above. From now on, you can free roam the mission area.

To find solutions for remaining objectives, we recommend visiting the individual pages of Mission 1 walkthrough.

The objectives described above can be undertaken in any order, but only two of them (Neutralize Radar and Recover the Resistance Intel) are required in order to complete the mission successfully.