This page contains walkthrough for the last mission, City of the Serpent, available in Shadow of the Tomb Raider. Lara has to reach the titular city and face the final boss, Dominguez.

Reaching the City of the Serpent 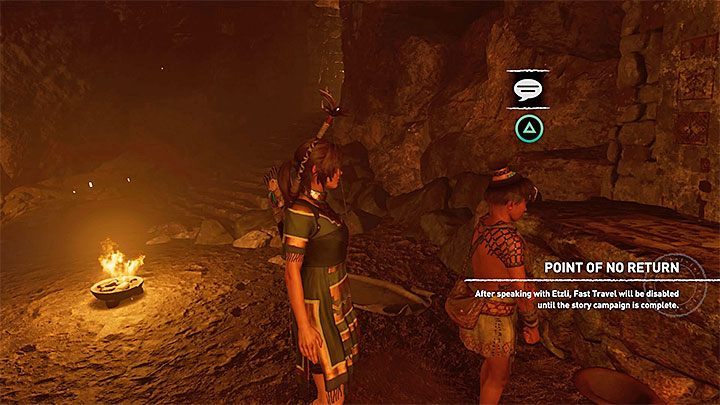 The mission starts in the rebels hideout in Paititi, the Hidden City. Proceed to the game's finale by telling Etzli that you are ready to go to the City of the Serpent. Once you do that, you won't be able to go back to the previously visited locations. However, you don't have to complete every side activity before you decide to progress to the finale - Lara can still explore the game's world even after you beat the game.

Equip Lara with good weapons (buy them from merchants), choose abilities that are useful in combat, take extra ammo and wear a good outfit. 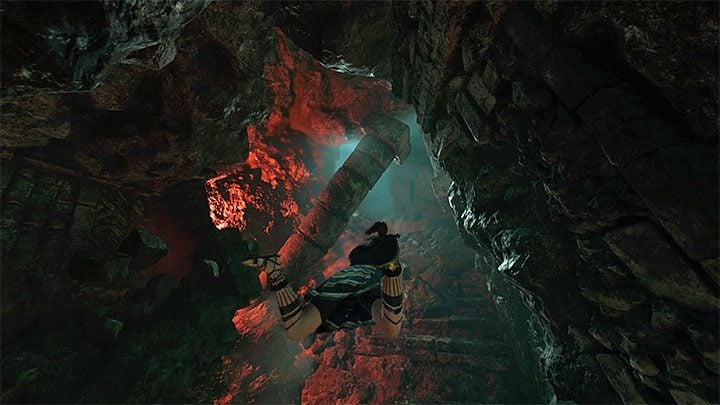 You start in water with Urunatu's Amulet in your inventory. The journey to the last location in the City of the Serpent is linear - you won't find any treasures there.

Dive to continue. Remember to reach the spots with air if Lara needs to catch a breath. Watch out for large falling objects which will appear in the later part of your journey. Avoid them by swimming in a slalom and try to not stop - you don't want to run out of air. Watch the cut-scene during which Lara reaches the City of the Serpent. You receive a new objective - head to the Crimson Fire. 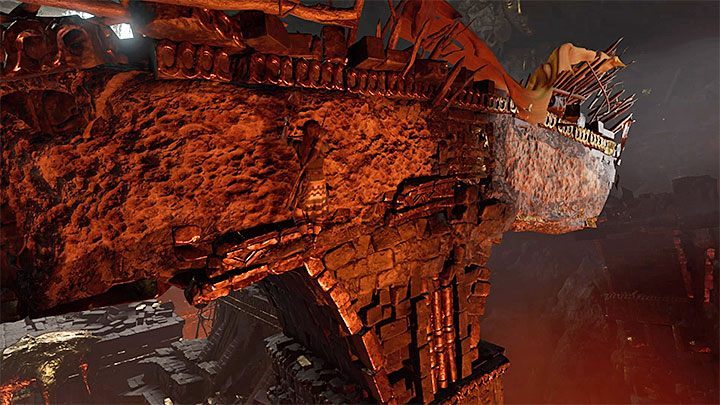 Although the path through the City of the Serpent is linear, you will have to watch out so you don't fall down. Approach the ledge, use your grapple axe and attach it to the climbable wall visible in the distance. Climb up and move forward. Avoid gaps and remember to grab the interactive ledges.

Use the grapple axe to grab another climbable wall and then move right (see the picture) by jumping on the adjacent wall. 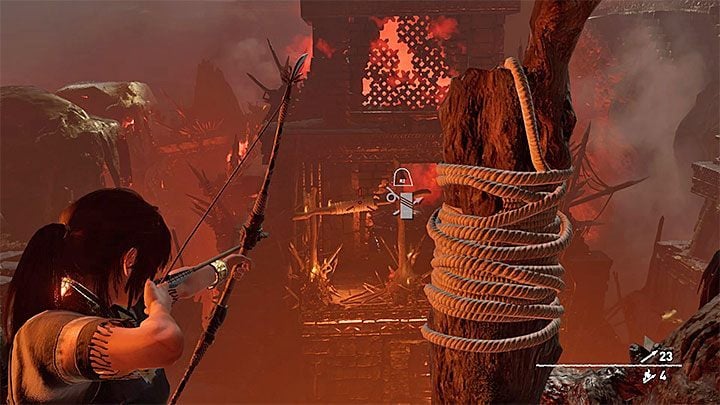 Slide down on the rope, swing and then jump towards the ledge. Approach the pole with ropes. Aim with your bow at the ropes in the distance. Connect both coils with a rope and then slide down.

Lara meets with Yaaxil but this time the woman isn't hostile towards you. What is more, Lara must now cooperate with savages in eliminating Trinity mercenaries. You also receive a unique headgear and unlock Queen of the Damned trophy. After making a few steps you will unlock a photo of the Crimson Fire. 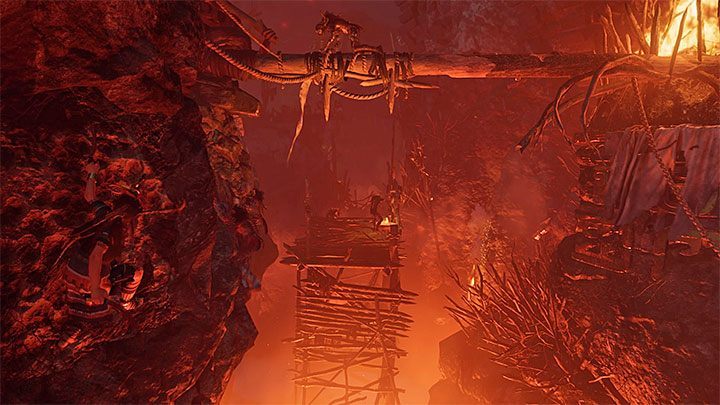 Jump on the new climbable wall. Reach its highest point. The picture above shows the place where you have to jump towards the grapple point (remember to press the right button to grapple it mid-air with your axe). Climb the upper ledge and then watch another cut-scene. 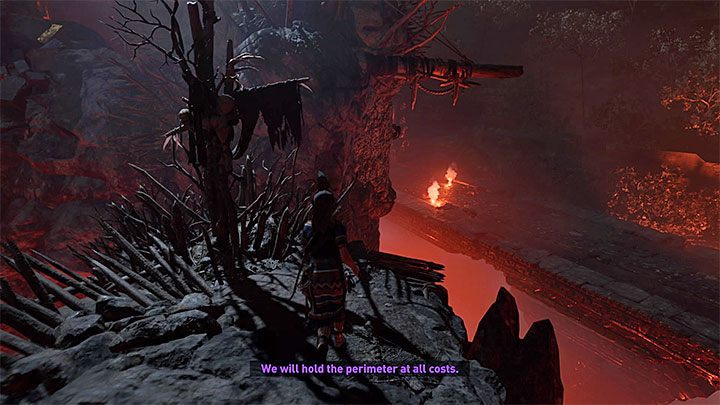 Start running towards another grappling point (the picture above). Use your grapple axe and then jump towards the wall. Ignore the Trinity mercenaries - they are currently fighting with savages. Keep climbing by reaching new ledges.

Watch yet another cut-scene. Then, you have to move to a new area where you will meet with Dominguez. 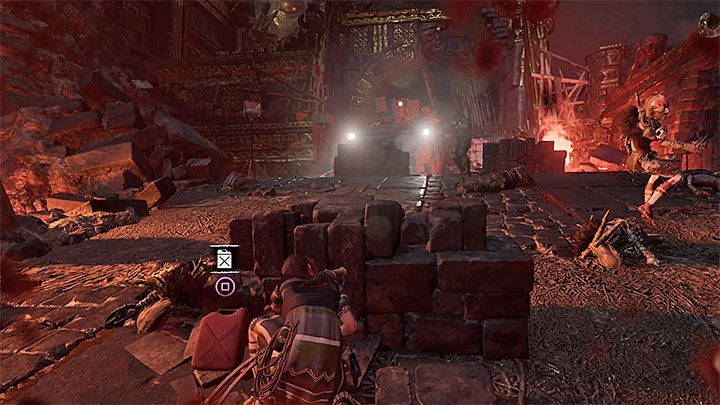 Start attacking the Trinity mercenaries. Use your rifle and aim at heads to kill enemies faster. Besides that you should also look for red containers. Shoot them to cause an explosion.

In the next area you have to avoid an APC fire - hide behind "indestructible" covers. Look for exploding containers and shoot them. You also have to throw canisters with gas at the vehicle. Secure the area - after that the Queen of the Damned will attack the APC's crew. 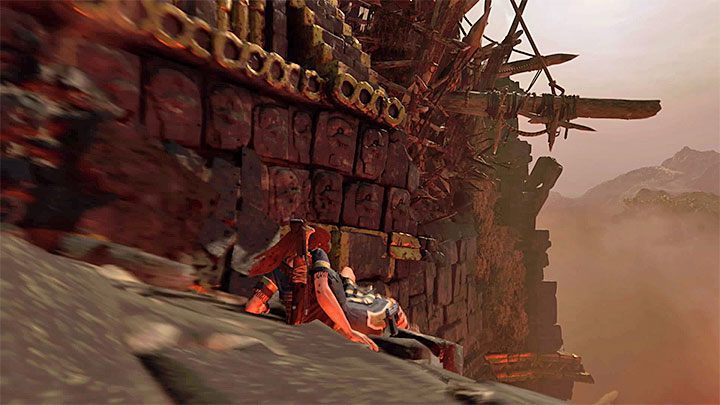 Climb the wall on the right side of the destroyed APC. Lara reaches a campsite in the City of the Serpent - use it to change your equipment or to unlock new abilities. However, you can't use fast travel option.

Head towards the wooden balconies - they will lead Lara to another climbable wall. During your climb you will have to make a few quick moves. The moment presented in the picture above is the most important - use your grapple axe to hook it on the grip before Lara falls down. 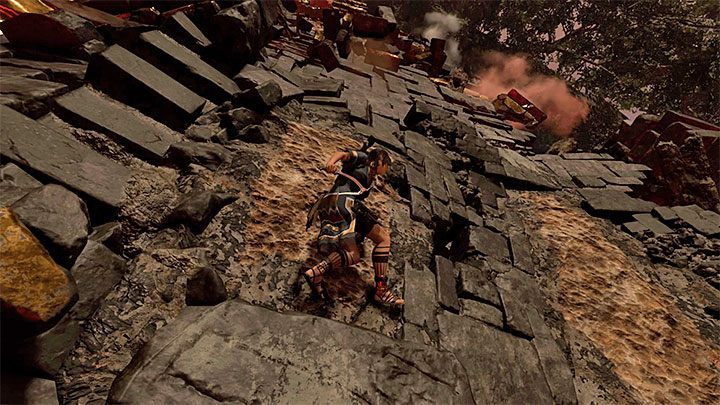 Keep climbing. The picture above shows an important part - quickly jump towards the adjacent wall to avoid falling objects. 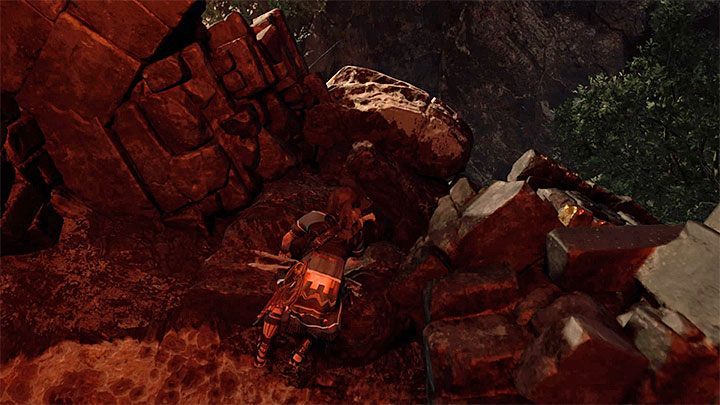 Keep moving upwards. Reach the end of the last wall and climb on the ledge presented in the picture above (Lara can have problems with doing that - move the analog stick up so you won't stop gripping the wall).

Lara reaches the last location where she encounters Dominguez. Watch a cut-scene during which the man uses all previously collected artifacts. This is the beginning of the final battle in Shadow of the Tomb Raider.

Fight with the final boss (Dominguez) 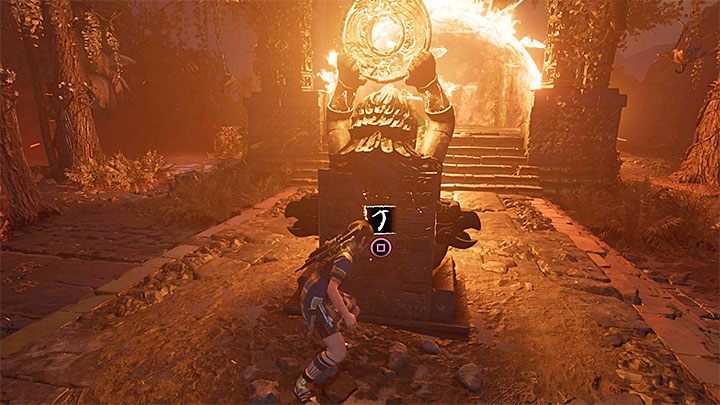 You can spend some time on exploring the area - Lara can apply mud on herself, hide in bushes and near the walls, climb trees and collect spare ammo (its amount depends on your difficulty level).

There are three constructions that provide Dominguez energy - destroy them all. You can do that in any order. Every construction must be destroyed with your axe. 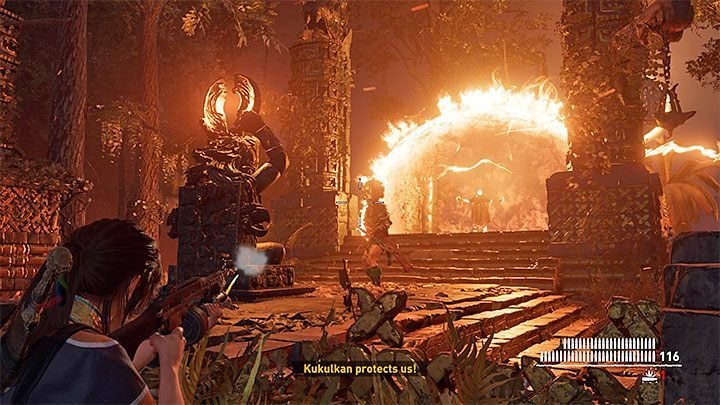 Lara will be hunter by nearby cultists every time you destroy a construction. You can either defeat them or run away and then hunt them down from shadows (i.e. takedowns or Eagle's Talon ability).

Dominguez joins the fight once you destroy all three constructions (this triggers a new cut-scene). 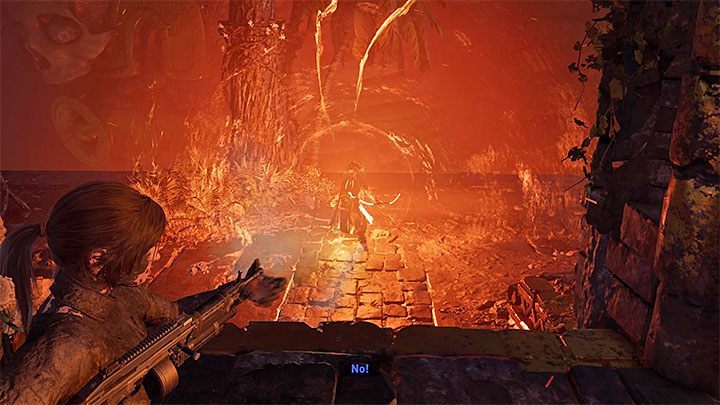 Be on the move and avoid his ranged (he uses a bow) and melee attacks. The boss can deal a lot of damage to Lara when he gets closer to her. Also, Lara will be attacked by regular cultists. Focus on attacking Dominguez - deal him enough damage and you will progress to the next stage.

Deal Dominguez enough damage and he will stand still - see the picture above. Run to him and press the attack button - the same one you have to press to perform a takedown. 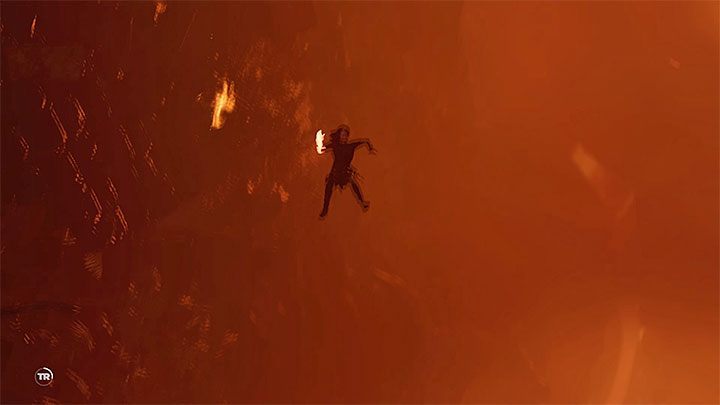 Additional note - Stay away from the "arena's" edges. Otherwise, Lara can be pushed into the chasm by one of Dominguez's attacks. 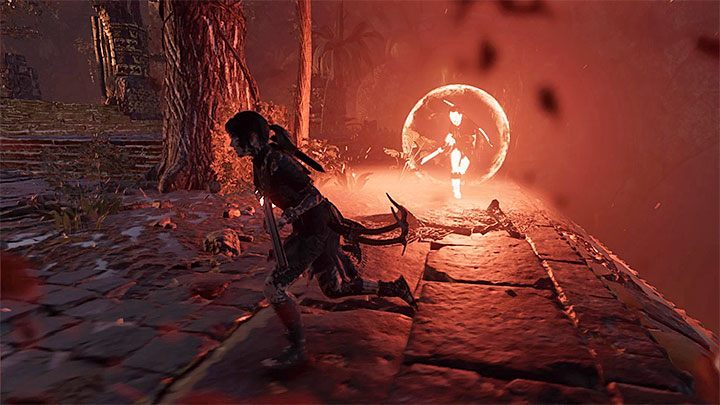 Repeat the actions described above - attack Dominguez from a distance, avoid his attacks and wait for the moment when he gets weakened so you can attack him with a melee attack. Dominguez can now teleport to get closer to Lara. Remember to be on the move and use dodges.

Keep attacking Dominguez when he is in the weakened state. His defeat ends the game. You receive Quiet an Adventure trophy and an additional one that depends on your selected difficulty level.

In the main menu you can choose the option to go back to the game in order to complete remaining side activities or you can decide to beat the game in NG+ mode. New Game Plus mode requires you to start the game from the beginning which means that you will have to look for the secrets again. However, Lara keeps her unlocked abilities and pieces of equipment.