Sneaking in the Shadow of the Tomb Raider is the best method for playing out most combat sequences. This section contains some tips regarding clandestine actions and efficient and silent elimination of enemies. 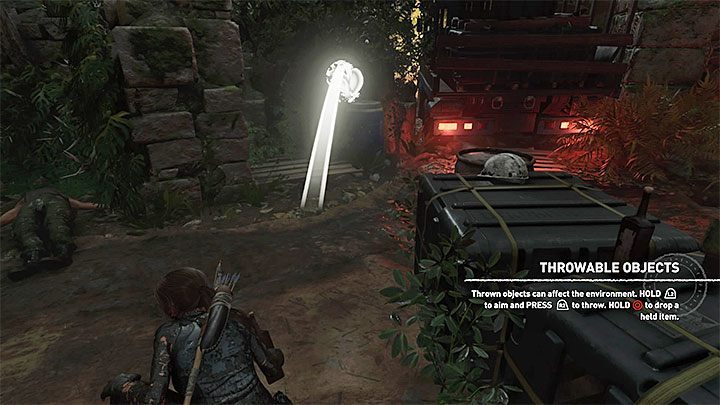 The game allows you to stay hidden during most combat sequences - the enemies usually don't expect Lara. When sneaking, utilize environmental elements, which can help Lara stay hidden. These are mostly bushes and other parts of vegetation. Regular enemies cannot detect you there. Later in the game, you will also be able to climb trees. They also help you stay hidden, but your movement will be limited, unless there are more trees nearby.

Some locations allow Lara to apply a mud camouflage by interacting with mud puddles. Always use this, if it's possible. The camouflage allows Lara to stay hidden, increasing her chances of not being detected. Additionally, Lara will also be able to blend in with muddy walls.

In many locations containing enemies, Lara will be able to find throwable objects. In order to sneak, use these objects for distraction. This can help you to separate the enemies and eliminate them one by one. 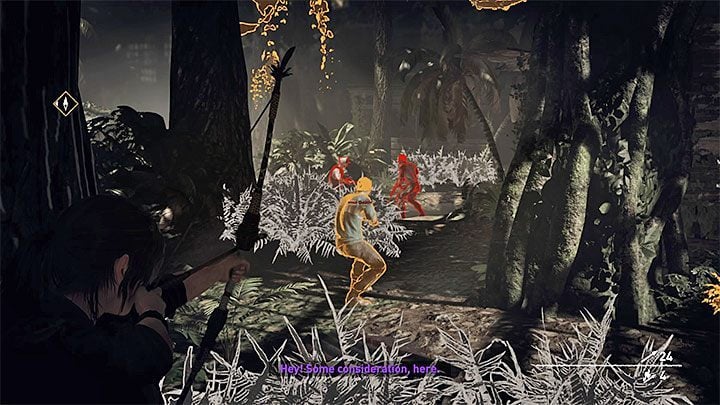 There's no point trying to avoid the enemies altogether in Shadow of the Tomb Raider, since each kill yields some XP. Before doing anything, try to evaluate the situation and use the Survival Instinct (if you can). In the survival instinct mode, enemies that are out of reach of other enemies are marked yellow. Try to target them, as there is a good chance that their death will not be noticed immediately. This way there won't be any alarms triggered.

The best methods in eliminating your enemies stealthy is to perform takedowns and to use your bow. Takedowns are executions performed in melee combat. You can use them when you sneak up on an enemy or when they near Lara (above or beneath). The skull icon informs you that a takedown is available. Try to aim your bow at heads.

Lara can use a few abilities that will allow her to eliminate enemies. The two most important ones are Serpent's Strike and Serpent's Fury. Serpent's Strike makes takedowns noiseless. Serpent's Fury allows you to perform a takedown on two enemies. This is a very useful ability since enemies usually patrol areas in pairs or they stand next to each other. During the campaign, Lara will also learn two new stealth techniques. Eagle Talon allows you to hang enemies on trees. Develop this ability so you will be able to hide hanged enemies in a tree crown. Jaguar's Fear allows you to attack enemies with hallucinogenic arrows. An enemy hit with this arrows turns against his allies. After that this person commits suicide. This is a great way of eliminating groups of enemies without a risk of open confrontation. 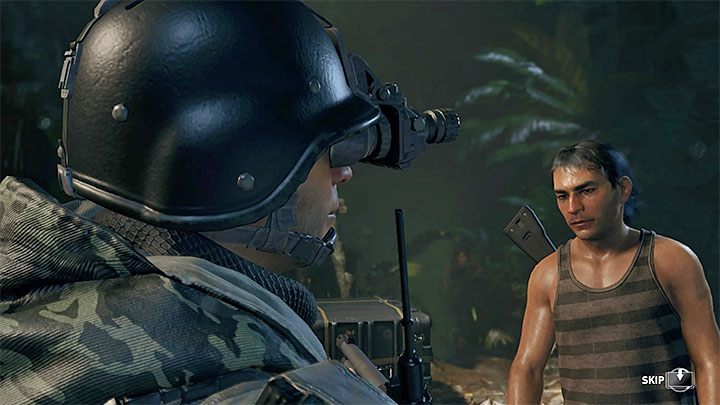 Lara isn't the only one who gains new equipment throughout the game. The same goes for her enemies. Watch out for enemies wearing headgears - they can be worn by heavily armored mercenaries and cultists from Paititi, the Hidden City. A headshot with an arrow won't kill that enemy. They lose their headgear and they enter alarmed state. Use other methods, i.e. takedowns which are deadly to all enemies. Another problem are enemies with thermal vision goggles. They can detect Lara even when she hides in bushes or vines. Approach them from behind or use mud camouflage to protect yourself from being detected.

Once you are detected, you can either fight your enemies or start running. The second option is recommended when you are facing a group of well-armed enemies. Disappearing from enemy sight is your priority. Only then you can try to hide in bushes, vines or other places again. Alarmed enemies patrol the area and they can enter regions that they wouldn't visit otherwise - be prepared for that.