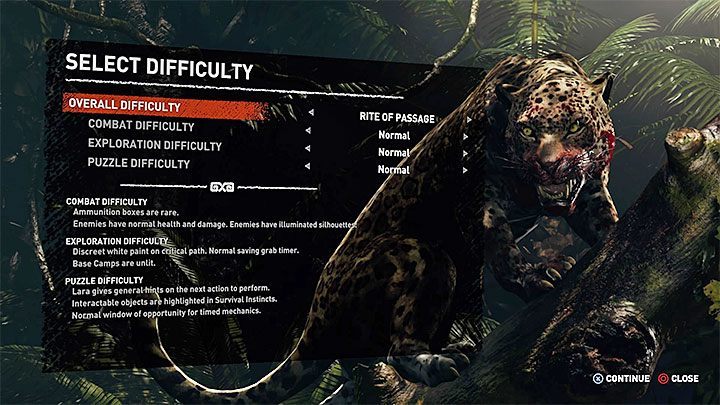 Shadow of the Tomb Raider has an extensive system of difficulty:

Our recommendation for the first playthrough is the Rite of Passage setting:

The highest difficulty, Deadly Obsession, isn't a very good idea if you're completing the game for the first time. Ironically, it's not the challenging fights that will be the biggest problem. Finding interactive ledges, hooks and walls during exploration, as well as location secrets in the game is what's going to be the most difficult. Additionally, on Deadly Obsession dying also means getting back to the last camp, since standard checkpoints are not active. This makes things even more difficult. We recommend leaving this difficulty level for the second playthrough. The most important features of the last difficulty level:

An important detail is the fact that you can change the master difficulty, as well as the combat, exploration and puzzle difficulty at any time in the game - just pause the game and enter options, then select the Difficulty Level tab. Do that only if you really can't overcome some stage of the game. After adjusting the difficulty, defeating enemies will be easier and additional hints for Lara will become available.

Note: Obtaining some of the trophies in the game depends on the difficulty. Changing the main difficulty level during the game can rob you of some trophies. The only way of avoiding that (apart from not changing the difficulty at all) is changing only one of the additional difficulties (combat, exploration, puzzles) and leaving the master setting on the original value.